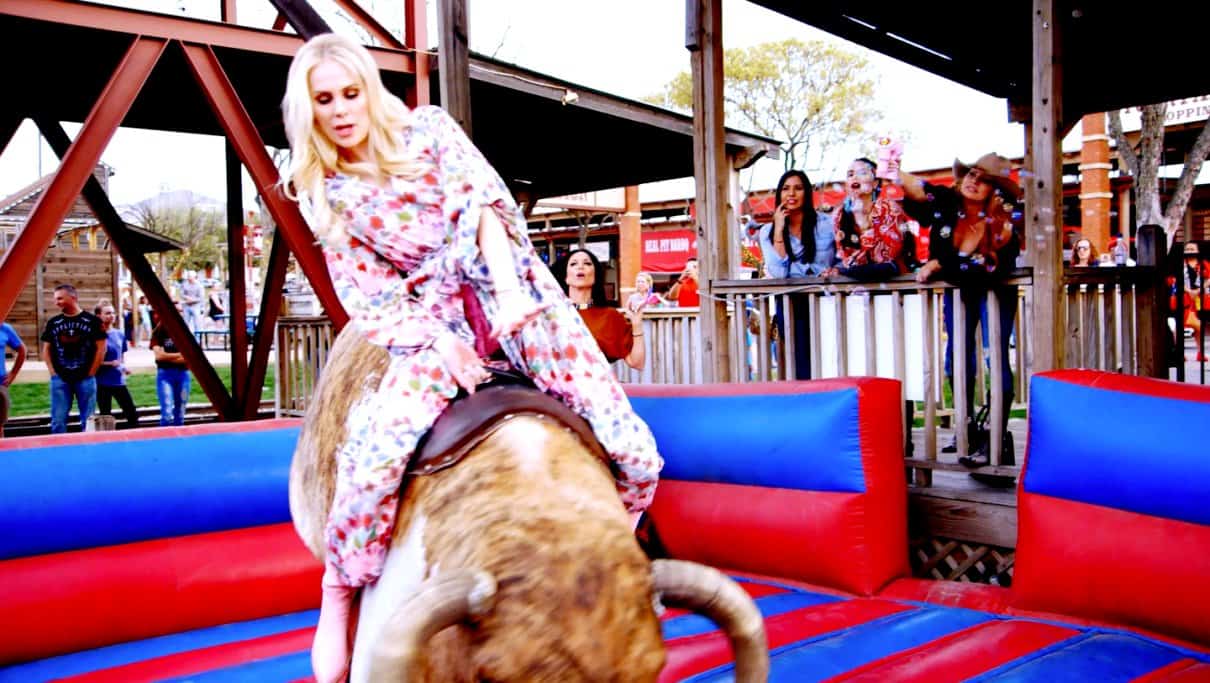 The Real Housewives of Dallas were back at it last night with plenty of Texas sized drama, and a whole lotta bull–literally! There’s a lot to unpack, so let’s get right to it, shall we?

When we picked up with the ladies, they’d just returned from their trip to Beaver Creek, rested and restless.  Kameron was still talking about her ridiculous squabble with Stephanie, and when she described the incident to her husband, Court, he asked if she had been “badgering” Brandi about her adoption.  Interesting choice of words, right? Kameron certainly thought so, but, of course, she said that she wasn’t doing anything of the kind, and continued to tell her side of the story.

Later, Kameron was preparing for an upcoming global pet expo, where she’ll be promoting her sparkle dog food, and hopes to find a distributor before Court cuts off the money he’s been putting into her business. As she was setting up the display, her children helped and played around, as she talked about how exciting the event would be.  She asked her young daughter if she thought the business would be a success, to which she responded, no..because it’s “stupid.”  When Kameron told her that wasn’t a very nice thing to say, and asked the little girl why it was stupid, she shrugged, and replied matter of factly, “it’s pink dog food…” and just like that, little Hilton Westcott officially became my favorite housechild.

Across town, LeeAnne was having a date night with her fiance, Rich.  The ladies’ questions about their upcoming wedding, and when, if ever, it was going to happen were clearly still on her mind, and she was visibly nervous, as she decided to bite the bullet, and ask Rich why they hadn’t set a date yet.  Neither of them is in a hurry to tie the knot, and LeeAnne is starting to wonder if either of them really wants to walk down the aisle at all.

Rich assured her that he did want to get married, and said that they just “have a lot going on right now.”  It’s a tired excuse, and they’ve been using it since they got engaged.  Of course, Rich took the step of “setting a date to set the date,” but LeeAnne was wondering if that was just a stalling tactic.  She admitted that she was afraid to push him into marriage because she thought he might just walk away.

You see, LeeAnne has abandonment issues.  Her mother took off when she was 3 years old, leaving her to be raised by her grandparents, and while they were loving and kind, and modeled a healthy and happy marriage for LeeAnne, she’s spent a lifetime wondering why her mother saw fit to leave her. After all, she reasoned, if her mother could leave her at 3, the most adorable time in a child’s life, why wouldn’t Rich walk away from a 50-yr-old loudmouth b***h?

Rich said he had no intention of leaving, and very much wanted to get married.  To prove it, he proposed to LeeAnne all over again, and told her to go ahead and start planning the big day.  They agreed that once they did that, they would come up with a date “organically.”  LeeAnne left the dinner feeling relieved and confident that she and Rich would soon be man and wife..and then she told D’Andra about it, that is.

D’Andra was unimpressed with Rich’s re-proposal, and it was written all over her face, as LeeAnne sat grinning from ear to ear, filling her in on their romantic dinner.  D’Andra asked if they’d chosen a date yet, and when LeeAnne admitted they hadn’t, she became more certain than ever that Rich was just “playing games” with her friend, and had no intention of making an honest woman of her any time soon.

The talk soon turned to D’Andra’s renewed friendship with Brandi.  LeeAnne warned her that Brandi wasn’t as sweet as she seemed, and to watch her back.  LeeAnne explained that she’d forgiven Brandi for the hurt she caused in the past, but wasn’t going to forget it, and advised D’Andra to take her with a grain of salt.  D’Andra was bothered that LeeAnne was doubting Brandi’s intentions and her judgement, and told her that she was a “big girl,” capable of making her own decisions, but before LeeAnne could argue further, she assured her that she would “proceed with caution” where Brandi was concerned.  D’Andra had a birthday celebration to plan, and she wasn’t going to let LeeAnne bring her down.

On the big day, D’Andra, LeeAnne, Brandi, and Kameron headed off for some rodeo-themed fun, along with D’Andra’s friend Joyce.  Stephanie was still in Italy with her family, and while Cary was back from her own family vacation, she begged off, as rodeos just aren’t her scene.  Besides, there was no Michelin rated restaurants where they were going, and she’s a “bourgie b***h.”

The ladies began the celebration with beer bongs…well, at least D’Andra and Brandi did. They were running around laughing and hugging, and acting like school girl besties, who were only interested in each other.  Kameron and LeeAnne sat regarding them with distaste, and Kameron said that she “would never.”  She hates the taste of beer, although she did admit that she did “champagne bongs” quite a few times back in college, which begs the question, where on earth did she go to school?! LeeAnne agreed that beer bongs weren’t a good look, but when she saw all the fun D’Andra and Brandi were having, she decided to give it a try.  She was clearly feeling a bit jealous, and Brandi said she couldn’t decide whether it was incredibly adorable or incredibly depressing that a 51-yr-old woman was worried about being left out.  She made a good point.

The celebration carried on with some interesting mechanical bull riding and an actual rodeo, all of which included lots and lots of drinks.  As the ladies settled in at a cowboy bar, Kameron and D’Andra began discussing the particular “difficulties” involved in coming from prominent Dallas families.  Kameron said that it came with responsibilities, especially in a conservative town like Dallas, where everyone seemed to know everyone else, but that since she was conservative, herself, she dealt with it just fine.  But D’Andra said she was sick of worrying about who was watching her and what they thought.

D’Andra explained that she’d been a part of Dallas “society” her whole life, and living under a microscope had been tough.  Nearing 50, she’s ready to let loose and live to make herself happy.  D’Andra’s also sick of being under her mother’s thumb at work.  She wants to strike out on her own, and start a her own business, but, as always, she fears disappointing Dee.  D’Andra was near tears as she discussed her dilemma, and Brandi comforted her, and told her that she was sure that her mother would understand once they had a chance to talk.  Then in an effort to completely pull her out of her funk, Brandi presented D’Andra with the very necklace she’d fallen in love with during their shopping excursion in Colorado, but had put back because it was so expensive.

It was a sweet and extravagant gesture, and D’Andra was thrilled.  The two ladies squealed and hugged, and D’Andra thanked Brandi profusely.  LeeAnne couldn’t take anymore, and she and Kameron went off to play some of the games that were situated around the bar.  Both were clearly bothered by this new show of friendship between D’Andra and Brandi, and Kameron wondered if D’Andra was “forgetting where she came from.” She said that Brandi could be “classless” at times, and worried what would come next if D’Andra continued spending time with her.  She was also bothered that Brandi seemed to be literally investing in buying D’Andra’s friendship.  It was a bit over dramatic, but it’s Kameron.

As LeeAnne and Kameron were off playing the games, D’Andra and Brandi sat alone at the table talking, and D’Andra spilled the Texas tea about LeeAnne’s earlier warning about hanging out with her.  Brandi was angry, but not the least bit surprised.  After all, this isn’t her first rodeo with LeeAnne.

As the ladies carried on with the celebration, Brandi watched LeeAnne warily, clearly wondering what kind of game she was playing.  The ladies had more drinks, and LeeAnne closed out the evening by giving  a fully clothed, but very rough lap dance, before getting down on the floor to gyrate and flip her hair around, as Brandi looked on, wondering how it was that she was the one seen as the bad influence.

Well, it seems the old LeeAnne is back…and thank goodness she is (I was beginning to get a little bored)! Scenes from next week show a battle royale between the two queens of the RHOD, as D’Andra finds out LeeAnne’s been telling everyone that she’s secretly broke! Stay tuned!