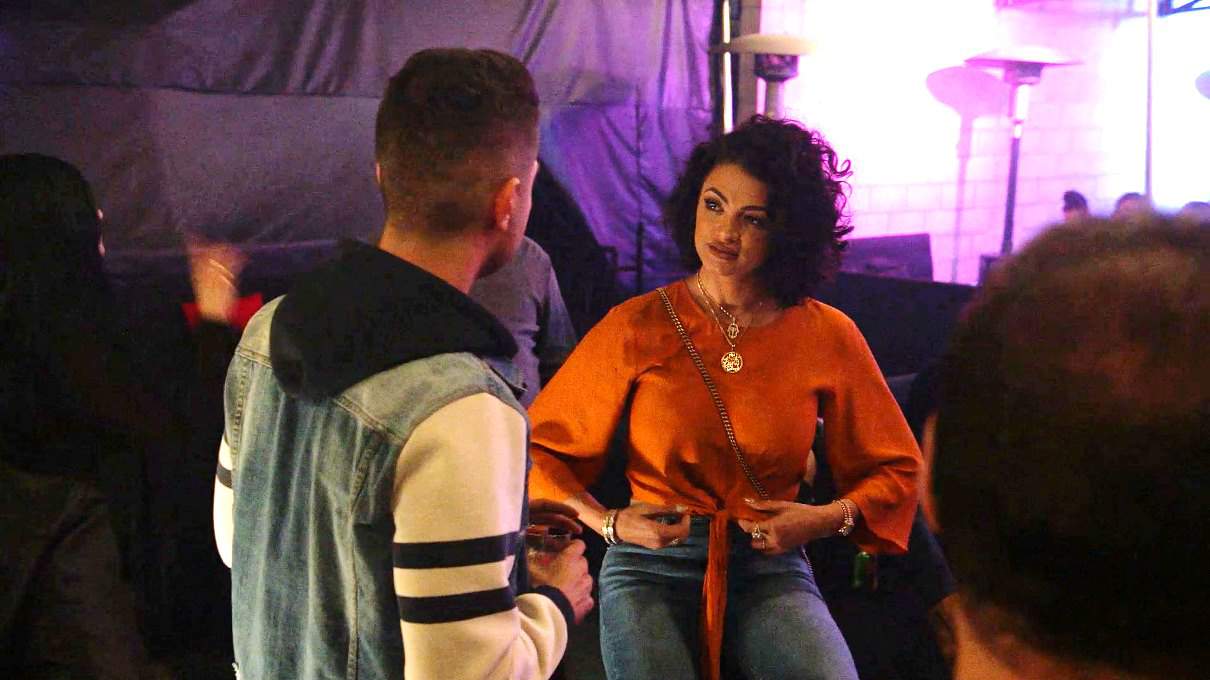 The Persian Posse of The Shahs of Sunset returned last night, and while they were a little light on the drama, it was clear to see that there’s plenty ahead.

We got to know a little more about Destiney, a cast member who doesn’t get nearly the attention she deserves, if you ask me.  She’s going through a lot these days, and it all stems from the fact that she never had a relationship with her father.  During the political unrest in Iran, her father returned to his native country, and never came back to Santa Monica where he’d settled with Destiney’s mother, Tammy, and Destiney’s two older sisters.

Since that time, Destiney has only met her father in person once, and that was ten years ago.  Their meeting only happened after Tammy brought him to the U.S.  But their relationship was always contentious.  As a child, Destiney once denounced her father during a telephone conversation, and the man told her that she was no longer his daughter.  At the time of their one and only meeting, Destiney, desperate to get a glimpse into the life of this man she knew nothing about, took a look inside his luggage, and was shocked to find several different passports, all of which had different names on them.  The discovery only made Destiney’s father more of a mystery.

Destiney’s friends are well aware of how her father’s absence has affected her life, and Reza, especially, can relate.  He, too, had an absent father.  The two men had little contact while Reza was growing up, and he’s determined to break the cycle.  When he and Adam have children, he wants to be hands on, but fears his lack of a paternal example will make that difficult.  He also fears that he hasn’t fully communicated his feelings to his father, and that much has been left unsaid.  Watching MJ deal with the loss of her own father, has made him want to have closure with his, so that when the day comes that he is no longer here, Reza will know that they’ve come to an understanding and have closure.  To help him accomplish that, Reza sought the advice of a therapist, who assured him that simply by having the desire to be there for his children, he’s already breaking the cycle.

Reza wanted to support Destiney as she sought to reconnect with her own father, and was there for moral support as Destiney revealed to her mother that she had hired a private investigator to locate him.  Tammy resisted the idea at first, telling her daughter that her father wasn’t a bad man, but “troubled,” and that she may be opening a can of worms she wasn’t ready for.  But Reza convinced them both that knowing the truth was better than spending a lifetime wondering what could have been.  You see, Reza suspects that Tammy knows far more about her ex husband than she’s ever let on.  I mean, she would have to, right? She was married to the man.  However, when Destiney finally met with the PI, we discovered that she actually had no idea how long her parents were married, or whether he had any surviving family, or the story behind what he was really doing with all those passports and aliases.  Finding him is clearly going to be difficult, and Reza said it was no wonder Destiney cried each time she spoke about him…with so little to go on, it’s pretty much all she can do.

Of course, having both parents present in your life comes with its own set of issues, which Mike knows all too well.  He’s desperate for his parents, especially his mother, Sue, to finally accept the woman in his life.  They certainly weren’t satisfied with his ex wife, Jessica, despite the fact that she converted to Judaism prior to the wedding.  Now, he’s concerned that they’ll have the same level of disapproval with his new girlfriend, Morgan.  Poor Morgan.  She’s trying her best to be the woman Mike wants and needs in his life, and if he gave his mother half a chance, and quit hiding them from each other, Sue would probably adore her.  She’s a sweet girl, and I do mean girl.  She’s nearly 20 years younger than Mike and his friends, but the way this crew carries on, you’d never know it.

Mike’s friends are also getting tired of Mike treating her like some sort of dirty secret.  If she’s going to be his girlfriend, they feel that he should actually let her into his life.  He left her out of the Nowruz celebration last week, and now he was talking about leaving her out of the group’s trip to Vegas for MJ’s bachelorette party.  So MJ didn’t give him a choice, she took the initiative and invited Morgan, herself.  Mike wasn’t particularly happy about it.  After all, this was supposed to be an opportunity for the core group of life long friends to get “turnt up,” not to spend time with significant others.  MJ’s fiancee, Tommy seemed to understand that.  He said it was her weekend, and he’d already had his bachelor party–a few actually–and didn’t want to be in the way.

After the crew enjoyed a special Passover meal, prepared exclusively by Morgan, with no help, whatsoever, from Mike, he finally deigned to invite her along on the trip, although the gesture was luke warm, at best.  But Morgan was thrilled to finally be included, and agreed to join them for only part of the trip, a decision she may come to regret based on the previews.

It seems the only member of the cast, who is feeling completely fulfilled is GG.  She really seems to be enjoying her life post-divorce, and is loving being a “boss.”  She’s starting a cannabis business (legal, of course) and after misspending her youth getting kicked out of private schools and getting arrested at the tender age of 15, she’s finally enjoying making her parents proud.

Nema’s proud of her too, of course.  That man follows her around like a puppy dog, and just can’t seem to get enough.  He’s even helping her to promote her business, and is sure that once “Golnessa” shines through, the world will fall in love with her, and she’ll “make billions.”  GG is pretty smitten with Nema, as well.  Or, at least the idea of him.  He feeds her ego, but then again, she’s GG, so what doesn’t feed her ego?! She likes playing with him and flirting with him, and also had a little fun flirting with his friend right in front of him.  Of course, once she found out the man was only 25, she backed off, as she’s not quite ready for “cougar” status yet.  Maybe they should introduce him to Morgan—she may be back on the market soon!

Be sure to tune in next week, as the SHAHS get turnt up in Vegas because what happens on this trip will absolutely NOT stay there!