The Real Housewives of Dallas Recap: Babes in BrandiLand 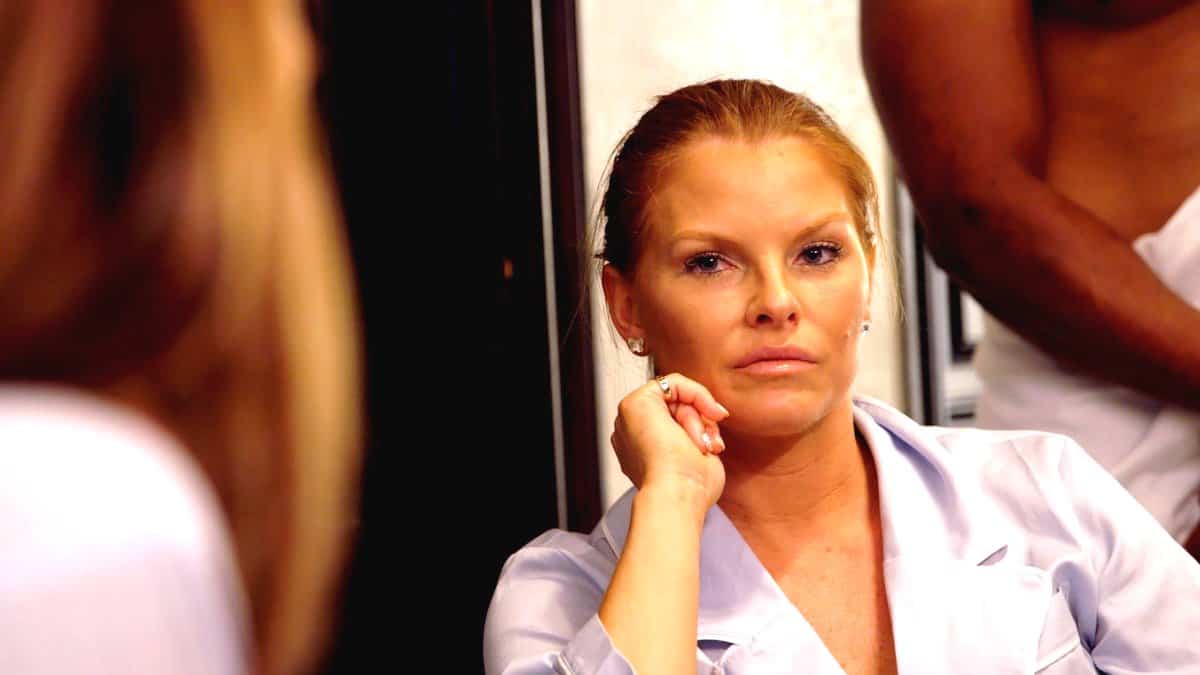 Okay, so here’s the thing about the ladies of The Real Housewives of Dallas — they have WAY too much time on their hands.  Somehow, I think if the each got a hobby (or spent a little more time running their various “businesses”) they might be too busy to be getting their panties into a bunch over such trivial matters.

When we picked up with the ladies last night, Stephanie and Brandi were busying themselves planning Stephanie’s upcoming spa party.  Ok, well, actually “busying” and “planning” may be a bit of an exaggeration.  Basically, they sipped wine and oohed and ahhed while auditioning the male models Stephanie was hiring to provide the eye candy for the event, including one painfully scrawny young man named Chase, who was hired because he brought along an adorable baby kangaroo. Now if it were me, the diaper clad marsupial would have been at the top of the list of reasons I DIDN’T hire him, but I digress.

Across town, LeeAnne was preparing for a photoshoot that would feature her “infinity dress,” which, if you can believe it, is one dress that can be worn 175 ways.  It’s really cool and an absolutely genius idea.  You know, almost like Kameron’s pink sparkly dog food idea, except not at all. But you couldn’t tell Kameron that.  According to her, she and LeeAnne are both “visionaries.” Yes, she actually used that word. I just can’t.

Anyway, as “visionaries” so often do, they gossiped about the most recent drama among the ladies — D’Andra being upset about LeeAnne telling Cary she only had $200 in her bank account.  LeeAnne continued to insist that she was “concerned” about D’Andra, and that since Cary was D’Andra’s friend too, had hoped that the two of them could work together to come up with a way to “help” her (yes, she actually said that–and with a straight face too).  She added that she felt D’Andra’s reaction was a bit over the top, and that she was “putting on a show” with her tears at the smash party.

Kameron agreed, but was far more interested in the part Cary played in the whole thing, and pointed out that it was further evidence of what she’d thought of Cary all along — that she often ‘plays both sides.’  She said it was certainly Cary’s MO during their trip to Beaver Creek, when she told Kameron that she’d done nothing wrong, and that Stephanie had been wrong to use the word “bash” in regards to Brandi’s adoption, but then had turned around the next morning, and told Kameron that she owed Stephanie an apology for overreacting.

Later, the ladies got together at Brandi’s trunk show for her resort/loungewear line, BrandiLand.  D’Andra and Cary arrived together, and Cary showed D’Andra her handbag’s “raincoat,” which, according to her, is “proper handbag etiquette,” as your “girl” should always be properly protected in inclement weather.  Silly me. I just let my purse be exposed to the elements, as though it’s an inanimate object, or something!

Inside the party, Brandi gave everyone a BrandiLand design to wear, as it’s also proper trunk show etiquette to actually wear the designer’s fashions, something only Cary knew in advance.  That girl should start an etiquette blog, or something.

Even with all the socializing and outfit changing, Kameron hadn’t forgotten for a single second that she was angry with Cary for her fence riding, and pulled her aside to tell her so.  She explained to Cary her issue in Beaver Creek, and when Cary tried to defend herself, and held up her finger, saying “listen,” Kameron cut her off, and said that she was “pointing a finger at her,” and that she didn’t like it.  It was all starting to get a little heated, and Cary called Stephanie over to join them so that she could tell them that she hadn’t been “playing both sides” in Beaver Creek.

Well, Kameron wasn’t having that! She accused Cary of bringing in her “posse,” and said that the issue actually had nothing to do with Stephanie –and you know what? She was pointing at them both the whole time! Stephanie had no idea what was goin on, but said it was par for the course that Kameron would only become more upset when she became involved.

Across the room D’Andra was speaking to LeeAnne, and joked about having no money to buy anything at the trunk show — but then it got real serious, real fast.  LeeAnne began crying, and said that she hated that she had caused D’Andra any pain, and would rather hurt herself than her “bestfriend.”  It was pretty good acting on LeeAnne’s part, but D’Andra wasn’t buying it.  She said that LeeAnne had an amazing ability to produce crocodile tears, and while she didn’t confront her directly, she said during her confessional interview, that the whole ordeal had been a ploy on LeeAnne’s part to get everyone talking about D’Andra instead of her own issues with Richard.

Cary apologized again, and said that if Kameron was ever threatened by any of the ladies with a sex toy again, she’d be right there to stop the shenanigans in their tracks.  In fact, she said, while they had been in Beaver Creek, Brandi had bought a pair of “Stressticles” to tease her with, and she had told her to knock it off, and not chase Kameron around with them.  Kameron was touched by Cary’s display of loyalty, especially when she brought Brandi over to confirm her story of heroism in the face of plastic testes.  Brandi wasn’t exactly convincing, and seemed oddly upset, but she backed Cary up, all the same, and Kameron seemed none the wiser.  All was right with the world once again–at least it appeared to be.

After everyone else left the trunk show, Stephanie went over to say goodbye to Brandi, and could tell her bestie was harboring some bad feelings, and convinced her to tell her what was wrong.  After a few minutes, Brandi admitted that she was, indeed, a bit upset at Cary, whom she said lied about telling her not to bring out the “Stressticles.” In fact, Brandi said, she decided all on her own that they were a bad idea, and was tired of being called the inappropriate “bad influence” among the group.

As Stephanie watched her friend break down in tears over this trivial matter, she was convinced that this was not all about rubber balls.  Brandi was clearly overwhelmed with the trying to take care of a new baby, her two daughters, her husband, and her fledgling business, and the stress of trying to “do it all” was getting to her.   She wisely advised Brandi to ask for help, and that it was okay to relax sometimes and let someone take over.  Her spa party couldn’t have come at a better time.

As the ladies reconvened at Stephanie’s house for a day of pampering, and petting a diapered baby kangaroo, in Stephanie’s over-the-top bathroom, complete with a toilet that boasted “six different ways to please” whomever was lucky enough to sit upon it, Brandi still had her status as “bad influence” on her mind, and brought it up to Cary, as they sat getting manicures.

Cary admitted that she had embellished her story of loyalty to Kameron to calm her down, and apologized for throwing Brandi under the bus.  Brandi accepted the apology, but continued to wonder how she somehow came across as the bad guy in Kameron’s eyes when it was perfectly acceptable for LeeAnne to give D’Andra a lap dance during her birthday party, and mop the floor with her hair.  Cary was finding herself in an awkward position, once more.  She’d warned the other women that there would be “no more secrets,” and that if they talked trash about one another, she’d be blowing the whistle–and she was going to have to tell LeeAnne and Kameron about this to ensure she wouldn’t somehow be stuck in the middle of yet another drama.

In the meantime, LeeAnne and Stephanie were discussing the matter as they got massages.  LeeAnne was happy to be alone with Stephanie, and felt that she was finally getting to know her on her own terms.  In the past, she’d felt that Stephanie’s perception of her was Brandi’s, and the two of them have been bonding ever since they shared their stories of bouts with depression.  She confided that she felt that Brandi was the one who was in the wrong in this situation, and that Kameron actually was very accepting of her.  In fact, she said, she felt that it was Brandi, who judged Kameron too harshly at times.  Stephanie clearly didn’t completely agree with this assessment, but kept her feelings to herself.

Well, there you have it.  The ladies of RHOD will make drama out of anything–even during spa treatments.  And the drama is just getting started! Scenes from next week’s episode show Cary spilling the tea about Brandi’s comments about LeeAnne, and D’Andra bringing up rumors of Richard’s supposed infidelity! Stay tuned!