The Real Housewives of Dallas Recap: D’Andra Explodes on LeeAnne for Telling Others She’s Broke 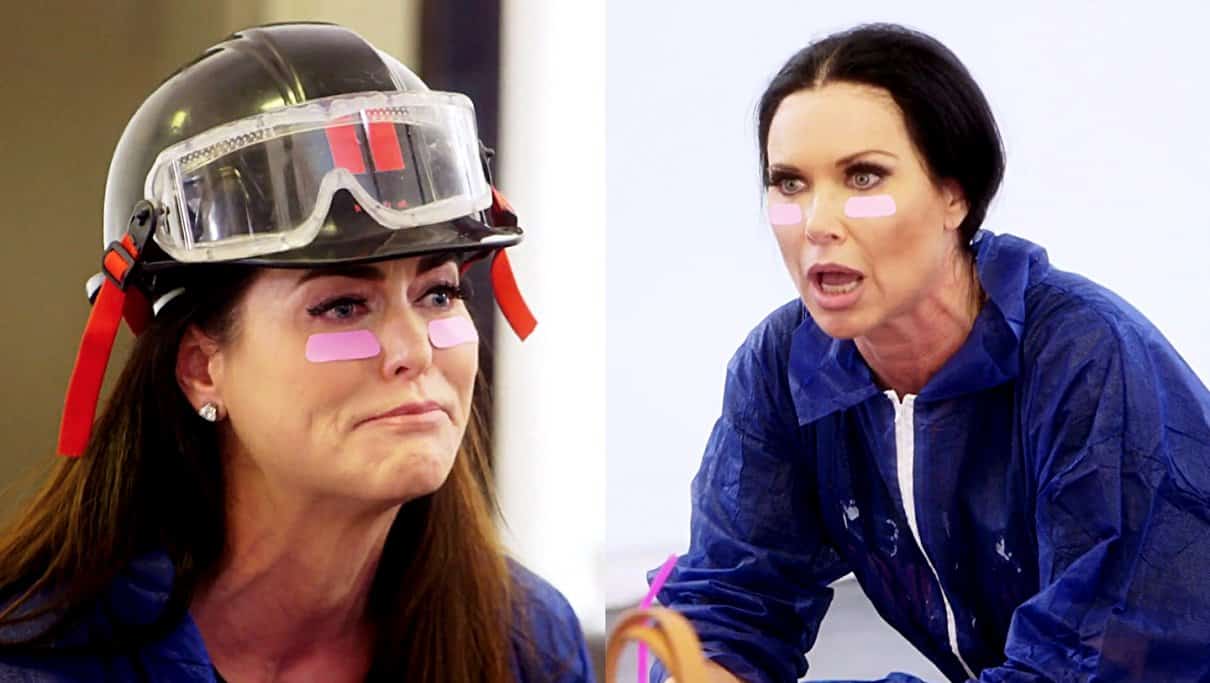 The ladies of the The Real Housewives of Dallas were back last night, and they all had a lot going on.

Brandi was getting ready for a visit from the social workers, who will be giving the all clear to finalize the adoption of Baby Bruin, and her little girls, Brinkley and Brooklyn, were not cooperating…at all! They seem to love their little brother, but they’s as sassy as their mama, and they’re not afraid to show it, so if you don’t want to hear what they have to say, it’s probably best not to ask.

Kameron was making plans to finalize her next moves, as well.  She took off to the Global Pet Expo to pitch her sparkle dog food to the big wigs.  She’s got something to prove–especially to her husband, Court, who has told her that he’s cutting off the money train if she can’t find a distributor, and make a legitimate go of the business.  Kameron was feeling mighty independent as she made her way to Orlando.  She was even flying commercial, and leaving the Westcott PJ (that’s rich people talk for private jet) in its hangar.  She was at a bit of a loss, and had to check with Court a few times about exactly how traveling with the unwashed masses works, but she managed to make it there and back in one piece, and proclaimed the pet expo a smashing success.

And speaking of smashing, LeeAnne had a great idea for an outing for the ladies…an “Anger Room,” where they could take out their frustrations by breaking things.  It turned out to be a good idea too, because by the time the episode was over, most of the women had plenty of reasons to want to break things.

D’Andra was just stressed all the way around.  She’s at a crossroads financially, and can’t seem to figure out exactly the best way to proceed.  She comes from a wealthy society family, and has a big, important name, but she’s ready to strike out on her own, and get out from under her controlling mother, Dee.  But there’s a hitch in the giddy up.  For starters, her mother owns the parent company of her business, and therefore controls the purse strings.  If D’Andra wants to take her company and make it on her own, she’ll be starting from scratch..no money, no company car, no maid, no nothing.  If that weren’t bad enough, her mother is also the executor of D’Andra’s stepfather’s estate, and while he left D’Andra with enough money to be quite comfortable, it’s not enough money to live in the style to which she’s become accustomed and kick off her business.

D’Andra discussed her money woes with LeeAnne, who decided to give her some tough love.  After all, D’Andra had dealt out the truth to her when it came to her relationship with Rich, so LeeAnne gave it right back.  LeeAnne said that D’Andra was “spoiled,”  and that she liked it that way, and that it was time to put on her big girl pants, stop being so “lazy,” and do what she had to do for herself.  Unsurprisingly, D’Andra did not care for this straight no chaser conversation, and felt LeeAnne was simply being harsh and “judgmental.”  And D’Andra fears judgement most of all.  She’s genuinely concerned that she will be shunned by Dallas society now that her pocketbook is a little lighter.  It may be well past time for her to tell “Dallas Society” to shove it, if you ask me!

She hoped that Cary might have a lighter touch, so she went to her for some advice.  Cary, of course, told her that her true friends wouldn’t be worried about how much money she had, and wouldn’t be gossiping about her life or her finances.  Well, except for one.  Cary informed D’Andra that she knew all about her financial woes because LeeAnne had already told her.  In fact, according to LeeAnne, D’Andra only had $200 to her name!

Well, that’s a bit of an exaggeration, and D’Andra was absolutely humiliated to discover that not only was LeeAnne sharing something so private, but that she was embellishing it, as well.  She vowed then and there, that when they went to the anger room, LeeAnne would be sorry she had every talked about her.

But it seemed it would be difficult for LeeAnne to feel sorry about anything, as she was on cloud nine, making wedding plans with Rich and her bff/wedding planner, Steve.  They discussed an actual date, but only managed to narrow it down to a specific month–November, which is actually quite a lot of headway for these two.  Steve also told Rich that he would be planning his bachelor party and that it would be fabulous! After all, Stormy Daniels may make an appearance.  My, my, my—what will the president say?!

When the ladies gathered in the Anger Room, LeeAnne was wearing an odd wig and a mustache, but no one could figure out exactly why.  She eventually took it off, and explained that they all hid who they really were inside behind a facade they showed to the outside world, and that she hoped that this outing would be a lesson to all of them to be real with each other.  Not sure why she needed a mustache to make that point, but LeeAnne loves a costume!

D’Andra took LeeAnne’s little speech as an opportunity to put her feelings out on the table.  She said she was “always real,” and never spoke about people behind their backs, “unlike some people.” Good grief! Are they in 7th grade?! You’re nearly 50 yrs old, darlin’, just speak your mind!  And boy did she! Once the flood gates were opened, D’Andra  started crying and screaming about what LeeAnne had said to Cary, explaining that it wasn’t even true, and how humiliating it was that “all of Dallas” thought she only has $200.

The other ladies tried to make her feel better. Kameron tried to comfort her by saying that she hadn’t heard anything of the sort in the streets of Dallas high society.  Stephanie seconded Cary’s sentiments, and assured D’Andra that her true friends wouldn’t judge her over such superficial matters, and Brandi reminded her that she had grown up in a trailer park, and was in no position to judge anyone, which gave everyone a much needed laugh.

LeeAnne told D’Andra that she hadn’t been being malicious or gossipy, but was simply concerned about her when she came back all upset about the money she spent shopping while they were in Colorado, and had shared it with Cary because she knew they were close, as well, and thought maybe Cary could help.

But LeeAnne couldn’t help being angry at Cary for sharing their private conversation with D’Andra.  Cary told her she’d kept private conversations to herself before, and never told anyone what anyone else was saying about them, and had gotten bitten on the backside, so from now on, she was telling everyone what everyone else said.

After the ladies finished smashing mirrors and plates, and were about to leave, Brandi wondered aloud whether or not she should confront LeeAnne about warning D’Andra to “proceed with caution” in their renewed friendship.  Stephanie told her she should.  After all, confrontation seemed to be the theme of the day.

When Brandi brought it up, LeeAnne explained that she never said that D’Andra shouldn’t be her friend, just that she had gotten close to Brandi, herself, and had gotten hurt, so she should be careful.  She added that she was ready to move on, and had no hesitations about being close with Brandi again.  D’Andra said that wasn’t true at all, and said that LeeAnne did tell her that she should watch her back, and that Brandi couldn’t be trusted.

At this point, Kameron piped up to say that she, too, had concerns about D’Andra and Brandi’s friendship, and felt that Brandi might be a bad influence.  She explained that D’Andra never would have done those “butt shots” with the k cup on her own.  Except she had done it on her own.  Brandi had nothing to do with it, and besides, it was a joke among friends, not some debutante ball, and Cary was quick to speak up and say so.

At that point, D’Andra couldn’t take any more tension.  She walked away, and said she was “tired of this.”  Thank goodness! I was getting a little tired of it, myself, if I’m being honest.

Luckily, the show faded to black at that point, but the ladies will be back with more RHOD drama next week.  LeeAnne and D’Andra still aren’t finished arguing about how much money D’Andra really has, and Cary and Kameron are going to exchange some pretty harsh words, as well. Stay tuned!