90 Day Fiance: Before the 90 Days Star Ricky’s Wife Exposes His Fake Storyline and Lies to Ximena! Denies Being Involved in Plan to Fool Ximena 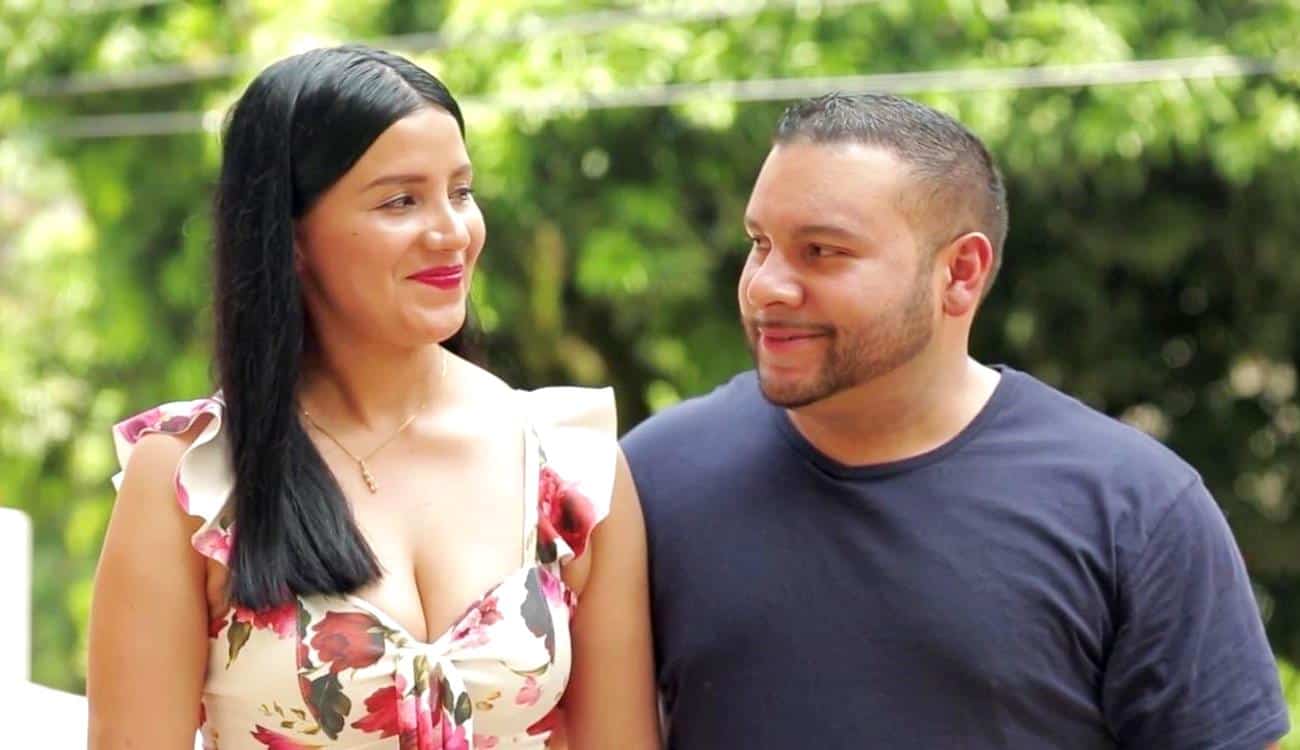 There is drama brewing with one of the stars of 90 Day Fiancé: Before the 90 Days that has led to viewers questioning the authenticity of the show.

Reports have surfaced that one of the stars of season 2, Ricky Reyes, who is still legally married to his second wife Natalia, may have faked his storyline and gone on the show for the sole purposes of promoting his film production company.

If you recall, Ricky went to Colombia to find love with Melissa before his infamous switcharoo to Ximena Parra happened. And on the most recent episode of Before the 90 Days, viewers saw Ricky become engaged to Ximena, who said yes to his proposal, despite still being married.

Then came a report which stated that production sources from the show accused Ricky of not being separated from his wife Natalia, alleging that Ricky and Natalia concocted a plan for Ricky to create a fake storyline in order to appear on the TLC hit series and garner publicity for his film and photography production company – Crown Film Productions.

This would explain why Ximena and Ricky are no longer together today despite the fact that we revealed Ximena is currently attending college in Florida in the Ricky and Ximena spoilers we posted, after moving to the United States earlier this year.

Since the reports surfaced, Natalia has now taken to social media to defend herself and set the record straight as she denies any involvement in Ricky’s reported attempt to scam Ximena and the audience. Natalia shockingly acknowledges that Ricky did indeed lie to Ximena and TLC, but she claims she was also a victim of his lies.

Natalia shared her side of the story after a moderator for Reddit’s 90 Day Fiance forum, Katie_Not_Holmes, called out Ricky for trying to hook up with both her and another woman only a few weeks ago.

“Let me make one thing clear, I was not involved and never will be in this show,” wrote Natalia on Instagram. “I knew he was going to Colombia, I was told the day before our anniversary, when I was already living somewhere else, that he was moving on. Had I known it was to this magnitude, I would have prepared myself.”

She continued, “After his trip, there were lots of regrets and promises, so blame me for being dumb – but that is all I was. I gave a man I loved another chance. Now you throwing these things in my face, the infidelity, the lies – does it bring you peace? I am sorry for what you’ve been through, but please let me be – I am trying to move on with my life.” 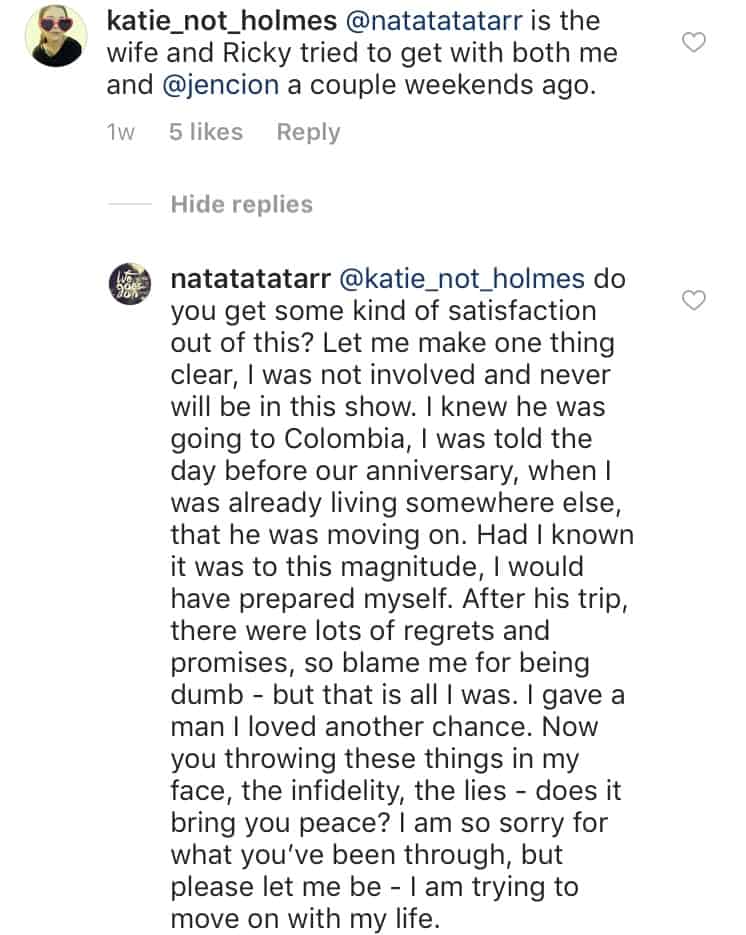 Reality TV blogger John Yates also accused Natalia of intentionally hurting Ximena and even went further to call it criminal. Natalia however denied any wrongdoing once again, and hinted that Ricky tried to reconcile with her following his trip to Colombia. This isn’t good for Ricky as he proposed to Ximena before leaving Colombia even though he was still married to his ex…who he then tried to get back with. Are you as confused as we are?

“I did nothing to Ximena. As soon as I saw the direction he had for the company, I stepped away,” Natalia wrote. “There is not enough money in the world to justify doing that to her, or putting myself through this. Now- did he have feelings for her? 100 (percent) but as we have seen, his feelings change rather quickly. I read the article that I was involved- it’s nonsense. As soon as I found out he was going, I emailed TLC to tell them he was married, how they chose to proceed with this is beyond me.” 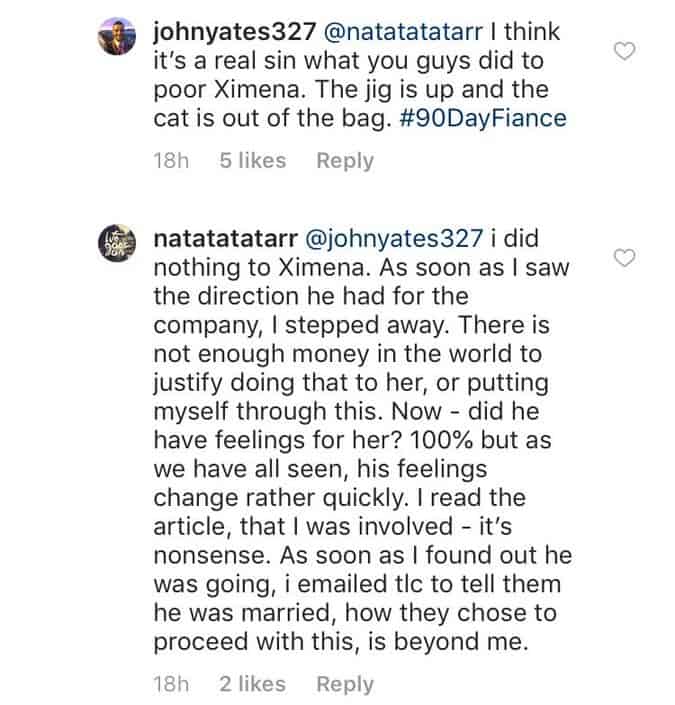 The original report that exposed Ricky alleged scam stated that Natalia was aware of Ricky’s plan to fool Ximena, but he wasn’t supposed to sleep with her. As viewers are aware, Ricky did in fact end up sleeping with Ximena in Colombia which allegedly made Natalia very upset.

We also went back to watch the season 2 premiere episode of Before the 90 Days, and Reality Blurb can confirm that Ricky did say he and his ex “are in the process of getting a divorce.” Still, if his wife’s version is to be believed, it would appear that was a lie as they were still working on their relationship before and after he filmed the show.

While we have to patiently wait for the reunion, you can tune in tonight at 8/7c on TLC to watch this drama unfold.

TELL US – THOUGHTS ON RICKY’S ALLEGED SCHEME AND HIS WIFE’S DENIAL?