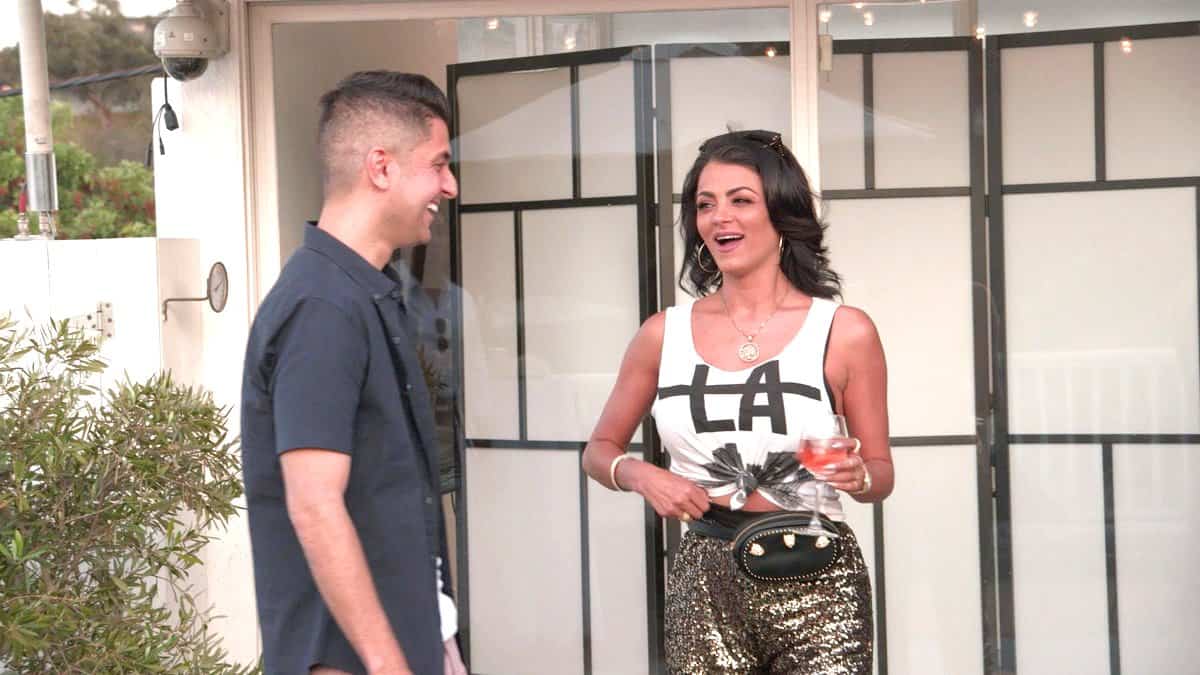 Shahs of Sunset returned with a new episode last night, and as is always the case with this crew, there was plenty of Awww, and just as much OMG! But that’s why we love them—am I right?

When we picked up with the Persian Power Posse, Mike was still working on his investment property–and still working Reza’s nerves.  He’s convinced that this piece of real estate will have him and his family living large for generations to come, but Reza wasn’t too convinced.  He encouraged Mike to sell–and fast, rather than stay tied up in it, and deal with the potential headache of renters, but Mike seemed so hopeful and determined that Reza finally agreed it was a great investment.  He remains cautiously optimistic, though, and is pretty sure he’ll be doing plenty of the work.

MJ is cautiously optimistic, as well–about her marriage.  She and Tommy met with their attorneys to discuss prenuptial agreements because well, you never know.  MJ has proclaimed herself the “Susan B. Anthony” of prenups, and says she’s rewriting California divorce laws to favor women.  This basically means that, should they divorce, Tommy will walk away with little more than the shirt on his back–literally.  She’s even threatened his um–manhood, if you will, but Tommy said he was fine with her demands because he’s not going anywhere.

MJ also has babies on the brain.  She met with her fertility doctor, who gave her amazing news.  She has a healthy embryo that he told her was ready for transference soon.  MJ felt she’d beaten the odds, and found happiness, and that she no longer needed to worry about being “punished” for waiting until later in life to start a family.  She vowed to be an amazing mother, and to give Tommy the happy family he’d longed for since childhood.

As for Destiney, she’s been longing for a relationship with her father since childhood, and she met with her mother to tell her that the private investigator she’d hired to find him may have a lead.  As she may be getting one step closer to finding him, she told her mother that if she ever did get the opportunity to sit down with him face to face, she wanted her by her side through it all.

Nema and Mona can certainly relate to this.  When the siblings’ parents divorced, they were only 2 and 4 years old, and were forced to choose who they wanted to live with.  Mona “chose” her mother, and not wanting his father to be alone, Nema chose to stay with their father.  As a result, they grew up separately, not really knowing each other or their other parent.  We met their mother, who was visiting from the east coast, last night.  They clearly love her, but as Nema told her about his recent break up with Erica, he explained that growing up without the two most important females in his life had left him more than a little skittish when it came to relationships with women as an adult.

His mother broke down in tears, as she blamed herself for Nema’s romantic troubles, but he assured her that she needn’t feel guilty.  It was just something he had to work through, and besides, it’s not as though his mother made him flirt shamelessly with GG while his girlfriend was waiting at home.

Speaking of shameless relationship issues, I’ve gotta say, I love me some Reza, but I’ve been a little disappointed with how he’s treated his husband, Adam lately.  It seems he’s always throwing money in Adam’s face, and complaining about the fact that “he’s” paying for everything.  They’re married! What’s his is Adam’s and vice versa.  But for some reason, Reza just doesn’t see it that way.  The expense involved with finishing their fabulous new home clearly has him stressed to the max, and he’s taking it out on Adam.  Of course, it doesn’t help that Adam wants a baby–NOW, and has been putting the a lot of pressure on Reza to get the process started.  But that’s not cheap either.  The cost of surrogacy can be prohibitive, and Reza has told Adam many times that he feels that they need to be in a much better place financially before they begin the process.

Adam paid a visit to Asa’s boutique to shop and vent, and hear all about her life as a new mother.  She’s incredibly happy–especially now that the baby is sleeping through the night.  When Adam brought up his struggles with getting Reza on the baby train, Asa pulled off the band aid, and told him that perhaps Reza didn’t actually want children, at least not right now, and that forcing the issue wasn’t going to do anything but push him away, and leave them both unhappy.  She advised him to have a much needed talk with Reza, and softened the blow with a $700 hand knitted blanket from her store. Reza agreed that it would be nice for their kids to grow up together, but said that they were not going to push things along to keep up with Asa.  Once again, he told Adam to put the brakes on the baby talk–at least until their new house was finished and their condo was sold, so they had a bit more of a financial cushion.  Adam seemed to finally get it. Besides, they sort of got a new baby last night, after all.

Later on, MJ and Tommy had a small gathering to celebrate their upcoming wedding, which is only a few weeks off! Mike arrived bearing gifts of appreciation and love for his friends–flowers for the ladies, and for Reza, an absolutely beautiful, fuzzy little black and white Persian kitten named Woody.  He won’t replace Buzzy, Reza’s cat that passed away after 16 years, of course, but he certainly went a long way toward cheering him up!

And GG made great strides in moving forward.  She and Nema are still constantly flirting, and were even dancing (not so subtly) around the issue of taking their friendship to the next level. But GG’s still wearing her wedding ring, and her friends are still giving her crap about it.  During the party, against Vida’s advice, she chucked it into the pool, where it sank unceremoniously to the bottom.

Of course, that was only the band, the huge diamond sparkler stayed put.  But it’s just for show.  In fact, Shervin drove her downtown to the courthouse, where she filed for divorce once and for all.

Well, the Shahs are moving on and moving up.  And through it all, they’re bringing plenty of drama.  They’ll return next week with more where than came from–stay tuned!