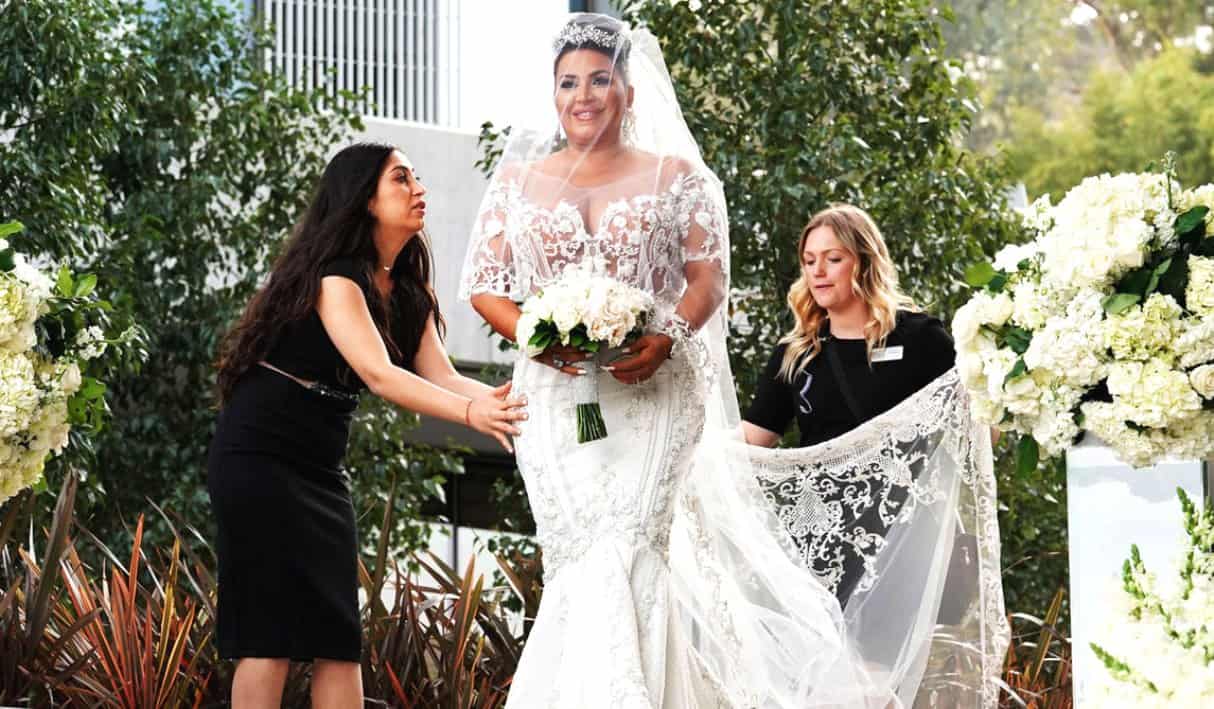 Well, Shahs of Sunset fans, it’s official! Miss Mercedes “MJ” Javid is now Mrs. Tommy Feight, and just like the bride and groom themselves, the nuptials were a little naughty, and A LOT irreverent, but I have to say in all the perfect, traditional, and truly beautiful weddings I’ve witnessed, where the bride showed up on time, and the groom didn’t wear Jordans, none were as full of true love as this one.  Of course, for a minute there, it didn’t look like it was going to happen at all…

With just a few hours left before the wedding, MJ was at her house having a nice leisurely swim in the pool, while her childhood friend Kerry begged her to come on and get ready.  She was getting married for goodness sake!  But MJ insisted it just wasn’t going to take that long to pull a dress over her head, which under certain circumstances may be true, but as the hours ticked by, MJ still hadn’t even seen the finished version of her dress!  That’s right, the dress hadn’t been exactly right when she saw it a few weeks back, and they were still working on making some changes.  I’ve heard of procrastinating–but come on!  And just like we’ve all been told since we were children, procrastinating is always a bad idea.  When the finished product finally did arrive, it didn’t fit!

Now for most brides, this would be an unmitigated disaster, and I really thought this would be the moment when MJ would go full on bridezilla, but our girl took it in stride.  Her dressmakers removed the dress and got back to work, while MJ’s makeup artist, Marina, got to work on her face.  Of course, one of the reasons that MJ was able to remain so calm throughout the biggest day of her life is that her mother, Vida, was there to get worked up enough for both of them.

As usual, from the moment Vida arrived, she had complaints.  She absolutely hated MJ’s makeup, which she immediately decided was too dark, too heavy, and made her look like “wood.” And, as usual, Vida wasn’t wrong.  The makeup was a bit much, especially for a wedding.  But MJ herself is a bit much, so it suited her perfectly. As Vida continued yelling and fussing, and telling Marina that she “never listened,” MJ told Vida to knock it off, and made the wise decision to put her out of the room so she could have her second fitting in peace.

The dress fit like a glove the second time MJ tried it on, and once the look was complete, it turned out that she was right about the makeup too.  She looked stunning and dramatic, and oh, so very MJ. But what was also so very MJ is that she couldn’t sit still and behave herself for a few minutes until it was time to head down to the ceremony, and as she excitedly picked up one of her flower girls for a hug, her veil ripped, and she got a spot on the lacy bodice.  And even worse? The dressmaker had already left! But I’ve said it before and I’ll say it again, every girl needs a bff like Reza. He managed to save the day once again. After a few snips here and few tucks there, the tiny imperfections were no longer visible.

In the meantime, the rest of the posh Persian posse had turned up in their fabulous wedding best.  They all looked gorgeous, as always, and were thrilled to be watching one of their own walk down the aisle and marry the man she loved.  GG even took her ring off for the occasion, which left Reza to wonder if she’d grown, or simply “hawked that mother f***er” once she’d realized how much it was worth.  It was likely the latter, but who knows? She and Nema were certainly looking awfully cozy, as they whispered and sipped champagne and waited for the wedding to begin.

And I must take a moment to talk about Shervin’s little nephew.  OMG…what a little morsel! And that tiny little tux! Even the usually surly Mike couldn’t resist picking him up and kissing his chubby little cheeks.  And it was a bit of a tough day for Mike as he thought about the fact that yet another of his relationships had failed when Morgan walked out of his life, and he still hadn’t figured out what had gone wrong in his marriage to Jessica.  Well, he knows he cheated, but it’s the why that was getting to him.

As Tommy made his way down the aisle, giving out high fives and hugging his buddies, like an athlete taking the field, the guests began to settle down, and assumed the bride would be coming out next.  They thought wrong.  It wasn’t until an hour and a half later that the blushing bride made her entrance, running her mouth and loudly greeting her guests as she glided down the aisle.  It was just so—MJ and Tommy.

The rest of the wedding was just as messy, but everyone had a ball. And in it’s own way, it really was beautiful. Sure,  Tommy complimented MJ on how great the dress made her “cans” look, but when he said his vows, he said her smile lit up every room she entered, and called it his “kryptonite.” And, of course, MJ had to tell Tommy to STFU, as she tried to get a word in edgewise to say her own vows, but then she promised to make him feel more loved each and every day.  And as the celebrant asked Tommy for permission to wed them, Tommy said “Absof***inglutely,”  and all of the guests laughed through their tears of joy!

And since it was the Shahs, the reception was turnt! They drank, they laughed, they danced–even Vida was getting her groove on, and said she’d never danced so much in her entire life.

As the evening wore on, the crew made their way outside to have a moment, and it was clear that they were all on the verge of some major changes as the season came to a close. Reza and Adam have finally finished their home, and are ready to put their condo on the market, which will put them in a great position to start their journey on the road to a baby of their own, although Reza couldn’t help but make it clear that Adam needs to pull a little more weight financially. GG was finally ready to admit that she may be ready to take the next things to another level with Nema…or at least that she was “DTF.” And Mike is looking to settle down, and find the one who is willing and able to help him “unpack all his baggage.” In the end, they toasted to friendship and the love they all have for each other, and wished MJ and Tommy all the best!

In all, it was the best possible way to end the season, but it’s not time to say goodbye quite yet…the posse will be back for an explosive reunion next week. Stay tuned!