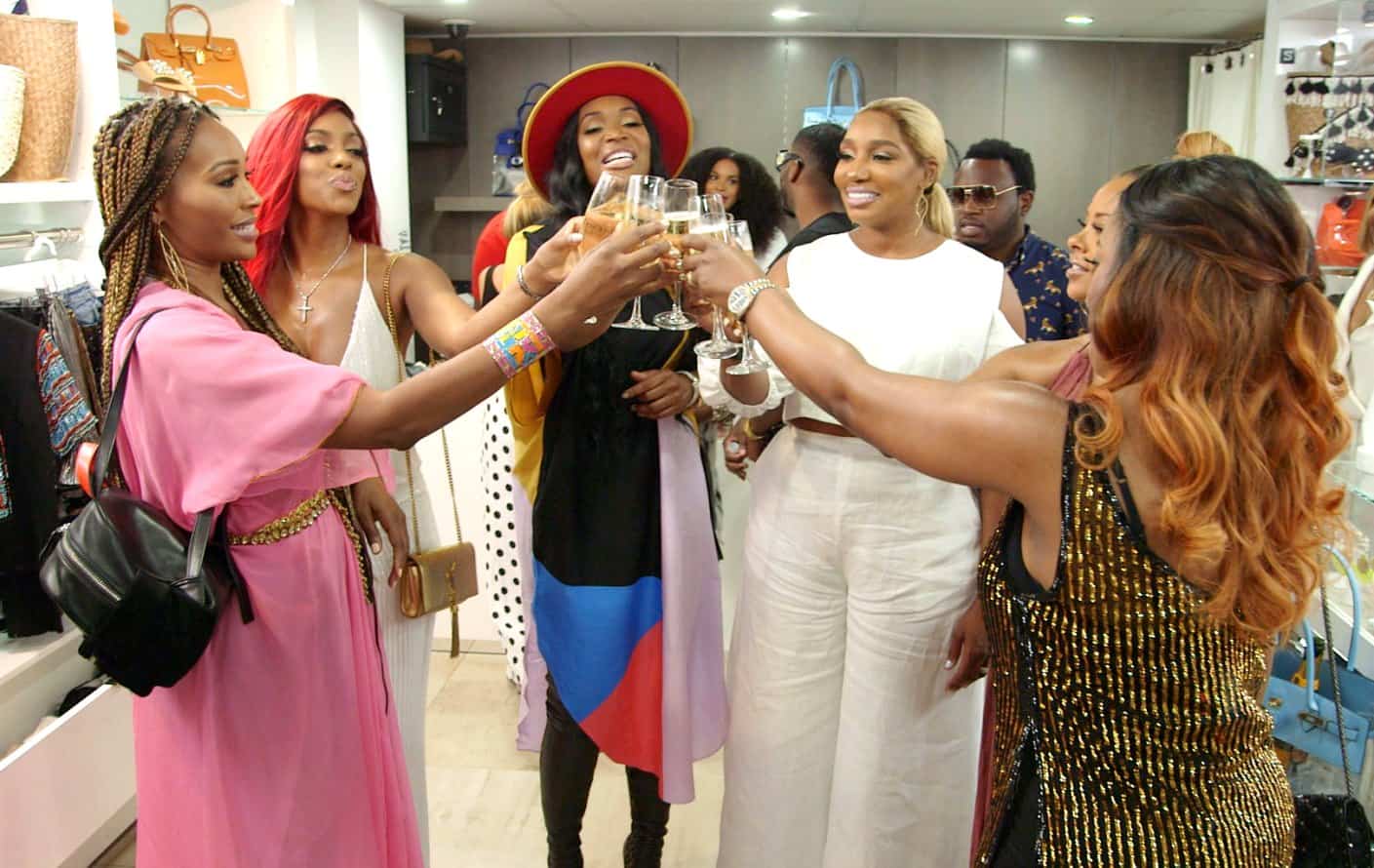 Last night’s episode of The Real Housewives of Atlanta may not have been the most exciting or dramatic, but we actually witnessed a miracle: The peaches took a trip together, and everyone actually managed to get along! As a self proclaimed housewives aficionado, I can tell you this is a first for any franchise, so kudos to them.  But like I said, it did leave a little to be desired in the drama department.

When we picked up with the ladies, Porsha was in Miami with her new man, Dennis, awaiting the arrival of the others–and the arrival of a diamond for her left hand.  And while, the second one never came, Dennis still came through big time! The jewelry box he presented her with at the end of last week’s episode held a Rolex watch, a gift so extravagant that Porsha was inspired to stuff her ample behind into yet another skin tight outfit–a dress so snug, she had to ask a member of the wait staff to unzip it, lest she keel over on the spot.

But Dennis seemed please with the ensemble, and he suggested that they head out to a club so he could show her off.  But Porsha had other plans–she wanted to spend the night in the bed, thanking him for the watch.  But one of Dennis’ “homeboys” was in town and staying at the same hotel, so he went off without her to hang out and have a few drinks.  Well, maybe more than a few.

He showed up again drunk around dawn, a fact that Porsha might have let slide, if only he’d let her use his toothbrush.  You see, these two are really close.  When they’re home, Porsha said, they share a toothbrush all the time, but apparently, in Miami, he found the ritual disgusting, and she had to make do with the toothbrush that the hotel provided, which she said was “too soft.” So naturally, she started an argument about his antics the night before, but it didn’t last long, mainly because he’d just given her a beautiful diamond encrusted necklace, but also because she doesn’t want to be the type of girl that asks too many questions.  According to Porsha, “ignorance is bliss,” and she’s just trying to ‘enjoy her man.’

But Dennis had to spend the rest of the weekend in meetings, and Porsha would have to make do with enjoying her girlfriends, who were due to arrive any moment.  Porsha had planned everything, and assigned the women to the rooms she deemed fit.  Usually room assignments spark nasty debates with these women, but this time it was only Marlo who found the accommodations inadequate.  She immediately called the concierge and asked for another room, but soon discovered that the elevator in her suite led directly to the much larger suite below, which Porsha had assigned to herself.  So what did Marlo do? She switched the rooms, and moved Porsha’s luggage up to her suite without even asking.  But even that didn’t put a damper on things.  The ladies were determined to make this trip a positive one because they were all there to support NeNe.

NeNe was in town to perform in a stand up comedy revue, and it would be her first time taking the stage since the heckling debacle last year, in which she told an audience member that she ‘hoped she got raped by her Uber driver on the way home.’ As you can imagine, that retort landed with a thud, but NeNe said she now has better ways of dealing with hecklers… ignore them, or call security.  Sounds like a solid plan, but NeNe’s set went off without a hitch, and she was thrilled to have Gregg and her friends there to support her.

After the show, the ladies went for dinner and drinks, and NeNe commented about how nice it was to see Porsha and Marlo getting along so well, especially after they nearly came to blows during the girls’ trip to Barcelona last season.  But I think Porsha is incapable of getting angry these days.  She’s too much in love.  The other ladies noticed how she spoke about her new man like a prince and asked if they were getting serious.  Porsha said that they had discussed marriage, and continued to gush about how she was ready to become a wife again until Kandi piped up with some sound advice.  She told her that it may not be a good look to push the idea of marriage too much, and that it was probably best to let him be the one to bring it up.

You see, what Porsha doesn’t know is that Kandi knows several other women who have dated Dennis in the past, and has all kinds of piping hot tea on him…but she was kind enough not to spill it, and continued to allow Porsha to live in bliss.  Porsha seemed to take Kandi’s advice to heart, but also said that she thought her situation was different, because she had finally found the holy grail: a man who loved her more than she loved him.

The following morning, Porsha bonded with Marlo, and the two discussed how silly their feud had been, and how they actually had a lot in common.  After sharing breakfast, they joined the others for the opening of “Swaggalicicious,” NeNe’s boutique, which she is now turning into a chain that will be featured at several hotels around the country.  The turnout was huge, and NeNe was thoroughly enjoying her success, but it wasn’t long before the crowd and the heat got to Gregg, who had to step outside for some air.  He’s a bit fragile following his surgery for stage 3 colon cancer, and the ladies joined him outside, where they fanned him, and laughed at his jokes until he felt better.  It was sweet, and it was clear that despite their problems, they were all going to come together for Gregg and NeNe when it counted most.

The show faded to black from there, but don’t worry, we’re only two episodes in, and if I know the RHOA ladies, this sympathy and goodwill won’t last long. Stay tuned!