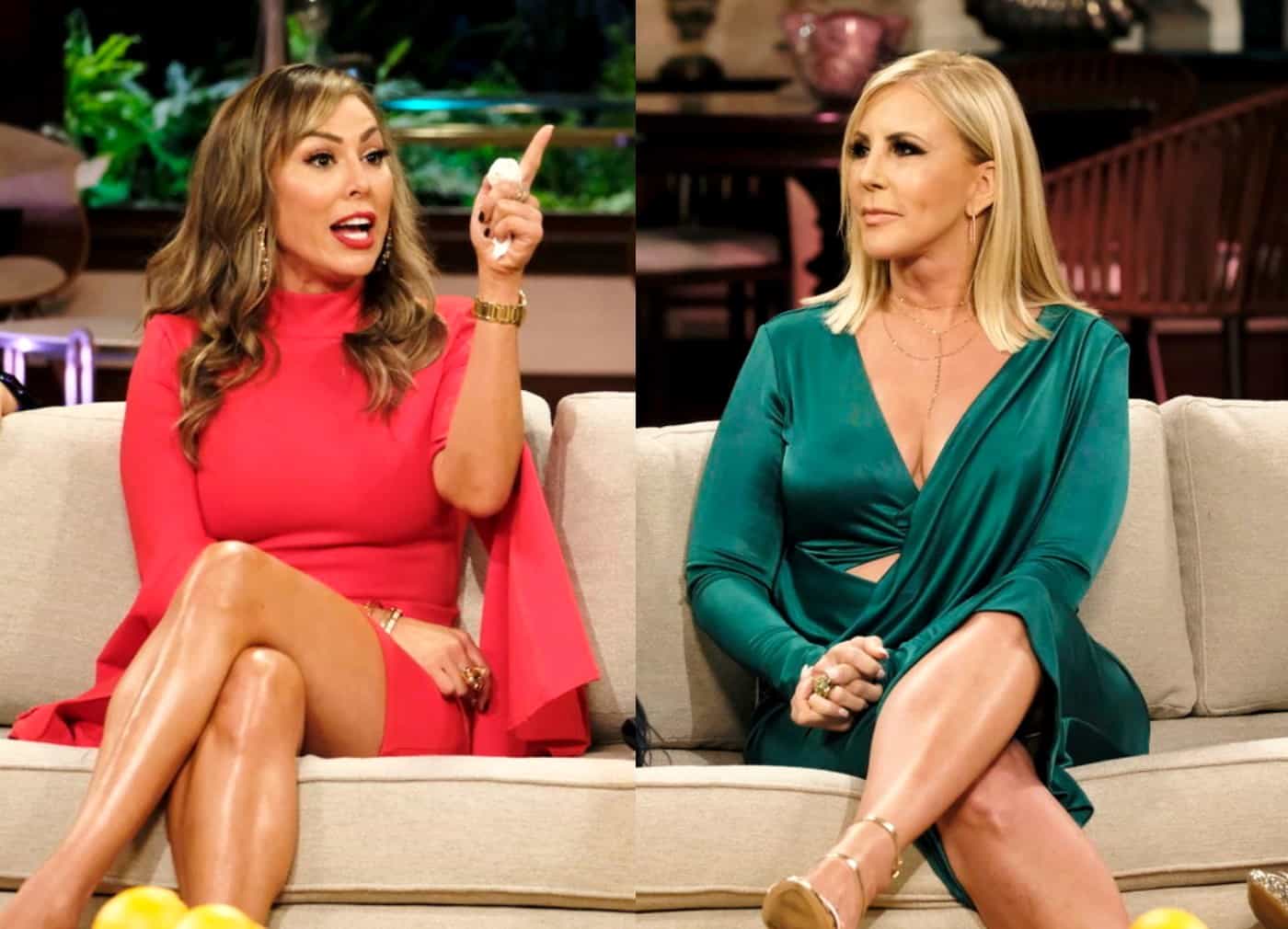 The Real Housewives of Orange County Reunion Part One: Because we need more than one part for these caddy women to stir up old drama, cry, and bicker incessantly.

Even Andy Cohen looks bored as he greets each of the women from this season. When he addresses Vicki he states, “I’m eyeballing your face. I didn’t compliment it yet. But it looks really good.” As Andy continues around the sofa saying hello to all of the women, he focuses on Shannon’s amazing weight loss, Kelly’s cougar-ness, and Emily’s troll-like husband, Shane. These ladies legs are shining more than their gaudy diamond jewelry and they look like rabid dogs, ready to pounce on anyone who eyes at them the wrong way.

Luckily for us, Andy decides to begin the reunion by focusing on everyone’s favorite: the tres amigas. Please note the sarcasm. We watch as the obnoxious trio throws back shots, flashes bar patrons, and drunkenly cries. We also get to relive the Shannon/Vicki make-out sesh and it is just as gag-worthy as the last time. Andy points out that Vicki seemed to have a fresh start to the new season. Shannon explains that “because part of” her issue with Vicki “was about David,” the pact that she made with Vicki to move on was really able to come to fruition.

Naturally, Gina, and her teased hair, jumps right into the Vicki segment and states, “I am offended” that Vicki can “whoop it up” at Andale’s in Mexico, but bashed Gina’s sequined birthday party. After too much bickering, too soon, Vicki begrudgingly apologizes to Gina and the convo gets switched to Vicki’s relationship with Steve. A lot of things Vicki said to Steve “on the DL” —even though there were cameras present—came out during the season and the fact that Steve basically told Vicki to “put a lid on” embarrassing behavior is causing some friction with the girls.

The flashback scenes of Vicki’s desperation to be married to Steve are painful. The funny part is, Vicki doesn’t even seem embarrassed re-watching her throwing herself at her man. Vicki claims she “didn’t remember” a lot of the scenes and regarding marriage, she states, “I don’t think it’s gonna be him getting down on one knee…” aka: Vicki is DEF gonna be the one proposing. Andy wishes to hear about Vicki’s pre-marriage couple’s counseling and then takes a poll to see who thinks Steve and Vicki will be getting married. Not surprisingly, Tamra and Shannon are the only two who raise their hands and Kelly states that Steve is cool with just being Vicki’s partner. Andy asks the “million dollar question” and wishes to know if Vicki wants to marry Steve OR if Vicki just wants to be married. Good. Question.

Naturally, Brooks gets brought up because what’s a Vicki segment without Brooks? Amiright? According to Vicki, “Brooks murdered my self-esteem and my pocketbook and I’m going after him. He owes me a lot of money and I have an excel spreadsheet. I want my money back. I know what I’m doing.” Vicki states she fell for Brooks because he “told her everything she wanted to hear.” Some of the women even think Brooks “studied the show” to learn about Vicki’s ins and outs. Whatever the case may be, Vicki clearly has a great track record when it comes to picking partners…

Now it’s time for Gina to do some of the twalking. Gina looks like she is gonna hurl watching back the season. You can tell she is bracing herself for the divorce segments and as much as I don’t like the lady, I do feel bad for her as she watches her marriage fall apart. Gina explains that she “didn’t know that the down” between her and her husband would lead to divorce and that she hoped that joining the show would help make their marriage better. Tamra thinks that the whole thing is “just bizarre” and Gina states that she still hasn’t told the kids about the divorce. Andy pries to find out “the crux of the issue” with Gina’s ex-husband and Gina explains that he didn’t do the things he needed to do to make Gina feel like a special wife.

Once Gina gets her tears out, Andy demands to know what happened at Vicki’s Italian dinner party. I love how Andy doesn’t hold back. He calls Vicki out for stating that she thought Gina and her husband were getting divorced because of an affair. From there, the whole “Gina doesn’t believe in God” debacle gets discussed. Gina explains, “I’m more of an agnostic. Three of my children are baptized…just in case.” Vicki tries to defend herself by saying, “that’s how I felt at that time.” The opinionated women yell things about their shock and surprise and then WTF is Vicki talking about when she mentions the Ten Commandments?!

Remember when Vicki broke girl-code and set Kelly’s ex-husband up with a new lady? I DO. That was fun to reflect on. I am still team Kelly, as I feel like Vicki behaved out of line and not like a good friend at all. Kelly opens her “fat a*s mouth” and states that she is no longer close with Vicki. Vicki shares that Michael is dating someone new, but that still doesn’t make things better. Kelly explains that she was “freshly divorced” and that she had to hear the news from someone else. Kelly claims that she would have been fine if Vicki TOLD her about the set-up, but it is clear that Vicki’s loyalty is absolute BS.

TIME OUT. Why does everything come back to Vicki on this reunion!? She’s got her hands in alllllll of the drama. Vicki claims that Kelly’s ex stated it was “Fourteen years of hell” being married to Kelly. Kelly explains Vicki as a “fart: silent but deadly.” LOL. Vicki tells Kelly she is gross and that she is “like a baboon.” Watching these two go back and forth is exhausting. Andy doesn’t let up. He calls Vicki out for saying Kelly only dates men who have money and then calls Kelly out for blogging about “Steve’s red flags.” Kelly clarifies her position by stating Steve does Vicki’s “dirty work” and the blows continue. Vicki pulls a classic Vicki move and hits below the belt because she was feeling threatened by Kelly. Vicki blurts out that Kelly does cocaine.

Kelly claps back. “You’re a hypocrite. You’re a liar.” Kelly dares Vicki to give her a drug test and Vicki accuses Kelly further by saying Kelly is never with her daughter, Jolie. Kelly’s in tears because Vicki believes she does cocaine and is not a good mother. Well, that took an awkward turn, huh? Kelly is legit hyperventilating and Vicki throws her a pretty sh*tty apology. Vicki insinuates things and makes it way worse. How dare Vicki throw those accusations out in the universe? Vicki feels like because Kelly “called her fat, basically” then she could say mean things to Kelly. According to Vicki, “If you wanna hit me, I’ll hit you back.” Haven’t these ladies ever heard the saying, “two wrongs don’t make a right?!”

When a break is called, Tamra walks over to Vicki and tells her she cannot say Kelly does cocaine. Kelly is livid in her dressing room and yells to the cameras to “give her a f*cking minute.” Kelly calls her ex-husband Michael and puts him on the spot. She demands to know the truth about the “fourteen years of hell” line and makes him clarify that she is “anti-drugs.” Shannon and Tamra try to let their amiga, Vicki, know that she was out of line while Kelly is hysterical. To tell you the truth, I am fearful about part two of this wack reunion.