Home Real Housewives of Orange County News RHOC’s Vicki Gunvalson Reveals Who Told Her About Kelly Dodd’s Alleged Cocaine Use, Denies Ever Using Drugs and Fires Back at Claims of Hypocrisy

RHOC’s Vicki Gunvalson Reveals Who Told Her About Kelly Dodd’s Alleged Cocaine Use, Denies Ever Using Drugs and Fires Back at Claims of Hypocrisy 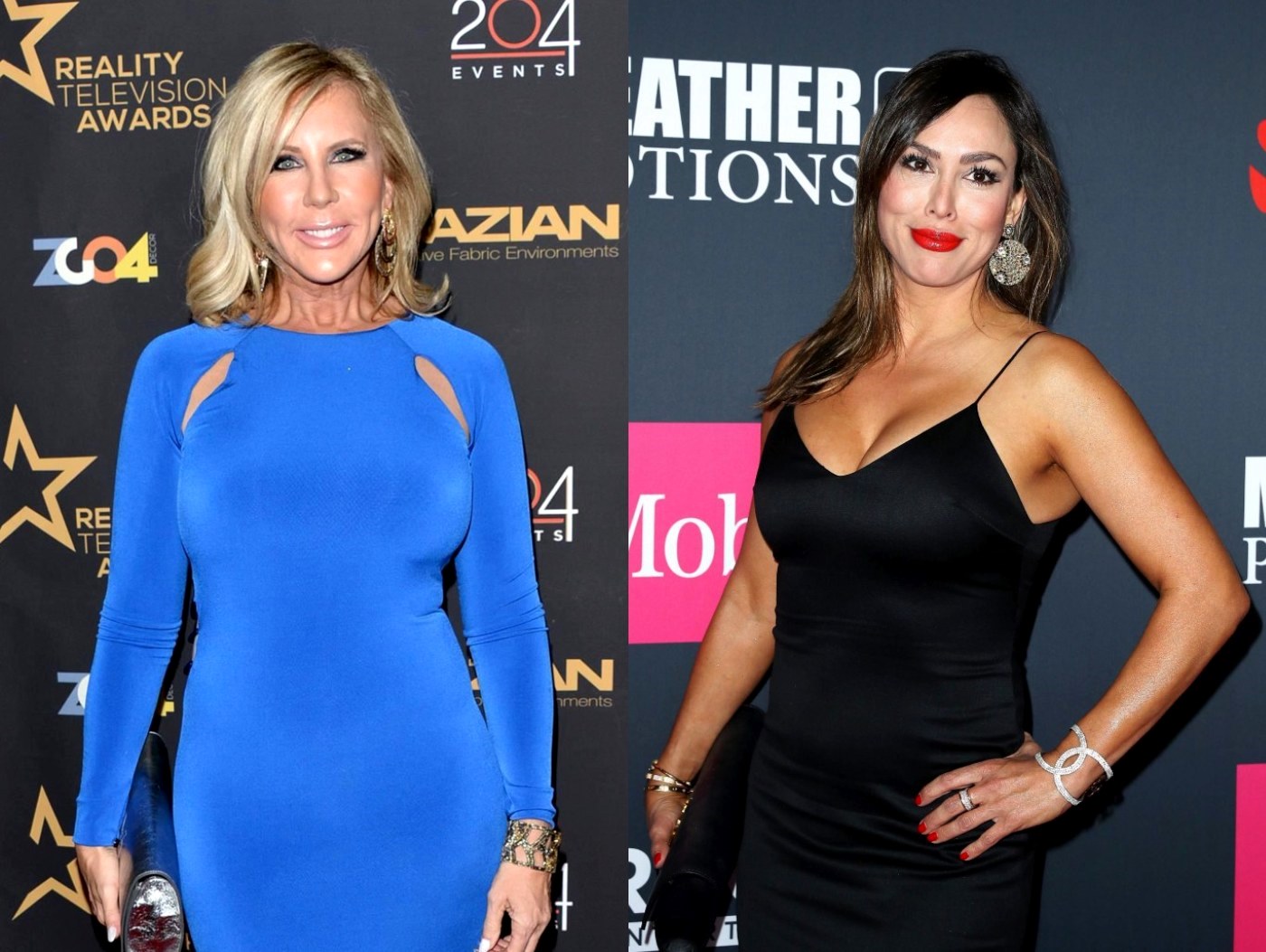 The Real Housewives of Orange County star Vicki Gunvalson is revealing where she got the information about castmate Kelly Dodd‘s alleged use of cocaine.

Following the release of the upcoming RHOC season 13 reunion trailer, in which Vicki suggests Kelly is a drug user, the longtime reality star took to Twitter, where she revealed she first heard the rumor from a “very good friend” of Kelly’s and defended herself against claims of her own supposed drug use.

After a Twitter user suspected it was Kelly’s ex-husband, Michael Dodd, who started the nasty rumor, Vicki said it was not Michael, but someone else close to her co-star.

“Nope!! Shannon and I both heard it from a very good friend of hers,” Vicki explained on Twitter. 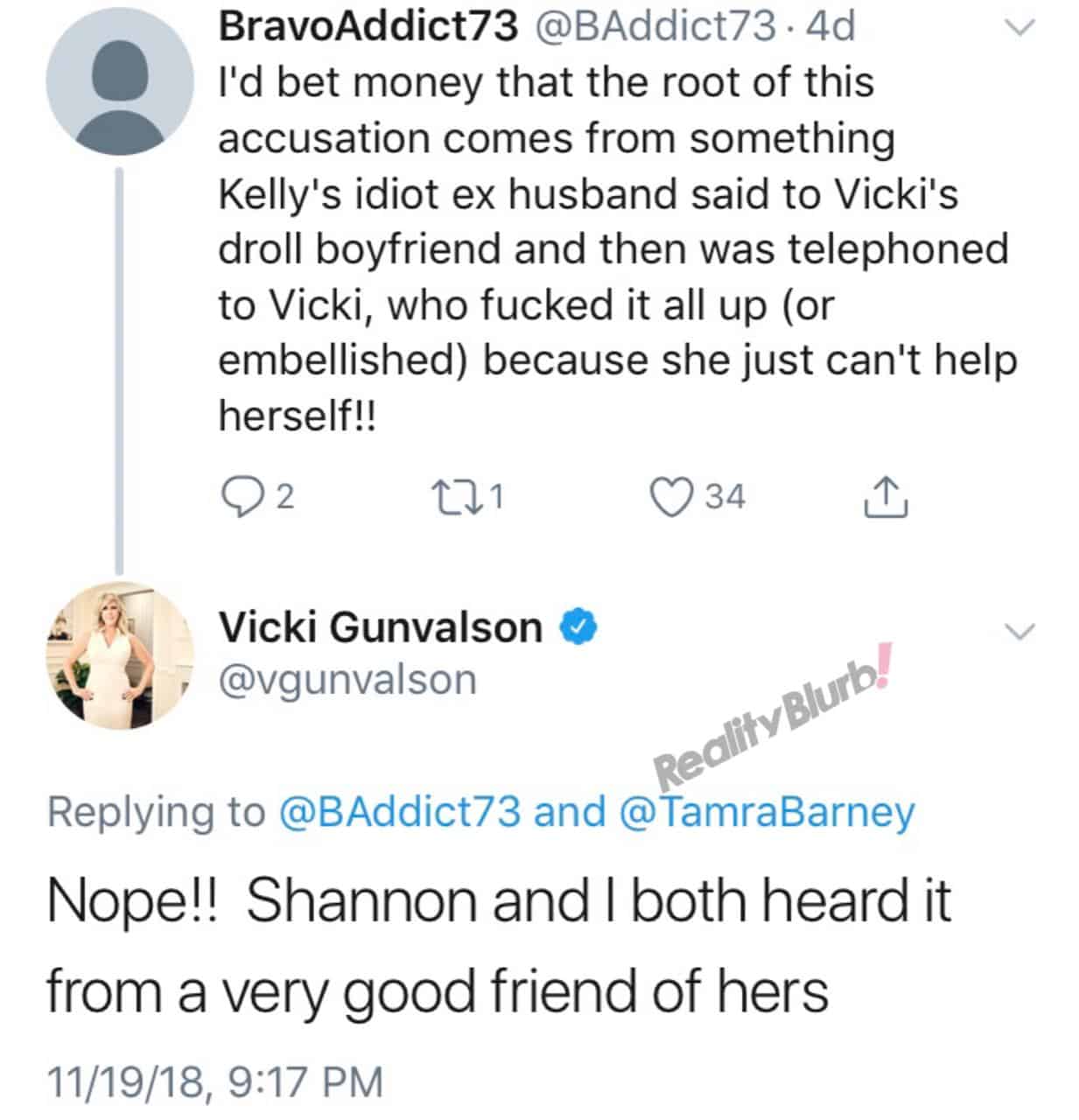 After Vicki’s co-star, Tamra Judge, shared a link to an article about Vicki’s cocaine use claims against Kelly, one fan said they weren’t shocked. In fact, the fan said she would be surprised if Kelly didn’t use cocaine and suspected Vicki had multiple doctors prescribing her Xanax. 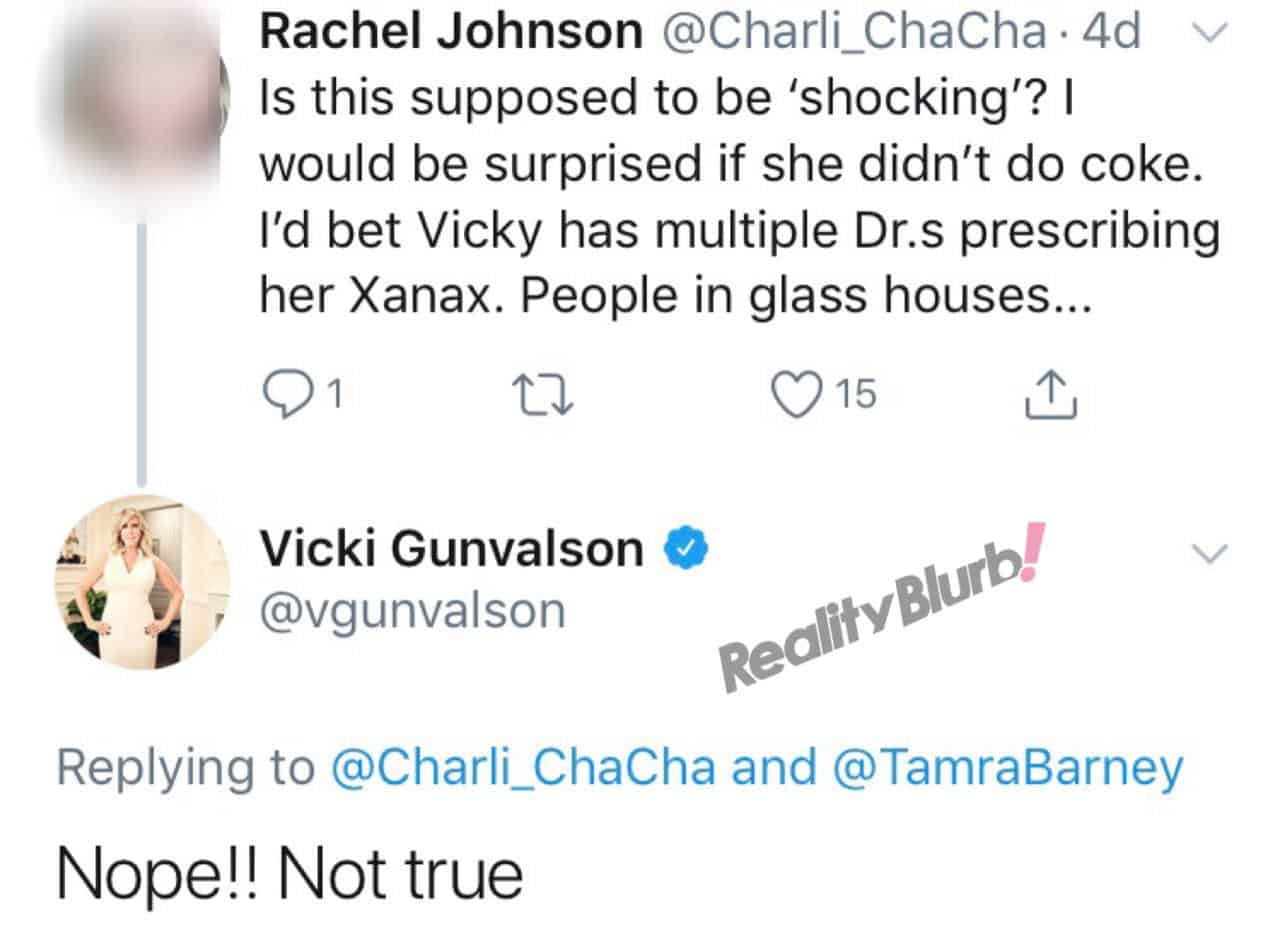 Vicki then faced allegations of being a liar after a fan said that while she accuses everyone else of “everything,” she lied about her ex-boyfriend, Brooks Ayers, having cancer.

“Not true!! Didn’t you see HIS interview?? He lied to me!” she fired back.

As Real Housewives of Orange County fans may have heard, Kelly announced she would be quitting the show if Vicki returns earlier this week due to her drug lies.

“I can’t go back if that liar can just say sh*t without consequences. The money isn’t worth it to me!” Kelly explained. “My daughter means more to me than this show and she is trying to ruin my reputation.. just out of principle I won’t go back! They can pick the OG I’m out!!”

A short time later, Kelly announced she would not be returning to the RHOC next season.

“I’m not giving them an ultimatum, I just won’t be on next year. I can’t work with this woman so as long as they have her on I can’t go forward with the show.”

And when another fan asked her if she was really leaving the show, Kelly responded, “Yep!”

Part one of The Real Housewives of Orange County reunion special airs Sunday night at 9 p.m. on Bravo TV.