Kelly Dodd Announces She Has Quit the RHOC! See Her Shocking Posts, Plus Gina Disses Vicki! 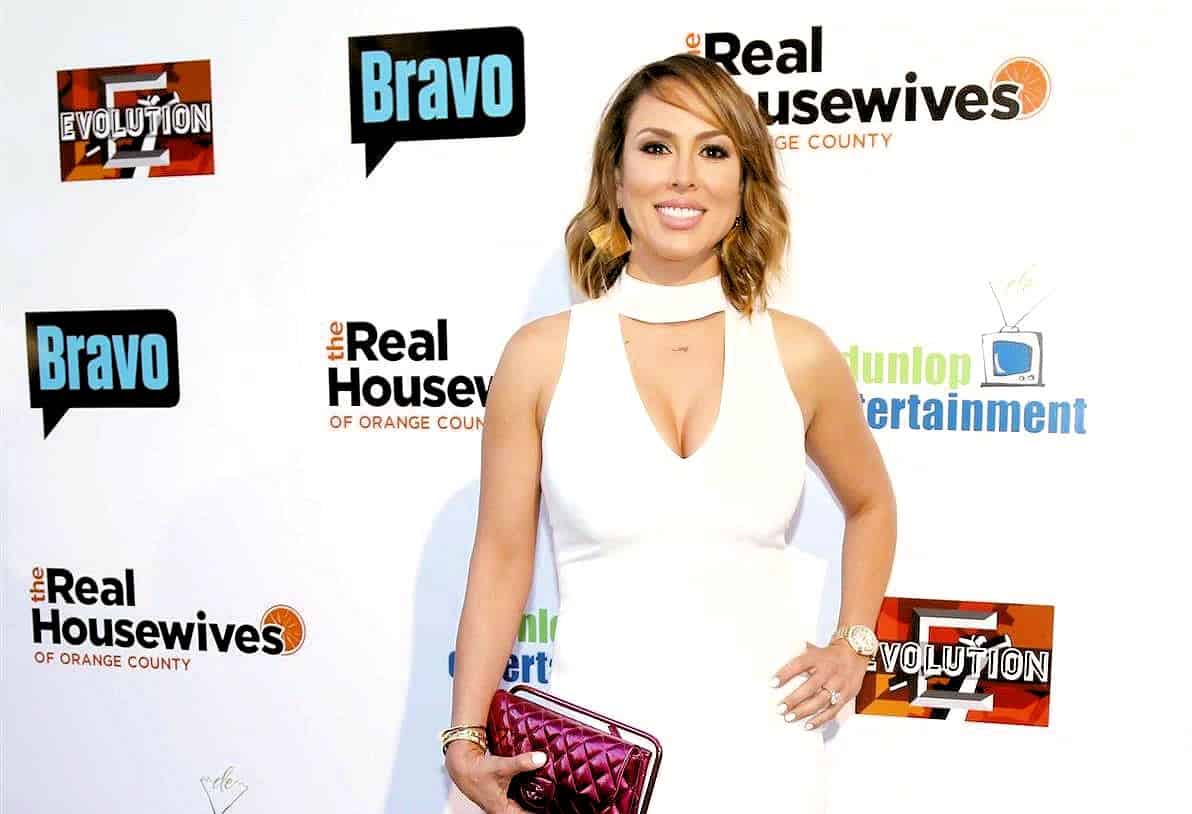 It might be Thanksgiving (Happy Thanksgiving everyone!), but, as we all know, Bravo housewives do not take any days off when it comes to stirring things up!

Just minutes ago, the Real Housewives of Orange County star Kelly Dodd made a shocking announcement on her Instagram page, revealing she won’t be returning to the Bravo series next year.

Kelly’s surprising exit came just over a day after she revealed she won’t return to the RHOC next season unless Bravo fires the show’s OG Vicki Gunvalson. The reason? Vicki made a startling accusation against Kelly on the upcoming RHOC reunion, accusing the 43-yr-old mom of one of using cocaine.

Kelly announced her departure from the RHOC under one of her Instagram posts after one of her followers asked her, “Please say it isn’t so. Are you really leaving the show?”

Minutes later, Kelly reaffirmed her comment by telling another fan that she refuses to work with someone like Vicki.

“They can have her… I can’t work with a person like this,” wrote Kelly. 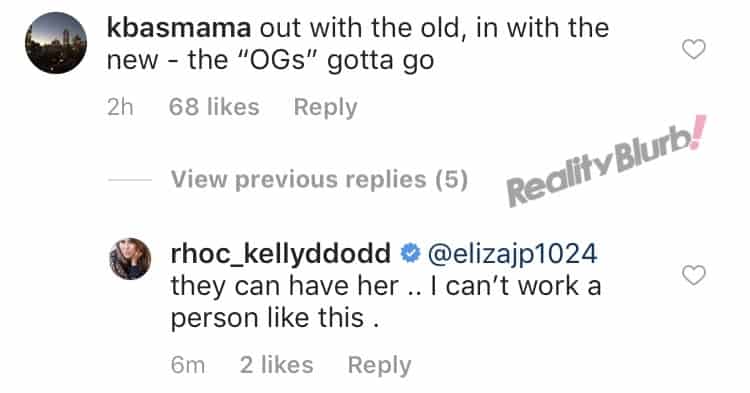 When another follower accused Kelly of attempting to give the Bravo network an ultimatum when it came to her and Vicki, Kelly denied this and further confirmed she had no plans to appear on the RHOC next season.

“I’m not giving them an ultimatum,” wrote Kelly. “I just won’t be on next year.”

She later added, “I can’t work with this woman so as long as they have her on I can’t go forward with the show.” 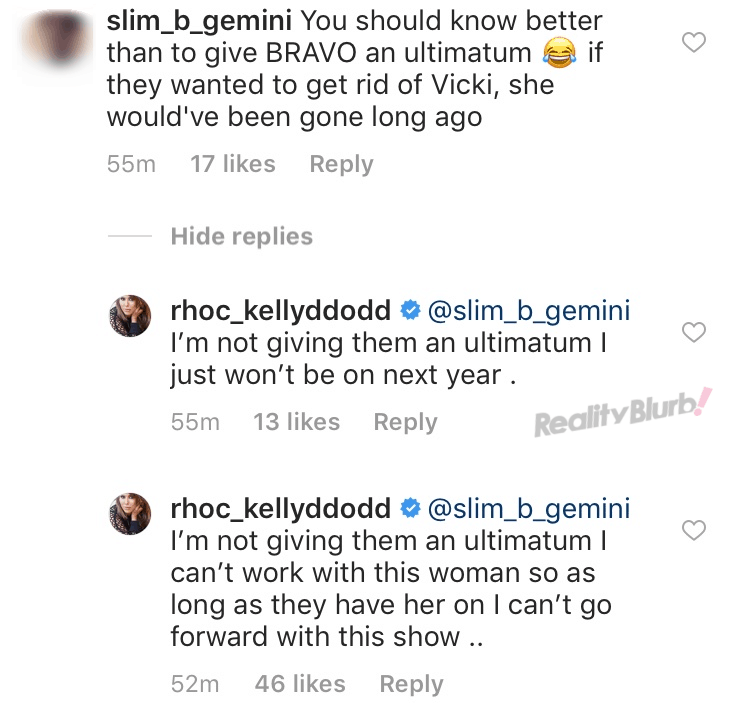 Kelly’s castmate Gina Kirschenheiter also got in on the action as she commented on Kelly’s page by referring to Vicki as being “two faced.”

“Like I said to [you] before Kell. It’s actually impressive how she remains two faced despite cutting one off…” wrote Gina, seemingly referencing Vicki’s facelift this season. 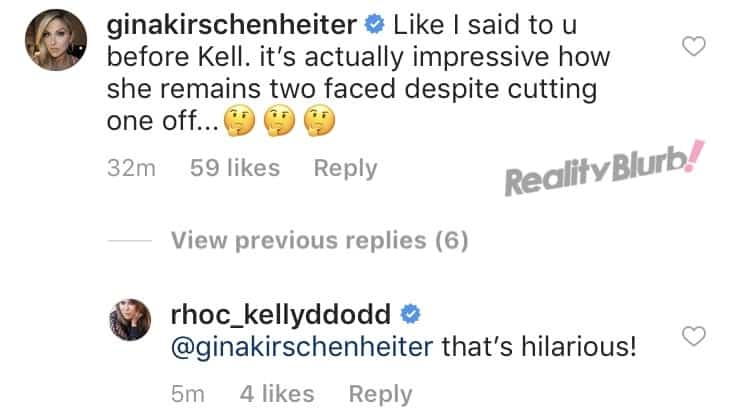 As for Gina’s beef with Vicki, Vicki appeared to turn on Gina towards the end of the season after her fellow tres amigas members  – Tamra Judge and Shannon Beador – started to take issue with the New York native.

Additionally, Kelly gave an interview to PEOPLE late Wednesday in which she opened up about why Vicki’s comment was so hurtful. According to Kelly, she’s really upset over it because it has affected her 12-yr-old daughter Jolie.

“My daughter doesn’t watch the show, but she reads social media,” shared Kelly. “She’s seen what people are saying and it upsets her.”

“She goes to a very conservative Catholic school. Her friends’ moms are all into the show, they’re seeing everything that’s going on. My daughter’s been crying, thinking that her friend’s parents aren’t going to let her see them because they’ll think that I do drugs.” she continued. “It hurts my daughter! Vicki’s a mother, she should know better.”

Kelly also admitted that she left the reunion on good terms with Vicki, but added that seeing the reunion trailer which highlighted the drug accusation brought back all the negative feelings.

“We left the reunion in a good place, but I didn’t know the repercussions it would have on me and my daughter,” said Kelly. “I didn’t know how damaging it really was. If I knew then what I knew now, I would not have forgiven her so quick.”

Back on Instagram, when one of Kelly’s followers pointed out that she has also said shocking things about her castmates, an example of this is Kelly having to apologize and retract a defamatory statement she made about Heather Dubrow’s husband Dr. Terry Dubrow’s medical practice last year, Kelly insisted she has never crossed the line.

“You’ve said worse things to your castmates. You’re not innocent. Stop being dramatic,” said that follower to Kelly.

Now, it is possible that Kelly might simply be saying this out of anger and could still end up returning to the O.C. Housewives next season. She wouldn’t be the first Housewife to do such a thing. Last year, LeeAnne Locken announced she was quitting the Real Housewives of Dallas only to later have a change of heart before filming on season three started.

While Kelly’s future on Bravo remains up in the air, what is clear, courtesy of our unscientific poll from yesterday, is that viewers would love for her to remain on the series.