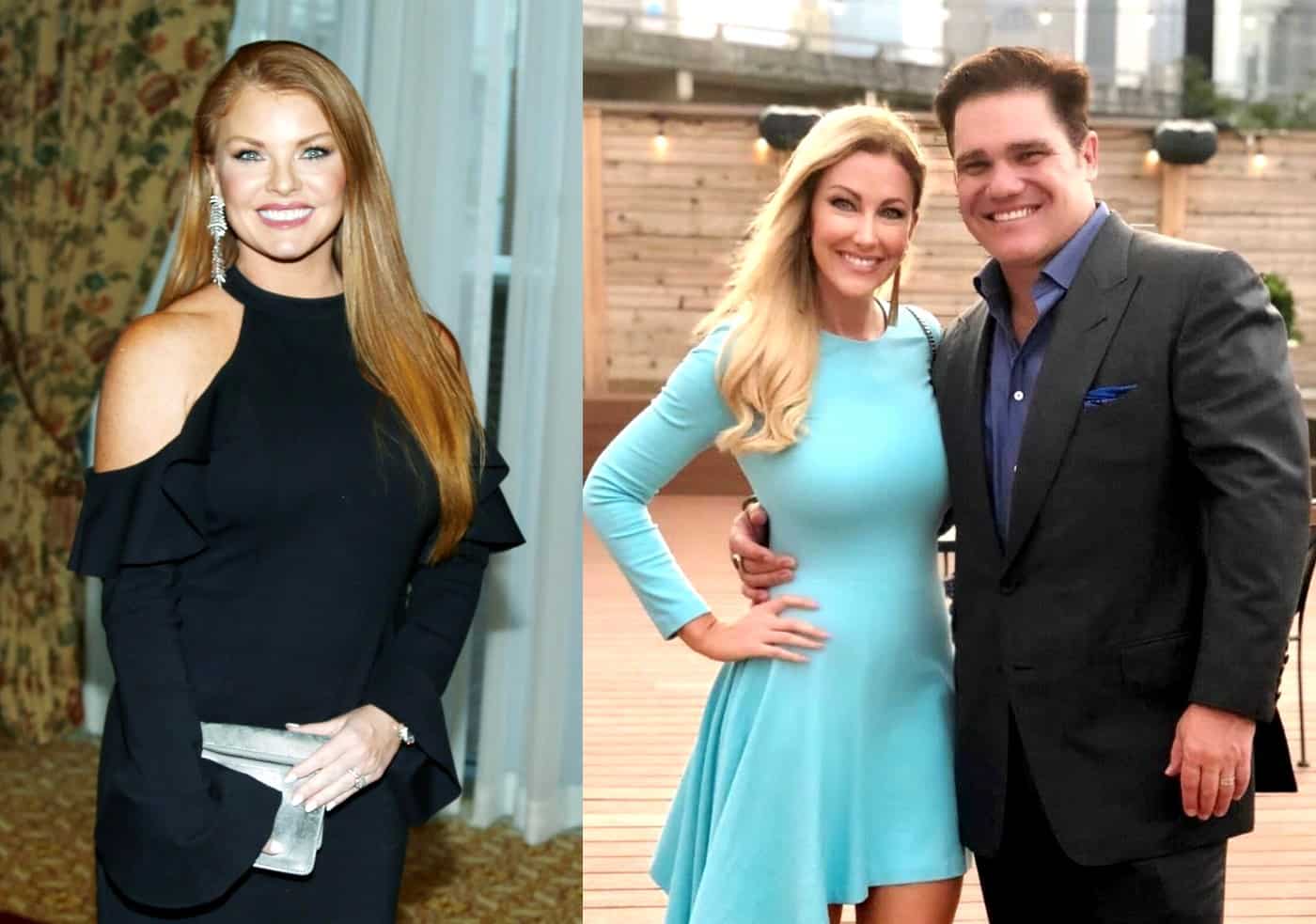 Just like the first two seasons, Season 3 of Real Housewives of Dallas is focusing on the feud between LeeAnne Locken and Brandi Redmond. But this time around, Brandi’s girl Stephanie Hollman is friends with LeeAnne, and that means Stephanie is stuck in the middle of the drama.

This apparently also puts Stephanie’s husband, Travis Hollman, in an awkward spot, and all of this has resulted in an odd attack by Brandi on Travis that has left fans scratching their heads.

Late last month, LeeAnne tweeted a GIF of herself mimicking a sexual act and added the caption, “How to keep a man happy.”  Travis then responded to LeeAnne’s tweet by writing that he agrees with her.

“I am totally with @LeeAnneLocken on how to keep men happy!!!! Food is over rated,” tweeted Travis.

Was it a little dirty? Sure. But we are all adults here. And, LeeAnne didn’t hurt anyone by making a dirty joke. But, now – over a month later – Brandi has responded to Travis’ support of LeeAnne, and she appeared to take things way out of context. 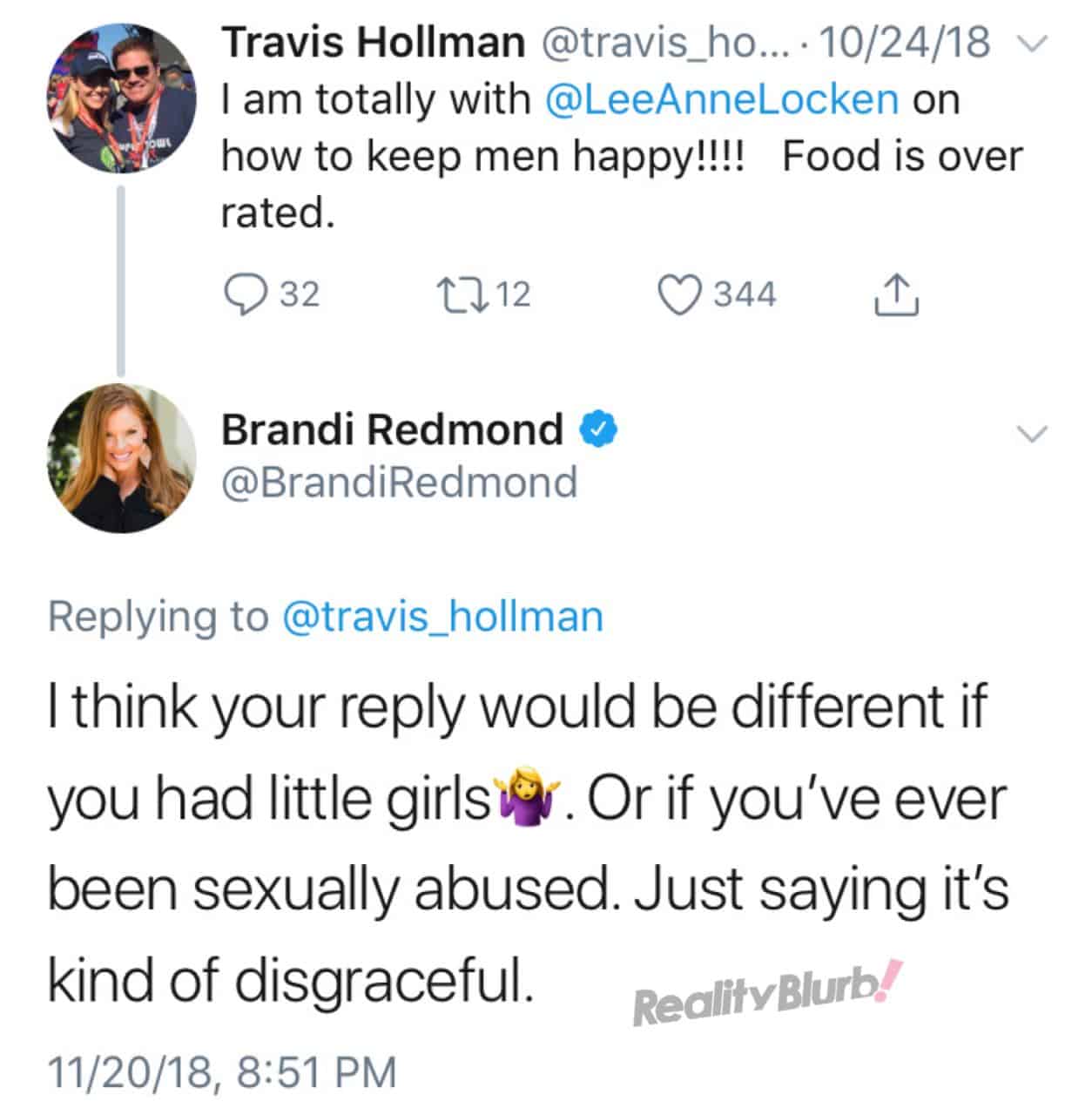 Brandi fired back at Travis, “I think your reply would be different if you had little girls. Or if you’ve ever been sexually abused. Just saying it’s kind of disgraceful.”

Travis did not respond to Brandi’s tweet. And so far, Stephanie appears to be staying mum as well.

RHOD fans however quickly jumped into the slow-motion social media exchange by saying that Brandi’s comment had nothing to do with what Travis said, and they also questioned why Brandi would attack her best friend’s husband.

Things also took a weird turn during recent RHOD episodes when LeeAnne and Brandi feuded over a video. During the cast’s trip to Copenhagen. Brandi and some of her co-stars decided to go skinny-dipping, and LeeAnne, who did not participate, decided to shoot a video of Brandi and the ladies going commando.

This led to anger from Brandi, who believed LeeAnne had sinister motives for shooting the video. Brandi asked that LeeAnne delete it, which LeeAnne later claimed to have done.

Following that episode, many fans wondered why Brandi would be upset at LeeAnne taping her skinny-dipping since, you know, the same scene was also being filmed by Bravo to air on TV.

Brandi is however taking to Twitter and explaining why she felt comfortable with Bravo shooting her without her clothes on and not with LeeAnne doing the same. According to Brandi, she was aware the Bravo network would blur out her body parts and handle with the footage with care.

“Never played a victim nor made excuses,” wrote Brandi to a fan. “We were asked by Cary’s family to not take photos or videos. Also this isn’t my first housewives to watch. They protect and blur.”

Never played a victim nor made excuses. Thank you for watching. We were asked by Cary’s family to not take photos or videos. Also this isn’t my first housewives to watch. They protect and blur. Have a happy thanksgiving

Finally, the Bravo network just released a preview of the reunion. That trailer is below.

New episodes of the Real Housewives of Dallas air Wednesday nights on Bravo at 10/9c.