The Real Housewives of Dallas Recap: The Same Ol’ LeeAnne? 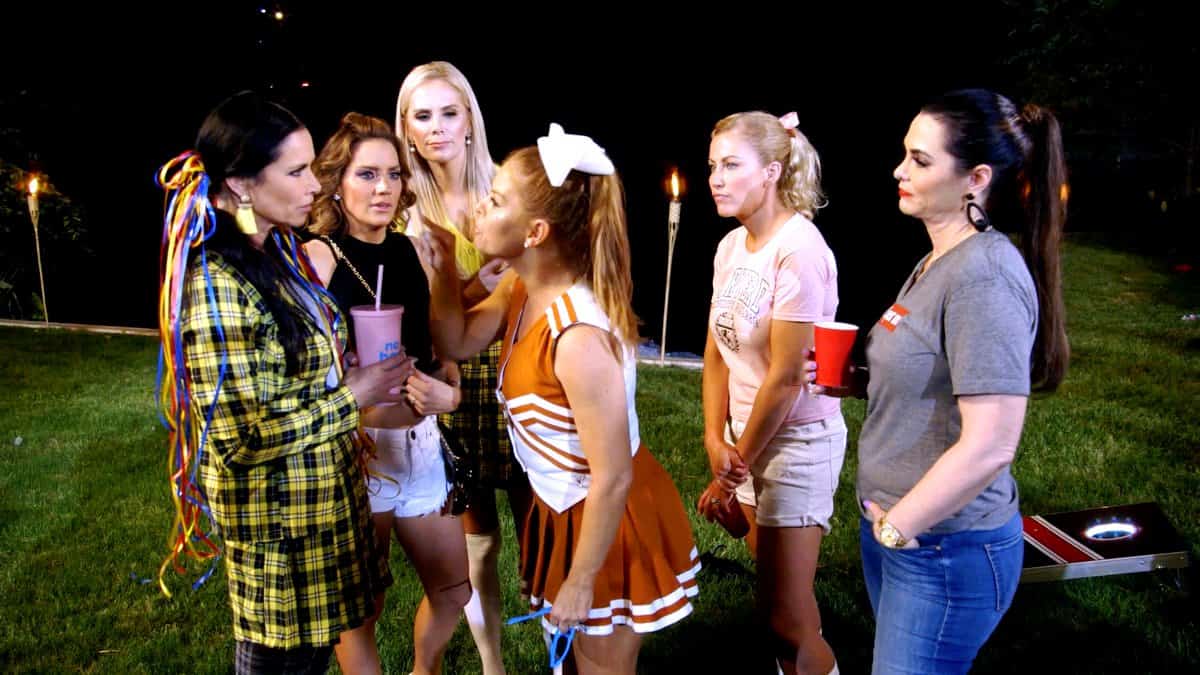 Well, the ladies of The Real Housewives of Dallas spent most of season 3 acting like school girls, so it was only fitting that they ended the season with a frat party.  Yes, you read that correctly.  Stephanie’s husband, Travis, is headed off to Harvard to attend a business program, and she thought throwing a party with a frat house theme would be the perfect way to send him off.  It was a cute idea, but there may have been less drinking and fighting at an actual frat house.

For starters, everyone was still talking about the ridiculous phone argument that started during their trip to Denmark.  Brandi was angry because LeeAnne took video of her and the rest of the ladies swimming either without their clothes on in the Baltic Sea, and when LeeAnne’s phone went missing, she was sure that Brandi had taken it.  Of course, Brandi returned the phone after she “found’ it in the lobby, but LeeAnne wasn’t buying the coincidence, as she was absolutely certain that Brandi had taken the phone in an effort to find out whether or not she had actually deleted the video like she said she had. Ugh! I know, it’s the most ridiculous argument ever.  But LeeAnne felt violated, so she told Brandi that she had cloned her phone.  And I know what you’re thinking about that too: Is cloning phones even a thing? I have no idea, and apparently neither do Brandi or LeeAnne because LeeAnne came up with the story and Brandi bought it.

Anyway, LeeAnne admitted to Kameron, Cary, and D’Andra that she hadn’t cloned the phone, and had made the whole thing up to get under Brandi’s skin, but that just made them angry at her, which wasn’t quite fair.  Granted, LeeAnne had lied and manipulated the situation (a problem she’s had in the past), but it was all mostly harmless, and besides, Brandi’s extreme over reaction to the whole video thing made it nearly impossible for LeeAnne not to want to mess with her head.  In an effort to smooth things over before the party (or maybe in an effort to stir the pot—you can never really be sure) Kameron called Brandi and told her the cloning the phone story was just a hoax, but it only made Brandi more angry.

As the ladies prepared to go to the frat party — in full costume for some odd reason, they all wondered just how LeeAnne and Brandi would get along.  But I ask you, doesn’t everyone have bigger fish to fry? Stephanie’s sending her husband off, Brandi was in the middle of finalizing her adoption of Baby Bruin, Kameron’s got her pink dog food, Cary’s laser center is a smashing success, D’Andra finally took over the reigns of the family business, and LeeAnne is putting the finishing touches on her wedding plans.  Sounds like it’s time for everyone to grow up — but no such luck! Stephanie and Brandi were dressed as cheerleaders, for crying out loud! And the only thing worse? LeeAnne and Kameron were dressed as twin “Chers” from Clueless (they know that movie was set in high school, not college, right?)

As soon as LeeAnne arrived, Stephanie made a bee-line for her, and having missed the fashion show where LeeAnne admitted the phone cloning story was a hoax, she asked if it was true.  LeeAnne assured her it was a joke, but Stephanie explained that it was actually a lie, and wasn’t funny.  She’s just starting to like LeeAnne, and really doesn’t want to see her revert back to her old ways.

In the meantime, Kameron took the opportunity to talk to Brandi, explaining, once again, that she could see both sides of the issue.  Sure, she’d want to take someone’s phone if she thought they had embarrassing pictures of her, but then again, she could understand LeeAnne wanting to upset her, but Brandi insisted that she never touched LeeAnne’s phone, and explained that she can’t stand LeeAnne, and had therefore never even been close enough to her to get to her phone.  She said she liked Kameron a lot, but had absolutely had it with her playing middle man, and doing LeeAnne’s bidding all the time.  For once, Brandi and I agree–Kameron has definitely become “LeeAnne’s b***h!”

Stephanie insisted that LeeAnne and Brandi have a talk.  They faced off, and both admitted that they didn’t trust the other.  LeeAnne didn’t believe that Brandi hadn’t taken her phone and Brandi was angry that LeeAnne had lied about the cloning.  LeeAnne brought up the fact that she had been hurt by Brandi calling her the Wicked Witch of the West, but in the funniest moment of the night, Brandi clarified her statement, saying “I never said West.”  LOL!!!!  She mentioned, however, that LeeAnne had said she was an alcoholic, but again, LeeAnne said that wasn’t true.

Cary cut in to say that she had definitely inferred it, but LeeAnne said that inferring and saying were two very different things. They’re not actually that different, and D’Andra pointed out that she had told Mama Dee that she was worried about her because she was hanging out with Brandi and drinking too much, but LeeAnne tried to side step that, as well, and blamed Mama Dee for taking it out of context and stirring the pot.

As Brandi and LeeAnne yelled in each other’s faces, Brandi continuously pointed her finger in LeeAnne’s face, but LeeAnne took the aggression one step further by actually poking Brandi in the chest.  This led Brandi to tell her to leave the party, and to devolve into tears.  The other ladies immediately ran to her side to comfort her, and LeeAnne was left looking like the bad guy once again.  But Cary had the best assessment of the situation.  She said that sure, LeeAnne was seemingly reverting back to her old aggressive ways, but Brandi had done what she could to drive her there.  And I’ll take it one step further because, truth be told, Brandi’s been out to prove that LeeAnne hadn’t changed from the very beginning of the season when everyone else was trying to give her another chance — and she succeeded, but LeeAnne let her.

As Brandi cried in the corner, playing victim, LeeAnne threw herself on the ground and yelled to the heavens about how “alone” she was, despite the fact that Kameron an Cary were standing right there watching her.  Cary told her to cut the drama, and to get up and act like a grown woman — now that’s a good friend.  Stephanie eventually made her way over and said that LeeAnne didn’t have to leave.

The night ended with beer bongs, slippy slides filled with bubbles, and Brandi on top of a cheerleading pyramid.  Good grief — these women know they’re like 50, right?!  Well, viewers, the fun’s not over yet. The RHOD reunion begins next week–stay tuned!