The Real Housewives of Dallas Recap: Game of Phones 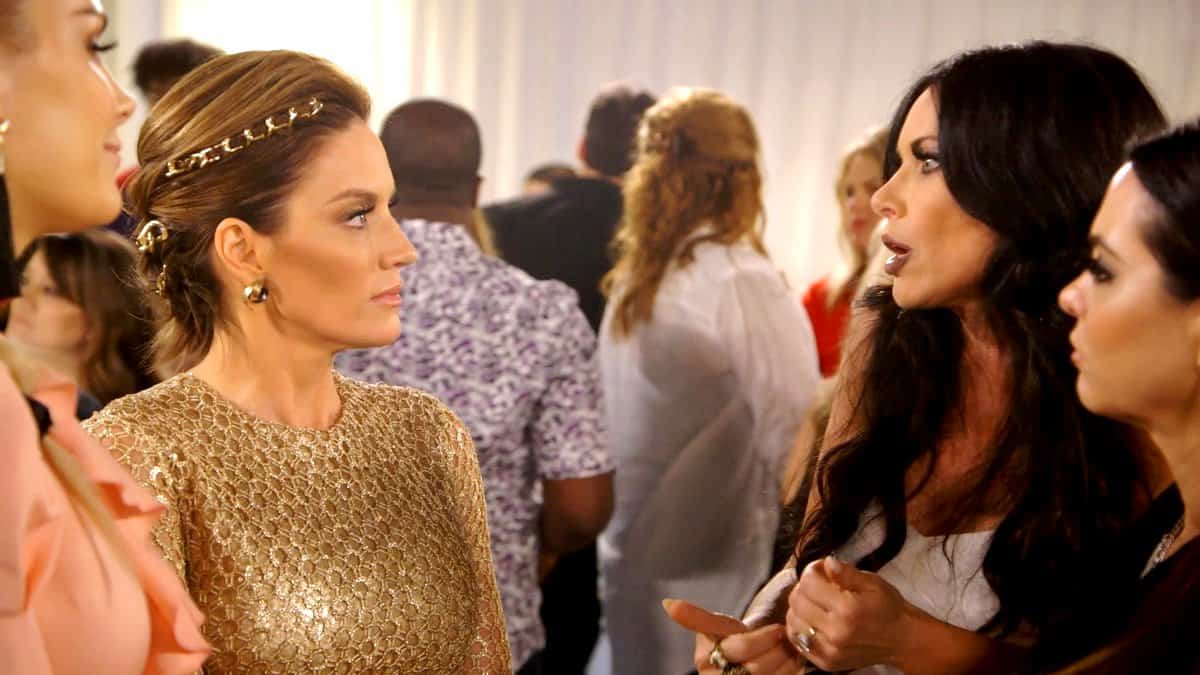 The ladies of The Real Housewives of Dallas are exhausting! I mean, is it just me, or have they basically just been having one long argument for the entire season?! And why do Brandi and LeeAnne even go anywhere near each other anymore? They clearly hate each other with an intense passion. And why do their friends keep on insisting that they do? It just makes for a bad time for all involved.  That was certainly the case last night, as the ladies simply tried to enjoy a relaxing dinner on their last night in Copenhagen. Unsurprisingly, it wasn’t to be.

When we picked up with the crew, Brandi was still yelling at LeeAnne about taking video of everyone while they had been swimming, either nude, or partially nude, in the Baltic Sea.  According to Brandi it was a complete “violation,” and she would be absolutely right about that if it hadn’t all been broadcast on NATIONAL TELEVISION! Seriously, this is an argument that I just don’t get.  You’ve agreed to live your entire life on camera, you chose to swim topless, knowing said cameras were present, and you’re mad because LeeAnne happened to take video on her phone too?! Come on, Brandi, you’re just inventing reasons to argue now.

LeeAnne had said again and again that she had deleted the video (again, not that it mattered because Bravo obviously didn’t delete theirs) but Brandi simply wasn’t buying it, despite the fact that both D’Andra and Kameron said that they’d watched her do it.  But Brandi was undeterred, she continued lashing out at LeeAnne, and pointed in her face, and said “I despise you.” The other ladies were shocked and completely spent.  The poor things just wanted to eat, get to bed, and get home the next day, and a whole new drama was heating up.

LeeAnne remained calm throughout the altercation, which only seemed to anger Brandi even more.  LeeAnne said that she was sorry that Brandi couldn’t trust her, but she’d changed, and she wished Brandi would see it.  Of course, Brandi called BS, she said that LeeAnne may have appeared to have changed, but that behind everyone’s backs, she was exactly the same.  Kameron, who’s surprisingly quick on the trigger when it comes to defending LeeAnne said that LeeAnne never talked about Brandi, and it was only Brandi’s insecurities that made her feel like she did. To prove her point, Brandi brought up the fact that LeeAnne had told everyone about D’Andra’s money woes, as well as the fact that she’d been going around telling everyone that she and Brandi were a couple of drunks.

Brandi then went on to say that she would never trust LeeAnne and that if everyone else were being honest, they’d admit that they didn’t trust her either, and she was sick of everyone being “fake bit**es” and acting like everything was fine all the time. Then she got up, and stormed out of the restaurant.

Everyone felt horrible, after all, they’d all had their fair share of issues with LeeAnne, and what Brandi had said really wasn’t wrong. D’Andra and Stephanie were torn.  Both are good friends with both Brandi and LeeAnne, and neither wanted Brandi off walking the streets of Copenhagen, crying and alone, but they also didn’t want LeeAnne to think that they were choosing Brandi’s side because they could see hers too.  D’Andra was especially distraught because she and LeeAnne had literally just made up, after months of fighting, and they were finally starting to get along and having a good time together again.

LeeAnne assured both Stephanie and Brandi that she didn’t want to put them in the middle, and told them that if they wanted to go and check on Brandi, she understood.  D’Andra called Brandi, and found out she was at yet another bar (but just remember, she’s NOT an alcoholic, y’all!) and she and Stephanie went to join her.  They apologized for not having her back, and listened as she explained that she felt that they just iced over everything LeeAnne did.  She felt better when they told her that they’d admonished LeeAnne for all of her “low blows” and had told her to knock it off.

But the drama didn’t stop there.  Apparently, there was a whole other saga that the cameras didn’t catch. Maybe because it was even dumber than the last one–who knows? Anyway, it seems that LeeAnne lost her phone at some point, and Brandi miraculously “found it” in the cushions of one of the couches in the lobby.  She brought it back to LeeAnne, who assumed that she had stolen it to make sure the video had, in fact been deleted, and snatched it out of her hands without a single word.  In turn, LeeAnne told Brandi that she had “cloned” her phone.  Are you confused yet? I know I was… and so were the other ladies.

First of all, it’s not 2002. You can’t just take someone’s cell phone and go through it anymore.  They all have a security code or facial recognition, or some way to keep thieves out.  And when was the last time you heard of someone “cloning” a phone.  Is that even a thing anymore?! I sincerely doubt it, but, of course, Brandi saw it as yet another violation, and it was all she could talk about. And in Brandi’s defense, LeeAnne is engaged to a former cop and had claimed she enlisted his help to clone the phone. So, perhaps Brandi had a reason to be concerned after all!

In the meantime, LeeAnne was preparing for her fashion show, which would showcase her infinity dress, and hopefully convince buyers and designers to buy the concept, which really is genius–just maybe not cloning smart phone genius.  On the day of the big event, only Cary, Kameron, and D’Andra turned out to support her.  Stephanie was out with her husband for his birthday, and Brandi was neither invited, nor interested in attending.  But the most conspicuous absence was Rich’s. When LeeAnne told D’Andra that he was out of town, it was clear that she had thoughts on the matter, and was nearly choking on the words she wasn’t saying.

The show ended up being a hit, and when LeeAnne was introduced at the end, she was introduced as “The Queen Bee,” and walked the runway in a wedding gown.  D’Andra took both gestures as jabs at her, perhaps rightfully so, but decided not to mention that either. As she congratulated LeeAnne, and told her that she wouldn’t have missed the event for anything in the world, and would have been there even if they weren’t talking to each other, LeeAnne told her that if they hadn’t been talking, she wouldn’t have been invited, which D’Andra also took as a jab, although I’m not quite sure why.  I know I don’t invite people I’m not speaking with to attend events.

LeeAnne also revealed that the phone cloning story had been a farce, and that she’d only said it to drive Brandi crazy.  When D’Andra and Cary admonished her for playing games, she asked why they always seemed to focus on her and what she’d done wrong and never what Brandi had done.  She added that Brandi “stealing” her phone was far worse, than her lying about cloning Brandi’s phone–and, of course, Kameron agreed it was a solid point.

The show faded to black from there, but be sure to tune in to the season finale next week.  You won’t believe this, but Brandi and LeeAnne are going to argue! Stay tuned.