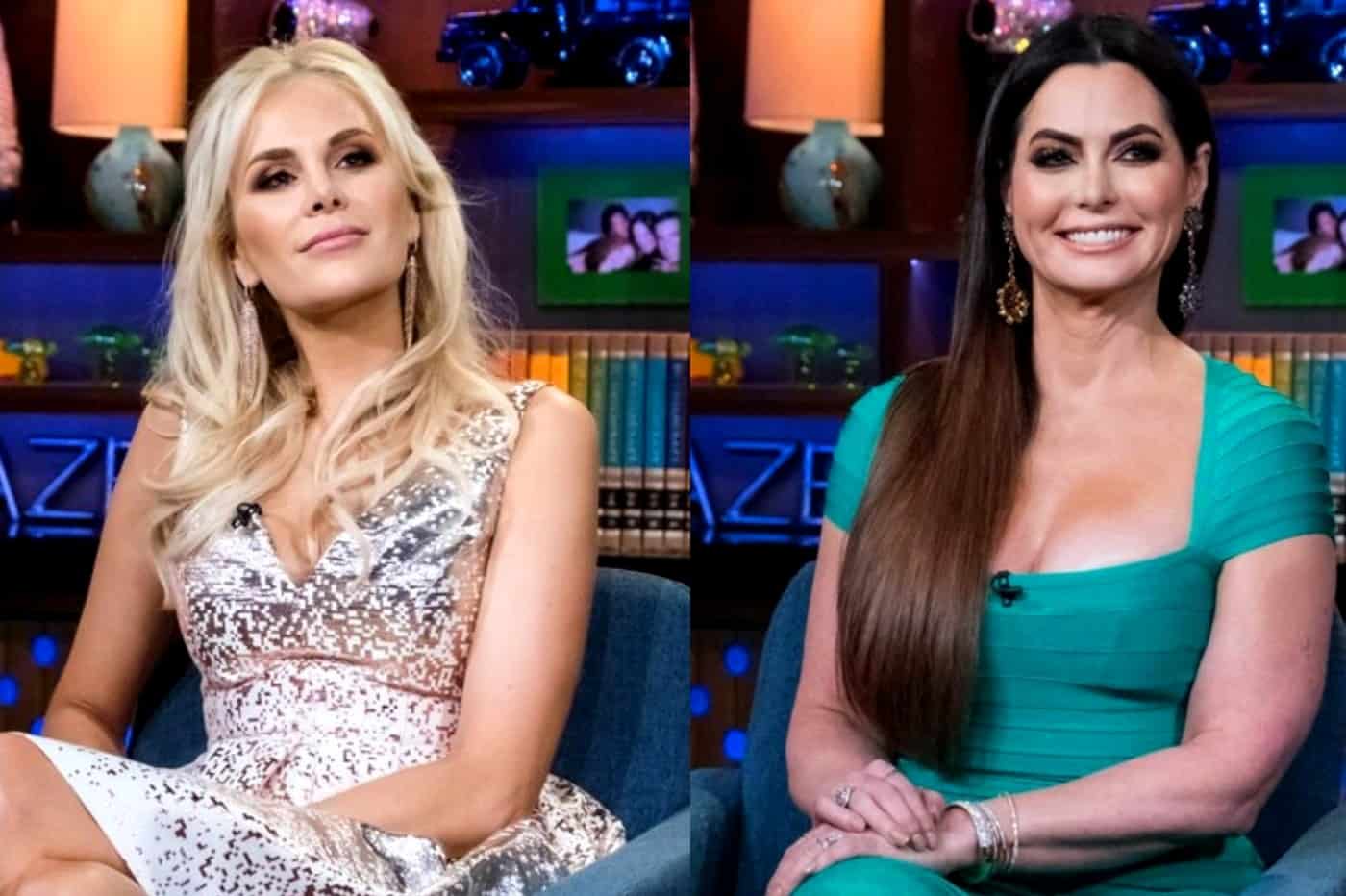 Kameron Westcott took to Twitter after the Real Housewives of Dallas reunion, part one, on Wednesday night to prove one of the claims she made during the show.

After accusing D’Andra Simmons of dissing Cary Deuber‘s skin care business, which D’Andra denied, Kameron shared a video with screenshots of a text conversation she had with D’Andra in April of this year, during production on season three.

Although Kameron also showed texts during the reunion, D’Andra continued to deny bashing Cary’s business, which prompted her to share more on Twitter — and to include the dates and times that her text message with D’Andra were sent.

“Friday, April 13th was [a] few days b4 her skin care party & I couldn’t go bc [my mother-in-law] was receiving Hope Award [with] Orphan Outreach. Again my chat @ the lakehouse which was out of luv must not have been any issue if we r still textin?#speaktruth,” Kameron wrote in the caption of her post.

Those who want it bigger&who need the date! Friday,April 13th which was few days b4 her skin care party&I couldn’t go bc MIL was receiving Hope Award w/Orphan Outreach. Again my [email protected] the lakehouse which was out of luv must not have beenany issue if we r still textin?#speaktruth pic.twitter.com/3wUkZr0xX8

In her first couple of text messages, it was clear that Kameron had told D’Andra she would be unable to attend her skin care celebration, or at least the entire celebration, and revealed she had previously informed the production team that she had another commitment that day.

In response, D’Andra was upset, and voiced her frustration to Kameron that the producers failed to inform her of this.

“I have attended every single housewives’ business event because I was required to-whether I wanted to or not. They never told me that you cannot attend until you told me tonight,” D’Andra explained. 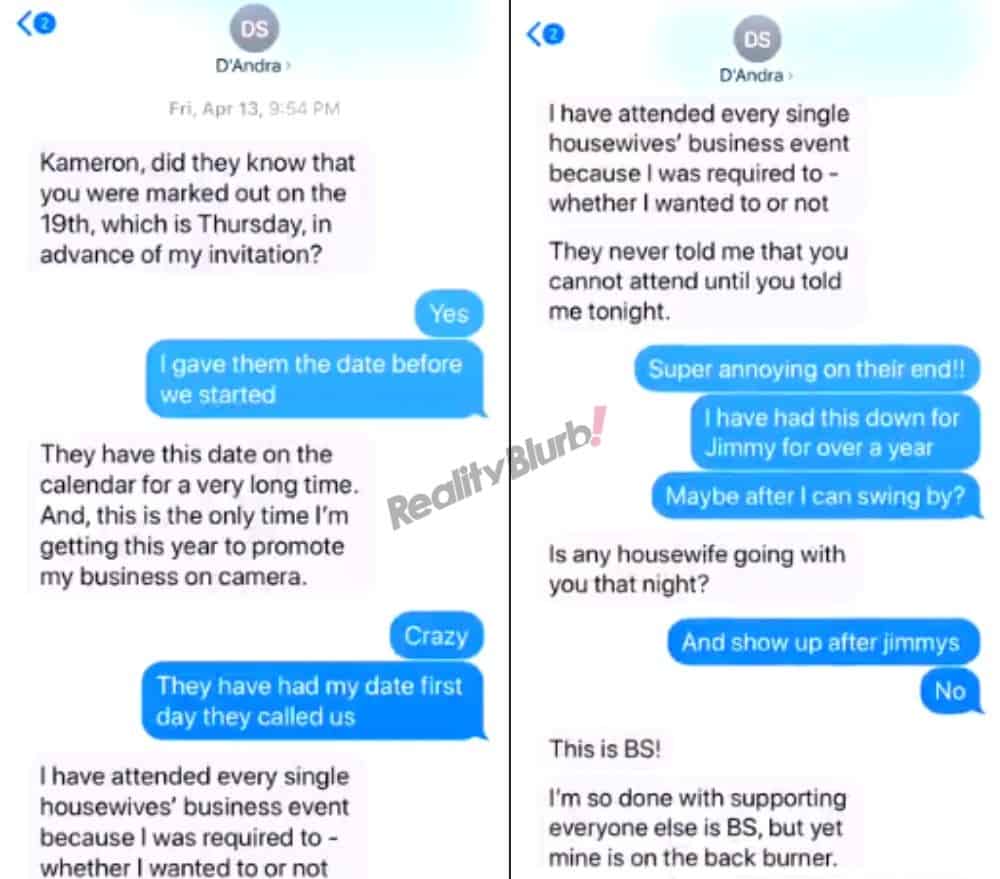 During filming, the housewives are usually required to share their schedules with producers who then try to coordinate dates for events as to ensure they are able to attend as many events as possible. D’Andra seems to imply that if the producers had told her Kameron would be unavailable for her event during the planning stages, she could have picked another date.

“They have this date on the calendar for a very long time. And, this is the only time I’m getting this year to promote my business on camera,” wrote D’Andra. “This is BS! I’m so done with supporting everyone else’s BS, but yet mine is on the back burner.”

The texts then show D’Andra seemingly insulting the businesses of her castmates, including Brandi Redmond‘s clothing business and Cary’s laser place.

“They have known about this date for so long, I’ve had to put up with Brandiland and Lemmon Avenue laser bulls**t center and everything else,” D’Andra continued. “I mean come on, Cary and I compete because we sell skincare products?? And, she and her team have messed up so many people’s faces that I know but I can’t speak about. I have to be nice and play along because it’s the right thing to do. I’m sure Bravo owns a portion of their business.” 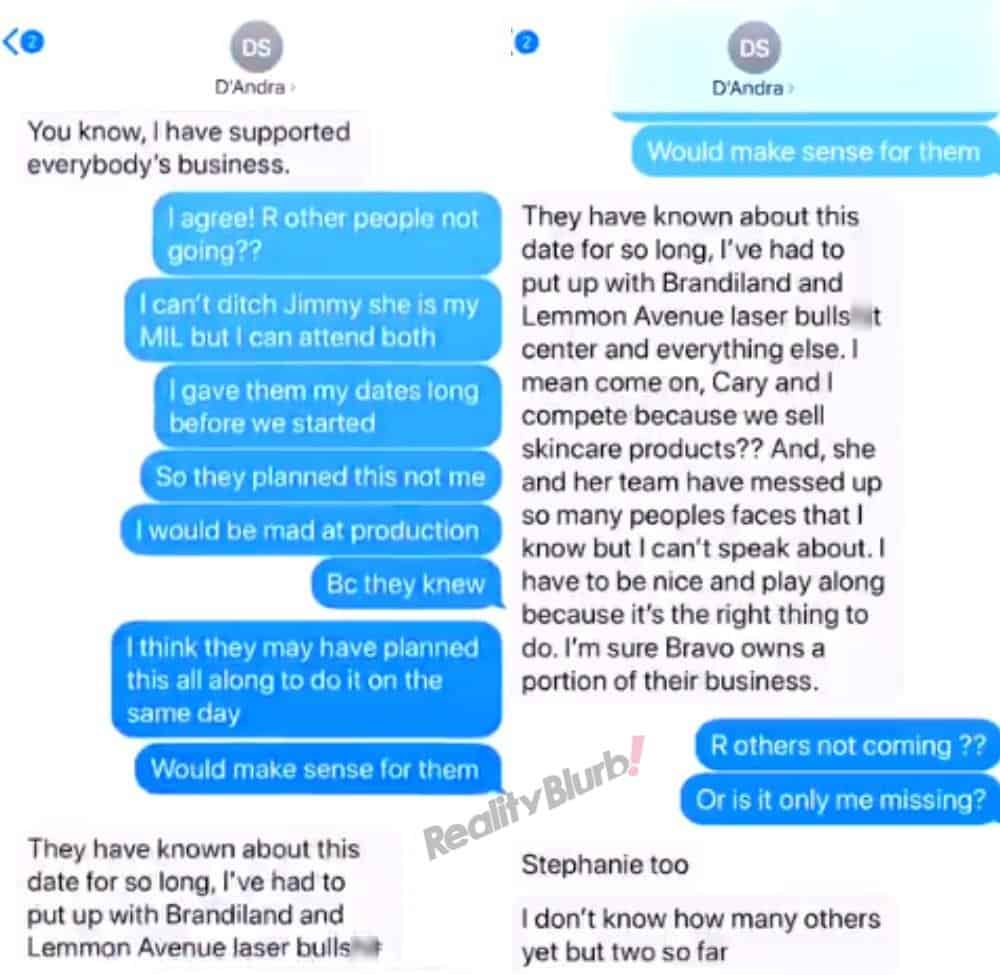 After sharing her first round of text messages from D’Andra, Kameron shared a cryptic tweet in which she suggested more could be on the way.

“Oh and I got lots where that came from! But this is just a wake up call for her. D’Andra needs to majorly check herself! And don’t ever mess with a BLONDE!” she warned.

Oh and I got lots where that came from! But this is just a wake up call for her. D’Andra needs to majorly check herself! And don’t ever mess with a BLONDE! ????????‍♀️

As for D’Andra, she continues to deny sending these text messages to Kameron.

She tweeted, “Since I’m blocked, Kameron knows this isn’t true. If these messages were in your phone, why couldn’t you show it at the reunion? You can believe whatever you want, but these few texts she “showed” was spoofed.”

Since I’m blocked, Kameron knows this isn’t true. If these messages were in your phone, why couldn’t you show it at the reunion? You can believe whatever you want, but these few texts she “showed” was spoofed. #RHOD pic.twitter.com/6bGSWlHC4N

The AT&T phone company also got in on the action after Kameron called on host Andy Cohen to call the company during the reunion to prove the text messages were real.

The second part of The Real Housewives of Dallas season three reunion airs next Wednesday at on 10 p.m. Bravo TV.

TELL US – WHO DO YOU BELIEVE IN TEXTGATE? D’ANDRA OR KAMERON?