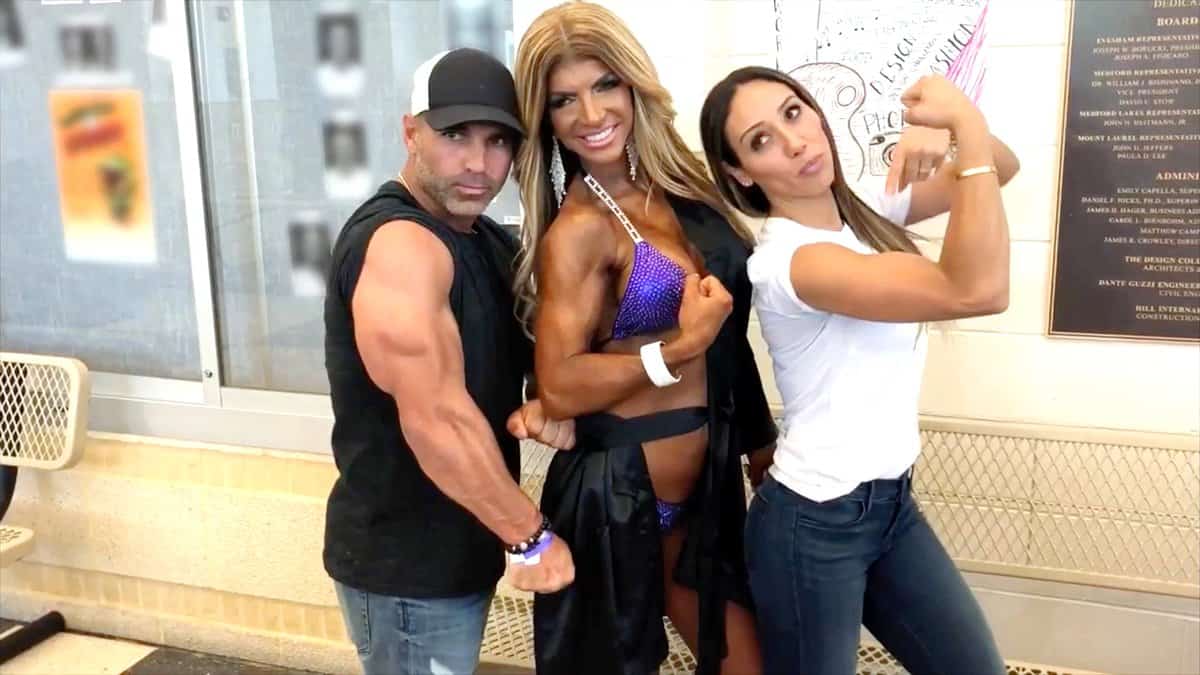 Okay, so there are several takeaways from last night’s episode of The Real Housewives of New Jersey.

First of all, Teresa looks PHENOMENAL! Seriously, say what you want about that woman but she has never looked better in her life. She won her bikini competition, easily beating out women who were probably half her age with half as many kids, not to mention husbands who probably weren’t doing a four-year stint in the clink, and it was well deserved. I just have one teeny, tiny piece of constructive criticism–next time, dial that spray tan back about 20 notches, girl!

The second takeaway is that Jennifer is a horrible drunk. I mean, we knew that, but she outdid herself last night. I was just beginning to like that girl, and then she just went full-on psycho (again) the minute she had a few ounces of alcohol in her.

Finally, these women really shouldn’t travel together anymore–at all–ever–to anywhere. They took off to Mexico last night, and I’m pretty sure the whole thing was a ploy dreamed up by Donald Trump to get our neighbors to the south to agree to pay for that wall after all. I mean when we send the RHONJ chicas, we’re not sending our best. We’re sending loudmouths, backstabbers and drunks, and I’m sure the people of Mexico would like to keep us all on the other side of the border after this debacle. There’s nowhere to start but the beginning, so here we go:

When we picked up with the ladies, Teresa was doing double duty as she was preparing for her bikini competition (and spray tanning herself into oblivion) and playing relationship counselor to Dolores’ ex-husband, Frank, who was training her. Now, granted, Dolores and Frank have a rather unorthodox relationship, and nobody quite understands why they insist on living in the same house together, but it works for them. Besides, is anyone really going to take relationship advice from Teresa?! All the same, she lectured Frank about how his and Dolores’ living situation was likely holding her back from finding true love the entire time they were pumping iron, and he had to agree that it may not actually be the healthiest situation for either of them. Basically, they just need to get back together already and save us all a bunch of time.

In the meantime, Margaret, Melissa, and Jackie thought it would be a great idea to get Teresa a nice gift to commemorate all the hard work she did to get that rocking body, and to show them how proud they were of her, win or lose.  They visited a local jeweler, and found a beautiful necklace, which they engraved with the word, “strong.”  It set them back a cool two grand, but they were happy to do it, and couldn’t wait to see Teresa’s face when she opened it.

Of course, Melissa had bigger things on her mind.  She was finally planning to break the news to her mother that her late father may or may not have a fourth daughter--the product of one of his many extramarital affairs.  Her mother took it in stride, and in fact, said that if this long lost child existed she would welcome her with open arms–just not her w**** of a mother. But here’s the thing, Melissa has absolutely no way of knowing she has another sister. This information is coming from a medium, who told Melissa that she had a third sister. That holds less weight than one of those paternity test episodes of Maury Povich, so why start all this drama and get her mother all up in arms over nothing? I have no idea.

Margaret also had family on her mind.  She’s really trying to get her stepson, Brett, and her ex-husband, Jan to come together again.  Margaret and Jan’s divorce did a real number on the father/son relationship, and Margaret was desperate to help them fix it. She has a soft spot for her step kids, and really hates to see their bond broken. She was also working on her new line of costume-themed hospital gowns for kids–truly the sweetest idea I’ve heard in a long time.  And it must have been making her feel all warm and fuzzy inside because she was all set to make nice with both Danielle and Jennifer on their upcoming trip to Mexico, despite the fact that her last interaction with former had been a total disaster, and she hadn’t fared much better with latter.

After Teresa and Frank Jr. (total Adonis and fellow spray tan addict) won their fitness competitions, it was time to party.  Teresa had been working her buns of steel off and practically starving herself for the better part of a year, and she was ready to be wheels up to Mexico and go to town on some tequila and guacamole with her girlfriends. What could possibly go wrong?  Well, as it turns out, quite a lot.

Everyone started off in a great mood, and Teresa was sure to give a great deal of attention to who would be sharing space with whom.  She took painstaking efforts to keep certain women separated, and made sure that Danielle would be sharing a suite with her, so she could keep an eye on her.  And it almost worked–until they went to dinner.

As the ladies tucked into their meal, and Teresa enjoyed some Patron and was getting ready to taste her first bite of real food in ages, Margaret presented her with the necklace. Teresa was very happy and appreciative and it was a really nice moment until Jennifer loudly pointed out that her brother is a jeweler, and that they all knew it. Melissa said she didn’t actually know it, and Margaret should have feigned ignorance, as well.  It would have been the safer choice, but instead, she said that Jennifer’s brother’s business was all the way out in Long Island and they hadn’t had time to get out there. It was a logical enough explanation, and why should Margaret have to explain herself anyway, but Jennifer wasn’t about to let it go.

She said that they would have gotten a better deal from her brother. They asked her to let it go. Then she said the necklace was ugly and that her brother would have done a much better job. Now the crazy thing is that all of the women, including Jennifer, knew about the necklace, and had, in fact, agreed to the purchase, which they were going to chip in on. When Margaret brought up that fact to Jennifer, she said that she thought they were just getting her a costume piece, and that she never would have agreed to the necklace if she’d known they were going to get real jewelry that wouldn’t be purchased from her brother.

Dolores told Jennifer that she was being rude, but Jennifer seemed to take that as a compliment.  She said that she owned her rudeness and that everything about her was “on point.” Margaret had had it at that point, and having exhausted all of her logical arguments, instead decided to go for the jugular, or rather, Jennifer’s lip liner, which she said made Jennifer’s lips “look like a monkey’s a**hole.”  It was rude, but Jennifer was ruder, and besides, it was really more funny than vicious, but Jennifer went OFF!

She yelled at the top of her lungs, “yeah, a monkey’s a** that you suck!” The other patrons in the restaurant were appalled at the disruption (these women should really start getting private rooms in restaurants) and Jennifer went stomping off. Danielle, also angry with Margaret, was more than happy to go running behind to ‘check on her,’ i.e. go talk smack about Margaret with a willing participant.

Teresa also said that she wanted to check on them, which really upset Margaret, who wanted to know if she was “chopped liver”? After Teresa was gone, Dolores, Jackie, and Melissa consoled her, as they agreed that Teresa’s loyalties were misplaced and her notoriously poor judgment of character was rearing its ugly head.

Now don’t think for a second that this is over.  Things will go from bad to worse next week as the fiesta continues, and Margaret and Danielle nearly come to blows. Stay tuned!