The Real Housewives of New Jersey Finale Recap: Margaret and Joe Throw Marty Into a Pool! 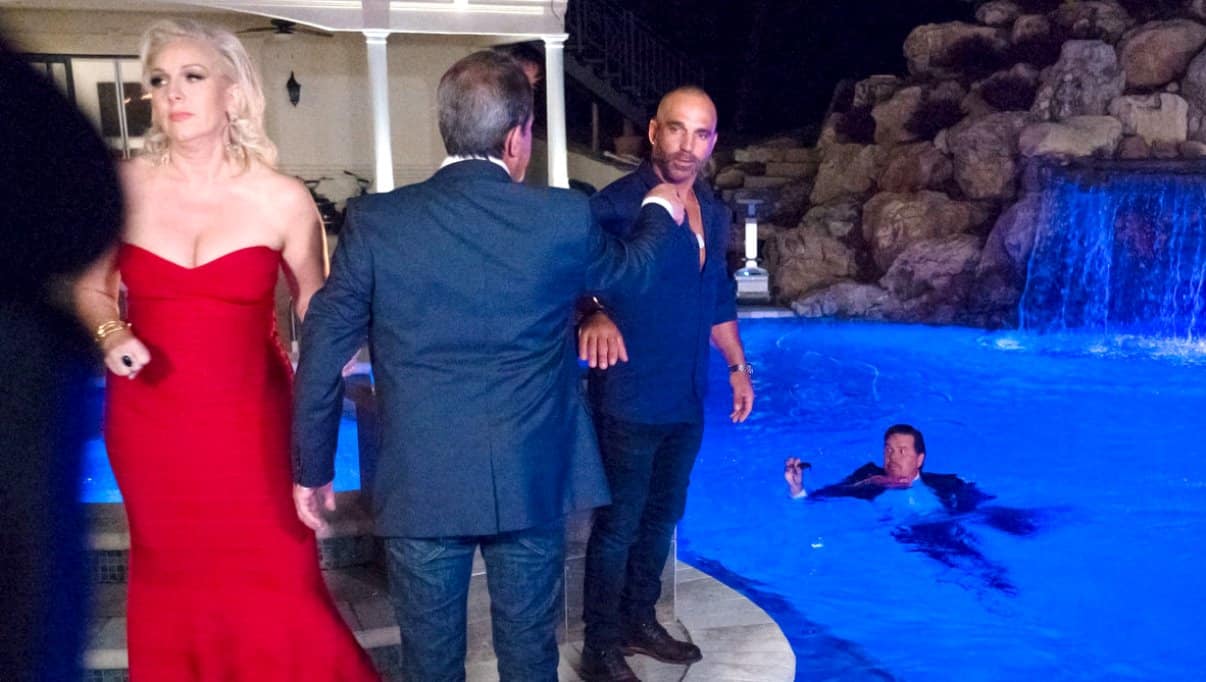 The Real Housewives of New Jersey  closed out the ninth season with a splash, and by the time it was over, the ladies were even more divided than ever.  There was a lot going on.  Ladies and gentleman, please do enjoy:

When we picked up with the ladies, Teresa and Danielle were shopping for dresses for Jennifer’s upcoming anniversary party.  Yes, with the ladies’ relationships in their current state, Jennifer actually thought it would be a good idea to have them all come to her home on the same night for a big, old fancy party! Poor thing.  Anyway, Danielle wanted to know what, if anything, the other ladies had been saying about her since they’d gotten back from their disastrous trip to Mexico.

Teresa, of course, was happy to oblige.  She told Danielle all about her lunch with Margaret, and how she’d told her that despite how she may feel about Danielle, she’d  done nothing to Teresa personally, and that she was still going to be friends with her, the same way she was still going to be friends with Margaret despite Danielle’s feelings.  Sounds like the mature things to do, right?  But Danielle wanted some assurances from Teresa (loyalty is a big thing with these two).  She wanted to know that Teresa would have her back if the “s**t hits the fan.” Teresa assured her that if anyone did, or said, anything out of line while she was around, she’d defend her to the fullest.

Across town, Jackie and Margaret both had family on their minds.  Jackie treated her mother to a day at the salon to celebrate the fact that she had finally called her sister after 15 years of estrangement and that the two were once again on speaking terms.  Her mom was so excited to hear that her children were reunited that she got a full makeover, and washed that gray right out of her hair.

Margaret was hoping for similar news from her stepson, Brett, who has been estranged from his father (Margaret’s ex-husband, Jan)  since their divorce.  They completely ignored one another at Margaret’s charity event, and she was disappointed in them both. She finally got Brett to agree to, at least, the possibility of having dinner with his father, and he finally agreed, which brought Margaret to tears.

Speaking of family dinners, Jennifer and her brood enjoyed a night out at a Japanese steak house.  Well, enjoy may be too strong a word.  They don’t eat out much as a family, and it showed.  The kids were arguing and demanding to be bribed with a trip to Target as payment for eating their food, Jennifer’s husband, Bill chastised her for spoiling them, and she and the children chastised him for being away all the time, either working or hanging out with his friends.  He finally agreed to spend more time with the family, and announced to the children that they would soon be having a big party at their house, which seemed to make them happy and content enough to settle down and finish their meal.

Dolores and Frank came to an understanding about the time they spent together, as well.  Dolores announced that she was finally moving out of the home they’d shared when they were married (and that they’re both still living in).  She said she may move into an apartment on her own, or maybe even move in with her boyfriend, David, but that either way, she was finally strong enough to move on from Frank.  Frank seemed to understand her position, but he did seem a little sad as he kissed her cheek.  I have to say it was a bittersweet moment. Am I the only one who was rooting for these two crazy kids to make another go of it? In the end, though, I’m happy for Dolores, and it’s good to see her doing her thing, and besides, Frank’s not going anywhere, so who knows what the future may hold.

Melissa also had female empowerment on her mind, and she finally sat her husband, Joe down and gave him a talk about how he talks to their daughter when it comes to her future.  Melissa wants her daughter to be strong and independent, and whether that means going into Joe’s construction business, opening a boutique like mom, or going off to college and finding her own way, she wants Joe to understand that she needs his encouragement.

Joe saw the error in his ways, and agreed to all of it–except the “off to college” part.  He wants his little girl at home.  Melissa agreed to shelve the conversation for the time being–Antonia’s only 13, after all. But one thing that could not wait was finding out if she had another sister out there somewhere, and to that end, Melissa took a home DNA test to get closer to finding the fruits of her family tree.  The results haven’t revealed another sibling quite yet.

Later it was time to party, and the Aydins really rolled out the red carpet–literally.  The party was beautiful, if a little over the top, complete with makeshift casino, hookah lounge, and WAY too much of Margaret’s cleavage.  But everyone seemed to be on their best behavior–at least for the first 15 minutes..  Danielle even greeted Margaret with air kisses when she arrived, and Margaret responded in kind, although she was a little concerned that Danielle may have given her the kiss of death a la The Godfather. When Danielle was out of earshot, the other ladies took the opportunity to have a chat with Teresa, and attempted to convince her that Danielle was up to no good, and only sought to divide them.

There was a divide among the husbands, as well.  Margaret’s husband, Joe was still angry at Danielle’s husband, Marty for the comments he’d made about Margaret when they were all at Miliania’s listening party a few weeks back, and he didn’t even acknowledge Marty when he arrived.  When Marty tried to confront him, Joe became angry all over again.  When Joe Gorga stepped in and asked what it would take for them to “be boys again,” Joe said they were “way past” the point of just not getting along.  Marty told Joe to look him in the eye, and Joe called him a “d**k,” at which point Joe Gorga, once again dragged him off to another room so that he could cool off.

In the meantime, the ladies were too preoccupied with their own drama to realize what was happening with the guys.  Teresa and Danielle went outside to talk, and once again, Danielle wanted to know what the other ladies were saying about her, and once again, Teresa was happy to spill the tea.  Teresa told her that the other women had said that she was toxic and divisive, and that, while they respected Teresa’s decision to have Danielle in her life, they really didn’t understand it, and they didn’t want her in theirs.

Danielle said that Margaret was the toxic one, and that it was all reminiscent of season 1 when former cast members Caroline and Dina had tried to poison Teresa against her.  Teresa assured Danielle it wouldn’t happen the same way now. Nearly a decade had passed since then (10 years?! That doesn’t even seem possible! I guess time flies when you’re throwing shade.) and Teresa promised Danielle that she wasn’t going to let anyone else get in the way of their friendship.

And speaking of haters, the Joes and Marty resumed their talk by the pool.  Marty said that Joe should apologize for the things he’d said about Danielle while they were all in Bimini.  Joe said he was just “busting b***s,” which is what guys do at bachelor parties, and that Marty was the one who should apologize to him for insulting Margaret’s looks.  But Marty not only refused to apologize, but he also doubled down on the sentiment, and even took it one step further: he said that Joe was jealous of him because Margaret didn’t have Danielle’s body and that he was ‘always looking at Danielle’s t**s’ because Margaret didn’t have any.  I guess he missed her in that red dress!

Finally, Margaret came outside and saw the men arguing, and demanded to know what was going on, at which point Joe told her everything that Marty had said about her.  Marty didn’t even have enough sense to be ashamed.  He boldly admitted everything, and when Margaret asked him what type of man said such things about another man’s wife, he attempted to justify it by saying he’d only been “promoting” his own wife’s beauty–whatever the hell that means.

The men continued to go back and forth, with Joe poking his finger into Marty’s chest until finally Marty said that Margaret was going to “b**ch slap” Joe when they got home because she was always “emasculating” him, at which point Margaret and Joe pushed him into the pool! As they walked away, Margaret yelled, “now you’re the one who’s emasculated, s**t head,”  and as she and Joe casually sauntered back into the party, they passed Danielle, and she told her matter of factly, “your husband’s in the pool.” When Danielle asked who’d pushed him in (an odd question since no one said the word pushed) Margaret shrugged and said “me and my husband.”  It was classic! I do believe it is my new favorite housewives moment of all time.

As Danielle went to check on Marty, Teresa confronted Margaret, and said that she didn’t care that she didn’t want Danielle around, because she was going to be around.  Margaret said they could have each other.  Teresa was clearly sticking with Danielle, as was Jennifer, who was mostly appalled that Marty’s clothes, shoes, and watch had been ruined, rather than any irrational behavior (I guess she could only be so much of a hypocrite after that scene she caused in Cabo).  Danielle, of course, enjoyed playing the victim, and when Melissa said this type of drama always ensued anytime she was involved, Danielle simply gave a wide-eyed shrug of the shoulders and said “I didn’t do anything.” Girl, please!

Well, the season may have come to a close, but the drama is only getting started–we’ve still got a three-part reunion to get through viewers!  Stay tuned.

TELL US – THOUGHTS ON THE RHONJ SEASON FINALE?