Real Housewives of New Jersey Recap: Break Up to Make Up 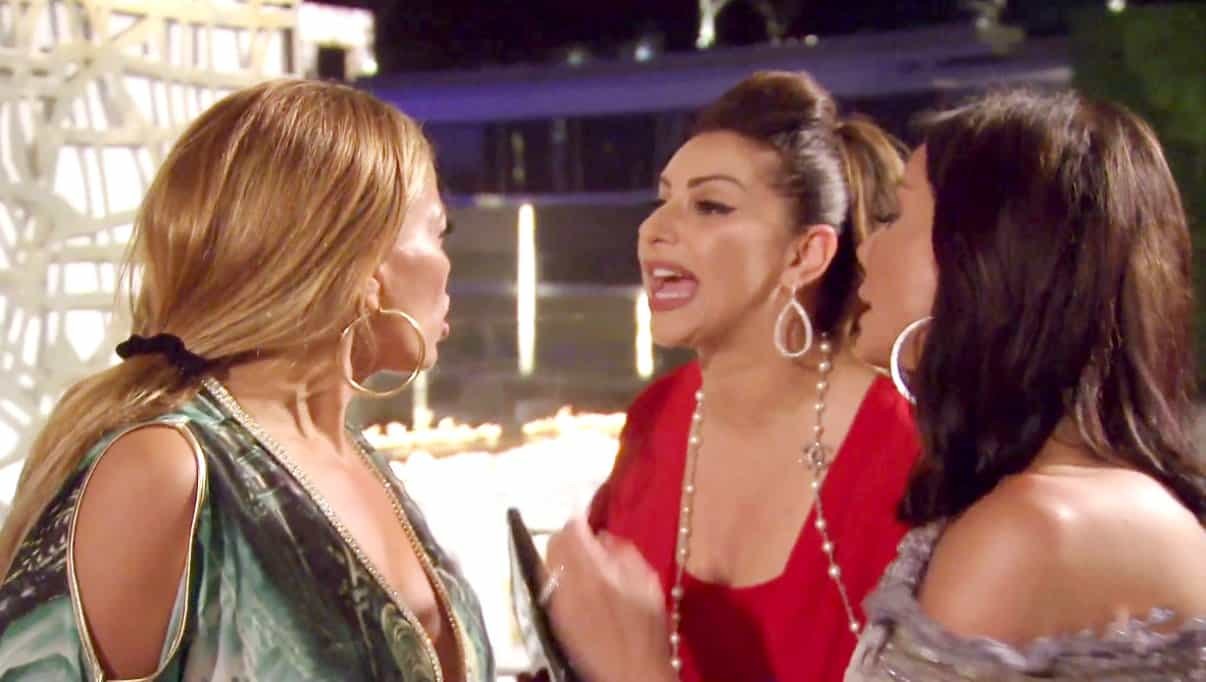 As another season of The Real Housewives of New Jersey begins to wind down, the ladies’ relationships seem to be in a state of flux.

I can honestly say that with just one more episode left in the season — yes, it went quickly, but let’s face it, it’s time — it’s anyone’s guess who will be sitting next to whom on the reunion couches.  People who were besties in episode one are barely speaking, and people who could take or leave each other are now thick as thieves.  But hey–that’s Jersey.

When we picked up with the ladies last night, they were still mid-brawl, and I don’t think “brawl” is too strong a word.  We’re talking wine throwing and breaking glasses over chairs to make shanks–these ladies weren’t playing around in Cabo! Even Melissa, usually the slowest one to anger, looked as though she may have been ready to throw down when Jennifer yielded that broken glass, but after yelling a bit, and warning Jennifer that she had the “wrong f__ing girl,” she thought better of it, and simply stormed upstairs.

In fact, it was Dolores, who was ready to rumble.  She told Jennifer that she should ‘get her a** kicked’ for breaking that glass, which, of course, only further fueled the fire of the very drunk Jennifer, who immediately got in Dolores’ face.  This wasn’t a wise choice.  Danielle quickly got between them, and told Jennifer not to “go there” with Dolores.  This was sound advice–and it wasn’t Dolores she was protecting.  Those two have never gotten along, and I’m sure Danielle would have loved nothing more than to see Dolores get punched in the mouth, but Dolores is no joke! She’s “from Patterson”, as she’s quick to remind anyone who tries her, and she used to be a guard in a women’s prison.  Going toe to toe with Dolores is just not something one does.

Dolores eventually walked away too, and caught up with Melissa and Teresa, who had gone running after Melissa to calm her down.  Teresa was actually defending Jennifer’s behavior, still going on and on about how Margaret had been gunning for her, and how she had said that her husband had a girlfriend.  Now, I still fail to see how this justifies throwing glasses, particularly at Melissa, who hadn’t said a word, and in fact, had scolded Margaret for being hurtful.

Needless to say, Dolores and Melissa didn’t share Teresa’s point of view, either, and she became frustrated with them, and went off to find Danielle and Jennifer.  Funny, isn’t it always Teresa talking all that  “stick with your family” stuff? And yet here she was, taking the side of the newbie over her own sister-in-law and her life long friend.  Oh, how the mighty have fallen!

When she located Danielle and Jennifer, Jennifer admitted that she’d been wrong to break the glass, but Teresa actually comforted her, and told her that she felt bad for her, and that she reminded her of herself.  I guess I can see that. Breaking glasses–flipping tables, tomato–tomahto, am I right? These two are cut from the same cloth, and neither one of them knows how to act.

In the meantime, Dolores and Melissa filled Jackie and Margaret in on what had happened since Margaret narrowly escaped getting hit with broken glass, herself.  They all agreed that Jennifer was a nasty and sloppy drunk, and that they just couldn’t believe that another dinner had been ruined.  As they decided to order up some room service (they never did eat anything) Melissa left them to it, and decided she needed to talk to Teresa. It doesn’t take much for those two to become divided, and they were finding themselves on opposite sides of the battle lines once again, so Melissa thought it wise for them to sit down and talk.  Teresa seemed annoyed when Melissa suggested it, but she met her by the pool anyway.

Melissa wanted to know why Teresa was being so hard on Margaret all of a sudden, and Teresa told her that it had really gotten under her skin when Margaret made the cheating accusations against Jennifer’s husband.  Teresa knows how that feels, she explained. After all,  she’s been dealing with cheating rumors and innuendos about her marriage for years.

Melissa acknowledged that it could be tough, but at the same time, she reminded Teresa that Margaret had quickly taken it back and apologized.  She added that spending so much time with Danielle was poisoning her against Margaret, and perhaps it was time for her to hear Margaret’s side.  She also said that Jennifer had behaved like an animal, and needed to stop drinking, but this only brought Teresa back to Margaret, who doesn’t drink at all, Teresa was quick to point out, and therefore was fully aware of what she was saying, and didn’t have tequila as an excuse.

It was clearly time to call this vacation quits, and luckily, the ladies were heading home the following day.  Finally sober, and after some time to reflect, Jennifer was pretty embarrassed by her behavior.  She was particularly worried about what her husband would have to say about it.  She began by telling him what Margaret had said about his having a girlfriend on the side, and he asked her if she’d like him to have a talk with Margaret.  She declined his offer, and went on to tell him the rest.  He certainly wasn’t happy, but he wasn’t angry, and while he told Jennifer that her behavior had been crazy, he did agree to go along with her to Margaret’s charity event for moral support.  She knew at that point that she owed both Dolores and Melissa an apology, and she wasn’t sure how they would receive it.

In the meantime, as Melissa told her husband, Joe, all about the trip, he didn’t seem the least bit surprised that things had taken such a violent turn (he’s from Patterson too, after all), but mainly he just sees Danielle as a trouble maker, and can’t really understand why his wife or sister have anything to do with her.  He said that Danielle “corrupts everything and everyone around her,”  including her new husband, Marty, whom Joe said had once been “a stand-up guy” and had totally changed since Danielle “got her claws into him.” He went on to say that Danielle was poison, and called her “The Black Widow of New Jersey.” These were uncharacteristically harsh words for Joe, but also a completely accurate assessment.

Dolores and Frank also had a little talk.  He told her he’d been thinking about what Teresa had said about their living situation, and how maybe it was holding her back from being happy or finding love again.  Dolores told him she wasn’t sure exactly what she wanted in terms of her romantic life, but that he was her “safe place,” and she definitely wanted him there in the home with her.

Across town, Teresa had accepted Margaret’s invitation to go to lunch and have a chat.  She began by explaining the demise of her friendship with Danielle.  She explained that it had all begun when Danielle found out she was going to  Dolores’ hatchet throwing party, and warned Teresa that Danielle sabotages all of her relationships, and begins making up stories and lies when she’s upset, and that clearly she was trying to divide the group.

Furthermore, she said that she wanted Teresa to see the many “red flags,” but Teresa said that she trusts people until they give her a reason not to, and as far as she’s concerned, Danielle hadn’t done any of the things that the other ladies had accused her of to her, and until she did, Teresa would give her the benefit of the doubt.  Of course, Margaret hadn’t done anything to Teresa, either, and she assured Margaret that things were fine between them.

The whole ugly situation had Jackie thinking about family, and how she had wasted way too much time being angry with her estranged sister.  She called her, and they both apologized for the rift and said they’d wished they’d spoken sooner, and made plans to see each other soon.

Margaret also had family on her mind, and she invited both her ex-husband (who’s dating her current husband’s ex wife’s BFF, by the way), and her stepson, who haven’t spoken in years, to her charity event, hoping the theme of the event would put things in perspective, and inspire them to squash their issues–it didn’t work.

In better news, she and Jennifer did manage to squash their issues.  Surprisingly, the two women greeted each other with a hug and air kisses, and agreed to let bygones be bygones.  Even Dolores was receptive to Jennifer’s olive branch, and told her all was forgiven, but that she needed to talk to Melissa, which Jennifer was dreading.  But ultimately, Melissa gave her a pass, as well, after warning her not to ever throw a glass at her again.  It wasn’t warm and fuzzy, but hey, it’s Jersey.

This wild, wonderful season comes to a close with the finale next week, and things get pretty explosive for the ladies at Jennifer’s anniversary party, but they’re not the only ones.  Even the husbands get into the act this time—stay tuned!