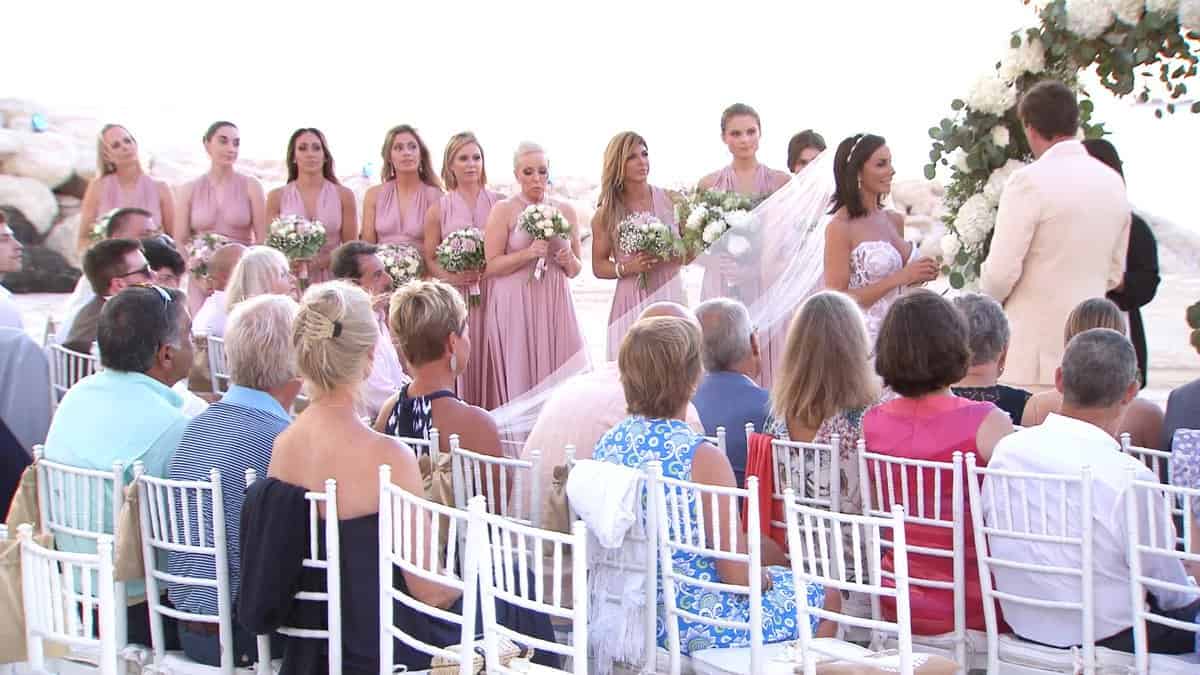 The ladies of The Real Housewives of New Jersey ended the year with more pre-wedding drama, as most of Garden State crew continued their trip to Bimini for Danielle’s wedding. They were still reeling from the events of the evening before, and the messiness they’d witnessed between Danielle and Marty. Melissa, Margaret and the Joes couldn’t believe the way she’d spoken about his children–especially in mixed company.

Teresa, on the other hand, was a little more concerned about her own situation. She was happy that she, Melissa, and Joe had worked out their issues, but she was soon angry again, after she spoke with Dolores, who told her that Jackie had called her for pointers on how to smooth things over with Teresa, rather than coming directly to her.

Later, the ladies met on the beach for what was supposed to be a fun bridal party photoshoot, but as is usually the case with these ladies, it didn’t quite turn out that way. Danielle was being quite demanding, and Margaret felt self-conscious next to the younger, more lithe members of the bridal party.

While the ladies did their best Baywatch impersonations, the Joes took Marty out for some pre-wedding drinks. As it turns out, he wasn’t allowed to have a bachelor party, and they were trying to get the poor guy to have at least a little fun before tying himself to Danielle. But that didn’t turn out so well, either. The guys decided to tease Marty about all the demanding and belittling behavior they’d witnessed from his bride-to-be, and the gentle ribbing quickly turned into a question of his very manhood.  They told him he was “p***y whipped,” and that he lacked “b*lls.” Joe Benigno even took it one step further, and spilled the beans about the $45,000 wedding gown Danielle had bragged about secretly charging to Marty’s black card!

However, Marty insisted that he was happy with Danielle.  He said that he enjoyed the “challenge” and thought she was “hot.” The teasing continued, and eventually Marty got angry, but Joe Gorga laughed it off in an effort to diffuse the situation and stop him from killing Joe Benigno. It worked, but things were still pretty tense.

In the meantime, back in Jersey, Jackie and Dolores had their lunch, and Dolores joked that she felt bad for the others having to deal with Danielle, who was a handful and a half on a regular day, and was surely in rare form for her destination wedding. Jackie agreed, but quickly got down to brass tax, saying that she couldn’t understand why Teresa was so upset at her for bringing up Joe Guidice’s incarceration. After all, she said, it was public knowledge, so talking about it shouldn’t have been a problem. She also said that the way Teresa reacted was way over the top and not the way for an educated woman to behave. Dolores explained that it was very hurtful for Teresa to have it thrown in her face, and warned her against taking an “elitist” attitude, or underestimating Teresa’s intelligence.

But it turns out Jackie’s family has skeletons in their family too (who’s doesn’t?) as it turns out that her parents were in a very similar situation as Teresa and Joe. While she was in college, her father served 6 months in jail for tax fraud, while her mother was on house arrest. Jackie felt that this was something she had in common with Teresa, but unlike Teresa, she was never ashamed of it, and never tried to hide it. But Dolores told her that the situations weren’t actually all that similar at all. She explained that Joe was serving nearly four years behind bars–and facing the threat of deportation–while Teresa was raising their four daughters without him. She has a point.

Back in Bimini, Teresa, Melissa, and Margaret returned from the beach photoshoot, and were horrified to find the Joes drunk, and even more horrified to hear about the way they’d abused poor Marty when they were supposed to be taking him out and showing him a good time. Things had been tense enough, they reasoned, without the Joes adding to it.

On the way to the rehearsal dinner, Margaret announced that the forecast was calling for rain on Danielle’s big day. It was a simple exchange of pertinent information, but Danielle felt like Margaret was raining on her parade, and when it actually did start to rain, Danielle became convinced that it was a phenomenon that Margaret could summon with mere words.

Once the drinking started at the rehearsal dinner, Danielle decided to confront the Joes about the talking they’d been doing with Marty earlier in the day. She asked them if they really believed that she was only marrying Marty for his money, and as they hemmed and hawed, she tried to explain that money wasn’t “as” important to her as love, Margaret attempted to save them the evening by explaining that the Joes had just been trying to be funny, and perhaps had gone a bit too far. But Danielle said that she thought she knew exactly what they were trying to do, and that it all came from Margaret. Margaret was starting to wonder just how powerful she really was. First she was accused of summoning the rain and now she was apparently capable of controlling not only her husband’s words and actions, but Melissa’s too, without even being in the same room with them!

Margaret had really had it, but she tried to hold it together, as Danielle was her dear friend, and they were there to celebrate her big day. Once again, Joe Gorga attempted to make light of the situation, and said that one thing was for sure, Marty was crazy about Danielle, and couldn’t wait to make her his wife.

When the big day finally arrived, Danielle became angry once more when Melissa, Margaret, and Teresa arrived in the bridal suite with wet hair. Danielle said they didn’t have time for full blowouts, despite the fact that her instructions for the bridesmaids had clearly stated that they would get full hair and makeup done by her glam squad prior to the wedding. It was clear, at that point, that even the hairstylist had pretty much had it up to here with Danielle’s whining and demands.

Margaret tried to make things a little easier on everyone, and simply picked up a blow dryer and began to do her own hair, which made Danielle happy–sort of.  She said that she “almost” forgave Margaret for the night before, which led to the two women rehashing all of their tense moments of the last few months. It quickly became too much for Margaret, and she announced that she would no longer be a part of the wedding, and was catching the next thing smoking back to Jersey.

Danielle ran after Margaret, produced a few alligator tears, and begged her to stay.  Margaret finally relented, but said that deep down she knows that she can’t deal with Danielle any longer.

In the end, the wedding was fabulous, albeit a little extravagant for an event that ended up lasting longer that the marriage, but it was sweet, and the looks on everyone’s faces, as they listened to Marty and Danielle vow to remain loving and true to one another till death do them part were nothing short of priceless!

Fear not viewers, we’re only beginning, and the ladies of RHONJ have another half a season left to come, including another blessed event that will be threatened by the ladies’ drama and fighting—stay tuned! In the meantime, you can watch the dramatic mid-season trailer here!