The Real Housewives of Beverly Hills Recap: Eat Your Heart Out 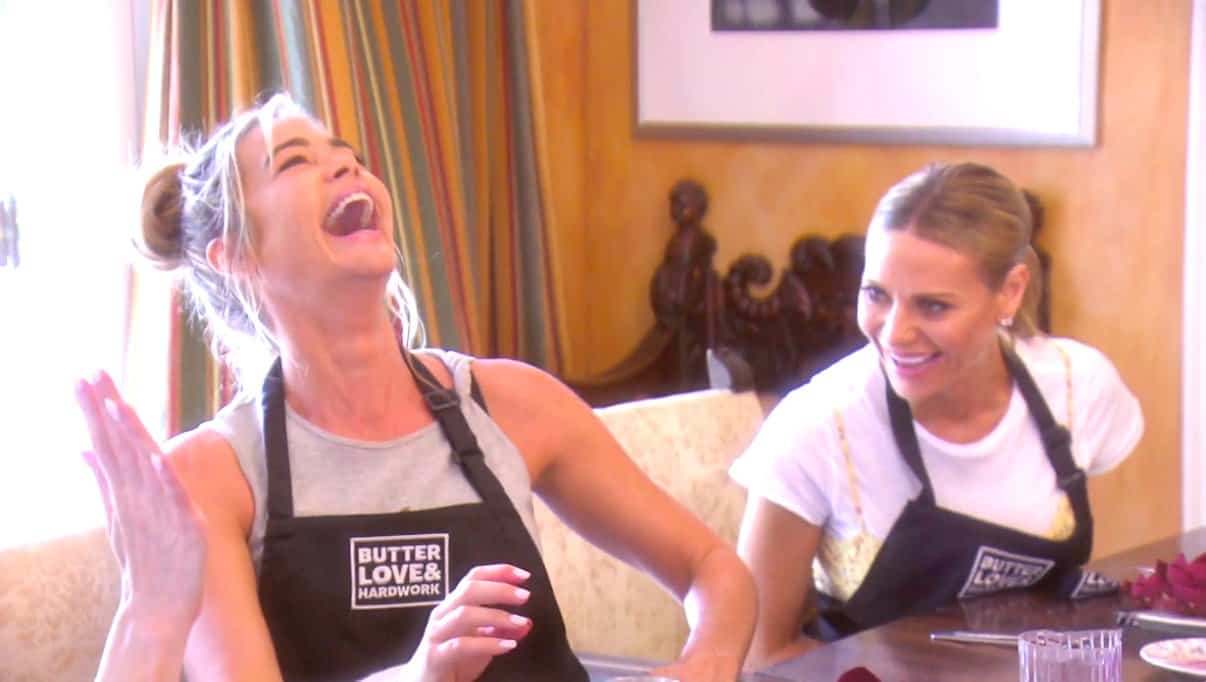 This season is just kicking off and already the ladies are heading off on a girls’ trip! They aren’t messing around on this episode of The Real Housewives of Beverly Hills. (I’m just glad they stopped talking about the Lucy the dog saga for the time being…)

Villa Rosa: the land of swans, ponies, and Lisa Vanderpump. Kyle hops in LVP’s Rolls Royce and the ladies head off for some afternoon plastic surgery to “rejuvenate” their necks. Who are these women? While Lisa huffs on some laughing gas and Kyle films the procedure, the plastic surgeon pokes and prods at the ageless LVP. Just your average afternoon jaunt.

Well, it appears as though Erika Jayne has forgotten her pants for her lunch with the ladies. Luckily, Rinna has enough gold lamé pants to go around. Dorit meanders in looking like an 80’s Barbie and I can’t tell if this is a theme party or a lunch?

Lisa Rinna demands to know what’s been happening and Dorit spills about her recent burglary. Dorit also inches her way into the infamous Lucy the dog situation. All of this stress makes Dorit suggest that she could use a getaway. Erika volunteers, “I think we have a house in Tahoe” and it is insane to me that people who don’t know how many properties they own actually exist. Dorit explains that there is an “exquisite” new resort in the Bahamas and the ladies should all get together to head out on a trip. Yay!

Over in Denise Richards‘ world, life seems pretty average. Her daughters give one-word answers, she cooks dinner, and her boyfriend, Aaron, is a stud who has recently moved in with her. Like I said, normal. Denise explains that the first time she saw Aaron, she thought “he was hot as balls.” I mean, she isn’t wrong… Her relationship with Aaron is much better than with her ex, Charlie Sheen. Speaking of Charlie, he makes a cameo phone-appearance when his daughter calls him to ask about dating. Hilar.

The lives of these women keep getting more and more unbelievable. Take Dorit Kemsley, and her husband PK, for instance. They enjoy a mid-afternoon glass of wine in their matching white button-down shirts and discuss the upcoming girls’ trip to the Bahamas. I love how Dorit casually lounges on their sofa whilst wearing 6-inch heels and PK cheers his wifey on as she intends to invite ALL of the women on this trip (yes, even Teddi).

Rinna and Teddi Mellencamp go hiking, but really they just walk four feet and then plop down on a bench to chat about Teddi’s new acting career. Rinna is absolutely green with envy that Teddi has landed some sort of acting gig. It turns out that Teddi took her acting hiatus because she gained weight right when she came out to LA. Being told she needed to lose weight in order to land a role really resonated with Teddi, hence her “accountability” lifestyle. Now that she feels back on track, Teddi is ready to take on Hollywood again.

Kyle Richards pays a visit to her husband, Mauricio, over at the Agency. Kyle annoys Mauricio with her hypochondriac fears, but also starts melting down because her daughter, Sophia, is going to be heading off to college. Kyle tearfully talks about her daughters growing up and Mauricio does his best to talk her off the ledge. While on the topic of offspring, Rinna and her daughter Amelia Gray Hamlin have an open conversation about Amelia’s past battle with anorexia. Amelia hopes that people in the entertainment industry stop putting up “facades” about how people should look. Rinna tells Amelia about Teddi’s struggles with weight in Hollywood and it makes her feel connected. Because Amelia came out publicly about her anorexia, Rinna is a proud momma.

“We’re doing a sexy time thing here today.” And that would be a statement coming from Rinna, the hostess with the mostest. Because Harry and the girls are away, Rinna has decided to have the ladies over. All but Kyle and LVP are attending. LVP cannot make the get-together because…she DIDN’T FEEL LIKE IT. She told Rinna that she was tending to Giggy, her dog, but the reality is that she is emotionally exhausted and just couldn’t deal with those ladies. I applaud LVP for that. She discusses the Bahamas trip with her husband, Ken, but Ken is adamant that LVP go, despite the fact that Giggy’s health is failing.

Lisa is weighing her options, but decides YOLO- a trip would do her good. “Here’s to fun!”
Rinna has hired a pastry chef to help the ladies bake some goods for their sweeties. Leave it to Denise, to be honest: “I don’t know how this can be called a pastry class to be real.” The reality is that the women are simply decorating chocolates that they are not even eating. What a waste! Dorit officially invites everyone to the Bahamas and they all “whoop it up” in excitement. Somehow, the women’s relationships become the next topic to be discussed. So it turns out that Aaron is still “technically married” (whoopsie) and that “Denise’s boyfriend was/is married to Nicolette Sheridan.” Ready for the bombshell?

Time to pack, y’all! All of the girls are busy putting together way too many outfits for their short getaway. No one is more extra when it comes to packing than Erika-she is busy making mo-ments with her gear.

In the wee hours of the morning, the women head out to the airport to catch their flight…on the private jet. The girls’ trip is set to be “luxurious, glamorous, and fun. First class all the way!” The private jet is full of bells and whistles, snacks and drinks. Dorit, the travel guide extraordinaire, gives the ladies the run-down on the itinerary. Dorit has even planned out who is staying with who. LVP, already being catty, adamantly objects to rooming with Dorit and claims that Dorit has a “terrible snoring…and gas problem.” Something tells me that this one jab isn’t going to be the only issue to be had on this girls’ trip…

TELL US – WHAT ARE YOUR THOUGHTS ON THE RHOBH EPISODE