Home Real Housewives of New Jersey News Andy Cohen and Melissa Gorga Speak Out on Photos of Teresa Giudice with Another Man! Plus Kim D Slams Teresa & Says She’s Been Cheating for Years

Andy Cohen and Melissa Gorga Speak Out on Photos of Teresa Giudice with Another Man! Plus Kim D Slams Teresa & Says She’s Been Cheating for Years 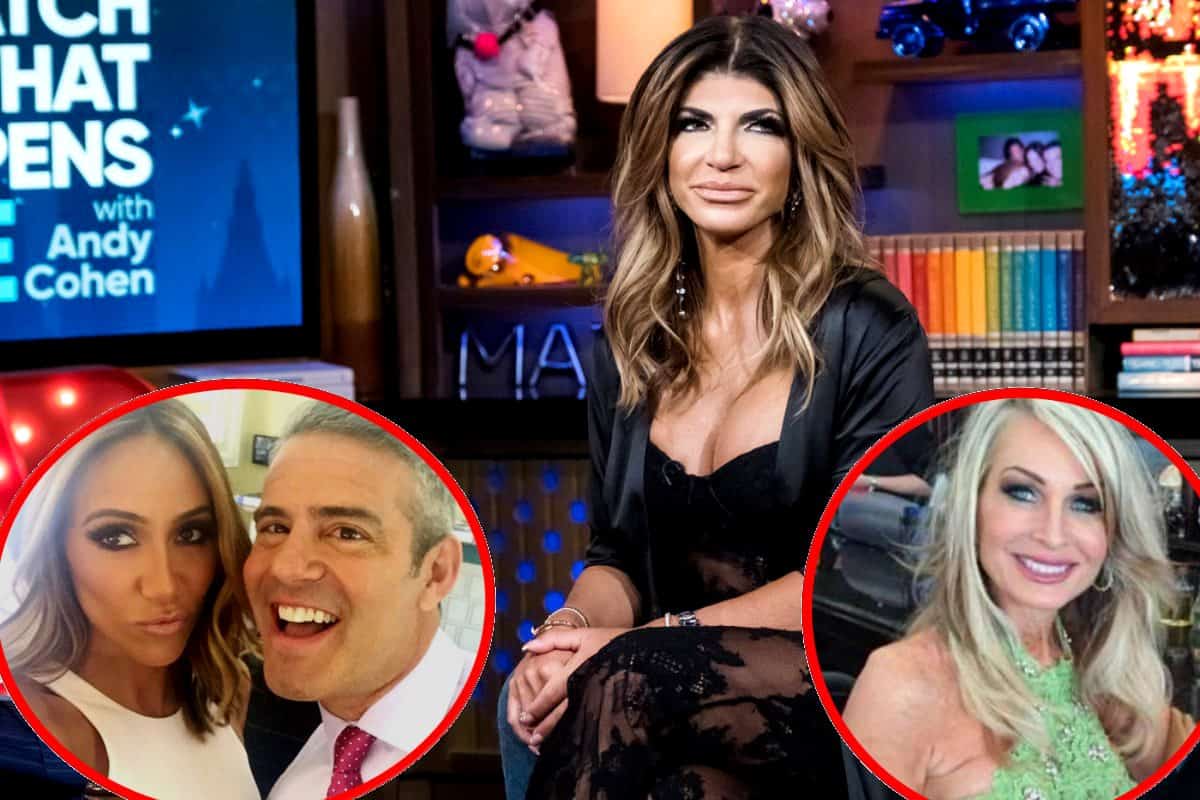 The same day bombshell photos of Teresa Giudice holding hands and getting cozy with another man surfaced, Andy Cohen and Melissa Gorga reacted to the news on Watch What Happens Live. Also, Kim DePaola is speaking out as she accuses Teresa of being unfaithful for years.

On Wednesday, photos of Teresa, 46, holding hands with Blake Schreck, 26, hit the web as the Real Housewives of New Jersey star was accused of cheating on her incarcerated husband, Joe Giudice.

Teresa’s lawyer put out a statement denying an affair, and claiming Blake was simply a friend who was helping her walk to her car after a night of hanging out with a group of friends. However, following this denial, even more, more incriminating photos of Teresa and Blake spending time together were released.

And on Wednesday night’s episode of WWHL, Teresa’s sister-in-law Melissa was the guest, and she broke her silence about the photos.

“No, listen, I know nothing about it,” said Melissa, denying Teresa was cheating. “And I feel like if it were true, I would know something. Come on. She’d be maybe beaming, I don’t know.”

Host Andy, however, had a different reaction, saying he hoped Teresa was seeing Blake on the side.

Also adding in her two cents is the infamous Kim D. who fans will recall, accused Teresa of having an affair on the last season of the RHONJ. Not surprisingly, Kim D. feels vindicated today as she slams both Teresa and Melissa.

“Teresa and Melissa [Gorga] are the two best liars I know,” said Kim D. to In Touch Weekly. “Melissa’s better. Teresa just thinks she’s not gonna get caught, that’s her problem. Teresa’s been fooling around for years.”

Kim D. also reveals almost everyone is aware of Teresa’s alleged affairs, and that one of Joe’s family members even had to ask her to be more discreet.

“I heard a family member of Joe [Giudice]’s came to her and asked her ‘can you please just tone it down,’” she stated. “Clearly, she didn’t tone it down. She don’t give two sh-ts.”

As reported, Blake is not the first young man Teresa has been linked to. Last year, she was widely rumored to have been carrying on with another man named Shane Wierks.

While Shane has since issued a denial of any affair, Kim D. insists Teresa was indeed seeing him, and that her castmates, including Melissa, knew about it.

“I came on the show again and said Teresa had a boyfriend. She was seeing that guy Shane [Wierks]. She was 100 percent seeing Shane” Kim D. shared. “She was texting him when she was on the girls’ trip — they all knew it and they all tried to protect her, Siggy, Dolores, all of them. None of these girls want to go against Teresa because they do that and they end up losing their job.”

The RHONJ airs Wednesday nights on Bravo TV at 9/8c.