The Real Housewives of Beverly Hills Recap: Lisa Gets Called Out Over Dog Drama 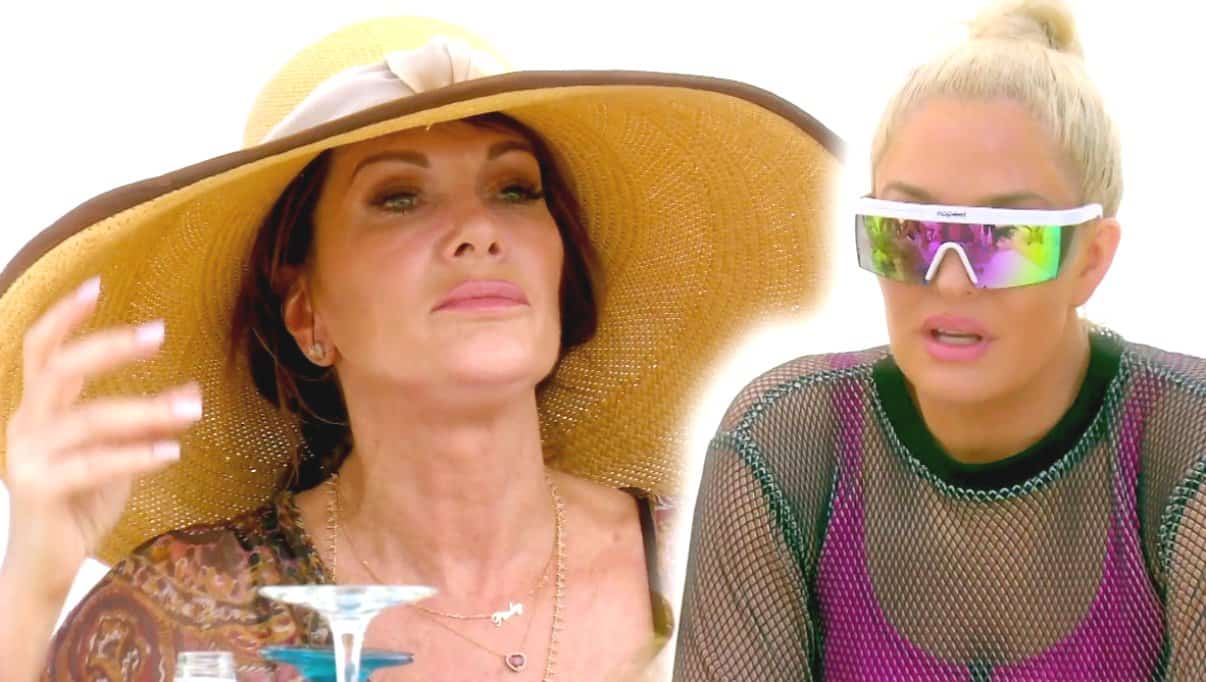 In this episode of The Real Housewives of Beverly Hills, we get to see misdirected emotions and a manipulative LVP in all her fabulous glory.

We left off with the ladies en route to the Bahamas. Nothing quite like traveling on a PJ (Vanderpump Rules reference), am I right?? The resort the women will be staying at is absolutely beautiful and over the top, just like the guests staying there. Each lady gets a butler and they settle into their rooms, but not before they claim beds like 10-year-old girls at a slumber party. Naturally, Erika’s glam squad is patiently awaiting her arrival in the hotel room and I just kind of want a Mikey to follow me all over the globe and beautify me, too.

Up in the chairman’s suite, Lisa Vanderpump and Dorit Kemsley pop bottles and have a little bit of girl to girl talk. Dorit is blatantly kissing Lisa’s a*s and still trying to make up for the whole Lucy-the-dog-debacle. But it’s hilarious to hear LVP behave passive-aggressively toward Dorit, particularly when Dorit boasts about the trip’s exclusivity.

The lengths these women go through to get ready for drinks on Dorit’s patio is hilarious. We have makeup artists, glam squads, and sequins galore. The ladies arrive as if they are walking on a red carpet and they are just doing their best to one up each other….to sit on a patio. The only one who got the memo is Denise – good for you girl.

Dorit runs through the schedule for tomorrow whilst Kyle Richards and LVP talk about LVP’s feelings aside from the group. Lisa is struggling with the grieving process since her brother has passed and she reminds Kyle that life is short. She also tells Kyle that she should mend her relationships with her sister, Kathy, because one day, your sibling could be gone. After having a side convo for far too long, Rinna heads over to break up the secret chatter. The conversation obviously moves to Dorit and the dog, but Kyle didn’t realize Rinna didn’t know the whole story. Rinna is scratching her head and trying to figure out what exactly Kyle is referring to, but LVP does her best to squelch the uncomfortable scenario.

The next morning, Kyle and Teddi Mellencamp have some breakfast. Once Lisa Rinna joins the girls, Rinna demands to know what the heck Kyle was talking about last night. It doesn’t take much to pry the information from Teddi who sings like a canary. Teddi tells the entire ugly tale: Dorit adopted this puppy from Vanderpump Dogs, the dog bit her children, so she gave the dog away to a safe home, only to have that dog eventually end up in a shelter. Long story short, LVP is p*ssed and Teddi has heard about it firsthand. Rinna sits in disbelief and says, “She just set you all up.”

Rinna insists that the whole thing was set up by LVP to make Dorit look bad and I have to admit she might be on to something. Rinna explains that now it’s “messy” and everyone’s involved. Teddi feels like she is part of a scheme and is realizing that it all started because LVP didn’t want to get her hands dirty. Have one of the Vanderpump Dog employees tell Teddi the dirt and then, BAM. It’s only a matter of time before this story goes public and LVP can say she had nooooothing to do with it. Perfect plan, except Rinna is on to LVP and her manipulative ways.

It’s time for the afternoon escapade. Erika: “Do you think that these boys are gonna let me wear flats anywhere? No.” Well, at least you look appropriate, Erika. The ladies are off to a private island where there is a bar, some massages, and lots of sun. I am so jealous. Dorit keeps stating, “nothing but the best, nothing but first class.” We get it, Dorit. Your husband is rich.

While some of the ladies frolic in the ocean and pose like 80’s swimsuit models, Denise Richards and LVP get massages. They talk adoption, as both ladies can relate. Denise further shares that her adopted daughter, Eloise, cannot really talk and LVP listens (for once) and lets Denise know she is doing a great job. After all the serious talk, they get back with the group just in time for lunch.

Rinna loves to stir the pot and calls everyone out for bottling up their feelings. Camille (wait, why is Camille there? Is she an official cast member?) talks about the bumps in the road she has had with Dorit and Dorit shares how she is pleased with how her relationship with Teddi has progressed. LVP gets honest and tells Erika that her “few lines of condolences” when her brother passed were a little “distant” for her taste. Erika Jayne seems befuddled that her condolence note wasn’t good enough for LVP and things take an awkward turn. Lisa suggests that they move on, but leave it to Erika to make LVP feel *this* big.

The other ladies in the group applaud LVP for even coming on the trip and Lisa apologizes to Erika for her emotional outburst. Phew. Glad we got over that one. To lighten the mood, Denise gets egged on to recreate her Bond girl moment and as uncomfortable and it is, it did help get the women to laugh…

It’s dinner time and that means they all need new looks. I mean, Erika even has a Louis Vuitton CAPE to get ready in. What. A. Moment. Rinna pops into Erika’s room and the ladies rehash (one of their favorite hobbies and interests) the whole LVP issue. They make their way to dinner and conversation is pretty light…for now. When Dorit, Rinna, and Denise head off to the bathroom, Kyle takes this as an opportunity to discuss the dog issue with LVP… again. Kyle feels uncomfortable about who knows what and when the girls return from the restroom, Teddi comes clean to Dorit that she knows about Lucy the dog.

Teddi wants to be clear that she “should have never known about” the Lucy situation. Teddi also senses a pattern with LVP. Lisa claims she “has nothing to do with anything” (classic LVP) and Rinna is enjoying the circus unravel before her very eyes.

The rest of the ladies are trying to piece together what exactly Teddi, Kyle, Dorit, and LVP are talking about. Rinna exclaims that this is “bullsh*t and it sounds like a f*cking setup.” LVP tells Dorit that it all went wrong and that she should have just given Lucy the dog back to Vanderpump Dogs. Dorit melts down immediately (looks like all that a*s kissing didn’t work) and can’t believe that LVP would work her manipulative ways with her.

To further get the attention off of her, LVP says, “I had no idea Teddi would be gossiping.” Well, that set Teddi off. She doesn’t like being made a scapegoat for LVP and she tells LVP that to her face, something not many of these women are gutsy enough to do. I hope Teddi is ready to have an enemy for life….

TELL US – WHAT ARE YOUR THOUGHTS ON THE RHOBH EPISODE