Home Vanderpump Rules Scheana Marie Gets Into Twitter Feud with Brandi Glanville After Brandi Accuses Her of Talking Sh*t About Lisa Vanderpump! See the Tweets

Scheana Marie Gets Into Twitter Feud with Brandi Glanville After Brandi Accuses Her of Talking Sh*t About Lisa Vanderpump! See the Tweets 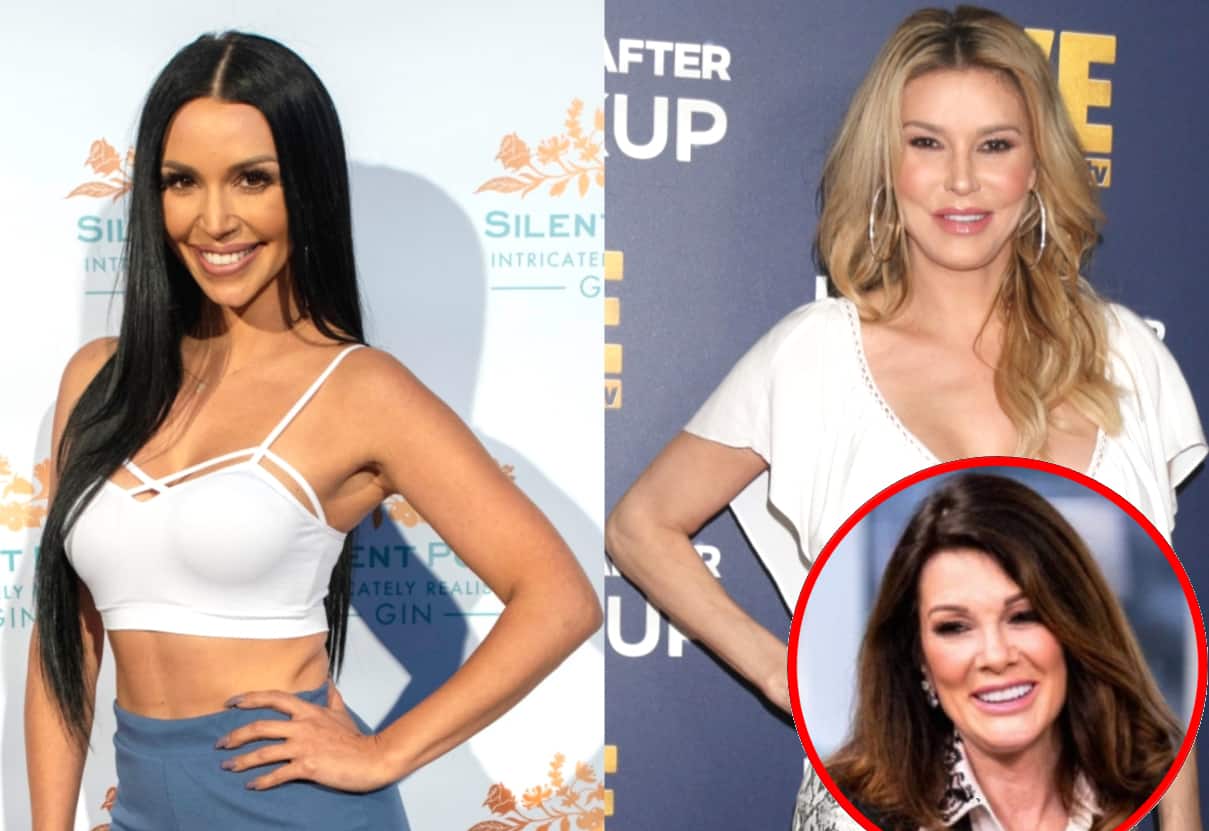 After forgiving the Vanderpump Rules cast member for sleeping with her former husband, Eddie Cibrian, during their nine-year marriage, Brandi took to social media where she confirmed they do not hang out and took aim at Scheana for allegedly talking sh*t about Lisa Vanderpump on her Scheananigans with Scheana Shay podcast.

“I don’t hang out with Scheena but we are fine but if she has no issue with [Lisa] why does she constantly need her podcast producer (mine also!) to edit all the sh*t she talks about [Lisa] out???” Brandi asked in her post.

Brandi’s tweet was actually made during Scheana’s appearance on Watch What Happens Live on Monday night, and host Andy Cohen read Brandi’s tweet to Scheana on air.

“I don’t talk any [sh-t] about Lisa on my podcast,” responded Scheana. “There was I think a comment between Teddi [Mellencamp] and I, it was behind the scenes stuff, like fourth wall breaking that I was like we should just keep that out.”

Scheana also took to Twitter to fire back at Brandi.

“I have never talked sh*t about [Lisa] on my podcast and our mutual producer WILL confirm that,” Scheana replied. 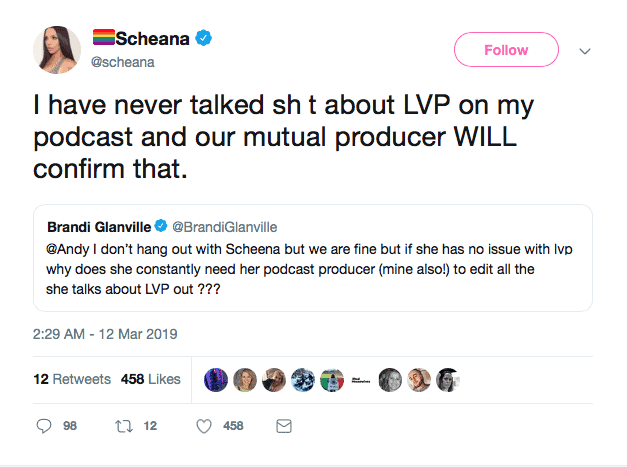 A short time later, Scheana and Brandi’s producer, William Sterling, shared a message on his own Twitter page in which he suggested the former Real Housewives of Beverly Hills star had misinterpreted the comments he made about Scheana’s show.

“Last night something I said in passing about the production of [Scheana]’s podcast was taken out of context to be used as a means of saying I edited her ‘sh*t talking,’ which isn’t true,” he wrote. “Often we have to edit behind the scenes info of [Vanderpump Rules] so as not to give away spoilers.”

In response, Scheana told him, “Thank you for clearing this up!!!”

Scheana also quoted a post from someone else who said it wouldn’t make sense for Scheana to talk badly about Lisa if she knew it would be cut from her footage.

“Exactly!!” Scheana replied. “I’ve never said a bad word about her on my podcast.”

Exactly!! I’ve never said a bad word about her on my podcast. https://t.co/XWXoH6NTxT