The Real Housewives of Beverly Hills Recap: Will the True Puppet Master Please Stand Up? 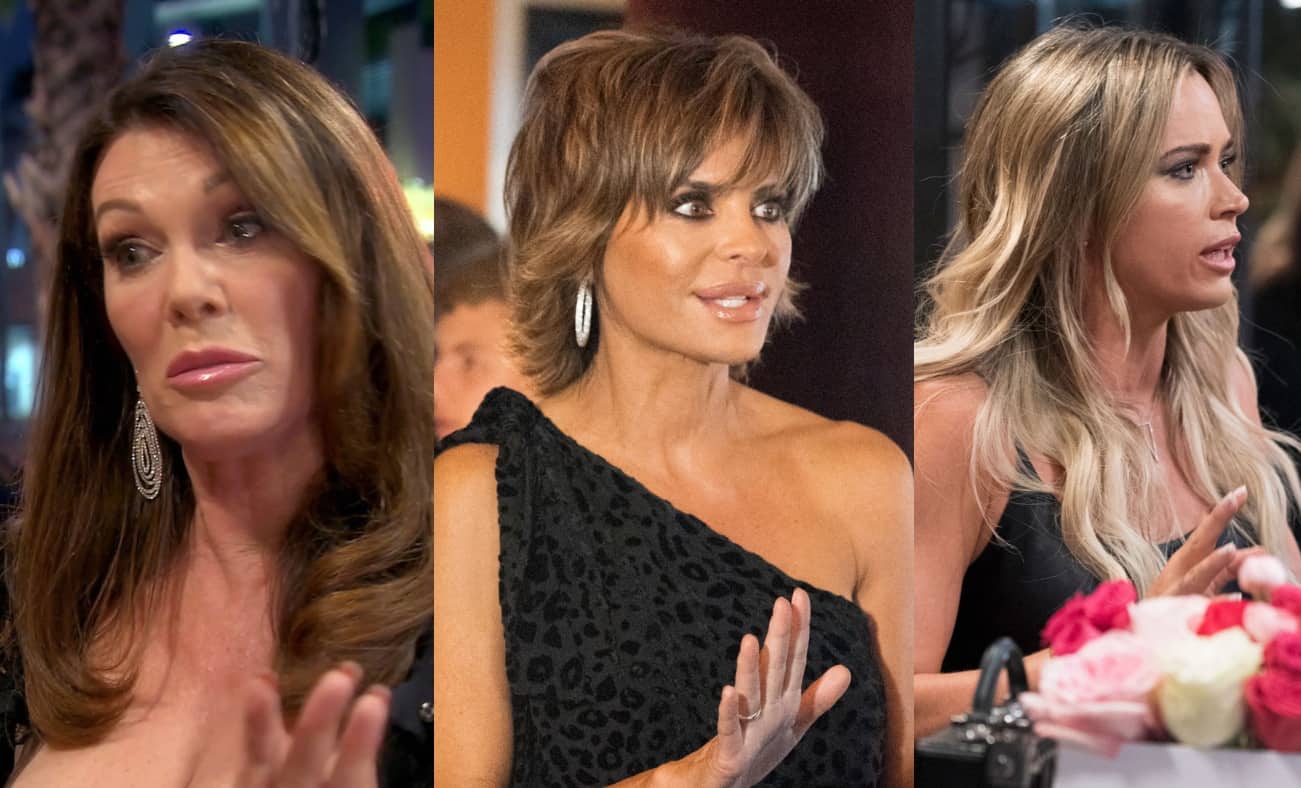 Puppetmaster: a person, group, or country that covertly controls another. In this episode of the Real Housewives of Beverly Hills, we finally find out who the true puppet master is…

The episode opens with Kyle visiting her hubby, Mauricio, at work. When discussing her children, Kyle states that when it comes to them, “We’re extra, what can I say?” You can say that again, Kyle. She bombards her hubby with her own woes (what else is new) and stresses about her TV show American Woman in hopes of getting picked up again.

It’s JMG Magazine photo shoot time. Am I the only one who has never heard of this magazine before? Dorit is still pushing Beverly Beach, her super cool swimwear line, and now she is modeling the newest suits. Who better to style Dorit than Erika? In she walks like she owns the joint, shouting orders and obscene things, such as, “Whatever makes you p*ssy.” Right. Erika is basically Dorit’s modeling coach and as much as I hate to admit it, Dorit’s bod looks incredible. Too bad she’s a total troll.

LVP invites Denise and her daughters over for an afternoon in the castle. Luckily they all head outside because LVP’s house looks like a museum and having children in there would be the worst idea ever. Denise’s adopted daughter Eloise has a chromosome disorder and she doesn’t speak, but she sure is cute. It’s so nice to have Denise on the show. She is a breath of fresh air, given that the rest of the women are all about the drama.

Post photoshoot, Dorit plops down and spills the tea to Erika. She fills Erika in on the text messages LVP showed her. The texts make it seem as though Teddi is directly involved in Lucy the dog scandal. Dorit shares that a text actually said, “Have the dogs at Vanderpump Dogs and I’ll bring it up.” Erika is horrified that Teddi could have potentially lied to her IN HER CHAPEL (as if) and Dorit feels torn by her “friends” and questions everyone’s trust.

Does Rinna’s skin look terrible or it is me? She heads to a venue to meet up with Camille, the soon-to-be-50-year-old-birthday-girl. Camille gets a walk through and begins planning her fabulous 50th birthday party. She worries about inviting all of the girls due to the recent “commotion” in the Bahamas and Rinna acts as the all knowing housewife. Camille further says that she isn’t too sure about Dorit. “There’s a little bit of phoniness. Does she really want a dog or did she want to get close to Vanderpump?” Why is Camille telling this to big mouth Rinna? And why the added drama? Can we just stick to Lucy, Lucy Apple Juicey please?

Meanwhile, Denise and her fiancé Aaron are toasting their upcoming nuptials. Seems like it’s gonna be a pretty lax event, considering her fiancé suggests Denise buy her wedding dress off of Amazon. Good thing Denise shuts that down immediately. I mean, she has enough money to get a stellar gown.

Speaking of…it must be nice to have money. You can call your therapist and have her meet you wherever you want. Take Teddi for instance. Her therapist comes to her in the park. Teddi shares all of the gory details about the dog situation with her therapist. She states that Vanderpump Dogs and Lisa wanted to call Dorit on it. Teddi admits she was involved in the orchestrated event. “I was caddy.” Now this story is snowballing and Teddi just sounds more and more stupid and she tries to talk her way out of this pickle. On top of all of this, Teddi is wigging out because she is going to have to face these women at Camille’s birthday party. Teddi’s therapist tells her it is ok to feel unraveled. She also gets paid to tell her this.

In an attempt to get to know Denise’s fiancé, Aaron, Kyle, and LVP grab some lunch with them. Kyle kisses LVP’s a*s and holds back tears when she has to explain that her show will, in fact, not be picked up for another season. Denise’s entrance certainly changes the mood because she meanders in with her fiancé. Denise gets right to it and tells the ladies that Aaron has a “very big penis.” Sounds like Denise maybe half in the bag if you ask me…I mean, she’s eating food with her hands and has absolutely zero filter. Maybe she’s just nervous?? Whatever the case may be, Denise is certainly not your typical housewife…

It’s time for Camille’s 50th birthday! She looks fab in her sequins and the rest of the ladies don’t disappoint either…although, it appears as though Dorit forgot her pants at home. Also, where’s Harry Hamlin? Dorit, Erika, Teddi, and Camille all gather around and Dorit lets Teddi know that LVP shared text messages with her. The texts totally incriminate Teddi, so naturally, Teddi looks like she is going to puke. FINALLY, she ADMITS to being involved. Teddi adamantly claims that LVP wrapped her up in a scheme and set her up to make her look like the bad guy. Dorit listens, but doesn’t look like she is comprehending. Probably because she is just as confused about the situation as I am.

Also, can you still call it “accountability” if you only own up to it after you’ve been busted?! Can you truly claim you took “ownership” if you continue to say LVP made you do it?! We’ll leave that up to Teddi to decide! And lies by omission are still LIES Ms. I Never Tell a Lie!

Once the Rolls Royce pulls up to the party, Kyle, LVP, Mauricio, and Ken feel the tension immediately. The crew heads straight inside to see Camille, the birthday girl, while Teddi and Dorit hash it out. Dorit appreciates Teddi’s honesty (finally): “She took the bait and she’s accepting responsibility.” Erika is totally team Teddi and she pushes Dorit to forgive Teddi. I mean, Teddi DID admit to being caught up in the lie- she owned it. Unlike LVP… When Teddi and Dorit hug and makeup, Kyle and Rinna insert themselves into the conversation. Slowly but surely, Denise and LVP saunter over to see what the fuss is all about.

LVP looks like a kid caught stealing a cookie from a cookie jar. She thought she had this lie wrapped up like a neat little present, but now that Teddi has turned, LVP is floundering. She does her best to remind everyone that Teddi was “guilty by omission,” which is not false. LVP also refers to Teddi as “Miss f*cking avoidability” (LOL). LVP and Teddi go at it and LVP says a lot of things that mayyyyybe she should have kept to herself.

She spills to Teddi: “Of course I knew you knew [about the dog].” Wait, what? If you could see my face right now… So it is 100% true that LVP did this whole ordeal to stir up sh*t. Who has time for this? Teddi’s apologizing to Dorit and calling LVP out. “I feel betrayed by you.” Teddi is on fire. Dorit is realizing that LVP may not be quite the friend that she thought she was and it seems as if nothing gets resolved, except maybe the relationship between Dorit and Teddi.

In case you forgot due to all of the unnecessary drama, it’s still Camille’s birthday party and the girl still needs to blow out some candles. She makes a lovely speech about love and respect, which is incredibly ironic considering all of the crap going on. At least Kyle gets wasted. That certainly changes the direction of the evening for a bit. She dances…does splits …she’s a real entertainer.

On the ride home, Dorit tells PK what went down…PK believes that LVP is not 100% herself these days and Dorit feels like she just needs to “numb herself” of the fact that LVP did play a part in the scandal. Yea…that part is puppet master, Dorit.

But the biggest puppet master in Puppy Gate? That role goes to Rinna! Without Rinna, this storyline would have ended a few episodes ago after LVP asked everyone to drop it. But no! Lisa ‘What’s Her Storyline Again This Season?’ Rinna smelled blood and with glee in her eyes during the Bahamas trip, put the idea into Teddi’s head about Lisa “setting her up.” And once again in the Bahamas, Rinna stirred the pot by bringing up the dog issue during the group dinner. So yes, LVP might be a puppet master but some of the other ladies are learning how to play the game and perhaps beating LVP at her own game!

TELL US – WHAT ARE YOUR THOUGHTS ON THE RHOBH EPISODE? WHO DO YOU CONSIDER TO BE THE PUPPET MASTER?