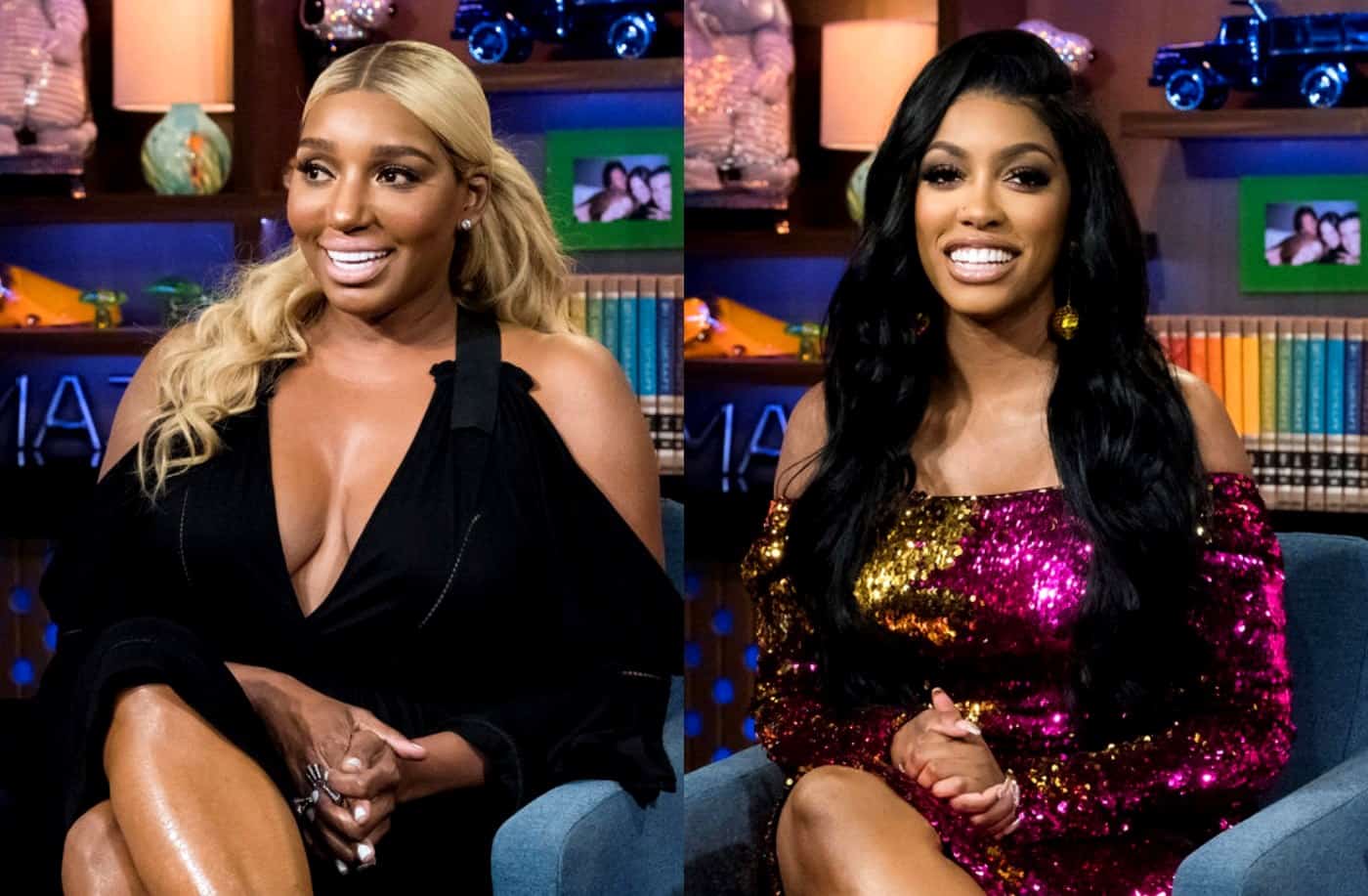 There’s drama brewing between Porsha Williams and NeNe Leakes. The two Real Housewives of Atlanta stars are battling it out via text messages, that Porsha decided she wanted to share the messages on her Instagram account.

In the screenshots shared by Porsha just moments ago, she shows how NeNe calls her a “big fat hungry b*tch” just six days after giving birth to her daughter, Pilar Jhena.

“This is what my so called “Big sis” sent me last night 6 days after giving birth,” wrote Porsha in the caption of her post. “@Neneleakes is so miserable and ain’t happy for nobody… Yes I posted this since you wanna go on live and speak on me yet again.”

In the texts, NeNe denies that she ever put her hands on Porsha when she was pregnant during the episode where NeNe rips a cameraman’s shirt in hopes of stopping him from filming her closet. She was furious that her co-stars, Porsha, and Kandi Burruss, walked into her closet without her permission.

“You lying a** big fat hungry b**ch! You know I never put my hands on you!” wrote NeNe. “Marlo, Cynthia nor Kandi can EVER say that! You want an excuse for going in my closet without my permission so you can talk yo fake s**t on IG all you want but remember my house is lit wit cameras.”

NeNe then reminded Porsha of how she was there for her last season when Porsha was on the outs with most of the cast.

“Don’t forget who was by your side & saved yo wack a** when u pulled Kenya off that sofa. Don’t forget nobody f**ked with u in San Fran or in Spain but ME!”

NeNe ends her text by saying if she had put her hands on Porsha, the then-pregnant star would know it. 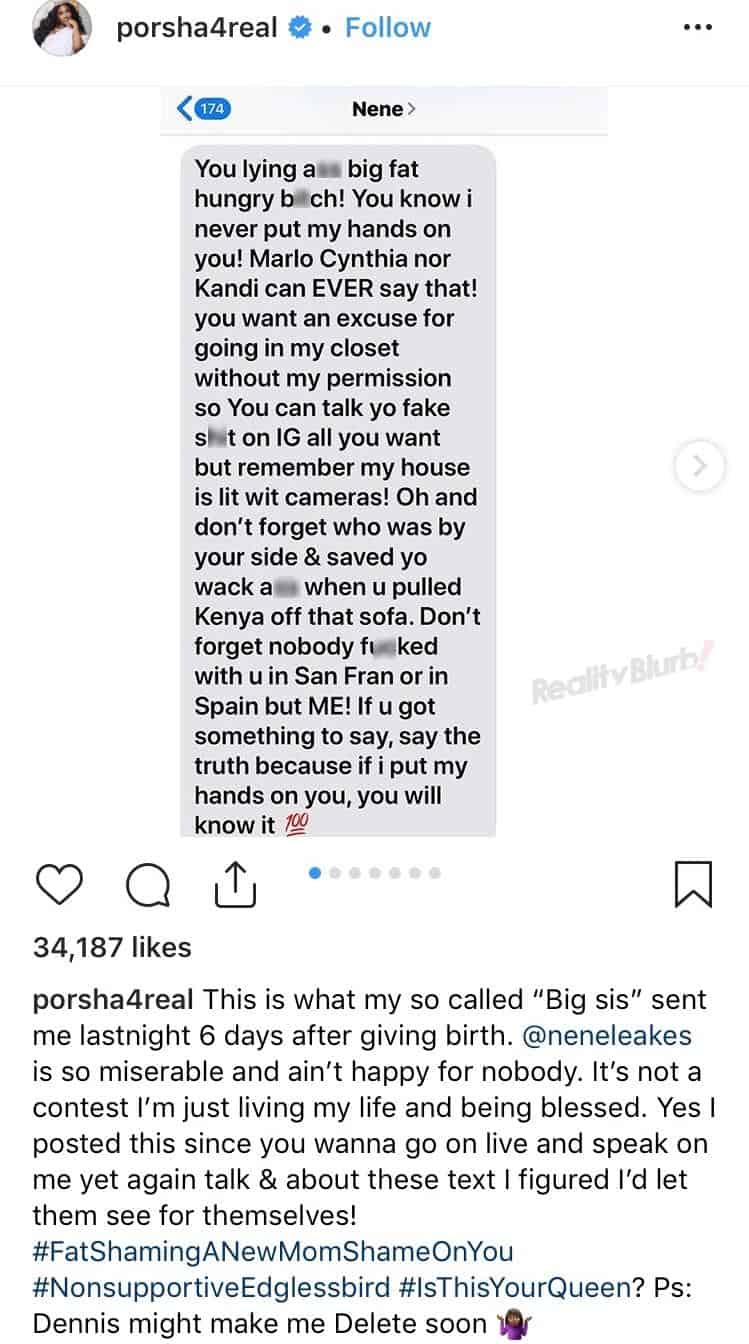 In more text messages, NeNe also shades Porsha’s new spin-off show called Porsha’s Having A Baby, a spin-off show that will document her pregnancy journey during the last three weeks of pregnancy. The birth will also be featured.

The texts show NeNe is clearly not happy for her RHOA co-star, reminding Porsha that she had more episodes in her wedding spin-off and that she won’t be watching Porsha’s baby special. 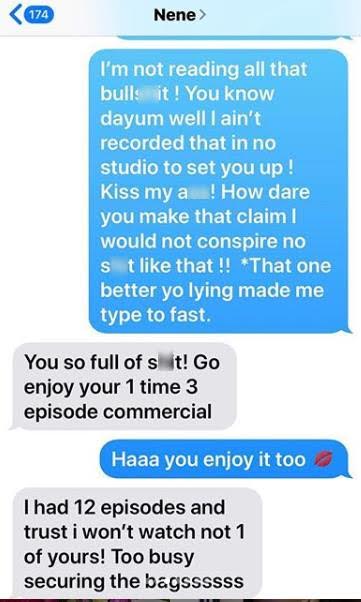 NeNe texted Porsha after learning that Porsha had called NeNe a liar after NeNe claimed Porsha had recorded her screams from the closet scene in a studio. Confused yet? It sounds like NeNe wants viewers to believe that Porsha had filmed additional audio to make the scene look worse than it was, making her look like she had put her hands on a pregnant woman.

She wrote, “@porsha4real This is what i sent you after you gave birth! I sent you text messages last nite after i saw on social media what you had said. I could have responded back on social media but i decided to text rather than do that! I know you need viewers to tune into your 3 episode commercial, which is why you doing the most! Bye ankles #HBIC.”

The Real Housewives of Atlanta airs Sunday night at 8 p.m. EST on Bravo.