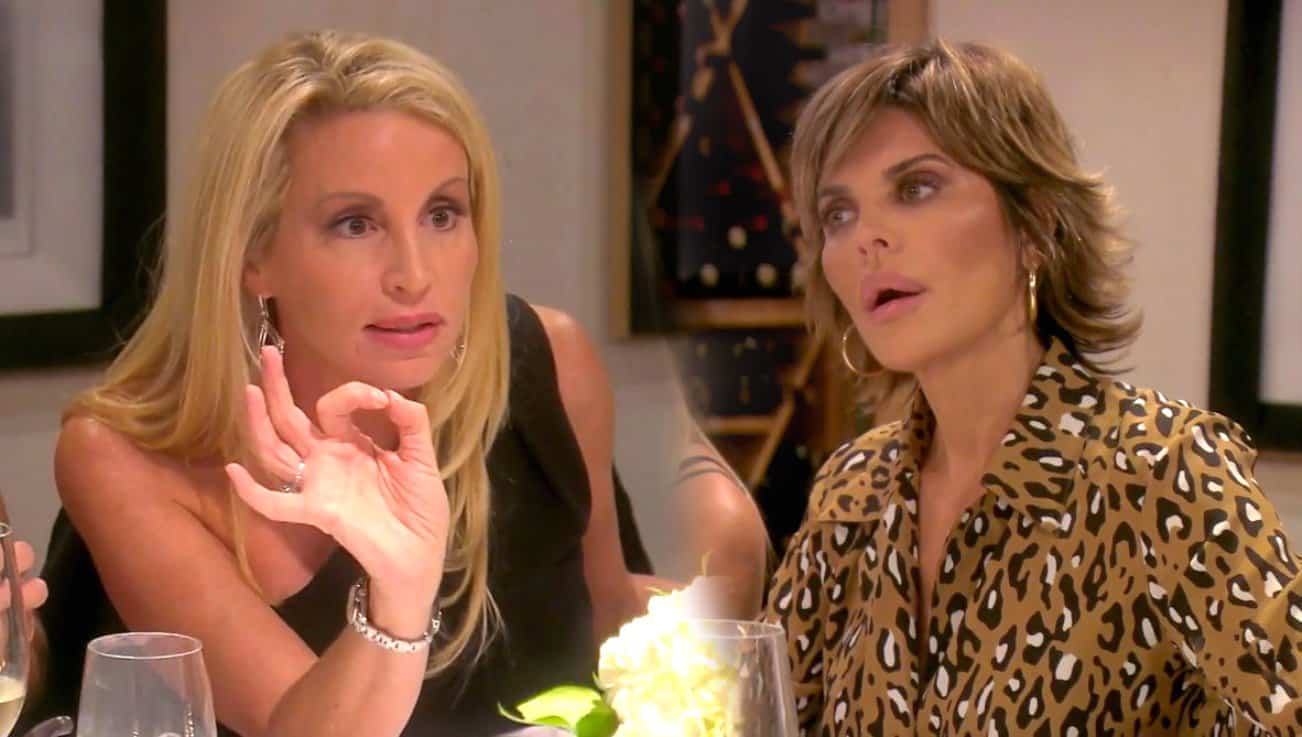 This episode of the Real Housewives of Beverly Hills opens with Dorit and Denise. Who knew this duo would hit it off?

I mean, Denise is so down to earth in her Malibu house…she even put a blanket on the sofa so Dorit doesn’t get dog hair on all of her ensemble of the day. Dorit explains that PK and LVP are very close- they are in fact, like brother and sister…if sister didn’t invite brother to her birthday party…but that’s just a minor detail. Denise tries to give some sage advice to Dorit about the tabloids and Dorit shares her frustration with wanting to go back to trusting LVP.

Back in Beverly Hills, Kyle is prepping for Camille’s bridal shower. She has her hands in everything, particularly the seating arrangement. Kyle hems and haws where to sit LVP, but the reality is, LVP ain’t coming to this event. LVP is far too busy with her own life. I try to feel bad for LVP as her multi-bazillion dollar kitchen remodel ensues, but it’s impossible. LVP explains that she is happy to be rid of the old kitchen because it brings back bad memories of Kyle.

How many leopard print articles of clothing does Rinna own?! My goodness. Camille, the bride-to-be, makes her entrance. There’s lots of air kisses and fake hellos, but one lady (besides LVP) is clearly missing from the party: Erika Jayne. She is just SO busy. “I’m in tour hell.” Only 7 days away “from greatness” (aka her performance in Jersey), therefore, rehearsing is the only option. Regarding missing Camille’s shower during this hectic time of her life, Erika retorts: “Camille, I’ll catch ya next wedding.” Ouch. Erika gyrates on the floor and humps the air before she nearly loses some teeth after knocking her chin on a dancer’s knee. Just a day in the life of a diva I guess.

It’s no surprise that LVP doesn’t show up to Camille’s shower….it’s also no surprise that Kyle stands up to make a speech. Lord knows she loves the spotlight. Where are Camille’s real friends? Speaking of friends, Kyle is apparently back on good terms with her sisters again. Phew. I can’t believe Camille is “disappointed” that LVP isn’t at her shower. She feigns that they are tight, but based on the way she was talking about LVP’s gums last episode, they aren’t quite as chummy as she thinks. The other women recommend Camille shoot LVP a text and tell her that she was missed at the shower. You know, to just stir up drama or something.

Kyle and Portia whip around in their Vanderhall….a mere $29,950 dollars. I love how Kyle tries to bring some normalcy to Portia’s life by bringing her to the grocery store. Kyle is so busy trying to be a show off that she doesn’t even realize that she is jeopardizing her family’s food intake due to her vehicle choice. Ridiculous.

Rinna, her “model daughters,” and her mother, Lois, head over to the plastic surgeon. It’s obviously Rinna’s home away from home- I mean, have you seen her face?! Rinna and her daughters are trying to pop Lois’s plastic surgery cherry. The Rinna clan acts like a commercial for the plastic surgery center- bopping from one treatment to the next. Lois just stares as if they are zoo animals and you can tell she is thinking this is pure insanity.

Later, a dinner is set up to celebrate Lois’s visit and all of the ladies are invited to attend. Okay, what ice skater’s wardrobe did Kyle raid for that get-up? At least she is appropriately dressed for dinner with 90-year-old Lois. Kyle probes Camille for the deets about the text conversation between her and LVP regarding her absence at the shower. Camille tells Kyle that LVP told HER that she wasn’t invited to Camille’s shower. How convenient that Kyle was the party planner…and how convenient for Kyle to shriek “un-be-lieve-able” upon hearing this tidbit of information. Kyle is equally mad at Camille for not standing up to LVP. Camille should KNOW that LVP was 1,000% invited to her shower………or was she??? That WOULD be a Kyle low blow…

Rinna shares that HarryHamlin isn’t at this dinner because he is glued to the Kavanaugh hearing. Camille comes out of left field saying that she isn’t sure that Kavanaugh’s accuser is telling the truth. She believes that the accuser doesn’t have enough witnesses and finds it strange that only NOW the woman is pointing fingers. Despite the recent #metoo movement, Camille gets heated and p*ssed off. She states that just because this woman is a doctor, doesn’t necessarily mean what she says is true. Camille explains that she has been attacked herself in the past, yet has a hard time being sympathetic towards this woman. She claims that she is “really impassioned” about this topic and starts raising her voice.

Poor Lois is just sitting there like, I thought this dinner was supposed to be fun. Kyle just wants to change the subject because she is too dumb to understand what is going on so she yells out, “I’m just gonna say that my mom always said never talk about religion, politics, or sex in a public place.” Like a switch, the ladies settle down…that is until…

OH. MY. GOD. Kim Richards is at the restaurant! Can you even believe it?! She is sitting the floor below them! Rinna claims to be fine with seeing Kim again, despite the fact that the women left things on a bad note. Kyle leaps up to interrupt what looks like a date and says hello to Kim. Upon heading back to the rest of the ladies, Kyle bumps into a sobbing Camille on the steps. Camille tells Kyle, “I feel so bad about the political conversation.” She blames her tears on the fact that she, too, has been blamed for things she “hasn’t done.”

In the midst of her tears, Camille asks Kyle to be one of her bridesmaids. Well, that was awkward… You know Kyle is p*ssed she didn’t get some sort of cheesy Pinterest-esque box of champagne and picture frames. When Camille gets herself together enough to sit back down at the table, she tells Rinna, “I’ve been a victim of a smear campaign” and that hit a nerve with her when the Kavanaugh discussion began. These women have an uncanny ability of making everything about THEM. “Un-be-lieve-able.”

The next day, Lois claims that last night’s dinner was “wild.” Rinna believes that the political conversation was timely and then we hear a crazy tale about how Lois was attacked a few years before Rinna was born. This man tried to rape and kill Lois, but luckily, a military policeman saved her. Turns out that when this guy got out of prison, he went on to become “The Trailside Killer,” a serial killer! Who knew Lois experienced such a traumatic event? Rinna explains that her mother was overprotective because of her ordeal, but that Lois never really talked about the incident. Rinna further says, “I think the least we can do is show these victims compassion.” Lois tells Rinna that she thinks her story is why she is living such a long life and proceeds to tell Rinna that she, too, will live a long life. A 105-year-old Rinna? I don’t know if I can handle all of that…