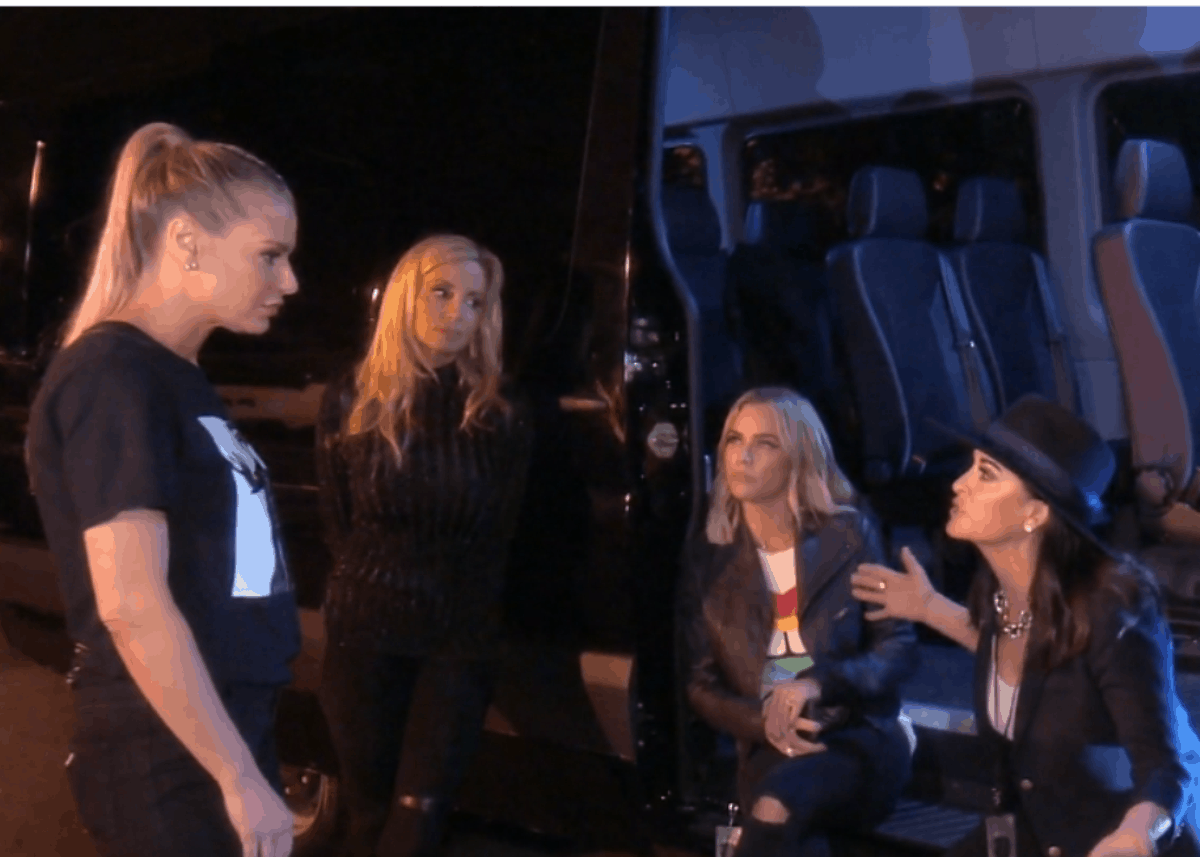 Besties Teddi and Kyle are bringing their mini-me daughters to a children’s makeup company. Turns out that Portia, Kyle’s youngest daughter, simply LOVES make up and therefore, Portia is going to be part of the “campaign” to be a “model.” Naturally. Whilst Portia and Teddi’s daughter, Slate, get done up like clowns, Kyle cries about a cap-sleeved bridesmaid dress she has to wear for Camille’s wedding. Obviously, Kyle makes it all about her. What else is new?

Later in the convo, Teddi shares that her hubby got an RV for tailgates at a football game, but that she would like to get the ladies all together for a camping trip. I’d pay a large lump sum of money to see these women CAMP-camp. Could you imagine Erika Jayne in a tent starting her own fire without Mikey, her creative director?

Speaking of Erika, Rinna, donning a…you guessed it…leopard print baseball cap FaceTimes Erika Jayne. Erika’s on tour in Jersey and is evidently attending a 3-D movie afterward. Did you get a load of those “Gucci” glasses?! Rinna fills Erika in on the dinner debacle from the night before: Camille told the table that LVP told HER she wasn’t even invited to Camille’s shower. Erika pretends to be interested, but in reality, she simply can’t wait to get back to her life as a rock star.

Denise and her well-endowed husband, Aaron, pump some iron and talk about the dinner. Denise shares that she is having lunch with LVP. Denise wants to serve as the mediator for LVP and the other women because, ya know, she has had plentyyyy of experience dealing with a mediator due to her divorce from Charlie Sheen. Now that her daughters are growing up, Denise becomes emotional reflecting on her children’s childhood and worries that she may have f*cked up a lot of things. If you didn’t already f*ck them up, then you certainly will after they watch you on this show talking about your sex life like every 14 minutes.

Dorit arrives at Kyle’s compound along with her “little cuties.” The women sit down with some rose and Dorit discusses the upcoming Boy George concert that all the women are set to attend. In case you forgot, Boy George is Dorit’s family friend…but don’t worry, she will remind you of that any chance she can get!

Villa Rosa is bustling through the kitchen construction and LVP has no problem busying herself erasing “every memory” that occurred in the house from the past 3 months. LVP explains that she has distanced herself from the other women, but feels as if Denise deserves some of her time. Translation: LVP knows that Denise is not the sharpest crayon in the box; therefore, she does not see Denise as a threat. The women meet up for an elegant lunch. Denise attempts to let LVP know that the other girls do care about her, despite the recent drama. LVP doesn’t buy it, doesn’t care, and doesn’t show any signs of rekindling a friendship any time soon.

In the meantime, Kyle whines to Dorit that LVP never admits to mistakes. “She freaks out. She bolts.” Dorit, always worried about herself, still can’t fathom what SHE did to be cut out of LVP’s life. It seems like Denise is getting nowhere fast with LVP. LVP holds a valid point and states that if these women are her true friends, then this argument should not have escalated to this point. LVP respectfully declines the RV trip invitation and I don’t blame her.

Erika and Rinna roll up to Teddi’s new place prior to the big Boy George concert. LUCKILY, Erika is able to make the event, being that she just returned from her Jersey show. Kyle and Camille join the crew and despite the recent political meltdown at the dinner, the ladies decide that tonight’s all about partying.

Meanwhile, at the concert venue, PK shares with Dorit that he has phoned “Kenny.” It turns out that PK talked Ken into having lunch. The Kemsley’s are desperate to be friends with LVP and Ken again because, without them, they are nothing. No, I just made that up, but really, being friends with that couple certainly boosts their popularity.

On the way to the concert, Erika brags about selling out her recent show and Teddi tells the girls that she sent a text to LVP: this text is lame and we all know that LVP will NEVER respond to her Teddi Bear. Camille still won’t get over LVP not showing up to her shower and old issues continue to resurface because that’s what these women do best.

Dorit parades Boy George around like a show pony. The women fall all over him in the green room and nearly die when Boy George calls LVP “rude” for not attending the concert. Dorit shares with the ladies that PK spoke to Ken today. You can see Kyle turning green with envy, as Dorit and Kyle have this bizarre obsession with winning over LVP. Kyle has hopes that perhaps PK can have a breakthrough with LVP and Ken and help Kyle weasel her way back into LVP’s life. There’s not a lot of time to discuss the particulars because another special guest enters the green room at that moment. Billy Idol causes Rinna to bare her shoulders and swoon. It’s gag-worthy watching her.

When Culture Club hits the stage, the women mom-dance to the beat. Gladys Knight joins him on stage and Dorit goes wild. The ladies have a lovely time grooving the night away and enjoy the positivity. We all know that this good time gang will unravel before the night is over. Post-show, they fangirl around Boy George and PK sits there adding his two cents whenever he feels it necessary. His British humor goes a step too far when he tells Kyle, “You can’t even get on with your best friend.” Kyle, obviously, takes the joke to heart, as she is 75 margaritas deep and has to be the most self-centered woman on the show.

The truth is that Kyle becomes p*ssed off because Dorit and PK have the chance to get back in with LVP and Ken. Kyle claims that she has been defending Dorit the whole time and Dorit is the reason Kyle and LVP’s relationship is on the rocks. Good try. Kyle storms away angrily and her posse follows close at her heels. They gather around a seething Kyle who snorts things about PK like, “By the way, good luck having sex with your wife tonight,” while Dorit plays damage control with PK. She tries to reason with him and explain how that statement could have been hurtful to Kyle, but PK scoffs as he is just happy to have “won” over Ken and LVP first, so he knows he is the real winner at the end of the day.

Kyle blows the whole situation out of proportion as always and Dorit tries to settle the conflict by claiming PK was simply using “British humor.” Teddi tries to insert herself into the conversation between Kyle and Dorit, but Dorit dismisses her. Kyle reminds Dorit that “the whole fight has been about protecting you!” Um, no Kyle. You are not a saint. It’s hilarious watching these women compete over LVP, a woman who seriously wants nothing to do with either one of these trolls. Once Dorit is finished with Kyle, she apologizes to Dorit for snapping, too. Kyle is stating she is not going to carry a grudge, but we all know carrying grudges is one of Kyle’s favorite hobbies and interests…