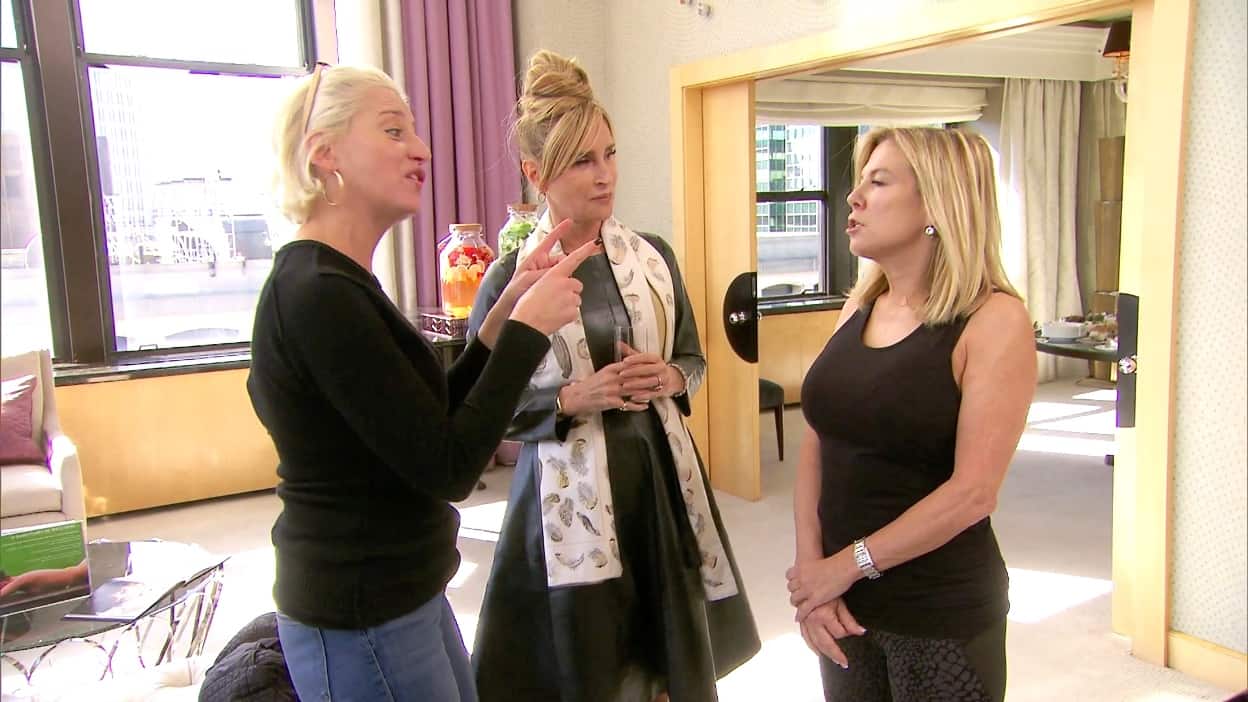 The Real Housewives of New York City returned last night, and all I can say is thank goodness these women have each other because I can’t imagine how anyone outside of the group could possibly put up with their antics.

When we picked up with the ladies, Bethenny and Sonja were headed to Brooklyn to pay a visit to Sonja’s friend’s art studio, although art studio may be a strong word for what amounted to an odd space filled with live parrots, rabbits painted on every surface, and old photos of the ladies before they were Housewives.

But  Bethenny and Sonja really didn’t have art on their minds anyway.  They were too busy discussing Tinsley’s meltdown during Bethenny’s dinner party last week.   As you may recall, Bethenny “dared” Tinsley to call her boyfriend, Scott, and she began crying about how angry he would get if she called him with the other ladies around, and how difficult it was to walk the tight rope their relationship had become.  The women had been shocked by her reaction, and even seemed sympathetic to her situation, but last night, Bethenny and Sonja both chalked the whole situation up to a ‘user getting used.’ As far as they were concerned, Tinsley was using Scott to “get back on her feet” following the mess with her DUI arrest a few years back,  and the subsequent toll it took on her social status and pocketbook. Furthermore, they surmised that Scott was using Tinsley for something pretty to have on his arm, and the two deserved each other.  Sounds about right.

Across town, surely suffering from burning ears, Tinsley attended her first Al-Anon meeting with Luann at her side. Luann had suggested Tinsley look into the support group for the families of alcoholics after Tinsley had confided in her about growing up with an alcoholic father.  After the meeting, the two went for  coffee, and Tinsley confided that she and Scott had “officially” called it quits–again.  And it all went down after Bethenny’s dinner party.

Apparently Tinsley really had been listening to her friends that night when they said she deserved better because she went right home and called Scott and told him she needed “more” from him, but it must have been more than he was willing to give because by the time the conversation was over, so was their relationship.  Tinsley said it was all very fresh, and she was still sad, but mostly, she said, she felt “relieved.” Luann said she was relieved, as well.  For the record, so am I.  That relationship seemed like nothing but a big old headache, and Tinsley deserves better.

Most people spend the days following a breakup hiding under the covers and gorging themselves on ice cream, but Tinsley put them all to shame with her post-breakup activities.  She had a dress rehearsal for her turn as guest ringmaster of The Big Apple Circus.  She took Dorinda along, and the two gave the trapeze a try.  As a person with a fear of heights, I must say both were pretty impressive, but surprisingly, Dorinda was the more graceful of the two.

Later on, Sonja, Ramona, and Luann enjoyed a girls’ night on the town at T Bar, a downtown hot spot where everybody knew their names, especially Michael, a rather handsome and charming silver fox all three seemed to have a romantic history with.  And apparently it was a night for romantic blasts from the past because no sooner did Michael walk away than Ramona’s ex-husband, Mario took his place beside them at the bar.

They were all thrilled to see Mario, especially Ramona, who blushed and teared up as she hugged him.  Sonja and Luann left them alone, and they flirted and talked about relationships.  Mario said he felt that marriage should be a “renewable contract” that can be reinstated every 7 years, but when asked if a renewal was in their future, he simply laughed and shook his head.

During her confessional, Ramona said that as much as she enjoys flirting with him, and as attractive as she still finds him, she didn’t think a reconciliation was in the cards.  But it was hard to ignore that neither of the exes seemed committed to their no, and the fact that they still make each other blush after all they’ve been through, so who knows? Maybe these two will give it another go one of these days.  Besides, if Ramona can find someone who knows her as well as he does, and can still stand to be around her for more than five minutes, she’d better jump all over it, because they’re just not making any more of them.

A few days later, Dorinda planned a spa day for the ladies in a hotel suite she’d booked for the occasion, and she had a bone to pick with Ramona.  It seems Ramona had invited Dorinda to be her plus one at the annual Angel Ball, and then ditched her when the opportunity to sit with the cool kids at a “better” table presented itself.  Of course, Ramona tried to lie her way out of it when Dorinda confronted her, claiming that she had been assigned to that table, but both Page Six and the Bravo cameras disagreed.  The gossip column reported that Ramona had been “table hopping,” and had actually displaced another guest by taking their seat.  She could be heard on the Bravo film footage saying that she was actually assigned to the same table as Dorinda.

But none of this stopped Ramona, who went so far as to ‘swear on her daughter’s life.’  Someone really should check on Avery–she may not be okay.  Then Ramona, master of deflection, took a different tact: She accused Dorinda of causing a scene at the “better” table when she went over to tell Ramona how uncool it had been to ditch her.  Dorinda fully admitted that she’d said this, but that it certainly didn’t qualify as a “scene.”  She tried to steer the conversation back to Ramona, asking her to just own up to what she’d done and apologize.  She held up her finger as though she were chastising a small child, which let’s face it, she sort of was, and then Ramona pushed her away.  The light-hearted smile and reasonable voice Dorinda had managed to maintain throughout this exchange instantly vanished at that point.

The two continued their argument in the next room with Dorinda still trying to get Ramona to see reason–an exercise in futility if ever there was one–until Ramona finally stormed up the stairs.  During her confessional, Dorinda said she loved Ramona, but couldn’t stand “this side” of her (“This side?!” Is there some other side to Ramona that she’s been hiding for the last decade?) and that she’s been “very self-involved lately” (“Lately?!” Is she new?!).

During her own confessional, Ramona continued to refuse to take responsibility, and even went so far as to accuse the event planning staff of being the liars.  She suggested that perhaps they had told Dorinda that she and Ramona had been assigned to the same table to cover their own mistake, and avoid having egg on their faces.  Wow. Just–wow.

Dorinda was also unhappy with Sonja and Barbara, who both had other places to be, and were only able to stay at the spa day for a short time.  After all, Dorinda had gone to considerable effort to ensure a good time, but she was very gracious about it, and didn’t let on that she was disappointed.

Sonja was oblivious to Dorinda’s disappointment in her, but must have been feeling very protective of her friends because she pulled Barbara aside, and told her that she needed to make more of an effort with Dorinda, and confronted her about saying she didn’t like Ramona while they were all sitting around at Bethenny’s after her dinner party had ended and Ramona had left for the evening.  But really, who can blame her.  Ramona’s a lot to take, and Bethenny had asked Barbara how she felt about her, so it was more honesty than trash talk.  All the same, Sonja warned Barbara that her comments had gotten back to Ramona, and warned her to “take it down a notch.”

Barbara actually listened to Sonja, and pulled Dorinda aside for a quick talk.  She said she was sorry that they’d gotten off on the wrong foot, and the two agreed to a “reset.”

Dorinda must have been feeling mushy because she teared up, and the two former friends hugged it out.  She also made up with Ramona, and the two sealed it with a kiss on the mouth.

All seemed to be well in RHONY-ville–for about thirty seconds.  When Barbara tried to make up with Ramona, she got nothing but a snarky comment about her penchant for wrap dresses, and suggestions about “changing it up.”  Barbara took it in stride, and suggested Ramona take her shopping to help her find some new things, but Ramona had found the high road, and she certainly wasn’t going to give it up by being the bigger person.  She asked Barbara why she’d want to go shopping with her when she didn’t like her.  Barbara apologized for the comment, and asked if they could start over.  Ramona agreed, but when Barbara asked for a hug, she pumped the brakes, saying that was “too much,” so the women shared an awkward sort of shoulder bump instead.

While she had everyone’s attention, Tinsley announced her breakup with Scott to the rest of the ladies, leading Bethenny to feel fully vindicated.  She’d been right about Scott, and Bethenny loves to be right. She said that she could finally wear her “I Know Everything” badge again (ugh!)

Well, that’s a wrap folks.  These women are a real trip, but that’s what we love about them, right? Things only get crazier later on this season, and scenes for the second half of season 11 promise fights, backstabbing, drama, and lots of singing by The Countess.  Stay tuned!