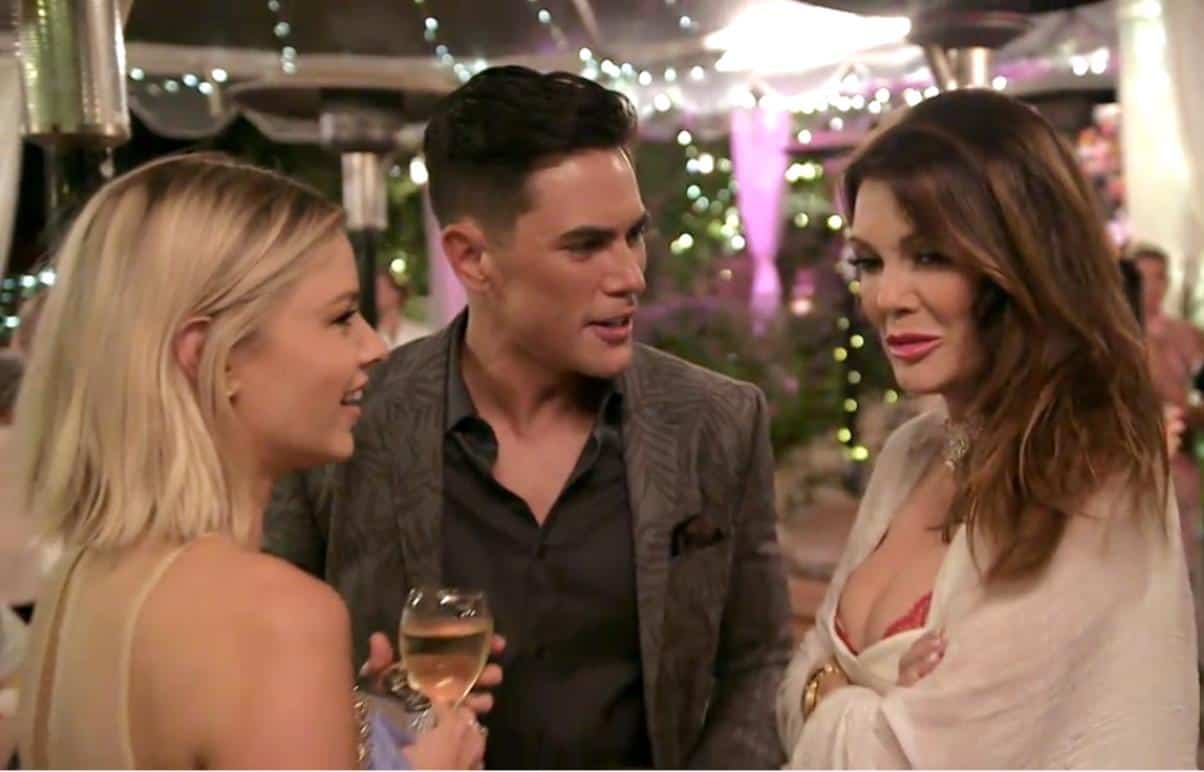 Season 7 of Vanderpump Rules is coming to an end and leave it to this crew to go out with a bang.

It’s the day of the engagement party aka- mini wedding. Brittany is over the moon and Jax is as beastly as ever. The THEME for the party is enchanted forest…only Brittany…a grown a*s woman who actually believes that fairy tales are real, would legit have that theme.

Everyone is super excited for the night and the crew contemplates ensembles while catching up. Kristen, LaLa, and Scheana are figuring out their wardrobe and LaLa refuses a cocktail when offered. “Oh, you’re still not drinking?” Remember when Scheana has NO clue of what sobriety actually means? (Ie: her ex-husband). Scheana whines about how mean Adam has been to her since going on a date with another dude (DUH) and she has even gone as far as adopting a penguin to win Adam back.

Meanwhile, Stassi reminds Beau that she is trying really hard to make their relationship stronger and better because she honestly cares for this guy. Speaking of caring, Ariana has grown a set as of late and decides tonight is the night she is going to confront LVP, ya know, her BOSS, about “publicly shaming” the Toms.

Man, how much is James struggling to stay relevant this season? When he realizes that he can’t get screen time with LVP anymore, he pays a visit to his therapist. With her, he dishes that he has been a “controlled” drinker and prefers a beer or two over being sober. James can’t quite handle being sober at this juncture in time and his therapist reminds him to stop worrying about what other people think of him.

This is seriously like a wedding. I mean, there’s a party bus WITH a stripper pole to get the guests to the engagement party. Leave it to Sandoval to actually utilize said stripper pole. Brittany is thrilled to see all of the guests dressed “on theme.” The bride-to-be, Brittany, is donning a skintight white dress and I can 100% see her belly button. But hey, it’s her day…she can do what she wants. On the bus ride there, Scheana spills some tea. When we find out that “Adam doesn’t go down on” Scheana, I can’t help but think he doesn’t sound like the type of guy who deserves his own penguin… 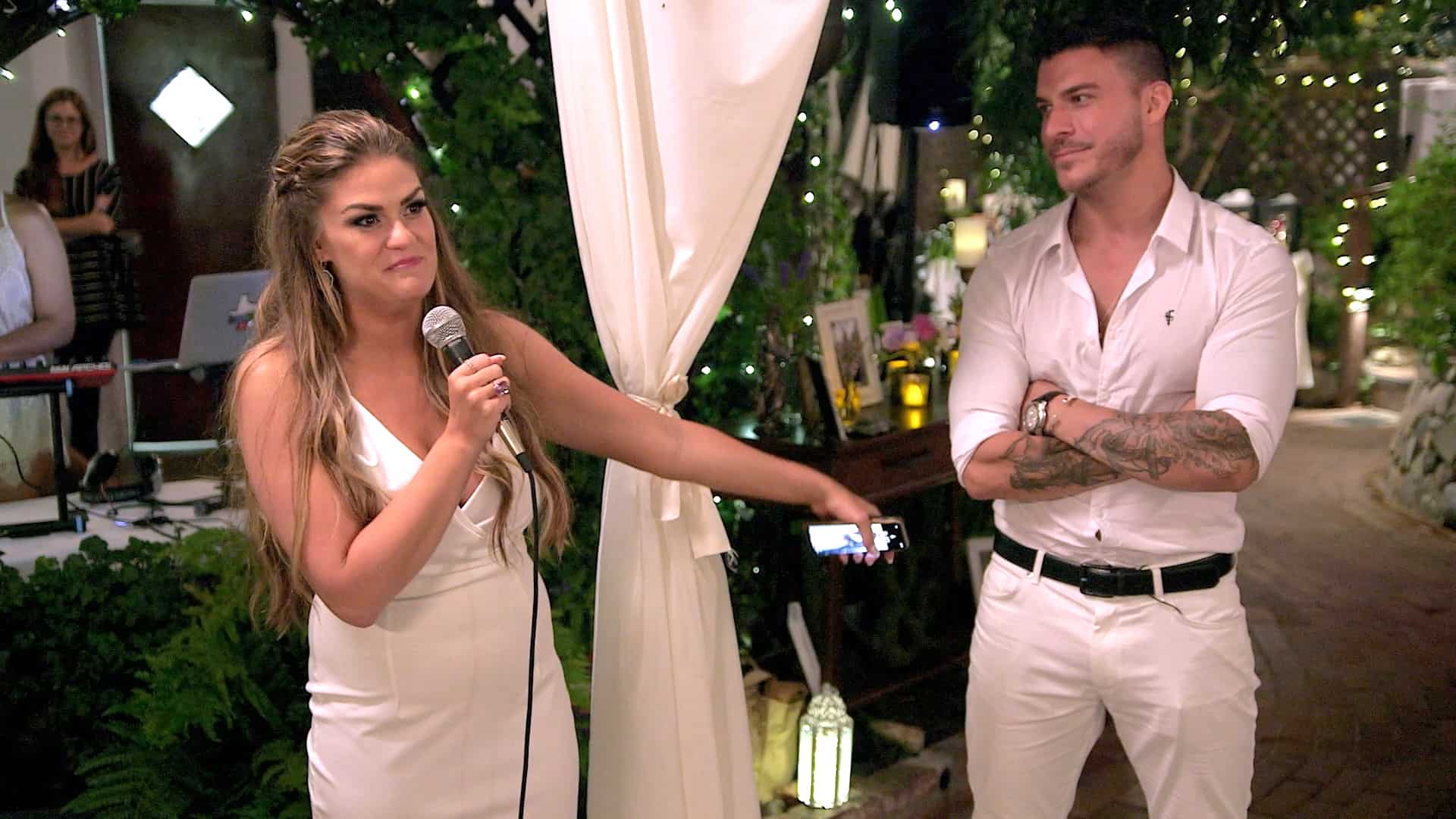 At the party, Brittany’s dad finds LVP and adorably tells her, “You were kind of the mom she didn’t have here and I was so concerned about her safety.” LVP tells Brittany’s dad that she truly has seen a difference in Jax and that Brittany is the best thing that has ever happened to that troll. Brittany makes her way over to LaLa and apologizes to her for not inviting her to be a part of her bridal party. I bet Brittany sure wishes she asked her to be a bridesmaid- I mean, if she gets invited on the private jet just for being LaLa’s friend, IMAGINE what she could have gotten if she gave her rose in a glass vase. Sigh…

I love how Schwartzie and Kristen are the two pep talkers for Adam and Scheana. Could we possibly get any TWO worse coaches? Somehow those two dopes managed to get Scheana and Adam to sit down and hash out the recent tension. “I don’t even know where to start.” Well Adam, lemme break it down for you. Scheana slept with another dude in hopes of making you jealous and clearly, it worked. When Adam tells Scheana that he doesn’t love her, she repeats the question over and over in case he decides to change his mind. She also tells Adam that she “thought of him the entire time” she was with the other guy. Um, gross. Adam becomes enraged and after eventually being physically “let go” by Scheana, he walks away from her, leaving Scheana, once again, alone. 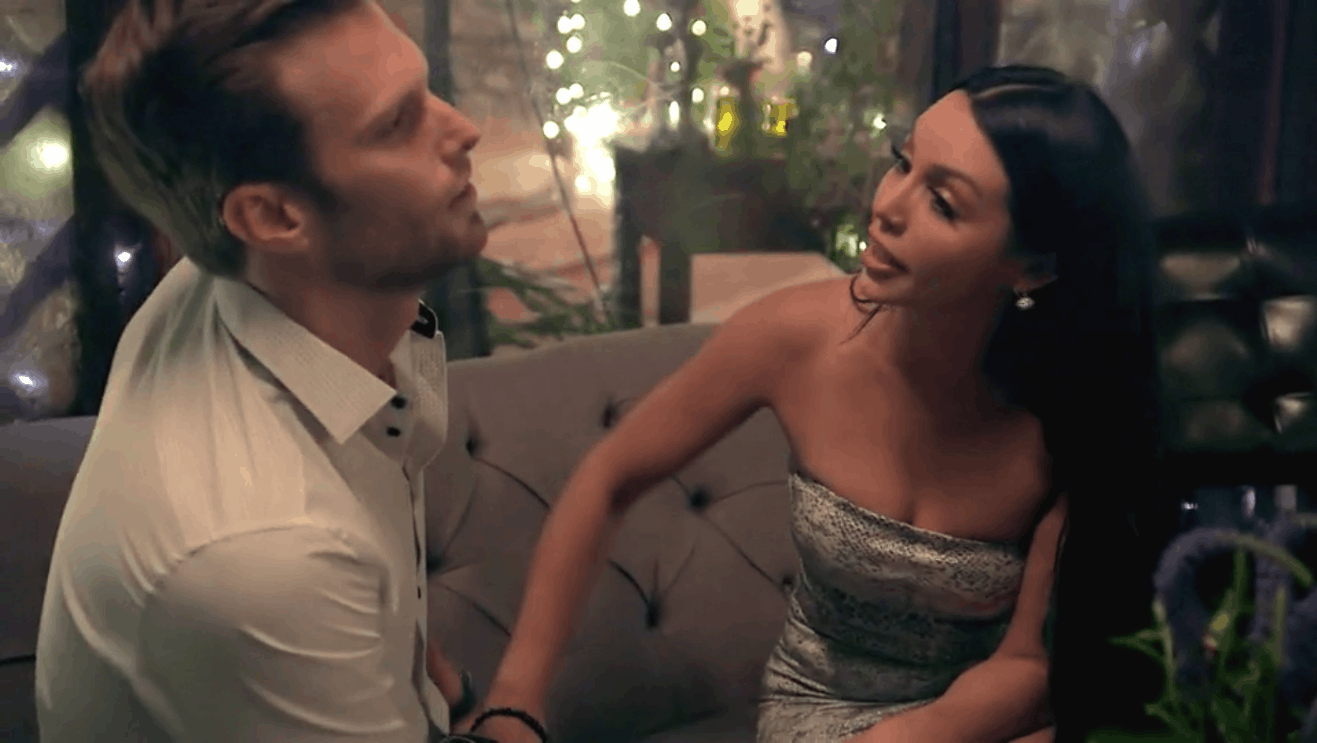 James and Raquel roll up to SUR for a romantic night to try and keep James’s mind off of the fact that he wasn’t invited to Jax and Brittany’s engagement party. He has high hopes that they might be invited to the wedding and Raquel kinda shrugs it off cuz she knows the deal. Raquel reminds James that she doesn’t want to hear any more cheating rumors and James kinda shrugs it off cuz he knows the deal. HA.

In the midst of the party, Scheana cries like a baby over Adam and Ariana go to bat for Sandoval to LVP. GULP. Ariana brings up how she is “bummed out” about LVP’s comments towards the Toms. Ariana’s issue with Lisa has to do with Lisa making a joke about the Toms going on the cast’s Mexican vacation and leaving her to do all the work, during an interview she did with her business partners. Ariana felt it was unfair since Lisa had encouraged the guys to go on the trip, as she also felt it diminished their hard work when it came to TomTom.

Obviously, LVP is a pro and makes it clear that it’s all out of fun and it’s simply #BritishHumor. She tells Ariana to “lighten up” and we almost see tears fall out of Ariana’s eyes. Almost. The “confrontation” ended on a good note with Lisa hugging Ariana.

Jax explains to his boys that he moved to LA and tried to fit in, but now figured it all out in his head, and he is happier than ever with Brittany. Naturally, Sandoval gets sappy and makes the guys swear they will always be friends and it’s a very bromancy moment for the Toms + Jax.

Beau gets called over to LVP and you can tell that he is sh*tting his pants. LVP simply wants to tell Beau that she approves of the relationship and that she is happy Beau wants to (for some reason) marry Stassi. Stassi meanders over and tells LVP how her own mother embarrassed her and made Stassi feel as though at any moment, she could mess up the entire relationship. LVP swears she is rooting for the couple.

When Stassi says her parents are both on marriage number four, Beau reminds her that they are not their parents. Stassi cries about her love for Beau and it’s borderline sickening. Speaking of sickening…OMG. Scheana crying on MeeMaw is too much for my brain to handle. Of course, she makes the night about her. How ‘bout someone give the girl a wipe to clear off some of those tear stains on her makeup filled face?!

To practice for their wedding, Brittany and Jax cut their cake and Brittany, well Brittany feeds herself. Guess she heeded Jax’s advice about taking care of number one first, huh? Stassi takes it upon herself to talk to Brittany’s dad about Jax- everyone’s favorite hobby and interest. Stassi promises her dad that if Jax messes up, she will kill him herself (or something like that) and even Jax’s own sister reminds Jax that, “You’re my brother. You f*ck up a lot, but I’m gonna be in your corner.” Aw. Family.

LVP gets the microphone and makes a touching speech about Jax growing up and warns him that if he messes with her “Kentucky muffin” (?!), she is coming for Jax. Brittany grabs the mic next to thank all of the guests and tells the world that she is beyond happy to be at this point in her life with Jax. The season wraps with everyone dancing and spinning and love just pulsating through the air. Before LVP leaves the party, we get to witness her hitting a pink, bedazzled LVP beer funnel, as per some pressuring from the Toms, ya know, her business partners. #dead. Watching her suck down the beer is hilarious and she will now forever be known as the beer bong queen. Talk about an exit…

TELL US – THOUGHTS ON THIS VANDERPUMP RULES EPISODE? WAS ARIANA RIGHT TO CONFRONT LISA? WAS SCHEANA ACTING DESPERATE OVER ADAM? WHAT DID YOU THINK OF HIS BEHAVIOR?