by Tiffany Brown May 16, 2019 37 comments
ShareTweetWhatsappPinterestRedditTumblrMailFlipboard 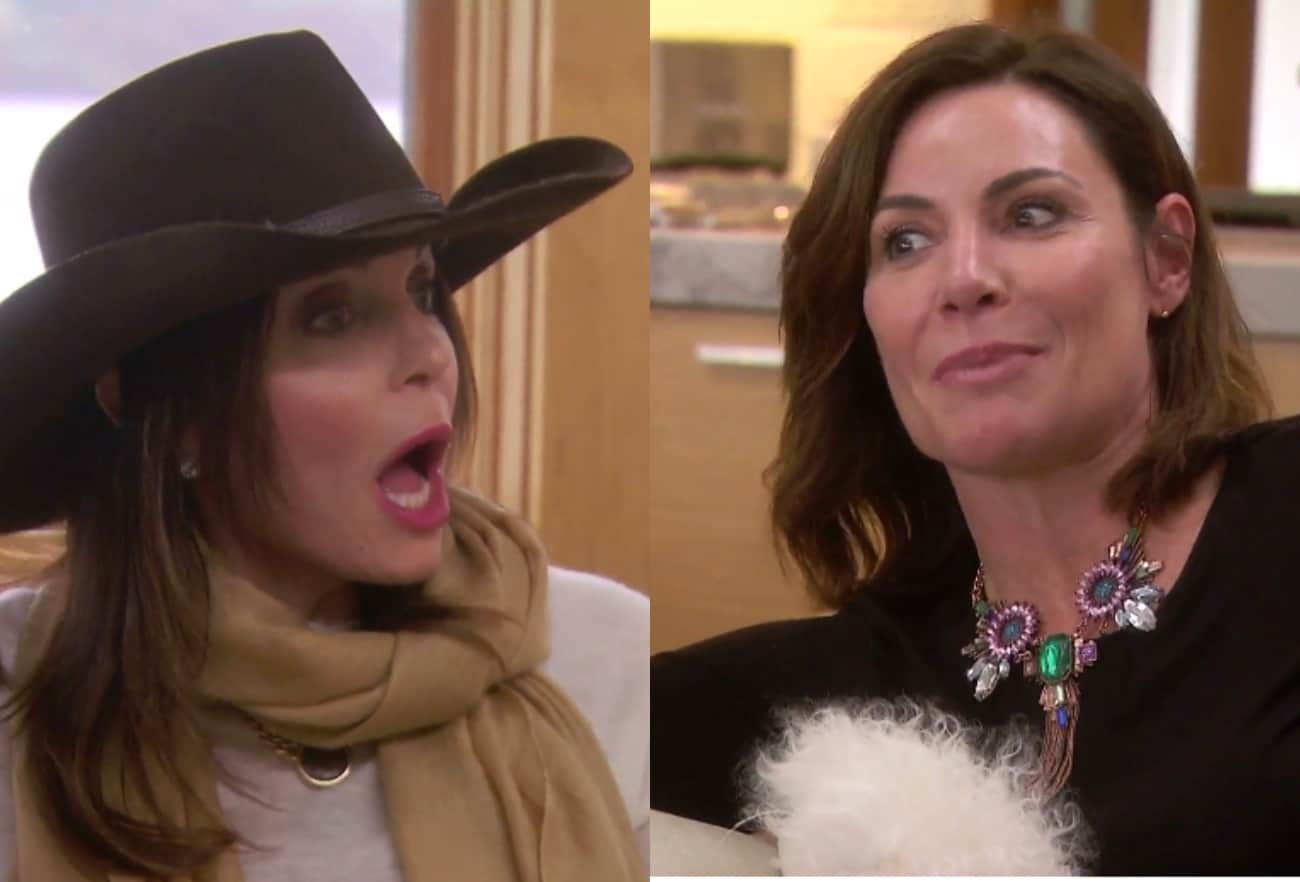 Well, another week, another trip, another fight.  That pretty much sums up the lives and times of the ladies of The Real Housewives of New York.

This week, they made their way upstate to visit Luann’s new house–and this trip went pretty much the way they always go.  Will these women ever learn, and just stay home?! Apparently not.  They’re addicted to the drama, and hey, so are we right?! So here goes:

First of all, can we please talk about Sonja?! She is an absolute mess–but I adore her! Watching her riding in a party shuttle–all alone, mind you–with just her fluffy, little dog, Marley by her side, as she made her way to Luann’s, talking to herself nonstop, as she groomed Marley, before taking the exact same brush, and raking it through her own hair, was well worth the price of admission.

Speaking of dogs, Tinsley had just received terrible news about hers.  He was diagnosed with cancer, and Tinsley was understandably devastated.  He’s her baby–maybe the only one she’ll ever have, she fears, which Sonja failed to understand when they discussed it during a girls’ night out with Ramona a few days to the trip.  Tinsley was talking about how desperately she wanted to get married and have children, and Sonja pointed out that, perhaps, that was just what Tinsley ‘thought’ she wanted.  She said that Tinsley didn’t need marriage and children to be happy.

When Ramona stepped in to say that Tinsley was probably the best judge of what Tinsley wanted, and that there was nothing wrong with wanting a family, Sonja accused her of being ‘just like’ Tinsley’s overbearing (and ubiquitous) mother, Dale, and filling Tinsley’s head with ideas of traditional family life being the only viable option.  She had a valid point, but her delivery sucked.

Ramona, on the other hand, had been working on her delivery, and her effort paid off when she met Tinsley and Bethenny for lunch.  She calmly told Bethenny that she really wished she’d skipped the Victoria’s Secret party, and attended her charity even last week.  Ramona said she was a little hurt that Bethenny hadn’t thought it was important enough to be there.  And here’s the thing–it didn’t turn into a fight! Bethenny said she was sorry she hadn’t been able to make it–and they just moved on. Like adults! What’s next?! Unicorns frolicking down Park Ave?!

But don’t go nominating them for sainthood just yet.  What they moved on to was trash talking their “friend” Luann behind her back. Not that I can blame them–she’s been a bit much this season. Actually, she’s a bit much every season. Or maybe she’s a bit much–period.  But I digress.  Suffice to say, they’re over her diva attitude, and Bethenny really needs for the countess to step off her throne, and start showing a little more appreciation for all she’s done for her over the last couple of years.

Talk soon turned to Tinsley, and her baby blues (the girl is positively obsessed).  Bethenny seconded Sonja’s sentiments–albeit more gently– about it being possible to have a full life that didn’t include a husband, but cautioned Tinsley about ticking biological clock.  She’s 43, after all, and following her recent break-up with Scott, she’s not ready to start dating again.  Bethenny reminded Tinsley that she didn’t necessarily need a man to have a child.  Love could wait, she said, but if a baby was the goal, time was of the essence.

The idea of having a baby on her own seemed to lift Tinsley’s spirits, particularly once Bethenny assured her that they’d find the best sperm money could buy, and that she could pick and choose the attributes she wanted  to have passed on to her child as easily as she could order a la carte menu items.  As for love, Bethenny advised, any man who was worth having, and who truly loved her, would surely love her child, as well.

Upstate, Sonja and Luann were enjoying their visit, and were soon joined by Barbara.  When they sat down to dinner, the two women told Luann that she was beginning to rub her friends the wrong way.   She was starting to believe her own hype, they warned, and she was treating her friends like they were her “fans.”  They explained that it hadn’t felt very good to be left waiting for hours for her to perform at her Halloween party—especially since she couldn’t even be bothered to come downstairs and say hello to them.  And even worse, Sonja said, she’d been awfully rude to talk about Bethenny behind her back simply because she’d had to leave to get home to her daughter.

Luann denied any wrongdoing, and said again that Brynn had surely been asleep, and not up missing her mother at that hour, and still couldn’t see why Bethenny couldn’t wait a measly ten minutes to see her perform.  Besides, she pointed out, Bethenny had said plenty of horrible things to, and about, her over the years, and should really get over herself.

But then Luann softened.  She said that she wasn’t angry with Bethenny–just a little hurt.  Of course, she appreciated all Bethenny had done for her during the bad times, but that was all the more reason she wanted her there with her to celebrate the good times.  This was a good “spin” on things, Sonja decided, and advised Luann to “Ramona-cise” the situation in exactly that way should the subject come up once Bethenny arrived.

Luann began to feel better–and definitely enjoyed the dig at Ramona, but she couldn’t help feeling a little ominous as Bethenny, and the others made their way upstate, as she’d surely be on the chopping block.  And she was right.   Bethenny, Dorinda, and Tinsley yucked it up at Luann’s expense as they made their way to her house.  They decided to make a game out of Luann’s constant references to her show.  Should they drink, take off a piece of clothing, or both each time she uttered the word cabaret, they joked? It didn’t sound good–or safe. Surely the quaint little hospital in the quaint little town in upstate NY was not prepared to pump the stomachs of three naked, middle-aged women.

Of course, Barbara and Sonja were more than ready to handle any mean girl behavior the ladies had in store.  The two women bonded over their shared past experiences of being bullied by the tough girls in high school, and Sonja said her signature move had been slamming the heads of her tormentors into the hand dryer in the girls’ room.  Sheesh! What would the Morgans think of such behavior!

As the other ladies descended on Chez Countess , they had plenty of snide remarks about the place, calling it an “isolated” “bungalow” that would surely ‘drive them to drink’ if they had to live there.  But of course, they slapped on fake smiles, and oohed and ahhed over how beautiful it all was to Luann’s face.  And the home really was fabulous. It was an enormous waterfront property with a spectacular view.  The only questionable design choice was the stove incongruously placed in one of the guest bedrooms.  What was up with that?!

There was clearly tension in the room, and things only got worse, as the ladies sat down for lunch, and talk turned to the last time Sonja and Tinsley had seen each other.  Sonja admitted that she’d been rude, and acknowledged that she’d hurt Tinsley’s feelings, but said that the evening was meant to be fun, and Tinsley should have “compartmentalized” her feelings because she really hadn’t been in the mood to hear the whole baby and boyfriend spiel–AGAIN. Well, tell us how you really feel, Sonja!

It was clearly time to change the subject.  Did you all know that Barbara is “sexually fluid?” Well, you do now! Apropos of absolutely nothing, she told the ladies that she’d had a serious relationship with a woman, but also loves men, which is why she didn’t marry her.  There–you’re welcome.

With that little tidbit of information dispensed with, it was time to address the elephant in the room (sigh–here we go).  Bethenny said she’d heard that Luann was upset that she’d left the Halloween party before her performance, and explained that she’d stayed for three hours, and it had been getting late, and that while it was true that Brynn was asleep at that hour, it was also true that she was home with a sitter, and that Bethenny needed to relieve her, and then get Brynn up for school the next day–issues Luann wouldn’t understand, as she had suggested that Bethenny essentially hire someone to raise her kid for her.

Luann told her not to talk to her like she wasn’t a mother too, because she was, and added that she had only wanted Bethenny there to celebrate her triumphs with her.  Bethenny said she’d spent plenty of time on her over the last year, and that now she was dealing with the issues in her own life.  She’d “done Luann,” she said, and was kind of over it.  She’d been through a lot over the last year, and was just trying to handle it, and who did Luann think she was to judge her for the way she went about it, Bethenny wanted to know?

The show came to a close at that point, but this is far from over.  The ladies’ trip upstate continues next week with more arguing, more baby talk, and a night out to see a show headlined by an octogenarian, who looks suspiciously like an aged Luann–tiara and all.  Stay tuned!