Home Featured Posts The Real Housewives of New York Recap: Dorinda and Sonja Interrupt Ramona’s Speech in One of the Most Cringeworthy Moments in Housewives History

The Real Housewives of New York Recap: Dorinda and Sonja Interrupt Ramona’s Speech in One of the Most Cringeworthy Moments in Housewives History

by Tiffany Brown May 9, 2019 100 comments
ShareTweetWhatsappPinterestRedditTumblrMailFlipboard 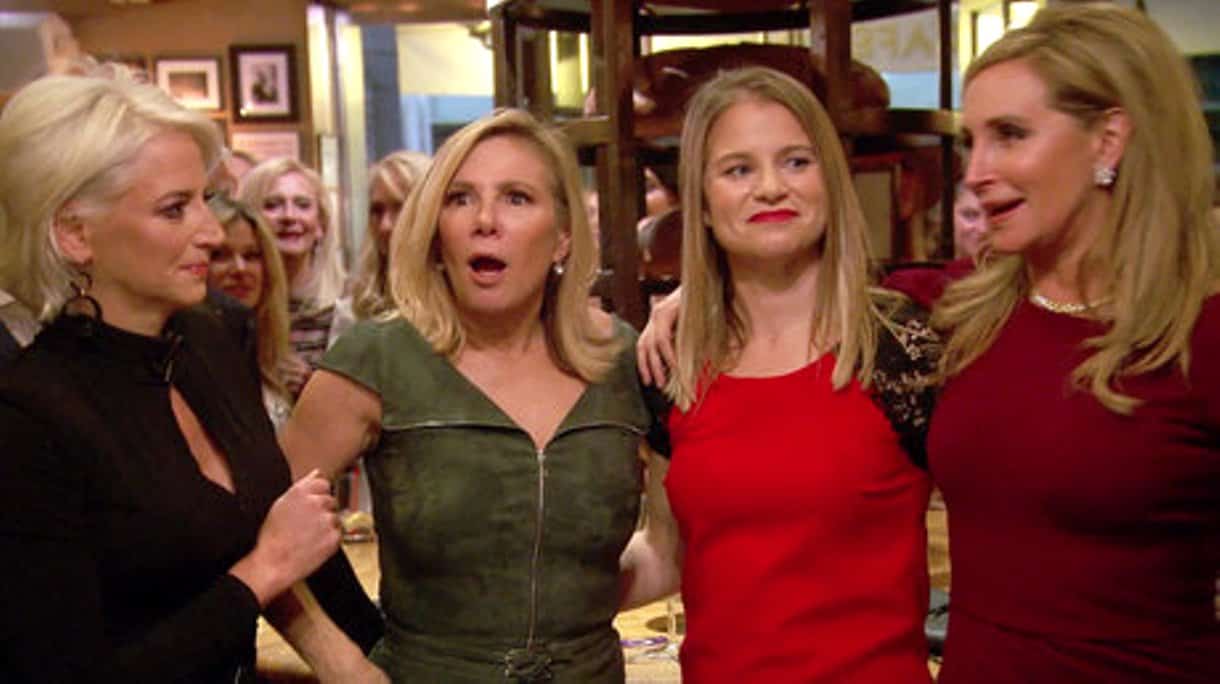 Tensions were running high for the ladies of The Real Housewives of New York during last night’s episode.  Don’t get me wrong, I don’t blame them for being annoyed with one another (it would be difficult not to be) but I just wonder why they continue being friends when they’re all so put off by each other?

When we picked up with the ladies, everyone was getting ready for the big Halloween bash that Luann was hosting.   Everyone went all out with their costumes, and were excited to see Luann perform.  Most of the ladies went with sexy nurse costumes, but Bethenny and Barbara chose to switch it up a bit.  Bethenny chose an angel costume, which looked great on her, but after seeing pictures online of the Kardashian sisters, all five of whom were also dressed as angels for Halloween, she began to regret her decision–and to dread the inevitable “who wore it better” comparisons in all the tabloids the following day.

I must say my favorite costume was Barbara’s.  She came dressed as Slash from Guns N’ Roses, and for once, her penchant for 90’s hair and makeup served her well.  She looked great! She still had on a midriff top, though.

As the ladies talked and drank, and the party wore on, Bethenny became increasingly annoyed by the fact that Luann, who had promised to go on stage by 11, so her friends wouldn’t have to stay out too late, had still yet to make an appearance, or even come down to say hello to her friends–so she left. It may have been a little rude, but Bethenny had a kid at home, and besides, how many times does she really need to cheer Luann on as she sings “Money Can’t Buy You Class”?! I wish money could buy her a new song!

After Luann finally performed her two songs, and realized Bethenny had bailed, she wasn’t happy.  When Dorinda told her that Bethenny had left because Brynn was at home, Luann wasn’t buying the excuse.  She said that Brynn was a young child, and was surely asleep at that late hour.  She’s probably not wrong about that, but, come one! Just take the excuse and relax, Countess! Bethenny showed up, did her duty as your friend, and had every intention of staying to watch your cheesy performance, but you were late, and damn it, she just wanted to go home.

Tinsley also called it an early night, although she at least stayed through the cheesy performance.  But she was clearly not in the most festive of moods, and was likely still exhausted from the meltdown she’d had after the Big Apple Circus.  The morning after the party, she told her mother, Dale (who, for some reason was still there–or there again. Who knows?) that she was still reeling from her breakup with Scott, and that while she’d tried to be strong, and actually feel the relief she kept telling everyone she felt, it was taking a toll on her.

Both women cried as Tinsley talked about the fact that she still didn’t have the children she so desperately wanted.  But Tinsley quickly pulled herself together, and vowed to let go of Scott and the past, and get back to being her, after so many years of making Scott the center of her world.

A little later on, the other blondes of RHONY, Dorinda, Ramona, and Sonja, met for lunch, where Ramona introduced them to a young friend of hers, Bridie, who was a sexual assault survivor.  Since her assault, Bridie has bravely used her voice to advocate for other young people, and had asked Ramona to lend her name and voice to the cause.  Ramona was happy to do it, and asked Dorinda and Sonja to help too.

It was a great cause, and, of course, Dorinda and Sonja wanted to do all they could, but perhaps they all should have just written out a check, or taped a PSA or something because they spent the entire lunch bickering, and talking over each other.  It was nothing major, and it’s just their way of dealing with each other, but in serious moments, no one wants to hear it, and it was clear that poor Bridie was wishing she’d picked someone else–or at least picked someone who didn’t constantly call her “Birdie.”

But Dorinda may have just been tense.  She was in the process of moving, and everyone hates moving.  In addition to all the unpacking, she had her boyfriend, John, and his not-s0-subtle hints about wanting to move in with her, to contend with.  Dorinda made it clear that she had no interest in domesticity, but he continued to push the issue until finally, she said she was going to make this new home ‘her own.’

Dorinda took another break from the big move and met Sonja, Tinsley, and Bethenny for drinks and a big seafood tower (Bethenny’s “severe allergies” be damned) and talk soon turned to Luann.   Bethenny mentioned that she’d received a text from Luann that said something along the lines of  ‘sorry I missed you last night. Heard your costume was over-the-top.’  Not so bad, right? But Bethenny has known Luann for years, and the term “over-the-top” was bugging her. She wasn’t quite sure if she meant it in a good way, or if it was one of Luann’s trademark digs ‘wrapped in a bow.’

The other ladies agreed that the latter was more likely, and went on to discuss Luann in detail, particularly Dorinda, who shared with Bethenny the comments Luann made about not believing she needed to get home to her daughter, and saying ‘what’s she going to do, watch her sleep?’  She went on to say that Luann ‘lives in the moment,’ and therefore her history with her friends makes no difference, adding that she’s “unobtainable” as a friend these days.

Bethenny agreed with Dorinda.  She said Luann was going back to her old ways, and she believed her to have “delusions of grandeur,” an assessment Sonja agreed with wholeheartedly, adding that it didn’t help that Luann was surrounded by “groupies” these days.

Bethenny began counting out all of Luann’s transgressions on her fingers.  There were her comments she’d made behind Bethenny’s back about her being the “Queen Bee” when Dorinda offered to save her the best bedroom in the Berkshires, there was the comment about “watching her daughter sleep,” and finally that shady “over-the top” comment. That was three (everyone catching on that two of those nuggets were supplied by Dorinda?), and Bethenny said her temperature was rising.  If they got to five, she warned, she was going to go “old school.” Nevertheless, she assured them all that she wouldn’t miss Luann “next intervention” for the world. Ouch! Talk about digs–and she didn’t even bother with the bow! This was about to get ugly–fast.  Anyone want to place a bet on how long it will take Dorinda to go running back to Luann to tell her all the things Bethenny had said?

When the ladies met again at the charity event, everyone was annoyed with Ramona, and her social climbing and constant flirting with any man who will look her way–no matter how smarmy he may be.  Luann reminded them all that they were invited to her home in upstate NY the following weekend, and Ramona was quick to remind her that it was her birthday. She was going to lunch with other friends, she said, and they weren’t invited, but she said they were free to celebrate her.  Who is this woman?!

When it came time to get down to business, and talk to the guests about the reason they had all come there–to discuss sexual assault— Dorinda kept talking over Ramona, who told her several times to stop.  Then Sonja got in on the act, telling Ramona not to interrupt Dorinda, and adding her own two cents.  It was a mess, and Birdie–I mean Bridie, finally took over and thanked everyone for coming and helping to shine a light on the cause.  It was a mess, but no one who knows these women should be the least bit surprised.

Below is a clip of arguably one of the most cringeworthy moments in Real Housewives history. You’re welcome!

This is actually beyond anything I’ve ever seen. You will watch with one eye open. https://t.co/e2F2O0iyWR

Next week the big city ladies head out to the ‘burbs for a weekend at Luann’s, and the showdown between the Countess and the Queen B is not to be missed. Stay tuned!