by Julia May 29, 2019 328 comments
ShareTweetWhatsappPinterestRedditTumblrMailFlipboard 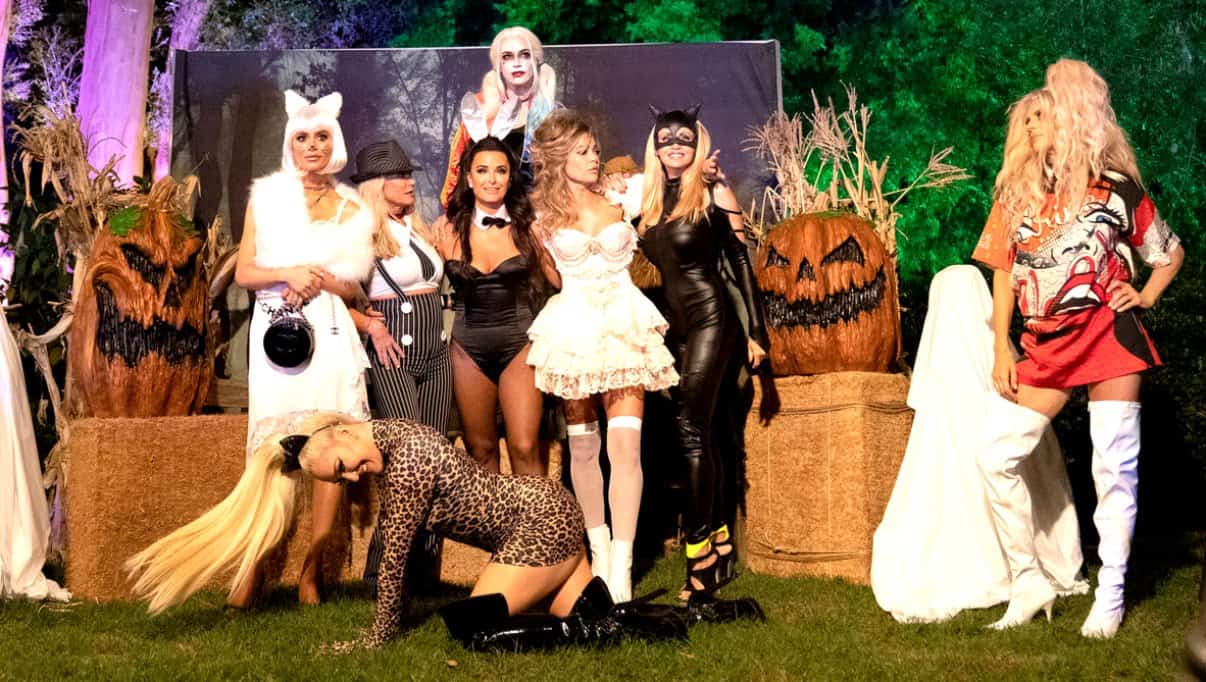 Say it loud and say it proud: BRING BACK LVP. The Real Housewives of Beverly Hills is struggling without her, but they do a great job of shaking things up amongst themselves on this episode.

Still in Hawaii…the day after  Camille’s wedding…anddd Kyle’s making it all about her, again. She’s losing her voice and simply cannot afford to be sick, as her eldest daughter, Farrah is turning 30 and there’s a big bash to celebrate this milestone. Camille, the bride, greets some of the gang (sans her groom because he’s golfing??) for breakfast and Kyle spills the tea about LVP’s lie detector test to Camille. As if she wants to hear about this the day after her wedding… Actually, knowing Camille, she is thirsty for this gossip, especially since LVP didn’t even wish Camille well on her wedding day.  Camille is disgusted by LVP’s behavior…at least that’s how she behaves in front of the other women.

Denise returns home to Aaron after filming her blockbuster movie ????. Aaron is ticked off because he opens a present from Rinna and HarryHamlin and the card is signed: “here’s to many happy endings.” LOL. Way to let national television know about your private lives, Denise. You deserve it.

The girls are on their way to the airport to head home. In the shuttle, Rinna spies a new, juicy article. “In between the brunch and going to the airport, an article came out in People Magazine” where Camille is essentially kissing LVP’s a*s about what a supportive friend she is. Yet, earlier that morning, Camille was talking mad smack about LVP. Leaves you scratching your head about Camille’s intentions.

Rinna is overly angry and annoyed that she can longer take Camille’s word and states, “I don’t trust anyone who talks out of both sides of her mouth.” Rinna, how bout you take your own advice? She takes this moment to let Dorit know that Camille has been talking sh*t about her. Leave it to Rinna- when she sees a pot, she stirs it. Dorit is appalled and is hurt that yet another housewife finds her painfully annoying. When is she gonna take a hint?

Back in Beverly Hills, Kyle’s inviting all the girls to the Farrahween, 500 person party, for her daughter. Naturally, Erika’s 90-year-old hubby, Tom, calls the party “cool,” but bows out. Before the party planning gets into full swing, Rinna and Kyle make a quick trip to the doctor. Nothing quite like going for a mammogram with a friend, amiright? On the way there, Kyle shares that, “This party cost about 15 Birkin bags.” Kyle was only 19 when she had Farrah, so she feels a bit nostalgic and willing to spend 1.5 million dollars or so on the event.

Over at the doctor’s office, Kyle and Rinna head in for their mammograms. This test gives Kyle anxiety (what else is new??), but I can understand where the anxiety stems from. Both her AND Rinna have had cancer in their family, thus causing some nervousness. Kyle has to have a few more images done. She is freaking out since her mother found out she had cancer on Kyle’s 30th birthday and today is Kyle’s daughter’s 30th birthday. What are the odds? After what feels like 5 intense hours, Kyle’s results are back and she is clear. Bring on Farrahween!

I’ll never get over Dorit and PK’s Halloween costume. PK as Karl Lagerfeld and Dorit as his cat. I mean, the wig cost PK $800.00, so it better be good. At Kyle’s house, Sophia is flown back from college and Kyle is prepping for her Playboy Bunny costume. Kyle’s bunny outfit was $615.00. The bunny tail was $45.00. I cannot. The problem is that the costume doesn’t quite fit Kyle, as it “broke” whilst on her bod, therefore her hubby Mauricio had to send for an Uber to get the next size. Rich people problems, huh?

Kyle’s house is decked, as are the guests. Everyone’s gone all out with their costumes, except for Aaron. He sort of looks like a supermarket romance novel cover. You know the ones.   The award for the best Halloween costume goes to Rinna. She is dressed as Erika Jayne and has gone ALL OUT. Even right down to the blue contacts. Impressive.

Speaking of impressive, Kyle’s second costume arrives just in the nick of time. Her teenage daughters and youngest child, Portia, are grossed out by their mother’s costume choice, and rightly so. Kyle retorts, “These are my pants, Portia. It’s Halloween. Cut me some slack, Jack.”

Kim Richards is attending the event, cuz ya know, she’s the birthday girl’s aunt, but that’s not good enough for Rinna, who feels she needed a heads up about Kim’s presence. Rinna, I mean Erika Jayne, is triggered. On a different note, Why is Camille at this party? Didn’t she just get married? Shouldn’t she be on a honeymoon with her husband? Speaking of her husband, does he even exist? Why are they never together?

Dorit is not happy about Camille being around her. She desperately wants to confront Camille about what Rinna told her, but instead opts for hilarious jabs. Upon noticing that Camille is dressed as a cat, like Dorit and Erika, Dorit states, “And Camille, she’s like the stray cat.” Dorit then spits out, “Where do you buy a mask that can cover both faces?” in regards to Camille’s costume. Dorit is on fire with the one-liners. Kyle begs Dorit not to say anything to Camille this evening, but time will tell.

Kyle takes the stage and makes a speech about Farrah. No one’s 30th birthday can top this one…I mean there’s a “Farrah’s Wheel” in Kyle’s backyard. As the gang poses to take a picture, drama erupts. In character as Erika Jayne, Rinna takes it next level with Kim. Rinna blames “Erika” on her outburst about the bunny (remember a few seasons ago when Rinna gave Kim a bunny for her grandson and then Kim gave the bunny BACK to Rinna at the reunion? Yea, I don’t either, but leave it to Rinna to remind everyone). Denise plays the confused, defensive guard for Rinna, as she is one of Rinna’s besties. Denise inserts herself into the fight and Kim is p*ssed. “It’s between Lisa and I,” yet there Kim is talking about it with every single woman at the party.

Rinna is taking this Erika Jayne persona a bit too far. Denise and Dorit let Rinna know that Kim is still going on about the bunny debacle and the next thing you know, Kim enters the ring. Rinna and Kim have a sit down alone. No comments from the peanut gallery. Just woman to woman. Rinna admits that she was “over the top and in character tonight,” but doesn’t apologize. Kim tells Rinna that she has to be nice and the women go back and forth. Kim feels that the “bunny represented lots of mean things said, lots of damage done” and Rinna and Kim decide to move on and “try to make it for awhile.” To be honest, without LVP, there just isn’t the pizazz the show needs to go on, so Bravo is digging through the archives to find some drama of the past….