The Real Housewives of Beverly Hills Recap: Brandi’s Back and Lisa Vanderpump Remains Her Target! 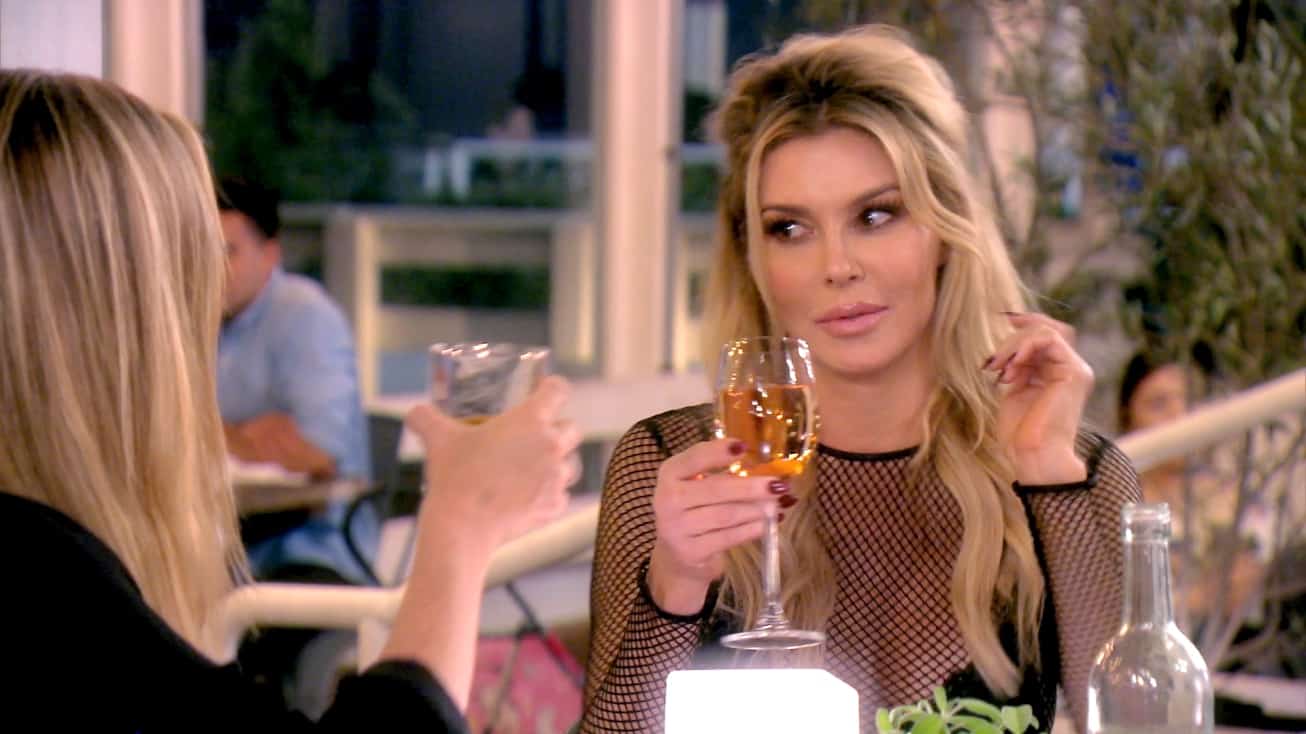 This episode of the Real Housewives of Beverly Hills opens with Kyle, Rinna , and Teddi in a car together. They are hearing from Camille and Denise– the two women affected by the wildfires that are ravaging Malibu. And then we flashback to five days earlier…

LVP is not present ONE time in this episode.  ::Sigh:: Consider yourselves warned…

Dorit is choosing models for her e-com shoot, Kyle is wearing McDonald’s headgear whilst begging her youngest child to deny her HW responsibilities, Teddi trots around with her daughter on horses, and Erika meets up with her new best friend, Rinna. Erika congratulates Rinna on her magazine shoot (a magazine no one has ever heard of, obviously) and the ladies discuss Farrahween. Erika claims that she loves how Rinna dressed up in an Erika Jayne costume since, in Erika’s eyes, that means she’s “made it.” What “it” is still debatable, but alas, I digress.

Rinna explains that “Kim and I talked- we worked it out. The end.” Let’s get that in writing. Rinna may have squashed an issue with Kim, but she is reminding Erika that Camille is on her sh*t list. Evidently, Rinna has had it with Camille and her two faces, as Camille kissed LVP’s booty in a People magazine article. “This situation with the magazine is like talking behind our backs.” It’s clear that Camille (whether she knows it or not) has “beef” with the majority of the girls and it’s bound to bite her in the a*s sooner than later.

According to founding father, Dorit, “The Beverly Beach girl: she’s strong. She’s confident.” These are Dorit’s words of wisdom to her models as she shoots her athletic wear for Kitson. PK visits the set with their two children and Dorit’s son even struts his stuff in his ugly patterned board shorts. It’s a filler scene, really, trying to promote Dorit’s lame company. The only good part about this segment is the male model and his abs.

Kyle unsuccessfully tries to control her cacophony of dogs (she certainly is no LVP) while making a very important phone call. Kyle believes that all of the trips the ladies have been going on have been “really fun,” so it seems like the perfect opportunity to plan a trip to this “gorgeous chateau in Provence.” Did Kyle forget how stressful the Bahamas trip was? She calls each one of the ladies, minus LVP, to invite them for the wine tasting experience. They all pretend like they have to ask their significant others and promise to get back to Kyle.

Let’s discuss how HarryHamlin couldn’t remember which of his daughters is the vegetarian. Dad of the year! The guy is finally back from his Canadian camping trip and it appears as though he has lost the majority of what little brain cells he once had. Rinna’s daughter Amelia is still battling her eating disorder, despite the lovely spread HarryHamlin put out. “I’m just not hungry. I’m allergic to everything.” Amelia flips the bird at HarryHamlin when he says he’s going to have some dessert and Rinna does an excellent job of NOT managing the situation. I love when HarryHamlin tells Rinna she’s the one responsible for their bratty kids’ behavior.

Rinna, Kyle, Denise, Dorit, and Teddi (who looks like she is still wearing her Halloween costume boots) meet up for some girl time. Dorit is like a wound up toy who doesn’t shut the hell up- she brags ALMOST as much as Rinna does once you get her started on QVC. She’s the first to say she is in on the upcoming girls’ trip and the others chime in with excitement. Erika joins the girl’s late cuz ya know #entrance. Kyle talks about closing her store after 7 years and naturally, Rinna can “relate” to this cuz she, too, once owned a store. What hasn’t this chick done unsuccessfully?

Denise can hardly believe the chateau situation, as she is used to frolicking around in her Uggs and talking about hookers. Kyle asks the $64,000 question: “So what are we wearing?” and Erika claims there’s no need for glam, as she looks “good enough.” No one is quite sure if Camille will be attending the upcoming trip and Rinna won’t let this potential drama die. Dorit can’t get over the talking behind the back and the rest of the women question Camille’s motives.

Camille talks about her wedding with her friend, cuz her husband is obviously not present. Perhaps he is camping with HarryHamlin? Camille found out that Teddi “snubbed” Camille’s daughter, Mason, at the airport on the way home from the wedding. Camille is getting rubbed the wrong way by Teddi and feels like she is getting “too big for her britches.” Camille is unsure whether she should bring up her feelings to Teddi, as it would cause quite a scene. Kyle did invite her on the trip…cuz what’s a trip without some drama?

Speaking of drama, how bout Bravo bringing Brandi back? I’m unclear who this cameo is benefitting the most: Denise’s boring storyline, Brandi’s fame, or Bravo’s ratings. It turns out that Denise was introduced to Brandi through a mutual friend. The ladies hit it off because they both have been through public divorces and they both love talking about hookers. Go figure. Brandi attempts to clear her name in the press, which in turns reminds Denise of the whole LVP drama.

Brandi believes that LVP is not innocent in this scandal because she knows how LVP rolls. According to Brandi, “Lisa Vanderpump and I were best friends for five years. Let’s be clear.” Funny, I don’t remember this sisterly relationship, but Brandi explains that the minute you cross LVP, you get punished by her. Denise sorta-kinda invites Brandi on the Provence trip- wonder what the other ladies will think of that??- and all I can think of is these maniacs in a Chateau in France together.

The next day, Denise drives over to see her hubby, Aaron’s, new space. Aaron has been holding down the fort at home while Denise was busy filming. Denise tries to delicately bring up the France trip with Aaron, but hey, as long as she gets him a happy ending, there should be no issue.

Erika and Kyle decide to shop for Provence because they very clearly do not have enough clothing as it is. Kyle explains that since closing her store, “This has been a very challenging time for me.” Kyle is pretending to not focus on what has happened recently with her business and LVP, but it’s nothing a little retail therapy can’t cure. Whilst perusing some scarves, Camille phones to let Kyle know she is coming on the trip. Can we trade her for LVP? PLEASE?!

The day before the trip, Teddi packs for her first ever “fancy wine tasting” and Kyle feels “frazzled” as she decides what to bring. What else is new? The next day brings breaking news and puts outfit choices in perspective. At least it should… 3 wildfires have broken out in the city of Malibu.

Remember that car ride from the start of the episode? Rinna, Kyle, and Teddi were heading to the airport for France when they hear from the Malibu-ites. Camille calls Kyle and tells her that she has to evacuate, as the fire is spreading rapidly and her home may be lost to the flames. There goes Rinna’s plans to make some drama. Mother nature beat her to it. Denise is also in a dangerous situation. She thinks her “house may be burning down!” My heart actually goes out to these women, as no one, not even a two-faced newly married, hyphenated last name snake, deserves this…