The Real Housewives of New York City Recap: Bethenny Calls Out an “Insufferable” Luann, Shares New Details About Her Rock-Bottom 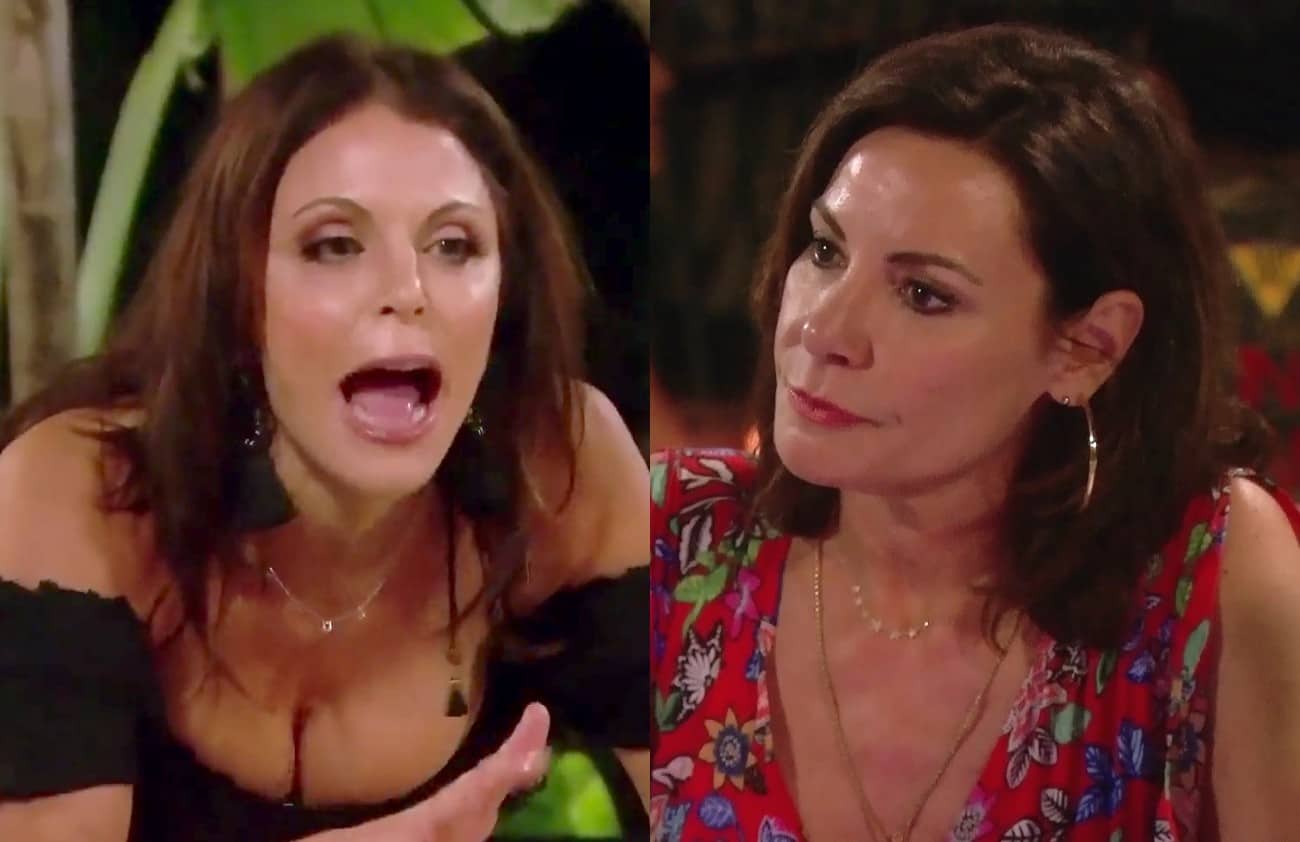 I think it’s time for the ladies of The Real Housewives of New York to head back to the big city.  Their Miami vacation has been a mess from the moment they stepped off the plane. On last night’s episode, things went from bad to worse, and it’s anybody’s guess where the relationships will stand from here on out.  Needless to say, it was a lot. So, let’s jump right in, shall we?

Following her drunken fall on their first night in town, and the subsequent call to the paramedics, Sonja decided to accept Luann’s offer to join her at an AA meeting.  Bethenny and Ramona also encouraged her to go to the meeting, and Sonja felt that if they thought it was the “proactive” thing to do, she was down for it.  However, she had some reservations.  For starters, she didn’t feel as though she really needed help with her drinking. More than that, she just didn’t want to go with Luann, whom she said was “bossy” and acted as though she was “the first alcoholic to walk the Earth.”  She’s not wrong.

Luann’s ‘bossiness’ started before they even left the house. There, she began lecturing Sonja about her over-the-top outfit, which The Countess felt was more appropriate for a singles mixer at a club med than an AA meeting.  She suggested Sonja tone it down and borrow a t-shirt, which Sonja grudgingly did. Of course, this didn’t stop Luann from wearing what amounted to a bathing suit cover up with a “slit up to her hoo-ha.”

When the ladies finally arrived at the meeting, Sonja felt ‘out of her element.’ But Luann was right at home, treating the meeting ‘like a cabaret,’ greeting and charming the fellow attendees and being all countess-y in general.  Sonja was also taken aback by some of the horror stories she heard from the others.  She felt triggered by the things she heard, and she left feeling more out of sorts than she had before.

Back at the beach house, Barbara was feeling out of place as well.  She tried to explain to the ladies that she felt that no one really seemed to be interested in her, and that it hurt her that they never seemed to ask about her.  The conversation began just before Sonja and Luann left for the meeting. Barbara was clearly looking to Luann for back up, but it never came.  In fact, when Bethenny called her a “Debbie Downer” who didn’t try to bond with the group, and Ramona accused her of bringing “negative energy” into the mix, Luann seemed to agree, saying “energy is everything,”  before sashaying off with Sonja.  She said she was beginning to feel like a little girl whose parents had dropped her off at summer camp, and she drove off, leaving her to fend for herself with the “mean girls.”

After seeing Luann brush Barbara off, Bethenny began to sympathize with her. She encouraged her to try to be a bigger part of their group.  She also advised her not to look for Luann to be there for her, as she is being more of a diva than usual, and is only out for herself these days.  Barbara had to agree, and she said she was beginning to “see the light” where Luann was concerned.  But her awareness of Luann’s shortcomings as a friend didn’t make them any less hurtful, and she cried as she contemplated simply heading home early. Bethenny hugged her and told her that they really did like her and want her around.

Later, when the ladies met back up with Sonja and Luann for lunch, Sonja was still shaken by the meeting. She couldn’t quite manage to get herself together.  She complained about the cabana and said everything was getting wet.  Then, apropos of absolutely nothing, she started talking about her daughter and how alone she felt because her father was getting older and ‘wouldn’t be around much longer.’   When the waterworks began, the ladies decided it might just be best to take their food to go and head back to the house.  But Luann, still thinking only of herself, decided she needed some alone time.  She headed to the beach, where she swam and sunned herself. Then, she went to the Fillmore Theater to pose in front of a giant promotional poster of herself that advertised her upcoming cabaret act.  Who says she’s a narcissist?

Luann was gone for hours, and the ladies were more annoyed than ever.  How dare she not check on Sonja?! After all, Luann knew that she had been traumatized by the meeting, and apparently couldn’t have cared less.  As they all sat around complaining about her, they began to bond with Barbara.  And why not? Nothing brings a group of girlfriends together quite like talking trash about another friend behind her back!

Things only went from bad to worse when the ladies headed out to dinner.  Something about gathering for a meal, particularly when they’re out of town, brings out the worst in these women.  Luann and Ramona arrived a little later, as Luann had been late coming home from her solitary excursion. She needed time to freshen up, and Ramona stayed behind with her so she didn’t have to catch a ride on her own.  But from the moment they arrived, the ladies pounced on Luann.

But really, who could blame them? She was asking for it.  She came flitting in, walking at least 20 paces ahead of Ramona, who’d been nice enough to wait for her. Immediately, she began complaining about how long it had taken to get her hair done. She also talked about how “rushed” her massage had been since she’d been last on the list to get one.  Blah, blah, blah! She went on and on, seemingly unaware that the other ladies were ready to vomit.

Finally, Barbara asked where she’d been all day, and she said she’d gone to the beach and to look at her poster.  Barbara said she really wished she had been around and felt let down.  She said she’d needed her earlier and really could have just used a hug.  Luann dramatically got up from the table and walked over to hug her, but Bethenny said she was just doing it to ‘cut Barbara off at the pass,’ and avoid having an uncomfortable conversation.  Luann denied this, of course, but Bethenny knows her too well.

Barbara went on to say that she legit gave up her life to help Luann through her problems last year. She felt she wasn’t getting the same support in return.  She added that she felt protective of Luann, which Luann said was not her fault.  Tinsley then spoke up to say that it was, indeed, Luann’s fault because she let Barbara protect her.

Luann asked why she was “chiming in,” and when Tinsley tried to say it was because she had been with Barbara earlier and had talked to her about it, she tipsily slurred her words, which Luann mocked her for.  Luann mocking someone for being drunk?! Well, it was just too much to take, and the ladies all groaned collectively at the hypocrisy.  Except for Bethenny, who had plenty to say.

Bethenny said Luann was “insufferable,’ and accused her of “dining out” on her sobriety, using it as leverage in her career and friendships.  Perhaps much, much worse, Bethenny then accused Luann of not even asking her how she was following the death of her boyfriend, Dennis, and being completely blind to the irony of the fact that last year, Bethenny staged an intervention for Luann, and then lost Dennis to a drug overdose.

Bethenny was on a roll now, and while Lu tried to deflect and deny, she just seemed to gain steam.  She began ticking off all the things she’d done for Luann while she was drinking. This included getting lawyers to consult with her on a Sunday, talking to her kids for her, and parking in her driveway to make sure she didn’t get behind the wheel of her car and ‘kill her friends’ while drunk.  After all that, she said, Luann had had the audacity to leave the rehab facility Bethenny had gotten her into two weeks early.  When Luann said she left early because of work, Bethenny called BS, saying that she left to do her cabaret act, which she said was “sick.”

Bethenny finally dissolved into convulsive sobs, causing the others to fear she’d have a heart attack. But Dorinda said it best—this wasn’t all just about Luann.  Bethenny had a lot on her plate, and she simply could not take the “frivolity” of the conversation with Luann.

The show faded to black from there, but something tells me this is not over.  The RHONY ladies have one more day in Miami before heading back to the Big Apple, and this trip isn’t going to get any better.  Stay tuned!