Home Real Housewives of Beverly Hills News The RHOBH Recap: Erika Gets Upset After Kyle and Teddi Accuse Her of Not Enjoying Being Around the Group

The RHOBH Recap: Erika Gets Upset After Kyle and Teddi Accuse Her of Not Enjoying Being Around the Group 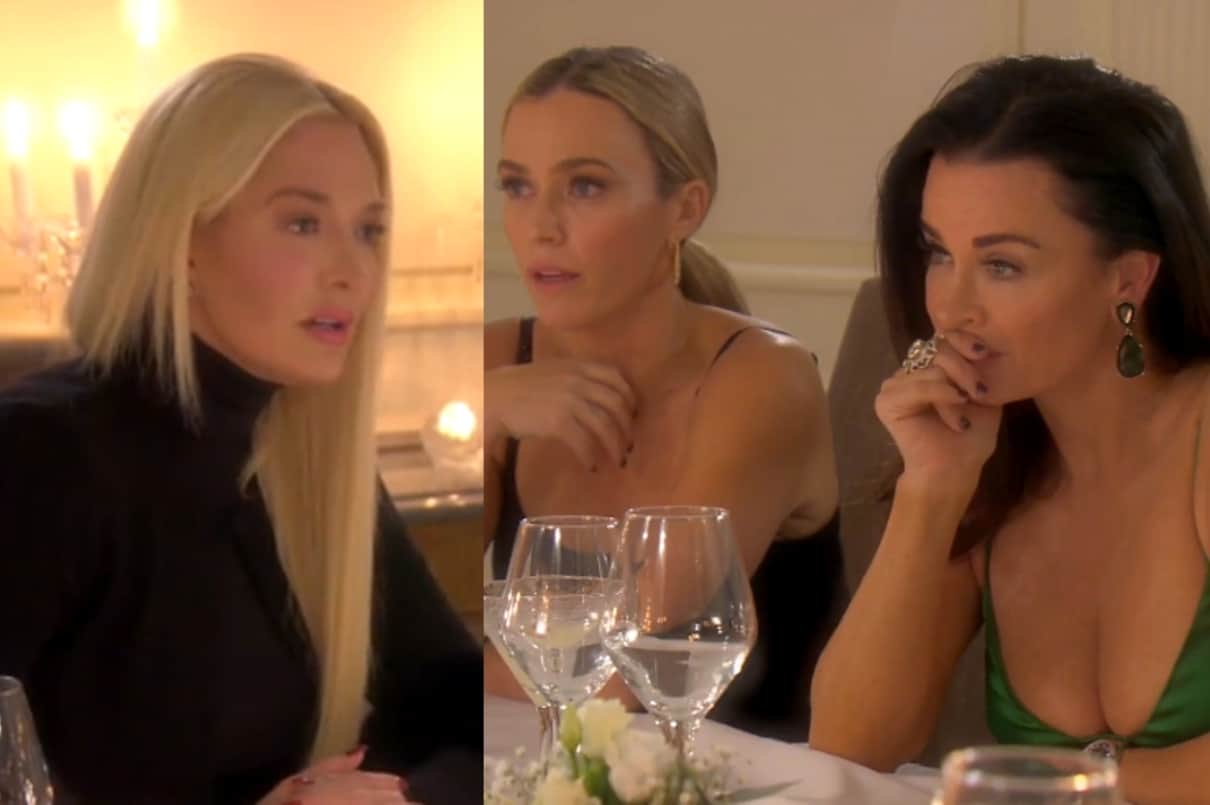 It appears as though Kyle has found herself a new sidekick on this episode of the Real Housewives of Beverly Hills.

Provence, France. A beautiful place tainted by five women from Beverly Hills. Whilst eating breakfast, the women continue fake fretting over their friends back in Malibu who have experienced devastation from forest fires. Erika is in a lousy mood because of a migraine, caused by a “lack of sleep and b*tches” who want her to be offended by sh*t she is not offended by.

Because the vineyard is not until 1:30, the ladies have the morning to themselves. Watching Teddi and Dorit attempting to play squash is painful—literally, since Dorit smashed her head against the wall of the court. I’d watch that instant replay one more time if I could. Perhaps it knocked the fake accent out of her?

Back in Malibu, Denise and her husband, Aaron, make their way back to Malibu. They are in shock over the damage caused by the fire, but they are beyond grateful that their home did not burn down.  Camille cannot say the same. She is stuck picking through the wreckage of her burned down home (please note her husband is nowhere in sight—was that guy simply rented for the wedding?!). It’s a sad sight.

It’s time for the vineyard—naturally, the women are being transported there via helicopter. Wait—what happened to Kyle’s fear of heights? She must’ve momentarily forgotten simply so she could brag about how she planned the trip in style. She pats herself on the back for being brave the entire flight, and (not soon enough) they land at Luberon, the vineyard the women are visiting. It is absolutely stunning and then the wine count begins. After tasting about 11 wines, everyone is crunked…except for Erika.

Erika is sober Sally, due to her migraine. She doesn’t have much patience for the rest of the wined-up women. I don’t blame her. I mean, I love rosé as much as the next girl, but once Rinna begins her infomercial for “Rinna Rosé” she has turned me off completely. Rinna explains that she “never really liked” LVP‘s rosé and proceeds to impersonate LVP. This causes the drunk ladies to erupt in a fit of cackling. Teddi shrieks, “I wanna spend the day with Rinna doing impressions.” Interesting. Wasn’t Kyle JUST giving Rinna sh*t for impersonating Erika the night before, but NOW it’s ok?!

Erika looks like she is gonna beat someone’s a*s. If these ladies had half a brain, they would quit while they’re ahead. It then gets suggested that (after having way too much wine), they should roast all of the women. Kyle, ironically, is the first to jump on the bandwagon and acts as if she is Dorit. Dorit retorts, “I’m not surprised you haven’t had an acting job since you were seven years old.” Boom. While this is unfolding, Erika looks on perplexed. “It is impression after impression and no one here is offended.” Erika, you make an excellent point, considering that Teddi and Kyle were throwing an absolute fit the night before about Rinna’s Erika Jayne costume.

Somehow, they made it out of the roasting and the vineyard alive…but barely. Teddi, Dorit, and Kyle are absolutely wasted and share a van back to the chateau. Teddi states that last night was rough with Erika. Dorit attempts to squash the situation, but when Teddi and Kyle are together, they steamroll over anyone who doesn’t think exactly like them. About Erika, Kyle retorts, “Sometimes it feels like she’s annoyed to be hanging out with us.” Yes, well, that’s cuz you’re annoying.

A few hours later, Erika is the only one on time for dinner, as the rest of the girls are drunk and were too busy putting on $6,000 dresses. Over dinner, Teddi explains that because she grew up without a lot of structure, she prefers order these days. OBVIOUSLY, Kyle feels as though she and Teddi share a similar childhood, which in turn leads to love fest 2k19 between Teddi and Kyle. We viewers get to see just how close these two have become (since LVP has stopped coming on the show, of course) and experience the budding friendship. Gag.

Erika stoically states that she feels more comfortable and secure since the “dark cloud has been removed” from the group. She is referring to LVP. Kyle rudely interrupts Erika to share her unwanted opinion on the topic, and that sets Erika off. Here she is talking about how happy this group makes her and then Kyle has to ruin it. Go figure.

When the night before gets brought up, yet again,  Erika claims that she felt as though Teddi and Kyle were forcing her to feel a certain way about the Farrahween issue. Is it Groundhog’s Day?! Why are we talking about this again? Erika reminds Kyle that, “What’s weird is that you care! What’s weird is that you’re reaching for something!” Way to shut Erika down again, Kyle. She just said she was opening up to the group, but now she’s well on her way to cutting the women out. Kyle can kiss VIP Erika Jayne tickets goodbye if she keeps this behavior up!

With that, Teddi leaves the table and Dorit follows. I am starting to realize how bombed these girls actually are at this point. I am also starting to be concerned that the voices of reason are now Dorit, Rinna, and Erika. What has the world come to? Erika excuses herself from the table, which gives Kyle just enough time to tell Rinna, “I feel like she’s in a bad mood with us all the time.” WHY ARE WE STILL TALKING ABOUT THIS, KYLE? I think she is just offended that Erika is not kissing her a*s for planning the trip to France.

Kyle is so drunk that she forgot what she said once Erika rejoins the group. Teddi just does whatever Kyle does.  Together, the duo let Erika know that they feel like she simply tolerates them and that she doesn’t actually enjoy spending time with the other ladies. To that Erika responds, “I’m kinda feeling a little bullied right now.” Erika is not enjoying the pressure and elegantly leaves the table.

Dorit and Rinna insist that Kyle go see Erika and discuss the issues at hand. Erika, surprisingly, allows Kyle to come into her room and suggests that she and Kyle “be honest” in the morning. This is mainly because Kyle is so bombed she can’t properly form sentences. Why hasn’t she done a split yet?!

Meanwhile, Rinna is acting like Dr. Phil with a blubbering Teddi. How she got to that point, I do not know, but Teddi is a disaster. “I can’t be expected to be the moral compass for everyone all the time.” I love how Rinna basically puts Teddi in her place. Teddi slurs that she feels as though Erika is being fake. Teddi drunkenly cries and explains that she just wants to fix everything. I feel like we have all met a Teddi. You know, the crying drunk girl at the party who wants everything to be “great” all the time.

It’s only 10:32 and this house is falling apart. Teddi legit can’t even walk and Rinna looks exhausted after dealing with her BS. Rinna escapes Teddi briefly to go check on Erika. Can we discuss how Erika is wearing an Erika Jayne t-shirt? That’s amazing. Rinna informs Erika that when it comes to Teddi, “There’s a lot of projection going on.”

Teddi finds herself some fresh blood to cry to—Dorit and Kyle. Teddi claims “everybody hates me.” As Kyle and Teddi have a love fest, Dorit gags and rolls her eyes at the camera. At 11:35, a heckling Teddi summons Rinna from the bathtub. Rinna is legit soaking wet and P*SSED to find Kyle in her bed. Kyle and Teddi play this game back and forth, running from room to room, dodging chips, and eventually settling into bed. Kyle, don’t you realize why no one likes to hang out with you and Teddi? You two are obnoxious. Good luck with that hangover tomorrow…