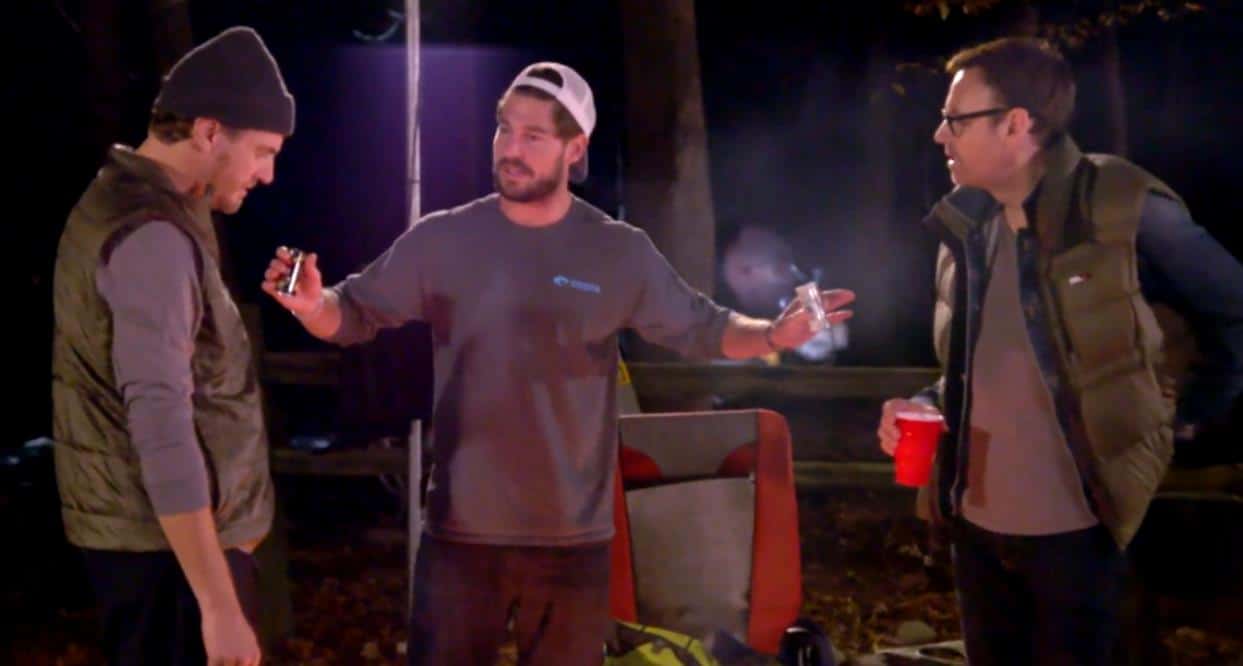 Guys’ trips are not supposed to be dramatic and petty, right??  But on this episode of  Southern Charm, the fellas prove that they are 1,000% capable of turning a good time into a fight.

Patricia is cruising around Charleston in her Bentley, driven by, you guessed it, her butler, Michael. She’s complaining about Whitney‘s plant-based diet and decides to hit up one of her favorite guilty pleasures: MCDONALD’S. How amazing? Who orders a cheeseburger from McDonald’s with “no tomato?” I was actually yelling “amateur” at the TV as Michael placed his order at the drive-thru. But then I remembered ketchup IS tomato, so yeah, there’s that. Patricia is literally my hero. Chowing down on a cheeseburger whilst sipping on a fine red wine in the parking lot. Who has it better than her?!

Clearly the Southern Charm cast likes fast food. Cameran brings over some tacos to Shep‘s house so they can talk real estate. Shep claims he is interested in buying new property, yet he has no clue what he’s doing. What else is new? Shep DOES know how to sh*t talk, though. He fills Cam in on the Kathryn/Danni drama.

Speaking of Kathryn, she is prepping for her boo’s visit. Instead of actually cooking, Kathryn orders in, hides the evidence, and hopes for the best. We get a treat when we meet Joe, her new man. He looks like a cue ball and even Kathryn admits that she wasn’t attracted to him when she first saw him. I can’t imagine why??!! Joe pulls out all of the stops for Kathryn. If you can decipher what he’s saying with his “Chicago/Miami” accent, then you’re golden.

In preparation for the guys’ trip, Craig, Shep, and Austen gather at an outdoorsy type of store to scrounge up some RV goods. Austen explains that he lost his best friend since breaking up with Madison, but I guess heartache is great for Austen, as he actually has some of his beer coming on this trip. And it’s a good thing Austen is back in business, cuz it appears as though these dudes are gonna spend up to $4,000 on supplies.

Madison and Chelsea (in her Curious George hat) talk hair in Madison’s salon. First, they discuss business, and Chelsea suggests the two girls put their heads together and start a salon as partners. Interesting….but then they get to the more important stuff, like Austen. Madison states it’s a shame that things went south with Austen (too bad you had your friend DM that dude, huh?), but she believes that “Shep has Austen p*ssy whipped.” Who wants to date a guy like that?!

It’s RV time, ya’ll! The guys’ trip is about to jump off and I am loving Whitney’s Louis Vuitton luggage for the “camping” trip. It appears as though Shep tore his MCL riding a mechanical bull. I am so glad he is growing up!! Um, why didn’t we know that Whitney was in touring bands? “I was like a Bieber of my day.” I am dead. Shep talks more smack than the girls on this show and he legit won’t shut up about the Kathryn and Danni saga. I thought guys’ trips were supposed to be about beer, farting, and fishing??

Over at the Limehouse Plantation, Bravo is still trying to make Eliza a “thing.” Danni and Naomie are coming for a visit and Eliza is hoping to make peace with the girls since her near-death experience. The ladies are having a fine time riding horses, and then Eliza tells her harrowing tale. She explains that she is trying to move past the drama, but wants to know what Kathryn’s deal is.

Danni lets Eliza know that Kathryn is hard to get along with. Recently, even SHE is having issues with Kathryn. Danni says that she sent Kathryn a text that said, “You just spit on our friendship.” Woah, Danni. Eliza makes it clear that she understands why Kathryn could be behaving the way she is, as being with a man who has a strong personality  can do a lot to a woman’s self-worth (ie: T-RAV).

Austen re-debuts his self-proclaimed “damn good beer,” and with three hours to go until they make it to the campsite, they are starting to get stir crazy. Whitney wants to know Austen and Madison’s status as of now. He also asks to see the infamous screenshots from the Madison Instagram DM.  Austen retorts, “Whitney, you will see nothing until you admit to this whole bus that you f*cked Kathryn this summer.” Amazing.

Cam is busy packing up baby Palmer’s clothes and chats with her doctor husband, Jason. They discuss the nanny that is coming for the interview, and once the doorbell rings, it’s on. Enter Barbara. Cam attempts to grill this poor old woman and spits out question after question. It seems like the two hit it off. But then again, Cam hates being home with her kid so much that she would probably hire a baboon to take on the responsibility.

After what appears to be 14 hours, the fellas finally make it to the campsite. At this point, I would be sick and tired of these guys, especially because they can’t even open the RV door to GET OUT. What a bunch of Einsteins. Anyone else notice how excited Austen is? Whitney looks insanely uncomfortable out in the wilderness— lotsa plant-based options out there, Whitney! Whilst Craig and Austen hunt for firewood, Whitney and Shep sit around the fire and chill out. Typical.

All Whitney cares about is his “non-GMO” corn, and it’s hilarious watching the guys bicker about Craig’s “culinary skills.” When Craig douses the burgers in 14 pounds of salt while they cook on the open flame, they all begin to lose it. Man, these guys are serious about their sodium intake. Craig tells Whitney to STFU, and I have never seen a guy so angered by having his chef-abilities questioned.

Austen feels bad for Craig, but he doesn’t do much to stop “the roast of Craig Conover—starring Shep and Whitney.” Craig is so p*ssed that he legit tosses a hot dog on Whitney. This leads to Whitney chucking a hot dog back at Craig, and Craig storms off to sleep. Someone is touchy.

Austen tells Whitney and Shep that they are like “the two muppets in the balcony,” which is a pretty spot-on description. Austen is annoyed with the “a*s hats” and is confused since he thought the guys planned this trip to help him get over his break-up.  These guys are so self-centered.  Seems like it’s gonna be a looooong ride back in that RV after this drama…