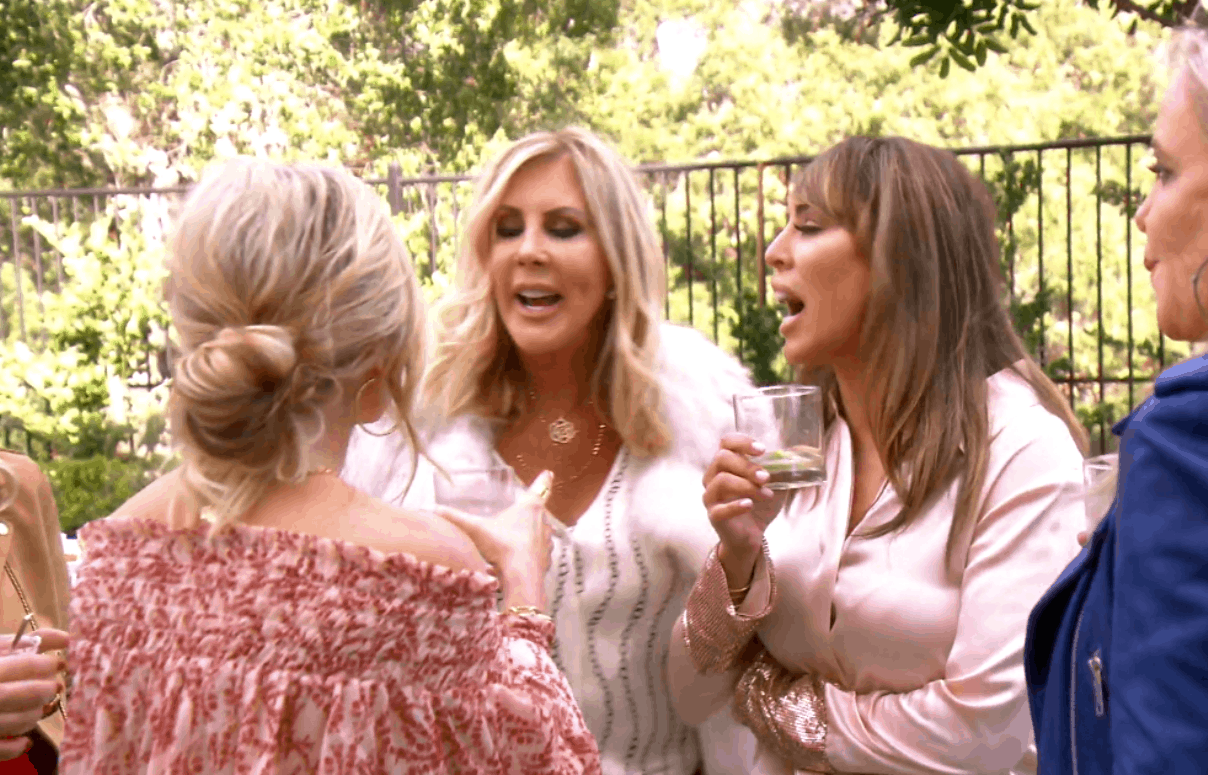 On this episode of the Real Housewives of Orange County, we learn that sometimes one comment can ruin a friendship… and a person’s reputation.

Kelly is busy trying to dominate her teenage daughter in tennis, and as soon as she gets a free minute to sit down with Jolie, she brings up Dr. Reagan, her new boyfriend. Essentially, Kelly wants to cash in on Jolie’s pimple problem and turn her into a walking ad for Dr. Reagan’s business. The problem is, Jolie isn’t having it because…“People are DMing me calling you a cokehead.” Oh man. The residual effects of a Vicki comment are coming back to haunt Kelly. Jolie explains, “That’s why I don’t want to be the face of the company.” Kelly is concerned about the bullying Jolie is facing, buuuuut not enough to stop pushing her to help launch the new company idea.

In the meantime, Shannon‘s eldest daughter, Sophie, is getting ready for the winter formal, and she clearly has forgotten her pants. OMG, why is her dress so short? Shannon demands to know what time her daughter will be home because Shannon isn’t sure what time she will be home. In case you forgot, Shan is “whooping it up” this season and has a life of her own. When Sophie’s date arrives, Shannon does a fabulous job of embarrassing her daughter in front of her date. But hey, that’s easy when you have no filter like Shannon.

Emily is hoping that “Shane may actually come home tonight.” According to Emily, since Shane has been studying for the bar exam, he hasn’t been home often (aka never). Therefore, Em is stuck struggling with her personal chef and nanny whilst raising her children and hosting dinner parties for her mother-in-law’s birthday. Rough life, huh?

As Shane’s fam dines at Emily’s, she tries to FaceTime her hubby, but he declines the call. He then calls Emily back and shouts, “I’m getting like hounded by everyone. It’s like a degree of harassment. I’m supposed to call to say hi, how’s it going?” EW. I don’t even particularly like Emily, but no one deserves to be treated like that. Especially by a little troll like Shane.

We have a crazy mama back in the picture on this show. First, it was Lydia’s mom. Now enter Braunwyn’s Cyndi Lauper lookalike mother, “Dr. Deb.” Braunwyn describes her mother as larger-than-life, but I think she just looks like she swallowed a rainbow and spent waaaay too much time at Burning Man. Can we discuss the fact that the bedtime for ALL of Braunwyn’s children is 7 pm?! Even the big kids? I am not sure what I’m more concerned about…Dr. Deb’s colorful dreads or the fact that these children are babied like crazy?

Over at Gina‘s new crib, Kelly comes visiting. Gina lets Kelly know that she has a date tonight that she’s a bit nervous about. I mean, according to Gina, the guy “used the word respite.” You bet that Gina had to google the definition of that. Despite the fact that Gina doesn’t wanna mess up her beautiful co-parenting situation, she’s still planning on going on a date. This girl is a hot mess express.

OMG. Braunwyn’s Valentine’s Day surprise for her hubby. Braunwyn attempts to justify the fact that the couple shares a place called “the love shack” by saying they’re simply never alone at home. “We have seven children. Two nannies. And a housekeeper.” SO, therefore, they DEFINITELY deserve this extra property to decorate with rose petals once or twice a year. OMG. People like this really exist?! During this so-called alone time, Braunwyn talks about all the new girls she has met and reflects on her relationship with her husband. Then she seduces him. Braunwyn better relax, otherwise she is well on her way to baby #8.

Tamra and Eddie spend their Valentine’s Day at a snazzy restaurant. Eddie buys Tamra some wack pair of Valentino shoes that I would never buy in a zillion years, and then he proceeds to order what Tamra would like to have for dinner. WHY. Eddies remains baffled by Tamra’s friend choices and straight-up calls her out. “You’re excusing every action she (Shannon) did last year?” Interesting that Tamra is willing to forgive Shannon, but is still a bit skeptical of Vicki and her intentions. Tamra claims that she still can’t figure Vicki out. It might be because she can’t quite tell her true emotions based on all of the work she had done.

It’s the day of Tamra’s housewarming party—you know, the one where she invited all of her friends to and then causally mentioned it to Eddie after the fact. Hilarious. All of the girls are on their way to the party (Vicki included!). Tamra pretends to set up the tables to feel involved. Gina and her leopard print jacket are the first to arrive, and Emily is next. Homegirl is just excited to be out of the house and away from her children. Things are a bit awkward when Shannon and Kelly arrive, as Shannon isn’t quite on good terms with Emily after last season. Emily explains that Shannon blocked her on Instagram, and Shannon pretends like she doesn’t even go on “the Instagram.” These women…

Braunwyn rolls up with her hubby, Sean, who may or may not be channeling Elvis with his super cool shades. Kelly fills Braunwyn in on who Vicki is and explains that she straight-up doesn’t like her. There’s bound to be drama momentarily between Vicki and Kelly. The ladies never resolved the whole thing when Vicki essentially called Kelly a cokehead. Because Kelly cannot control her anger OR emotions, she lashed out at Vicki by sending a talking pig video to her. Although very funny, it’s highly offensive to Vicki, and thus, the drama has continued way after the cocaine accusations. Therefore, tensions are high when Vicki arrives at Tamra’s party.

Kelly comes in hot and bad-mouths Vicki’s white fur vest. “She looks like Sasquatch.” Leave it to Kelly to say what everyone’s thinking. New-girl Braunwyn tries to stay relevant by somewhat siding with Kelly and spitting out words of wisdom like, “Not everyone is gonna love you and if they do, then you’re doing something wrong.” Excellent advice, Braunwyn. Kelly explains that her strategy for the day is to stay away from Vicki. She doesn’t wanna engage with Vicki, but Vicki has other plans.

Vicki, as always, plays the innocent victim and seems to still believe that the old tit-for-tat is the best way to fight, even well into your fifties. She claims that she cannot understand Kelly’s rage, but Tamra tries to justify that retaliation is not the best tactic and that calling Kelly a cocaine user has really messed up her reputation.

Hold up—Kelly’s “Malfunctioned facelift” line about Vicki is by far the best comment. Remind me to never get on Kelly Dodd’s bad side. Tamra attempts to set up a chat between Vicki and Kelly, but Kelly shuts it down fast. Vicki believes that both women are wrong, but alas, she won’t take all of the blame, as usual.

The events that happen next are cringeworthy, as Vicki straight-up chases Kelly around Tamra’s house, attempting to “talk” to her, but really just getting frustrated and slinging insults at Kelly like, “You think you’re a beauty queen?” The other women watch the entertainment unfold, and I’m proud of Kelly for calling Vicki on her bullsh*t. She straight up lets her know the truth. Vicki has not only hurt Kelly, but she has also hurt her daughter, a low blow even for Vicki. Doesn’t seem like these two are on their way to repairing a friendship any time soon…