Home Vanderpump Rules Vanderpump Rules’ Lala Kent Fires Back at 50 Cent’s Cocaine Allegations and Takes Stand Against Cyberbullying as He Slams Her Again, Plus Ambyr Childers Weighs in on Their Feud

Vanderpump Rules’ Lala Kent Fires Back at 50 Cent’s Cocaine Allegations and Takes Stand Against Cyberbullying as He Slams Her Again, Plus Ambyr Childers Weighs in on Their Feud 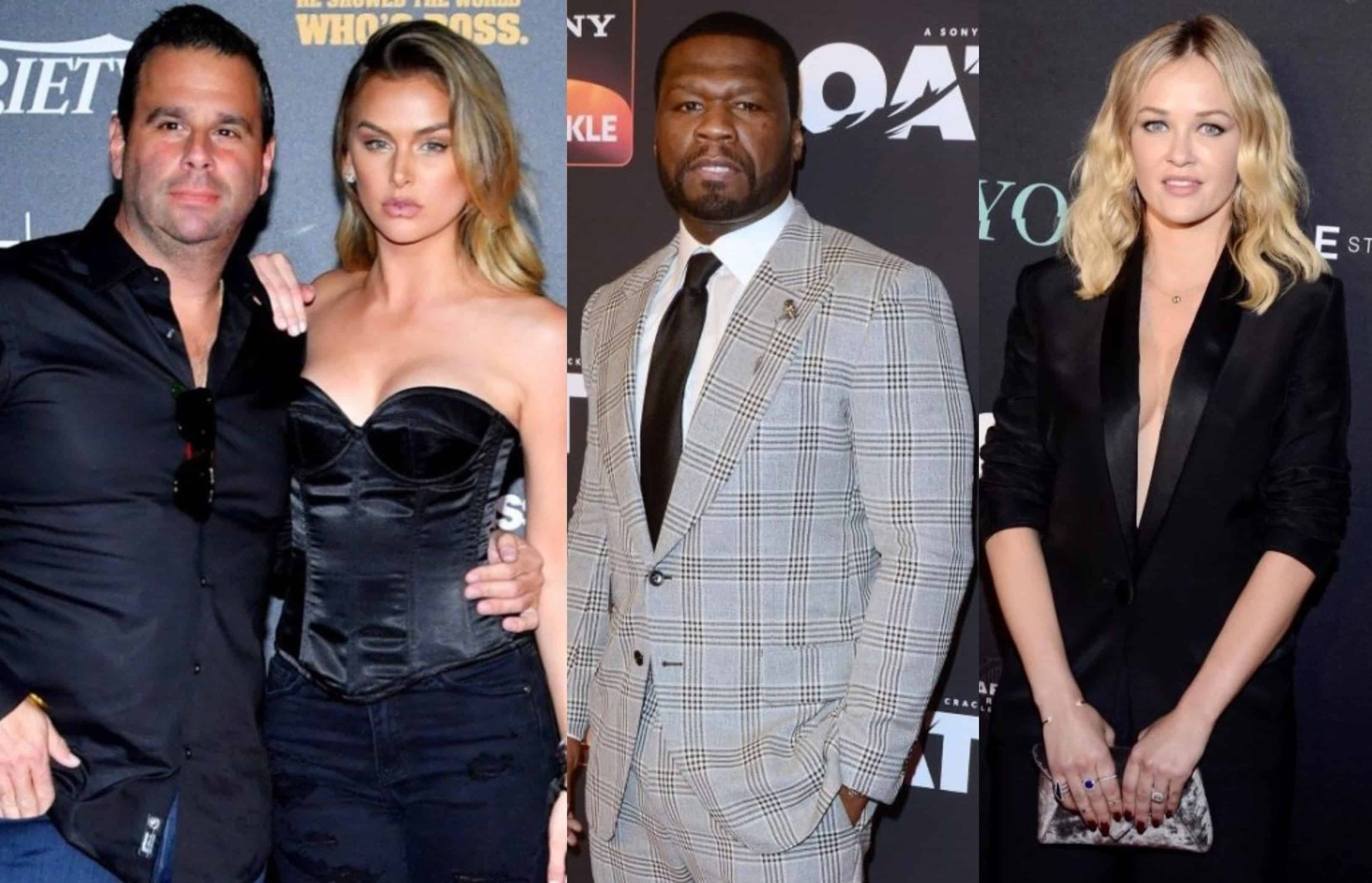 Lala Kent is fighting back after being accused of cocaine use by 50 Cent.

After telling Andy Cohen that she took pride in having “dinged” the rapper’s ego on Watch What Happens Live last week, the Vanderpump Rules cast member took to her Instagram page and reacted to the way in which 50 Cent fought back against her statements by suggesting she was “high” and “drunk.”

“My sobriety is something I’m proud of and work on everyday. I’ve never done cocaine nor were any other substances, other than alcohol, involved in my decision to get sober,” Lala wrote in an Instagram story on September 15.

“The past couple of days I’ve been slammed to say the very least. People have asked me how I’m maintaining keeping my head up… To me it’s simple- I know Real Life from the illusion of social media,” she continued. “I know what it feels like to have your world crumble. Getting a phone call from your brother saying your dad has passed away… that is earth shattering. Being called names and falsely accused of things… that is from from earth shattering.”

According to Lala, she is mentally strong and feels she can handle the criticism and disses that often come her way. However, as the Pump Rules star mentioned, not everyone shares her mindset when it comes to online hate. She wants those people to know they are not alone.

“I can’t help but think about how many people are taking their own lives, daily, due to cyber bullying,” Lala said. “It is imperative that I tell you, you are not by yourself. I see you. I stand by you. I’m on your team. You are loved and make a difference in this world.” 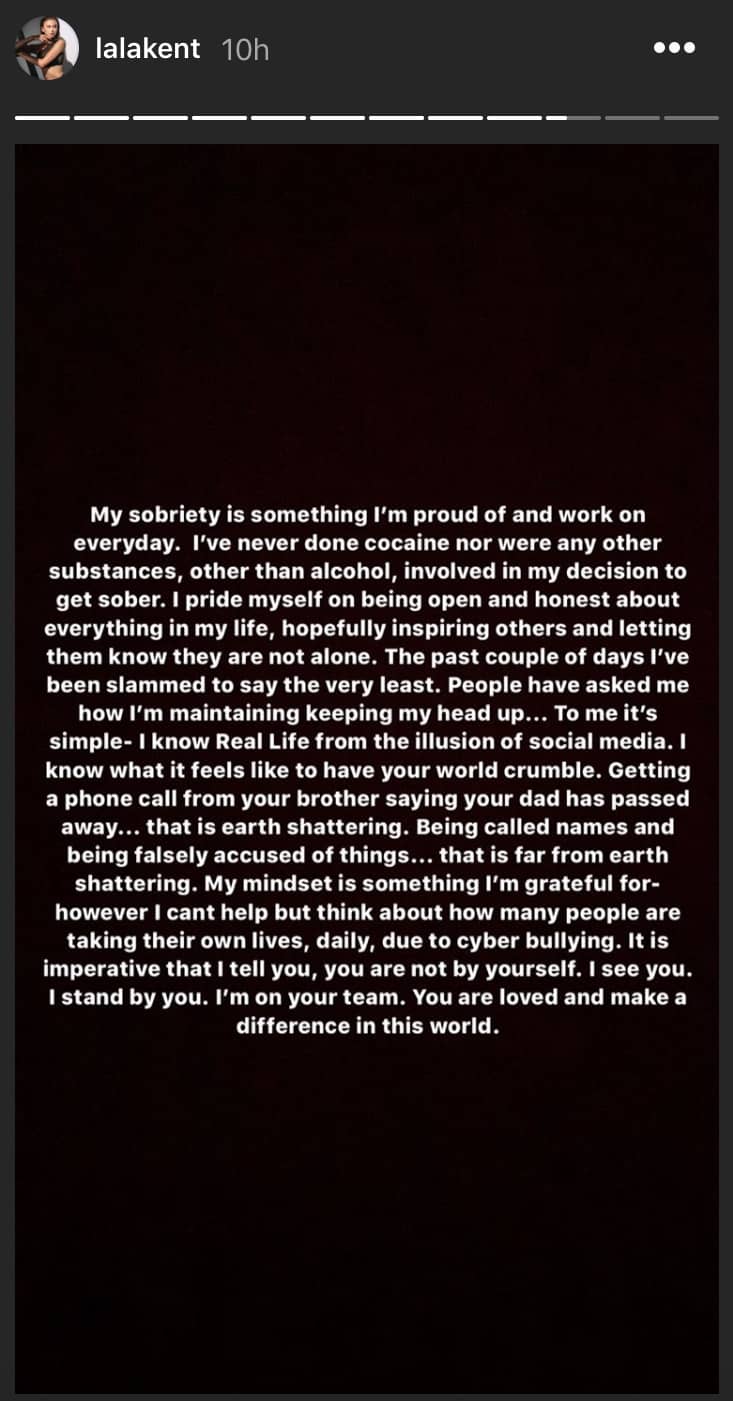 After Lala’s post was shared, 50 Cent responded to the post, telling the Pump Rules star to “shut up.”

The following morning, he dissed Lala again as he shared a photo of her and Randall.

“Rise in shine puffy face, it’s gym time but I’m sure your having a hangover. Welp here’s to life buck O. LOL,” he captioned the pic.

During her appearance on WWHL last week, Lala said she had “receipts” proving she “dinged” 50 Cent’s ego, but she said she wouldn’t share those receipts because she “ain’t that girl.”

In response, 50 Cent shared a number of posts on Instagram, one of which mentioned Lala’s admission about being drunk for four days straight during a visit to Disney World with her fiancé, Randall Emmett, and his two young daughters.

“Oh this b***h be drunk 4 days straight. She must just be on some drunk h**, I don’t remember type sh*t,” the rapper wrote on Instagram.

Following the online drama, Randall’s ex-wife, Ambyr Childers, made it clear she was amused.

In the comments section of a video shared by 50 Cent in which Lala admitted that she let Randall “hit it the first night,” Ambyr wrote, “Oh boy…here we go again! I need a glass of wine for this one.”