The RHOD Recap: Kameron Calls Brandi “Trash” and Throws Napkin in Her Face 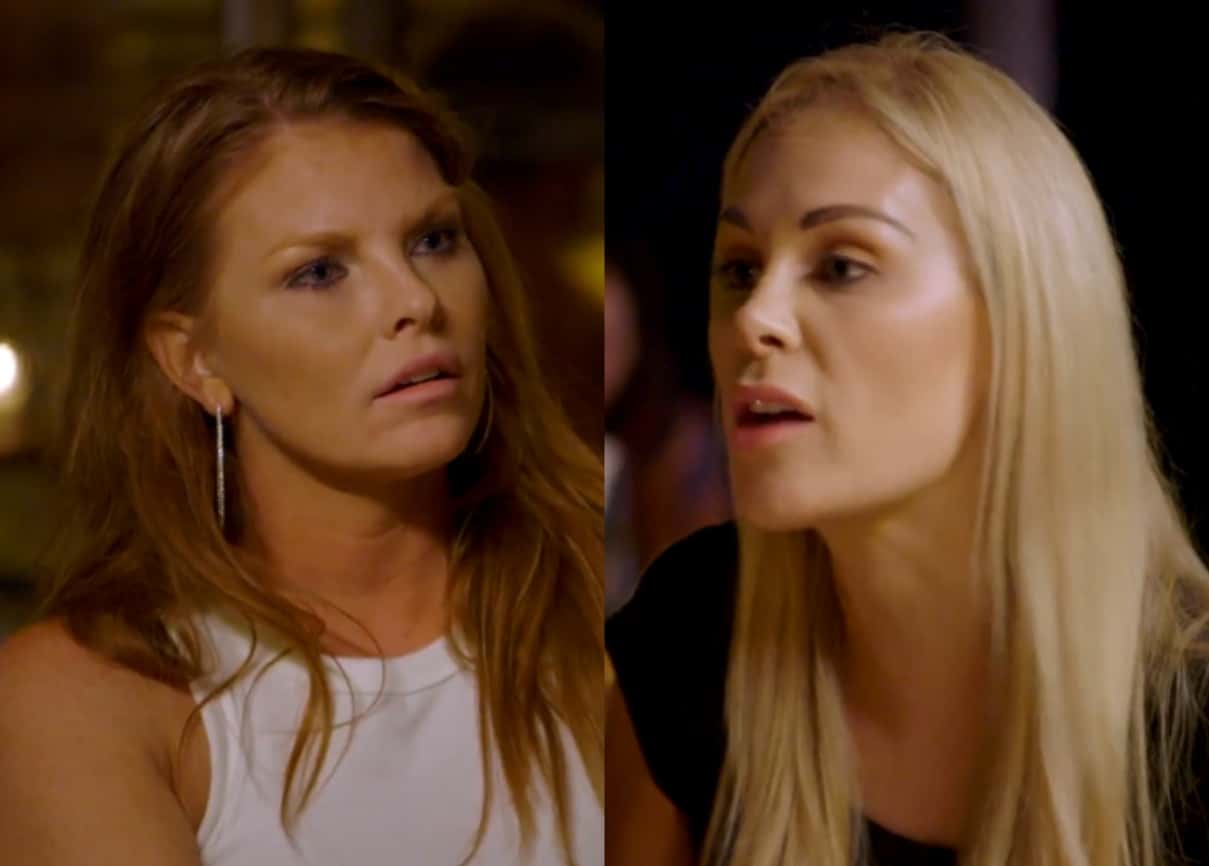 The ladies of The Real Housewives of Dallas were back at it last night, and if you thought they got off to a bad start on the trip to Mexico last week, things only went from bad to worse.

As the sun rose on their first morning in Mexico, everyone was trying really hard to get along.  Kary suggested they all climb her very impressive outdoor staircase to get some exercise, but LeeAnne declined–hard.  When Kary and Brandi went on their own, Kary was eager to get Brandi’s perspective on the awkwardness between her and LeeAnne.  The two women had had words the day before, and then LeeAnne had trotted out her stories about her painful childhood and subsequent suicide attempts.  Now, is this her truth? Yes. Does she have every right to speak it? Absolutely! But here’s the thing: it also renders any decent person speechless.

Imagine: you’re snarking back and forth with someone, and they bring up something horrific and unfathomable–do you continue arguing with them over the fact that they’re “being negative” about the trip you’re hosting? Absolutely not! To do so would make you self-centered and just plain cruel.  But not doing so means you lost.

And poor Kary.  She not only lost, but she also flinched, and LeeAnne saw it.  She was finished before she started.  Brandi knew it was true, and as she and Kary discussed it, she said she wasn’t at all surprised that LeeAnne brought up her past.  She said that while she’s in a good place with LeeAnne these days, she also doesn’t care for her tactics.

The whole thing had Stephanie upset too.  It triggered thoughts about her own suicide attempt.  When she finally got a few minutes alone with Brandi during their outing to a polo match, she admitted she had been feeling off during this trip because she wasn’t rooming with Brandi, as she normally did.  She admitted to using Brandi as a “security blanket.”

You see, Brandi sort of helps loosen Stephanie up, and she helps her not to take everything so seriously.  In her confessional, she mentioned constantly feeling as though ‘no one would like her’ and she ‘wouldn’t have any friends’ if she spoke her mind and allowed people to know how she really thinks sometimes.  Wild child Brandi gives her permission to be herself.

Later, all the ladies went and sat in some huge metal bowl that was also a “receptor,” although what it was receiving remained a mystery.  Inside, they stretched and meditated, and apparently giant bowls have a wonderful effect on people.  Stephanie and Brandi both said they felt a “release,” and D’Andra even cried.

Now once you’ve meditated and gotten all zen, what’s the first thing you do? I can tell you that whatever your guessing is wrong! The correct answer is tequila shots, of course! The ladies went to dinner at a local spot, and the drinks went down really easily.  Before long, Kary and Kameron were telling each other how much they just “love” one another.  As you can imagine, LeeAnne was not having that.  Kameron is her puppet, damnit!

But before LeeAnne could even pounce, D’Andra announced (at the top of her lungs)  that it was time to “address the elephant in the room,” i.e. the spat between Kary and LeeAnne.  Now, mind you, for the moment, there was no elephant–there really wasn’t even a room.  Everyone was cool, and they had been all afternoon.

So why, D’Andra, why?! That’s certainly what LeeAnne wanted to know.  She looked at Kary and suggested they speak privately.  But when the two women stood, presumably to go chat, D’Andra told them (at the top of her lungs) to sit down right there and talk.  Why?  So that there could be a scene; so that everyone could pick sides; and so there could be drama.

When LeeAnne objected to having the conversation in front of everyone and Kary continued to walk away, D’Andra yelled at her to “sit her f***ing  a** down, and talk–NOW!”  She went on to explain that “sidebars” were “not good” for this group of friends.  Sheesh!

Now, wouldn’t you know that after all of that, it ended with Kary apologizing to LeeAnne if she felt “unwelcome” in any way, and she explained that she’d felt “hurt” when Leanne chose not to room with her on the trip. Kary was near tears at this point, and LeeAnne told her that hadn’t been her intention and also apologized.  But you see what she did there? Kary flinched, Kary shut up, Kary apologized first, and she got choked up.  LeeAnne got her.  She never stood a chance.  And LeeAnne was far from finished.

Even though LeeAnne had clearly won her battle with Kary, everyone was beginning to give her the side-eye because, well, she’d made the sweet little lamb cry, and that made her look bad.  This meant that it was time to turn the tables and make herself look like the injured party–in other words, a classic LeeAnne pivot.  She said that she actually had felt like Kary hadn’t wanted to room with her because when she was giving the ladies the tour of the house, she referred to the room as hers, rather than hers and LeeAnne’s.

At this point, Brandi tried to step in and told LeeAnne that Kary hadn’t said that at all. But LeeAnne told Brandi to butt out because there was no argument between them–unless, of course Brandi ‘wanted there to be.’  Brandi said, during her confessional, that she was disappointed to see LeeAnne reverting back to her ‘old’ ways, the ways she “hates,” by coming up with constant excuses for her behavior instead of just owning it.  But you know what?  In the end, Brandi shut up too.

LeeAnne went on to say that she’d felt “unwanted” and ganged up on since they’d been there, adding that she’d ‘taken sleeping pills’ because she was so upset that she couldn’t sleep.  Damn, she’s good!

Once it was finally quiet–because what can you possibly say after that–Kameron spoke up and said that they all really needed to try to get to know everyone else when they took these trips instead of just sticking to their “cliques.”  Brandi wanted to know what clique she was referring to, although it was quite clear she’d been speaking of Brandi and Stephanie.  And so, Brandi motioned to the space between Kameron and LeeAnne and said the only clique was right there.

Then, Kameron said that it had been great getting to know Stephanie during the trip.  She said that in the past, Brandi’s presence had made that difficult, and maybe Brandi didn’t actually want to get to know the others, but she did.  Brandi said that she and Stephanie hadn’t been the one hiding in the corner and making plans to room together. As she continued to get angrier and angrier, Brandi stood and leaned across the table to get in Kameron’s face, and she dropped the f-bomb.

At this, Kameron threw her napkin in Brandi’s face and told her never to speak to her that way again.  As Kameron walked away, she turned and hurled the word she knew would hit Brandi hard: “trash.”  Brandi called after her to “suck a d**k.” Yep — things had gotten very real, very fast.  Tequila!

Kary and Stephanie went after Kameron, leaving Brandi to walk off by herself.  And Stephanie’s excuse for leaving her bestie all alone?  When people fight, it is her policy to “go after the one who is the most hurt,” and in her opinion, that was Kameron.  Kary continued talking about how much she lover Kameron and promised her that she was more than just LeeAnne’s “dingleberry,” like ‘everyone says.’  Is that what everyone says?!

Back at the table, LeeAnne and D’Andra sat awkwardly regarding each other from across the table.  D’Andra was completely trashed, and LeeAnne just wanted to leave.  D’Andra tried to argue once more about the way LeeAnne had treated Kary, but she kept breaking into giggles.  LeeAnne suggested that they go join the others in the van, and D’Andra seemed surprised that there was a van waiting for them, despite the fact that the same van had been driving them around all day.  LeeAnne finally helped her out of the restaurant.

Once everyone was seated in the van, Kameron apologized for throwing the napkin.  Brandi quickly reminded her that she had also called her “trash,” and not for the first time.  It’s a sensitive word for Brandi, as it triggers memories of her childhood and having friends whose parents didn’t want her playing with Brandi because she lived in a trailer.  Kameron apologized for that as well, and it seemed like the matter was dropped.

Back at the house, Kary sidled up to Brandi while she was in the pool and asked how it was that she and Kameron had managed to make up so quickly.  Wait–what?! I thought she “loved” Kameron?  But she did the right thing, she called Kameron over, and she tried to get her to see how hurt Brandi was to be called “white trash.”  Kameron’s response? “I didn’t say white.” Oh–okay.  She added that she hadn’t been calling Brandi trash–only her behavior. She also said that she couldn’t believe Brandi was ‘playing the victim.’  Brandi ignored that and told Kameron that throwing a napkin in someone’s face was ‘pretty trashy too.’  Kameron said she was “mortified” by her behavior and ran off crying.  Wait–what was that about ‘playing the victim?’   Brandi soon began crying as well.

As Kary comforted Brandi, and Stephanie stomped out of the room she was sharing with Kameron in solidarity with Brandi, and LeeAnne laid down to sleep, D’Andra kept on dancing in the background, drunkenly and blissfully unaware of the drama she’d started.  And it was only night two!

The ladies will continue their trip when RHOD returns next week–stay tuned!