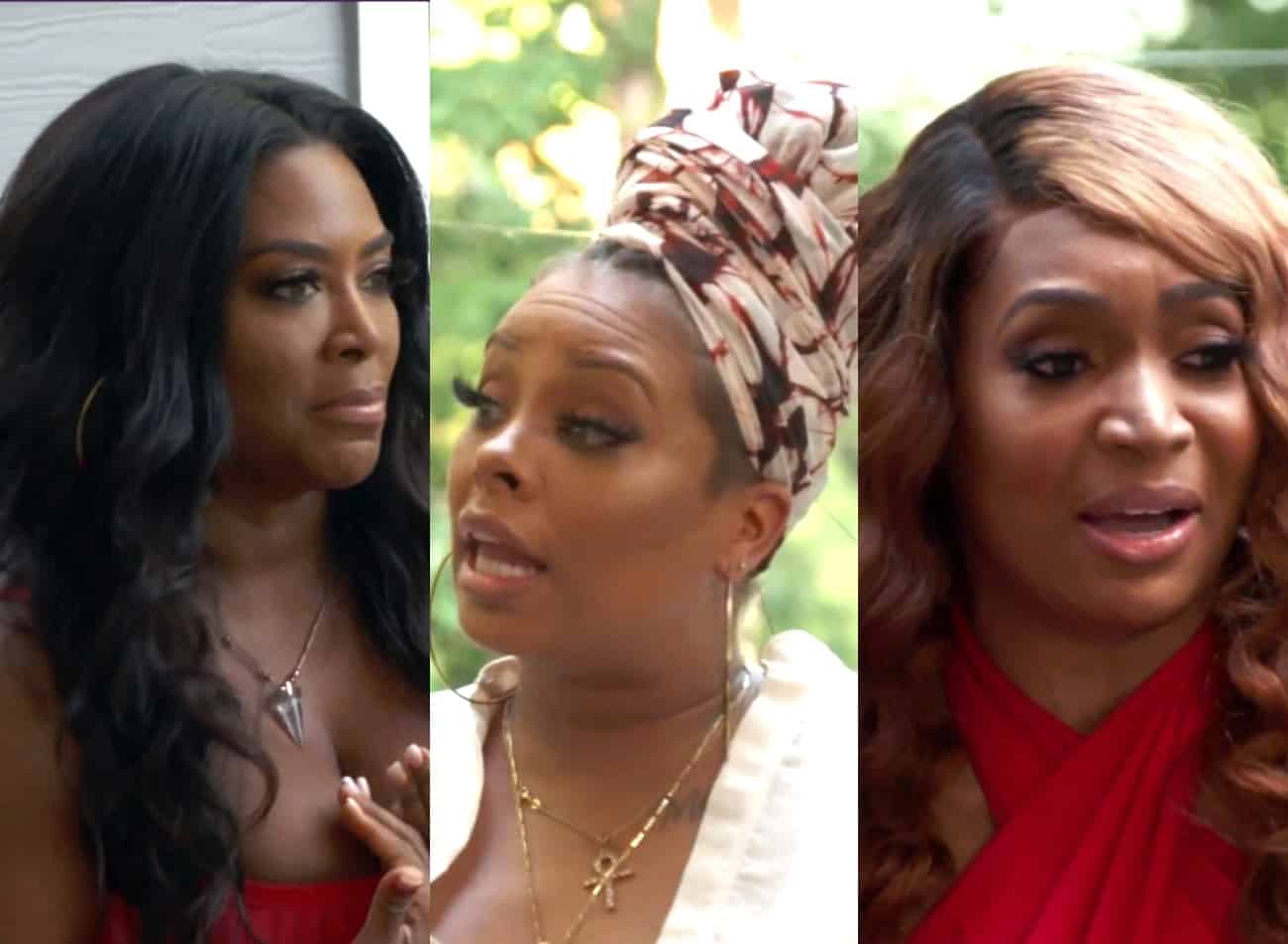 This week on The Real Housewives of Atlanta, we are heading to the Bailey-Que to get grilled and read…

Cynthia is planning her “Bailey-Que”. You need to wear red or get read…. Red is the color of extremes so it is appropriate for this group!

Porsha and Kenya are taking a “jitterbug” class with their babies, which involves a lot of bouncing, twerking, and hip rolls. For some bizarre reason, Kenya wears heels to an exercise class WITH her baby strapped onto her? Kenya shares with Porsha that things are not exactly blissful with husband Marc.

Riley is getting her own place in NYC ($5500 per month), and as Kandi says, it’s like “moving on up like the Jeffersons!” She is interning with a law firm in New York City for the summer. Riley tours her lush pad as we all secretly wish Kandi would adopt us! Riley then reveals that she hasn’t seen an ice tray before?? She definitely has lived a privileged life and is under the illusion that the apartment cleans itself! She will get a reality check, or Kandi most likely will hire a maid! Jelly!

Marlo (the only friend who will film with Nene) arrives at Nene’s for what she thinks is an apology dinner. Sorry, wrong house! Yovanna (thirsty extra who will film with Nene just to be on TV) arrives for dinner and she is serving as the bone collector this week. Nene says she loves Yovanna because they laugh and “kiki” together, which means they like to kick back and gossip. CONFESSION, I had to google “kiki” since I admittedly am not hip enough to know what that meant!! Yovanna has “receipts” on Cynthia talking smack about Nene and calling her toxic and a burden. I think Yovanna is working on taking that peach from Cynthia since she is coming for her hard.

Eva is the first to arrive at the Bailey-Que. Cynthia doesn’t want kids at the party, which Kenya doesn’t appreciate at all. Eva gets snarky, saying, “it’s called welcome to motherhood” when your choices are made around your kids. Of course, she has to throw in the “over the hill mom” dig too.

The other ladies, minus Nene, arrive at the party. Yovanna arrives and Cynthia actually greets her graciously and thinks she is a friend. It is foreshadowing for what is to come! Yovanna shares that she told Nene how Cynthia was trashing her. That didn’t take long…. Cynthia 100% owns everything she said about Nene, and good for her finally growing a pair! Porsha brings Pilar, which is a mistake around these vipers, and also it was supposed to be “kid-free” for good reason. I have to agree with Eva when she says, “you don’t want your babies around such negative energy.” She actually has a point!

Kenya re-gifts a present from Eva meant for Brooklyn to Pilar. This reminds me of the “bunny debacle” from the Real Housewives of Beverly Hills when Lisa Rinna gave Kim Richards a bunny for her grandson. Kim gave it back to Lisa because she thought it came with “bad energy.” First of all, who announces they are re-gifting something in front of everyone? This is most definitely a producer-driven scene using the “bunny scandal” from RHOBH. They really need to stop recycling storylines. Porsha tells Eva, who was not in the room, what Kenya did with the doll.

Kenya and Eva get into it over the party about Brooklyn. She is being really aggressive with Eva about her talking about the bad energy at the party that she couldn’t bring her children around. Kenya makes a veiled threat that “you don’t want a problem with me.” She basically tells Eva ‘you can’t hurt my feelings because I don’t give a damn about you.’ Okay, so if that is true why is she yelling and getting all fired up???

Kenya, of course, has to pile on the comment Eva made in the past that Cynthia was paying Mike to date her just to stir up trouble. Cynthia tries to interject by saying it’s the past, and she tries to change the conversation. However, Kenya refuses to move on and is pretty dismissive to Cynthia. Kenya reminds me of someone who fights with everyone because their real anger can’t be directed at who they are really upset with (Marc).

Marlo is looking for some camera time, and so she goes in on Eva. Kandi is accurate with the “King Kong” and “Godzilla” analogy. Eva tells Marlo that she says mean s***. Marlo tells Eva she is fake and living above her means. Eva gives her a low blow, saying how Marlo doesn’t understand what it feels like to be pregnant. Eva bails on this s*** show while Marlo is saying “run, run run” and she is a fraud. Pot, meet kettle!

Marlo then refocuses her venom on Cynthia. Marlo basically says Cynthia is two-faced. Kenya finally defends her friend Cynthia by saying she is a strong woman. Marlo is definitely stirring stuff up telling Kenya that she should be passive just like at home! On a side note, they definitely needed those fans to put out those flames from the fires they were all starting! There is a small cease-fire before game time.

They are going to play a game that might end up in a fight club at this rate! Shamea wins the award for “best twerker.” How is that even possible after watching Porsha twerk?? I don’t see how she can make her booty jiggle like that? She must have great booty control! They now have the “shady boot” award, which goes to Marlo, surprise, surprise! Kenya gets the “best read” award, and now they are giving the “most- thirsty” award…. This is going to get ugly.

Porsha thinks Yovanna should get the award because of her Instagram video, which is hilarious! Last but not least, the “most insecure?” This should go to Kenya breaking down over her unhappy marriage, and I didn’t see that one coming. I thought this was going to end up in a wig pulling brawl, but instead, the ladies offering kind words to Kenya — even Marlo.

Next week, Marlo has a wig launch and Kenya walks in with a marching band holding signs that say “Your Edges Matter” advertising her own product?? Marlo is definitely going to lose her wig over that one!