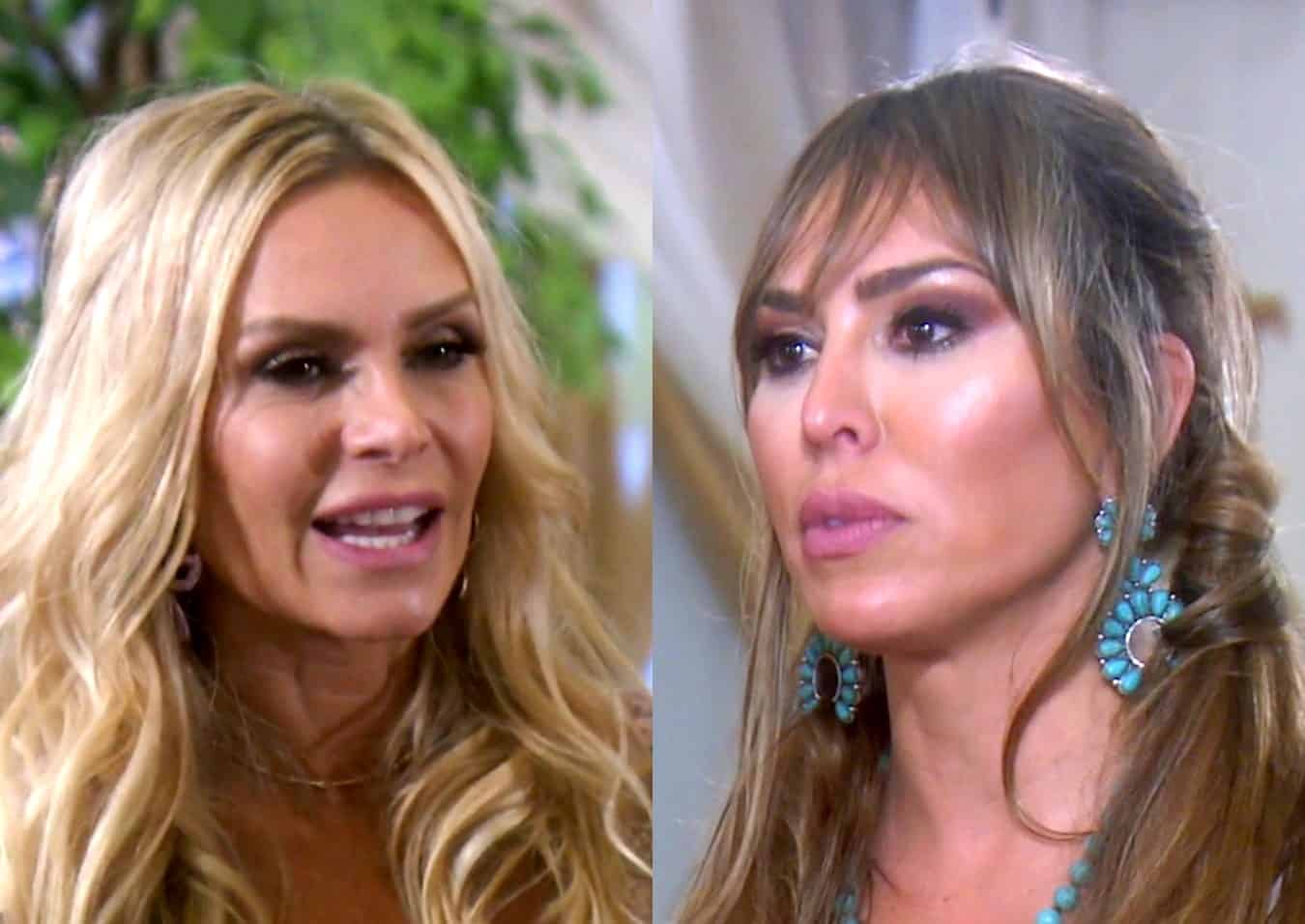 Is it me or has this been the LONGEST season of the Real Housewives of Orange County?  It’s the season finale, and here’s to hoping the relationships get mended in time for the reunion.

Shannon is out on a date….and not with Babe. WTF. She seems pretty happy with this new dude, and he is even coming with her to Vicki‘s  engagement party. What is that guy thinking? The party is “formal western farmhouse chic,” whatever the hell that means, and Shannon explains that Duff, the new guy, actually works with Vicki. What a small, small world. Gag. Duff proceeds to be very forward and rude to Shannon, saying things such as, “You look great, but back it up a year…what happened?” Yikes.

Meanwhile, Gina is sporting yet another new do, and she is busy packing up her Coto house. Emily comes over to give some moral support and to hear the latest deets about Gina’s ex, Matt. Gina explains that things have been going great with him, so therefore, she is “seeing this relationship through.” Emily can’t get over all the red flags with this “saved” relationship, but then again, she’s married to Shane, sooo…who is she to judge?

Braunwyn’s mom, Dr. Deb, is 100% off her rocker. I feel like I am on drugs watching this yoga session, and it makes me really wonder how far these people will go financially to make things “better.” Braunwyn has been having a tough go with her mom, so she has high hopes that this can smooth things over. Dr. Deb explains that she got judged hard when she sent Braunwyn away to boarding school, and Braunwyn states that of all the relationships in her life, this one is the most complicated…maybe because Braunwyn and her mom look like they are the same age. #weird.

Emily is finally seeking medical attention for her arthritis. She limps around in front of the doctor, which is interesting because I am pretty sure she didn’t limp on her way into the office. The doctor lets Emily know that she’s gonna need a hip replacement, which is a pretty heavy diagnosis. When Emily phones her sweet husband, Shane, he shows little to no sympathy and tells her that she let it go for way too long. Way to be her partner.

On the day of Vicki’s engagement party, Tamra is getting her face professionally painted on and her hair professionally attached. In fact, all of the women are going all out for this party. Kelly, who has recently decided to attend the event, feels like a new woman after going through some anger management. Kelly is still a bit leery about “going into the lion’s den,” but you better believe she is still going.

Shannon and Tamra, the party planner extraordinaires, are the first to arrive at Vicki’s yee-haw engagement party. Next comes Gina, who outwardly admits, “I’ve made a lot of bad choices regarding my hair this year.” Well, thank GOD she realizes it, but I am still not sure if the short hair was the right thing for her.

Wait. Why the EFF is Braunwyn’s mom a guest?! Also, let’s discuss Vicki’s outfit. She missed the memo about the theme of the party, I suppose, and looks a bit like a seventh grade ice skater. While at the party, Tamra is STILL complaining about her legal bills, which she says is over $300,000, and in turn becomes angry at Kelly all over again. Speaking of Kelly…OMG. I love how Dr. Brian, Kelly’s boyfriend, is coming up with practice scenarios for Kelly on the way to the engagement party. I am still unclear why Kelly is insisting on attending, especially if she is so angered by these women.

Vicki’s second lewk is almost as bad as the first one. The women are line dancing and pretending to have fun, and the only one who is honest about how lame this party is is Shane. Gotta love him.

Later, Billy, Vicki’s brother, tells Shannon and Emily, “I’m just questioning if he [Steve] wants to get married again.” Ooph. To break up the awkward convo, Kelly rolls up looking like Pocahontas. Tamra loves to stir up the drama, yet again, and is annoyed that Kelly is acting “like we are all good friends. Like, who do you think you are?” In the meantime, once seated at dinner, Emily is nervous for Shane, as today’s the day he finds out if he passes the bar exam.

“Dude, you get around like a record in Newport.” Uh oh. That would be Kelly’s greeting to Shannon’s date, Duff. The tres amigas look on from a distance and Tamra, after a few tequilas, really wants to knock Kelly’s lights out. I find it fascinating that allllll of a sudden, Tamra is beyond p*ssed at Kelly, alllllll over again, despite the fact that I am pretty sure they’ve made up numerous times this season. Seems to me that Tamra is holding onto a storyline just to stay relevant, amiright?

Naturally, the tres amigas stick together. Shannon is now uber annoyed at Kelly, the enemy. In the midst of the sh*t talking, Shannon’s hair catches fire, and I see that as an omen of things to come. #classic. Sidenote: I think it’s hilarious that Vicki’s brother is all up in the tres amigas’ business.

Tamra can’t take it anymore and jumps up to demand to know “what’s so funny,” as Gina, Emily, Braunwyn, and Kelly have a kick line and laugh. Tamra is next level hostile and Gina tells her she is “overreacting.” Tamra is so annoyed that Gina is seemingly taking Kelly’s side and she straight up tells Gina, “f*ck you” and storms off.

Enter Shannon to fight the fight. It’s laughable how Vicki stands by during HER party listening to this BS unravel. Kelly is baffled by this, as she thought all of the issues were resolved in Florida. When Braunwyn tries to reason with Kelly about the lawsuit, Kelly calls Braunwyn dumb.

Outside of the party, Tamra legit runs away from Gina and hides in the bushes. She screams for Gina to go away, and it seems like she is playing a bad game of hide and seek. The thing is, Gina finds her. Gina has to untangle her from the bush and begs Tamra to simmer down.

Why in the world does Tamra need everyone to take sides? Shannon and Vicki come out to save Tamra and the women just begin shrieking at Gina, “You don’t know.” “You don’t know.” This is bordering a Saturday Night Live skit and I am just as confused about this whole situation as Gina. Kelly has decided to excuse herself from the party, as kindness and peace ain’t quite cutting it this evening.

Kelly explains that she “pities people who try to take her down.” Since filming wrapped, she has stopped dating Dr. Brian and has gotten engaged to Rick Leventhal………..after only three months of dating.

Emily states that Shane has not passed the bar for the THIRD time, therefore, she has time to heal from her hip replacement surgery before turning cartwheels in celebration of him passing.

Tamra has learned to watch her mouth a bit more this season. Her kids are starting to get along, but that lawsuit keeps haunting her.

Braunwyn still hasn’t mended things with Dr. Deb. For her 42nd birthday, all of the housewives were invited, but her mom wasn’t. That speaks volumes, huh?

Gina realizes that she has a lot of strength and is looking forward to her future with Matt…that is until he was arrested for domestic violence. Yikes.

Fun Shannon still wants to lose a bit more weight before she can get serious with a new man…Seems like she is feeling better about herself as she is seeing a new guy named John as of recent.

And Vicki…well, she is just in pre-marital bliss. Wish I could say the same for her fiancé, Steve.

That’s a wrap on this season!