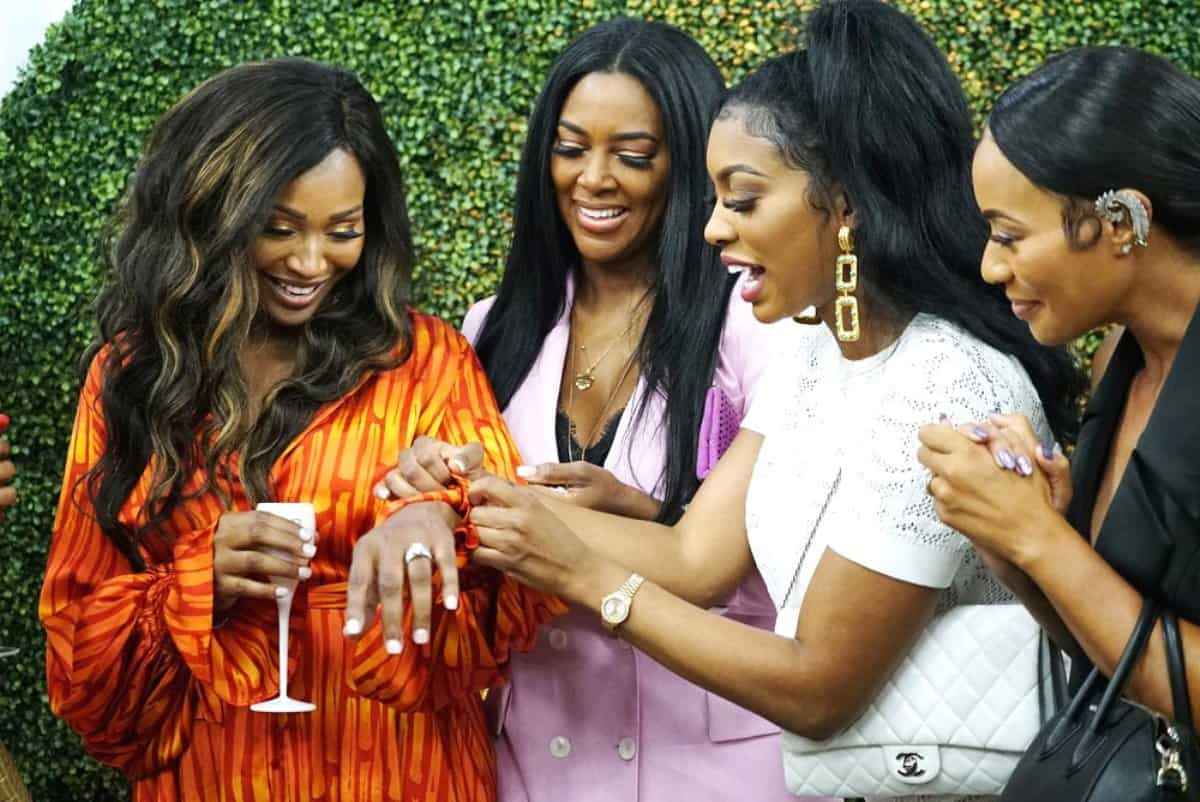 On The Real Housewives of Atlanta this week, we are seeing a surprise engagement and pretty much everyone is dealing with relationship challenges…especially Kenya‘s marriage.

Bravo shows an old black and white movie showing the evolution of Cynthia’s and Mike’s relationship. Two days before the proposal, Mike is ring shopping with Noelle and his daughters Ashlee and Kayla. The girls approve of them as a couple.

Dennis comes over with flowers for Porsha. She has a chef make a birthday cake for Dennis. PJ looks just like Dennis! He is laying on the compliments telling her how good she looks. Porsha says the “cookie jar is closed” so no nookie for Dennis…. although I’m not sure I’m buying it seeing how Porsha’s eyes light up whenever Dennis compliments her!

Marlo and Cynthia meet up for lunch and discuss the “recording” dun, dun, dun… They didn’t get to address it before since Kenya disrespectfully interrupted her wig launch. Marlo thinks Kenya and Cynthia are lovers because she doesn’t understand their relationship. Marlo “claims” she doesn’t want Cynthia to be in a relationship where she can get “punked” because she will save her? Cynthia should never expect a life raft from Marlo — it is guaranteed to have a lot of holes in it!

Cynthia addresses the recording issue with Marlo. Marlo dramatically says “you are bringing a tear to my eye” over the accusation. I think we needed that scene to have background soap opera music playing with that bad acting job. I say boo-hoo to that! We all see you, Marlo Hampton!!! Cynthia is accepting for now that Marlo is telling the truth, and she probably is as I still suspect Yovanna from ‘Clark’ is the one who secretly taped Cynthia!

Todd wants to open up a Mexican restaurant so he can start having Taco Tuesday. Kandi and Todd butt heads over his six businesses that we all know Kandi is bankrolling. She says he has them but still hasn’t done anything with them. What is Todd doing during his free time is a better question??? I bet Mama Joyce has the “word on the streets” about what Todd is doing! Todd needs another $660,000 to get all of his business projects off the ground, and he thinks she is acting like a hater. Kandi is not feeling it and thinks their relationship is all about spending her hard-earned money business and no couple time.

Cynthia is setting up for her “Bailey Wine Cellar” event. Kandi is proud of Cynthia since she follows through on all of her business ventures. I think this might be a dig at her husband. Nene actually sends a suspiciously nice card showing Cynthia support. She is touched by her grand cheese and crackers gesture. Yovanna has to interject herself, acting like she is Nene’s diplomat and making sure Cynthia knows it was a very sincere gesture.

Cynthia is still trying to find out who is behind “snake-gate”. The camera pans around the room showing the usual suspects Yovanna and Marlo. Kenya is telling Cynthia and Kandi that she thinks that Mike Hill is going to be proposing. Kandi gives her serious side-eye over spilling the beans. She thinks she is being a b**** for ruining the surprise. Kandi tells Kenya to keep her big mouth shut when she not so innocently asks if she should confess to Mike. Let’s be clear, Kenya doesn’t feel bad. She is just really jelly and trying to rain on Cynthia’s parade.

Cynthia thinks nothing is going to happen since her mom isn’t there. The producers predictably usher Mama Bailey in to set the scene. Cynthia thanks everyone for coming to her event. Eva gives her a lovely toast and Kenya is shockingly pretty speechless? Mike praises Cynthia for her hard work and then says, “I want to propose…” The daughters bring up a bottle of champagne and ask Mike to pop it. Mike pulls out the ring and tells her he wants her to be his forever. Cynthia is no longer thirsty and she can officially chill.

Kenya and Marc’s car ride on the way to the Marc and Kenya’s Last Supper triple date dinner is tortuously awkward. Marc tells Kenya she snitched to Cynthia and ruined Mike’s surprise. Kenya thinks they are both alphas and putting their positive charges together causes an explosion. Marc can barely conceal his disdain for his wife and it is painful to watch them interact.

All three couples discuss the engagement. Kenya wants to plan the wedding since she planned her wedding. Marc tells the most unromantic story about how he proposed to her. He said, “Look who’s official now“ after presenting the ring to her when she arrived on his doorstep probably to give him an ultimatum in NYC. Marc then shares that they don’t have a prenup and he would never marry anyone with one. Kenya says they discussed it prior and Marc insists there was no discussion. This is the most bizarre relationship with such conflicting descriptions of what has transpired.

Kenya says her winning Miss USA was her most memorable day then followed by marrying Marc? Kandi thinks her priorities are whack. Where is Brooklyn ranked??? Marc claims they are just different. Is that all he thinks is the problem?

Marc is very dismissive to Kenya and he thinks she is too much into “flash.” He doesn’t see the Bentley as a necessary purchase. He just shows zero respect for her opinion by constantly interrupting her and shutting down any comment she would like to make. It is beyond awkward for us as viewers. He is making himself look like a total douche nozzle!! I can’t imagine how uncomfortable Kandi and Cynthia are witnessing this exchange.

Marc actually says he really liked Nene when he met her because she made it a point to introduce her husband to him? Kenya reminds Marc that Nene insulted her appearance when she was pregnant and he should stand by his wife. Kenya makes a toast to the other couples and it is rather bizarre because she is just seriously shading Marc with her toast. Marc just seems totally oblivious to the diss and to his wife as well…

There was no Nene this week except her production influenced note to Cynthia to congratulate her. Did anyone seem to miss her?

Next week, we go to Toronto Carnival and Nene actually shows up! The poor cameramen and Bravo security team are earning their checks since they are in the line of fire because these crazy ladies are brawling again…