Home Real Housewives of Atlanta News RHOA Recap: Kenya and Nene Almost Come to Blows as Yovanna is Revealed as the Snake

RHOA Recap: Kenya and Nene Almost Come to Blows as Yovanna is Revealed as the Snake 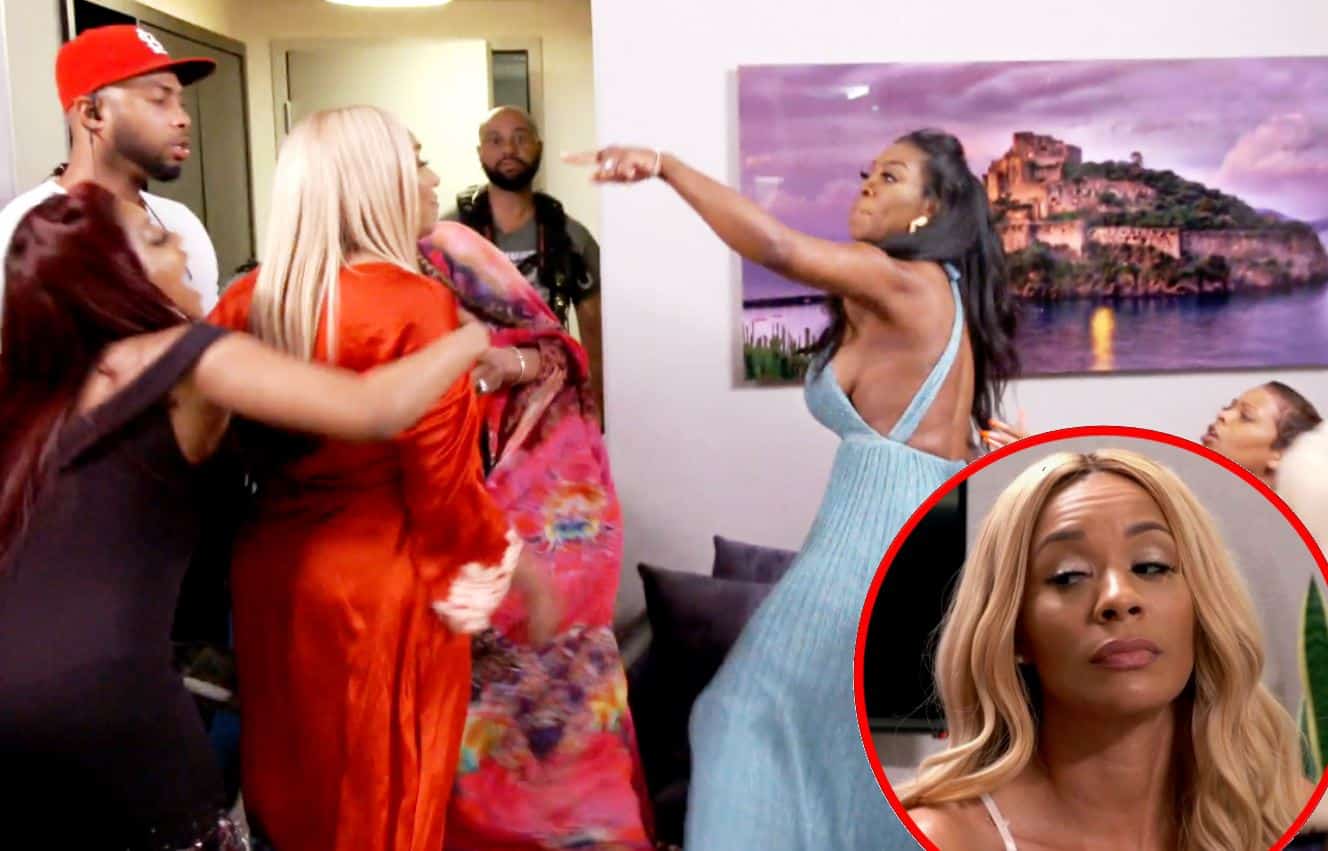 On The Real Housewives of Atlanta this week, the ‘Snake’ is finally revealed, but not before Nene and Kenya almost come to blows!

We begin this episode with Dennis attempting to be sincere about trying to win Porsha back. He goes down on one knee to put a ring back on it. He says, “I almost lost my family for being selfish.” Hmm, actually it was because you couldn’t keep your hot dog to yourself.  Kandi is all of us as she is simply not feeling it. She doubts his sincerity and rightfully so. Porsha is open to having some penis again, but she will have to wait for it since Dennis is going back home I am sure now she wishes she didn’t fall for this charade.

While the ladies are on the bus, it is obvious that they have all been overserved as all of their boobs are falling out of their dresses in this episode. Poor Eva keeps getting flashed! Kenya is poking the bear (Porsha) about Dennis. Porsha is falling for Dennis’s grand gesture of apologizing, but still, she wants to revisit Snake-Gate when they return to the hotel. I see danger, girl!

The ladies have a “Get to the bottom of the sh** party,” and I have to comment on Marlo’s outfit. What is that netted jumpsuit with flip flops? Can someone please explain to me what exactly is she wearing? There are crickets when Yovanna comes in because they all suspect she is the snake.  Yovanna is all “faux innocent,” saying, “What does it have to do with me?”

Nene then walks in the room and her boobs are falling out of her robe. She only has nipple covers on. Eva has had enough of seeing everyone’s titties and just wants to exit this crazy scene. Pre-board that plane, Eva! Nene tries very poorly to explain there is a difference between an audio and a recording. I can’t even follow her train of thought on this one.

Cynthia is getting into it with Marlo over the audio recording. Nene thinks “50 Cynt” is coming out when Marlo calls Cynthia insecure. Nene admits in her talking head that Yovanna is the snake, duh. When Porsha tries to pull the truth out of Yovanna, she says, “The snake is your man!” Oh-no-she-didn’t! I think we just saw Porsha’s anger management training go out the window! It is pretty messed up that the pregnant lady, Eva, has to jump in the middle of them!

Marlo is igniting Porsha’s fuse by shouting out that Dennis has an, um, “fetish” with animals. It is almost like everyone was holding back for this night to spew the meanest sh** they can come up with about each other. Yovanna, Nene, and Marlo definitely had a pact to make this night as messy as possible.

Cynthia runs down the hallway, and Nene brings her back with Marlo, calling her a “bald-headed scallywag?” Nene doesn’t want to give her a heads up about snake-gate because she feels Cynthia didn’t have her back. Yovanna is hurling insults about Dennis, and Porsha is losing her mind and her restraint. There are so many fights going on in this scene, they need three security people to stand by. Nene and Kenya have to be split up because they are fighting for the head bit** in charge title.

In the morning, Nene goes to Tanya’s room to discuss the insanity. She is, of course, leaving after stirring the pot .  She puts a spin on her narrative, of course, to make herself look all innocent and contrite.  The snake, Yovanna, is finally slithering out of the hotel. Thank you, Jesus! So Nene, Eva, and Yoyo have now left the premises.

Tanya, Cynthia, Kandi, Marlo, Kenya, and Porsha are all glammed up in their Carnival costumes. I wish I had their confidence to wear those sexy costumes! Watch out! Porsha is already breaking out the Hennesey! Cynthia is still peeved over what Marlo said last night.

During Carnival, there is lots of dancing, grinding, twerking, and whining. No dancing for Kandi, though! She knows her limitations! Tanya has some game, for sure. She gets into the groove big time! They all seem to have a great time showing their assets off.

Kenya and Cynthia discuss last night. Kenya refers to herself as Baby Simba and Nene is the wildebeest? I think it is more Scar (Kenya) and the hyena (Nene) from The Lion King! Cynthia is really upset with Marlo, and that is why expletives were rapidly firing out of her mouth and 50 Cent emerged! She thinks Nene encouraged Marlo to attack her. The ladies head back to the hotel to meet up later for dinner.

Tanya, Kenya, Cynthia, and Kandi are at dinner, and Kandi thinks everyone tried to recreate the crazy pajama party from years past. Cue the footage from that crazy party! Tanya fills the ladies in on what Nene said about what transpired last night.

The vibe shifts when the negative energy of Marlo comes to the table. Porsha walks in when Marlo is trying to make nice with Cynthia. I just can’t take Marlo seriously with those Elton John glasses! They FINALLY put snake-gate to bed.

They discuss Dennis surprising Porsha and wedding plans for Cynthia, Tanya, and Porsha. Marlo questions Tanya about where her relationship is at the moment. Tanya says her relationship is perfect, and you know happiness can bring out the claws in these ladies. Kenya, of course, has to go in for the kill. She claims she is going to be the devil’s advocate and talks about cheating.

Kenya does this whole hypothetical question to the group. “Who would want to know if their man was cheating?” Cynthia in her ITM knows what direction Kenya is heading in, and poor Tanya is the target. Paul, Tayna’s fiancé, has been ALLEGEDLY hitting on the “cookie lady.” Since Kenya is rolling around in her own mess of a relationship, she wants to bring Tanya down to her level of dysfunction. Kenya, this is so messy and frankly just plain mean since Tanya is one of the nicest people on this show. She is actually too good of a person to be involved with the likes of some of these cast members.

Poor Tanya is totally unaware that Kenya was talking about Paul. Tanya thinks “hitting on” is not cheating. Not sure if I agree with you on that one, Tanya. Tanya says she would be broken up if Paul had cheated on her. In her ITM, Kenya claims it was a loaded question but she didn’t plan on firing the gun. She claims Marc told her regarding a cheater, “Once a cheater, always a cheater.” Marc Daly would know!

Next week, Dennis is clearing the air with Porsha’s family and Tanya is going to air a dirty little secret about Kenya… Tit for Tat!