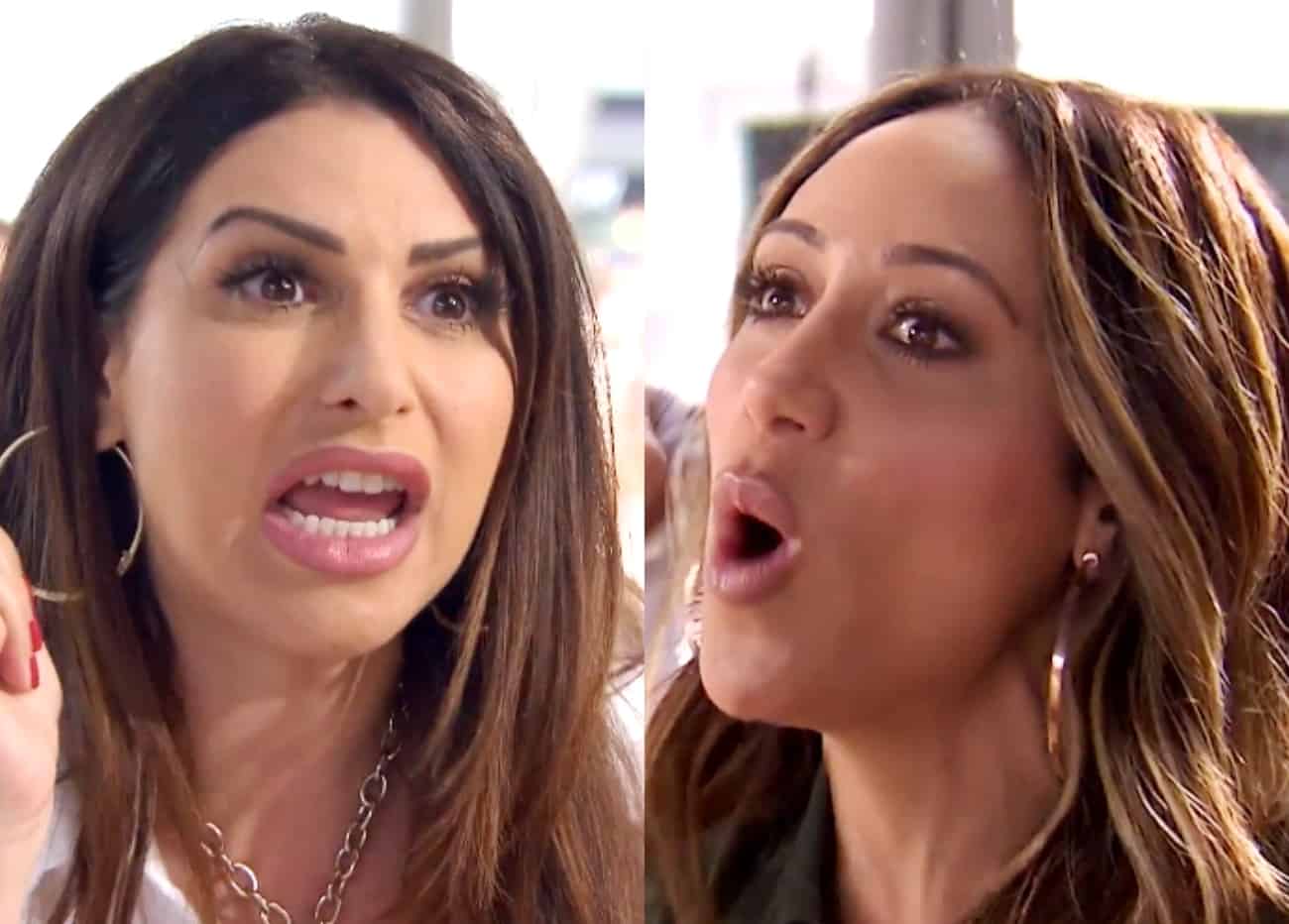 On this week’s episode of The Real Housewives of New Jersey, Margaret and Teresa are still bickering over the brunch. Margaret is not going to engage with her right now. Melissa is going to just break out the wine. Booze and bad tempers just don’t mix well.

Jackie shows the ladies the house, which is absolutely beautiful. Teresa, of course, wants the best room with the balcony. Margaret and Teresa both discuss their feud with the other ladies.

Margaret tries to make nice with Teresa. She says that Teresa chased after Danielle after she had assaulted her. Did Teresa just say she didn’t know who Charles Manson is? Does she live under a really gaudy rock? Keep it simple, stupid! Maybe they should use flashcards to illustrate their points? Margaret repeats all of the vile comments Danielle made about her. When confronted about her hypocrisy, Teresa has to leave the room in a huff.

The ladies head to their rooms to get all glammed up for dinner. Jackie tries to tell Margaret she isn’t going to be able to reason with Teresa . Jennifer brags about all of her Chanel stuff. She is such a label whore. Dolores talks to her son Frankie, and he shares that he is going to prom with Gia. Jennifer has to, of course, find the Patron. They all do shots of Patron before heading to Bridgehampton.

In the car, Teresa can’t come up with the poem about friendships. She TRIES to articulate where Margaret falls in the friend category. She butchers the saying for three types of friends, “Friends for a reason, friends for a season, and friends for a lifetime.” Margaret feels she is just a seasonal friend to Teresa.

Teresa discusses changing her eating habits and how Milania has done the same. She has really grown up and looks good. Joe Giudice calls Teresa and asks to speak to Dolores. He wants her to hook Teresa up with a doctor friend of David. Joe tells Teresa she has a lot of baggage. “Who is going to want her?” How sweet, these terms of endearment.

Margaret decides to let it go about Danielle since Teresa has enough on her plate. Melissa asks Teresa if she didn’t have four kids, would she still hang around for Joe? Teresa mentions she was a buyer at Macy’s and made a lot of money. Hmm, sure you did. She really signed a prenup to protect her minimum wage job. Okay, keep telling that fiction to yourself!

Margaret thinks Jackie’s panties should be moist since she has “family money.” Okay, I get it would be exciting to have a lot of money, but not sexually stimulating! Jennifer questions Jackie about her investments and real estate. I agree with Melissa — she is exactly like Veruca Salt from Charlie and the Chocolate Factory. I want it now!!!

Jennifer is asking rapid-fire questions regarding Jackie’s finances. She claims in Middle Eastern culture it is acceptable to be obnoxious about money? Jennifer thinks the men should be smarter than women. Huh? Maybe it is because the dumb ones don’t make as much money as Bill?

Jackie calls Evan and shares how rude Jennifer is with her inquiries. He concurs. Evan just asks her to not drown anyone in the water! Jennifer shoots a video of Jackie’s house to share with Bill. She is extremely jelly and claims Bill will buy her one too. She wants to find a realtor. Get over yourself, Jennifer! Let Jackie win the real estate challenge!

Melissa makes breakfast for everyone except Jackie since Margaret says she never eats. There is again another food dig .

The ladies, minus Teresa, discuss the dynamic between Joe and Teresa. Production shows clips again illustrating Joe’s disrespectful comments. Dolores thinks that how Joe spoke to Teresa is a way of talking? Dolores is really part of the problem if she can justify this is how it is done. She says with age you tend to get over it. She thinks that after putting up with Joe all of those years, Teresa isn’t going to take that verbal abuse anymore. It’s about time she grew a set of balls.

The ladies go shopping — like they really need anything. I really don’t care for some of the clothes or shoes they buy. Margaret and Jennifer go to a home store. She wants to shop for her hoarder mom. Purge, Marge Sr.! Don’t shop till you drop for a hoarder!

Jennifer claims she was inquisitive because she is intrigued. Yeah, right. Jennifer also says, “I don’t put a monetary value on things.” I just can’t with her hypocrisy. Jennifer basically is saying Jackie is “cheap” and “stingy” since she doesn’t spend an exorbitant amount of money on kids’ birthday parties. Okay, not in agreement with that mentality. Kids’ parties should not be about how much cash you spend. If your kids have fun that is all that matters. She thinks her parties are the “event of the season.” She thinks more $$$ translates to better parenting?

The ladies discuss Jennifer’s obsession with money. They think it is not a big deal since she is charitable. Melissa thinks she is hyper-focused on it because it is “new money.” She could be right about that. Jennifer cares way too much about appearances and labels.

Jackie’s eating habits are mentioned a few times in this episode. It is most definitely producer-driven since it comes mostly from Margaret. Do you really think she cares about what she eats? Margaret tells Jackie how Jennifer criticized her party planning or lack thereof.

Maybe Jackie wouldn’t be condescending if Jennifer would stop flapping her nasty gums. Jackie gives her the eye-roll. She can’t believe she has to deal with this pretentious fool to be on this show. Jennifer is on a roll of nasty comments about Jackie not flaunting her money. Jennifer says, “Your demeanor with me is repulsive.”

Jackie’s mothering skills and her Amazon box of goody bags are called into question. Jackie says, “The way you spend money, Jen, makes me vomit in my mouth.” You can see Jackie is getting fired up over this crap. Then, to further muddy the waters, Jennifer shares Margaret mentioned her lack of eating, again.

Melissa tries to make a point that Jackie has money because she is a saver. Her kids will be set for life because of her wise decisions regarding money. That triggers Jennifer once again since now she thinks that is a dig at her brilliant little angels.

Melissa tries to shut it down, but the fire has been started. She tells Melissa, “Don’t tell me to shut up or call me a bitch.” I didn’t hear her say that? She throws utensils at her while yelling like a banshee, “Hello, Hello!” Melissa tells Jennifer to walk away before she clocks her for throwing utensils at her.

Hopefully, they don’t have sharp knives at the table. We then have a “to be continued” to witness this public insanity. We won’t see the aftermath of this disaster until the next episode…