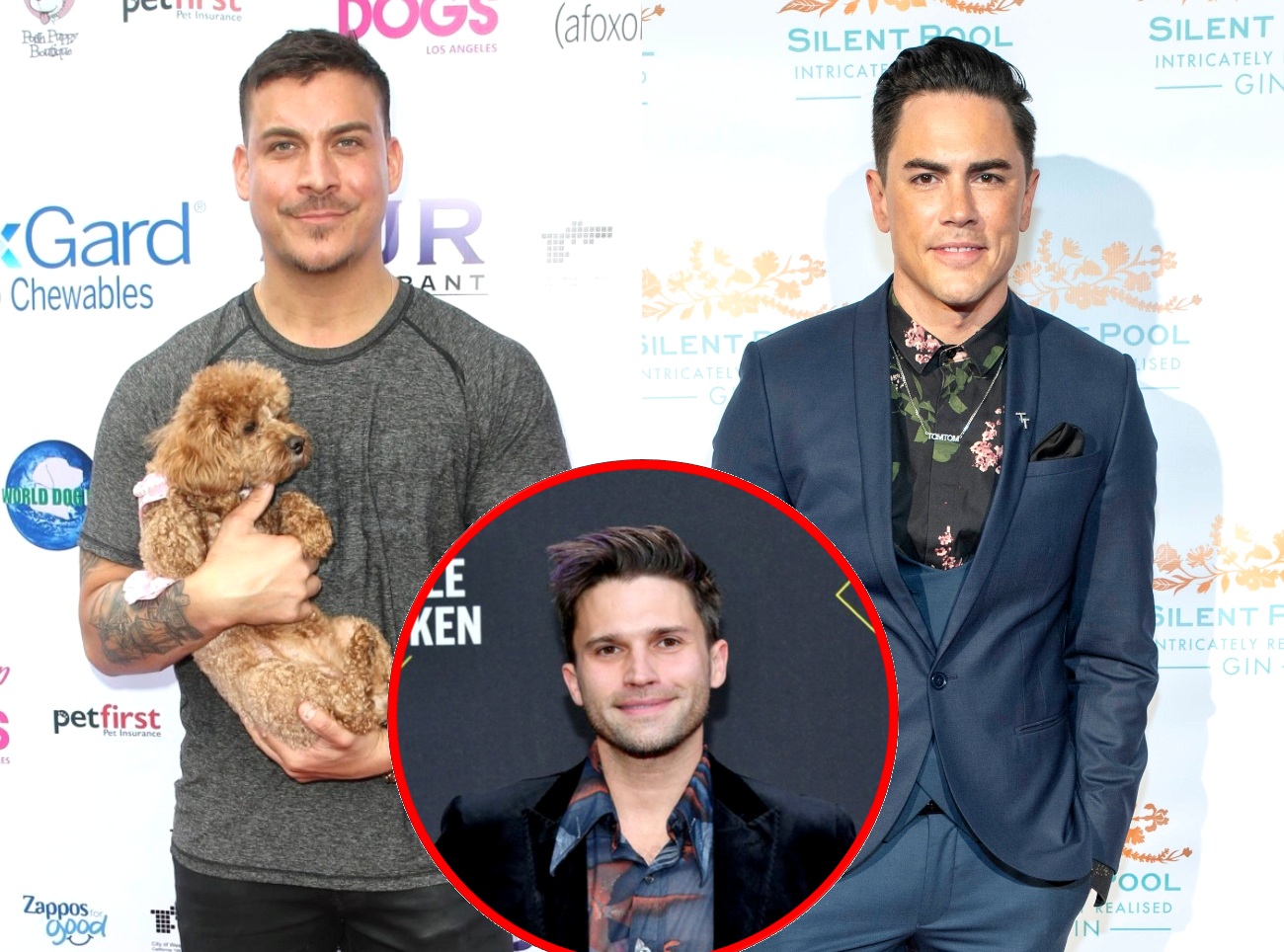 Vanderpump Rules star Jax Taylor completely slammed his friend and co-star Tom Sandoval in a series of brutal tweets as he accused Sandoval of only doing nice things to “look good on TV,” implied he’s a bad friend, trivialized his ownership of TomTom, and poked fun at some of TomTom’s negative Yelp reviews.

Tensions between Jax and Tom came to a head at Peter Madrigal’s birthday party on Tuesday night’s episode as the two fought over the pastor who Jax and Brittany Cartwright originally chose to officiate their wedding. Tom said he wanted to get an explanation as to why Jax and Brittany seemingly ignored the pastor’s anti-LGBTQ comments on social media until Lisa Vanderpump intervened.

Jax took to Twitter on February 19 to address the drama with his friend and co-star and he had, well, a lot to say. First, Jax accused Sandoval of purposely waiting until the cameras were around during Peter’s party to confront him about his pastor.

“Hey let’s wait till we have a party for poor Peter who just wants to have a good time, and the cameras are up to bring this up… you had all day to talk to me about this. Purely ruined the party so you could get attention in my opinion,” tweeted Jax.

Then, Jax accused Sandoval of simply doing “things for tv so he looks good” as he basically implied Sandoval’s concerns were not genuine. 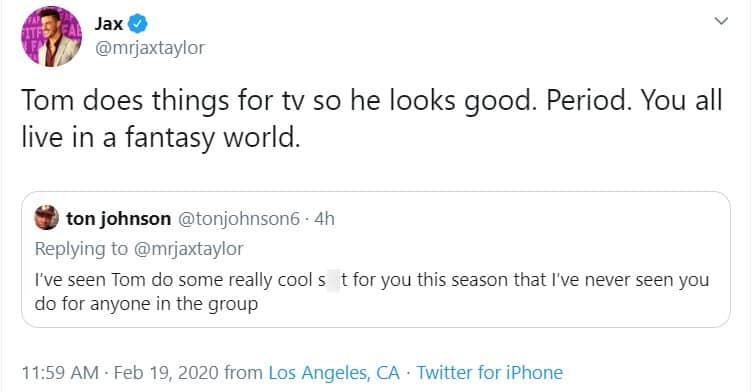 Jax wasn’t done yet. After a fan tweeted to him that perhaps Sandoval should worry about the “horrendous (yet hilaaaarious) Yelp reviews for TomTom and stop crying about everyone else’s lives,” he retweeted the comment and responded with a laughing emoji.

Even more, Jax also took a shot at Sandoval’s ownership of TomTom as he implied Sandoval is not a real owner. As most Pump Rules fans are aware, Sandoval and Tom Schwartz each have a 5% ownership in the restaurant owned by Lisa.

“It’s an absolute joke. He doesn’t even own s–t, Lisa and Ken make the decisions,” tweeted Jax. 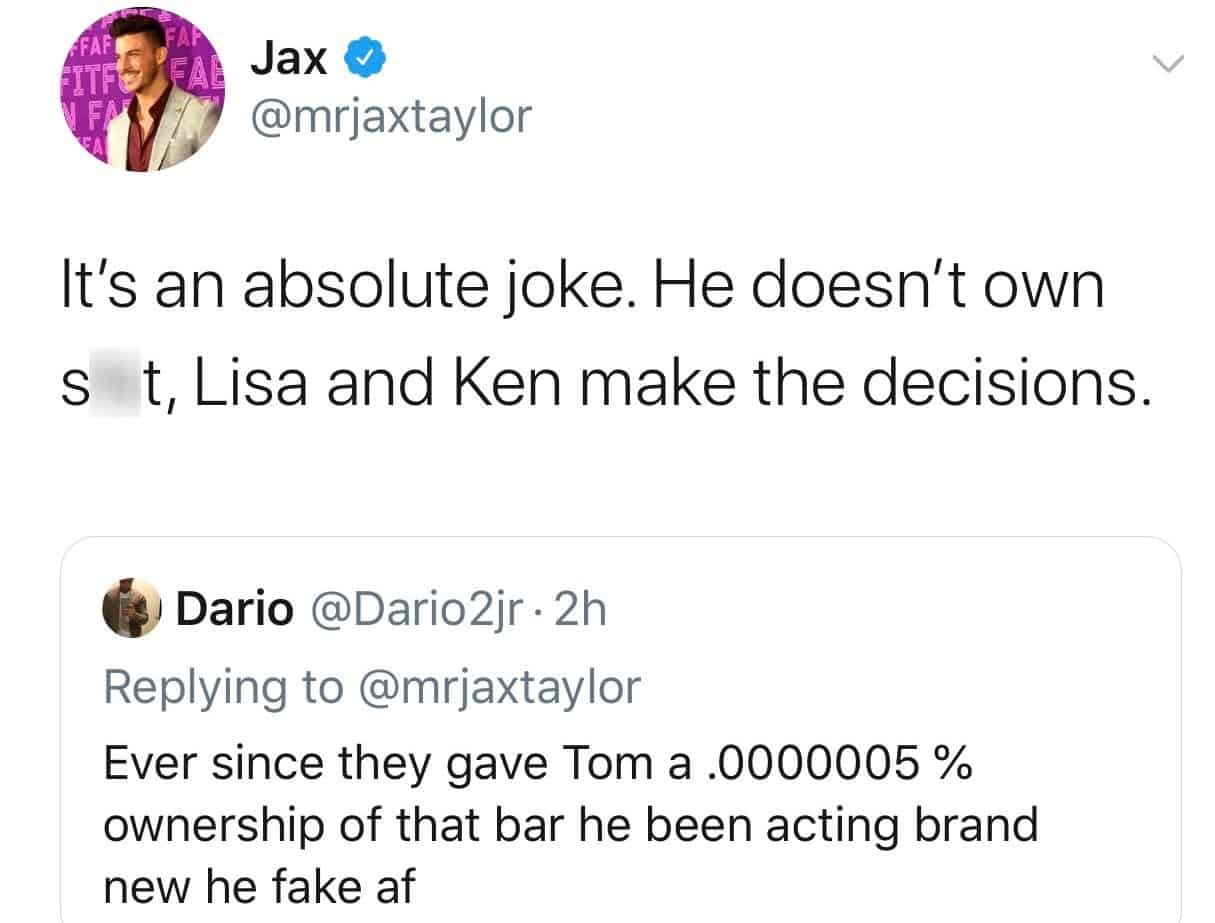 Last but not least, Jax also called out Sandoval and accused him of mistreating his best friend and business partner, Schwartz.

“A good friend/business partner? He constantly belittles Tom Schwartz and puts him down regarding his home, his marriage, how he handles business, but yeah he’s a good friend? Are we watching the same show?” wrote Jax. 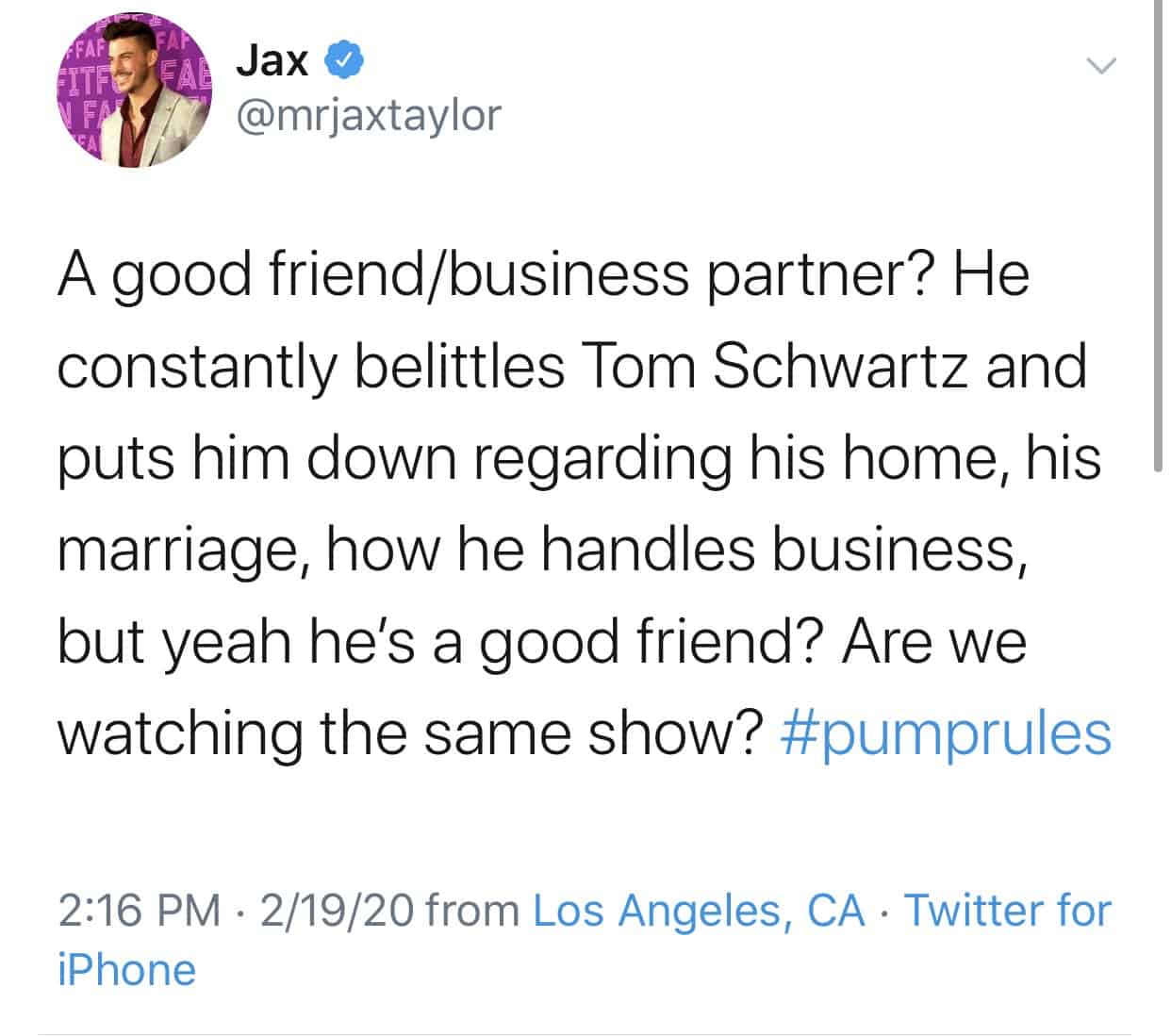 Will the two ever reconcile? Tom hasn’t responded on social media, so perhaps we’ll have to wait until the reunion to see how they’ll handle this newfound drama.