Vanderpump Rules Recap: Jax and Brittany Explode on Tom After He Questions Them About Their Controversial Pastor 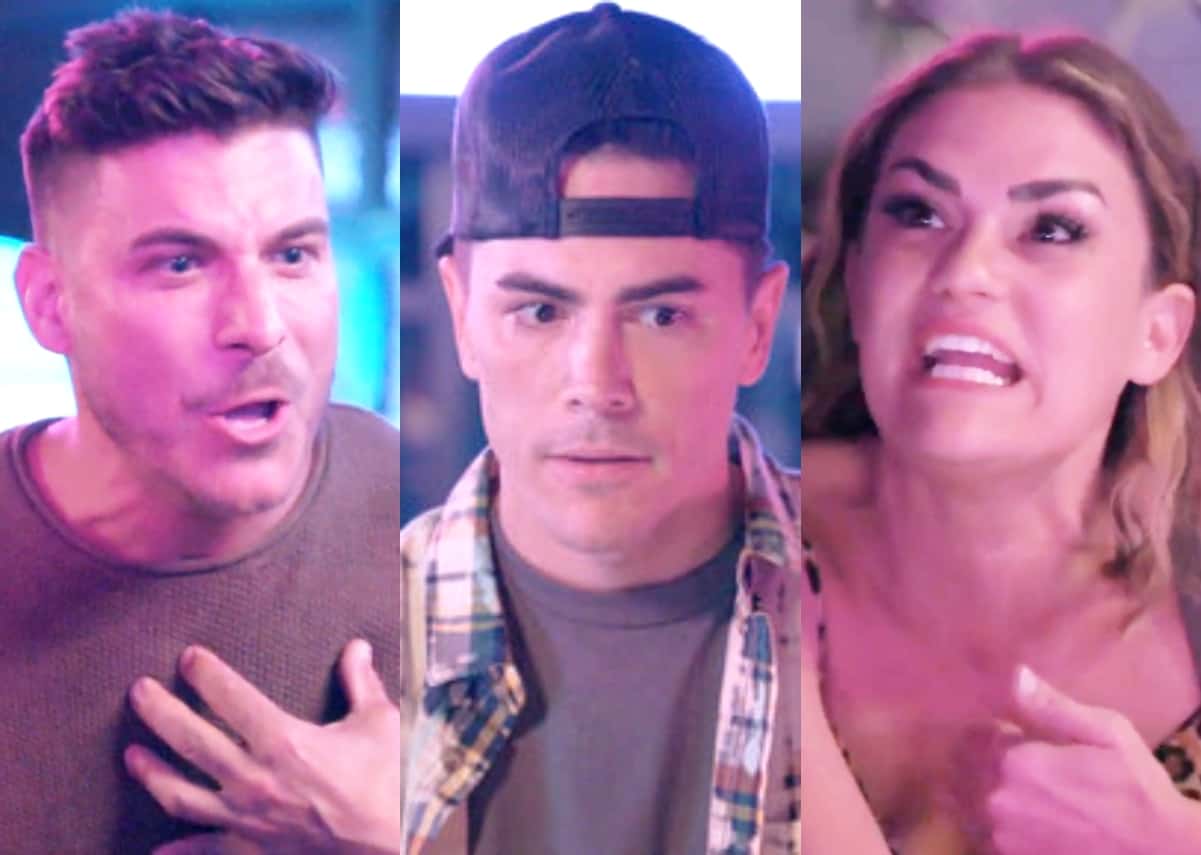 On this episode of  Vanderpump Rules, asking questions gets one best man in some serious hot water.

After a three-month hiatus, Ariana saunters into SUR. LVP has given Ariana the opportunity to bartend here and there in an attempt to help her get out of her depression. Dayna comes by to say what’s up to her fellow bi-sister as we find out that she, like Ariana, celebrated her first Pride parade as an outted bisexual woman.

Interesting timeline of events considering they were just discussing Pride. It has surfaced that the pastor who is marrying Jax and Brittany has made some seriously offensive and terrible remarks about immigrants and the LGBTQ community. Turns out, this guy that Jax and Brittany hired has some very strong opinions and beliefs. LVP has to break the news to the soon-to-be-Mr.-and-Mrs., but it isn’t the first time Jax and Brittany have had to defend their pastor. He’s been stating his opinions for quite some time now, but Jax and Brittany have pretended not to know that fact.

“Chef-Beau-Ar-Dee” and Stassi are busy filming their cooking videos when LaLa stops by. LaLa likes to call Beau a housewife. To be honest, he is closer to a housewife than some of the ladies are on that franchise. Ha! It seems like everyone is talking about the pastor’s posts. LaLa and Stassi discuss it, and when LVP pays a visit to SUR and checks on Ariana, who is busy bartending, Ariana tentatively brings up the subject.

Everyone seems to be in agreement: the pastor has got to go. Juuust have to get Jax and Brittany on board. Essentially, Stassi nicely states that Jax and Brittany are not the sharpest crayons in the box, but it is clear that this pastor needs to be fired ASAP.

How dare Jax and Brittany attend a fitness class NOT taught by personal trainer Brett? Post workout, the couple discusses the new drama about their pastor. Brittany claims she had NO idea about his beliefs, even though everyone is calling BS. Jax blames social media, and listening to them talk out the issue at hand is making me question their shared brain power.

Raquel is in the hot seat with LVP. She comes clean about why she missed her shift at SUR and explains that she essentially needed to babysit James while he DJed at TomTom. Raquel begs LVP not to fire her and promises to never let her boss down again. She should quit hanging out with James…he’s bringing her down.

Later, Sandoval brings Ariana sushi in bed and they talk about the controversial pastor. Ariana explains that she feels angry that Jax and Brittany aren’t really acting on these posts and wishes they shut it down back in January at the first sign of trouble in the posts.

Max and Dayna have been dating for about a month now and Dayna 1,000% thinks they are gonna get married. They flirt whilst drinking wine and Dayna takes the relationship by the horns. She straight up asks Max where he is at and they decide that they are going to be exclusive. Woop-dee-doo.

It’s the day of Brittany’s bridal shower and Katie is hosting. Adult AF. On the opposite “adult” spectrum, I give you Raquel and James. Raquel talks about James’ unpredictable moods and essentially explains that he is a maniac. James yells at Raquel for leaving her shift, yet yelled at her for alllllllllllmost missing his DJ gig. I can’t keep up. He becomes even more angry upon hearing that Raquel was invited to Peter’s birthday party but James was not. He is a salty teenager and questions Raquel’s decisions about their relationship.

Back at the bridal shower set-up, LaLa and Ariana go back and forth about whether they should say something to Brittany about her pastor. Although Jax and Brittany have fired the pastor with only like…two weeks to go… things are still a little bit awkward. Guests begin arriving and princesses come donning their crowns all for the bride-to-be. It’s basically the pink-est, most princess-y event I have seen in awhile. LVP is so proud. When Brittany talks about the firing of the family-friend pastor to LVP, it seems as though everything is settling into place.

Over at TomTom, James comes collecting his check from his Pride set. Sandoval can’t seem to understand why James is not invited to Peter’s birthday party, as it just makes things uncomfortable. Speaking of uncomfortable, leave it to Kristen to make things awkward between her and Katie at the bridal shower.

So, who needs a pastor when you’ve got LANCE BASS?! Talk about a 90’s girl’s dream! Naturally, not everyone is going to be happy. Take James for instance. He states that Jax and Brittany are now “overcompensating and it took way too long” for them to fire their homophobic pastor. Sandoval still can’t get over Jax’s blind eye to the pastor’s posts and is baffled why it took LVP saying something to finally change the plan.

Happy birthday, Peter! Go have a birthday party where you learn about Scheana freezing her eggs. I bet he wishes he invited James over Scheana. LOL. They are essentially celebrating at an adult-like Fun Time America and it looks awesome.

Could Jax and Brittany BE any more extra? Shania Twain’s “Looks Like We Made It/Still the One” is a *perfect* wedding song for them. How come no one can talk about their messy past, yet they will be dancing to a song that straight up calls out their imperfections? Interesting…

Katie and Stassi are loving chatting with Dayna about Max. They are practically salivating upon hearing about Max and Dayna’s exclusivity and cannot WAIT for Scheana to find out. Typical mean girl move.

Later, Brittany has let social media get the best of her. She is crying because people made mean comments about her bridal shower. In the meantime, Sandoval confronts Jax about why it took LVP saying something about the pastor for things to change. Jax essentially tells Sandoval that topic is off limits now that they’ve hired Lance Bass, but he is still furious that Sandoval would even question him.

Brittany becomes so frustrated with Sandoval and tells him that he’s not a friend. Brittany is yelling that this isn’t their fault and she explains that she chose to believe her family friend pastor for a short time period. LaLa inserts herself into the fight and defends Brittany, which is interesting considering she was just talking mad smack about Jax and Brittany’s choices with Ariana earlier. Sandoval thinks it’s “dangerous” to speak up when he thinks something is wrong. Stassi tells Sandoval he is acting like a martyr and suggests he just be nice to his friends.

Ariana explains that this topic is very sensitive to her as a bisexual woman and Jax tries to defend himself. Jax and Brittany both agree that there is no “coming back” from Sandoval’s questioning and that Sandoval is no longer in the wedding party. I mean, when Brittany says that she is about to knock Tom out and says she also hopes Jax “knocks him the f–k out,” you know it’s pretty serious. Poor Sandoval!