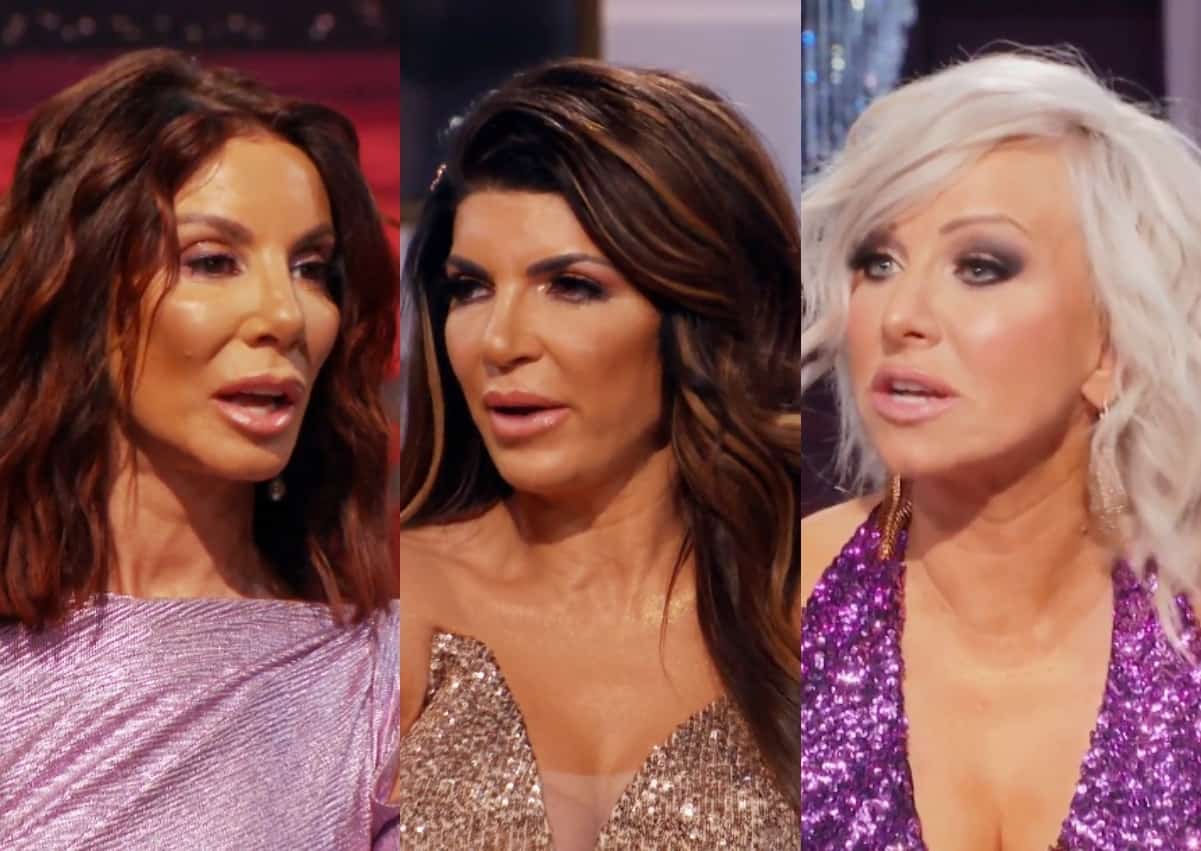 On the last episode of season 10 of The Real Housewives of New Jersey, we are joining the ladies and the seventh housewife, Joe Gorga. Will Danielle get her way and get prime seating? Will Margaret get answers on what was behind the hair pull? We will have to watch and see…

Marty chats with the producer about how Danielle was treated at the last reunion. He thinks she was ganged up on #victim. He thinks they should be ashamed of themselves. I agree with that statement regarding some of them but not for what happened to Danielle. I am looking at Teresa and Jennifer. Danielle is threatening to walk if she can’t sit next to Andy. She is demanding respect since she is an OG. She will walk away if she doesn’t get her way.

Dolores asks Teresa if Joe has been kinder to her since he went to Italy. Teresa says he has “spoken better.” Hmm, that is a big no then. Teresa is asked if Joe has thanked her for paying off his debts. Another big no for that one. She doesn’t think he will go after spousal support. Dream on.

Joe Gorga is unsure about that. Teresa mentions Joe’s family hates her . Joe thinks Joe Guidice is not remorseful over what has transpired. Truth. Teresa is in denial over how Joe behaved. She tries that defense of being an old school Italian.

Teresa doesn’t like the perception that people think she stayed with a cheater. She cares more about how she is perceived by others than Joe’s infidelities. I find her way of thinking to be really bizarre. Teresa claims the “sex on the desk” incident Jacqueline Laurita described was untrue. I would bet money on that one being true.

Joe Gorga believed all of the cheating rumors. I am sorry but this family is beyond dysfunctional. I would think a brother would show more loyalty to his sister than keep your mouth shut over his brother-in-law’s cheating. It is really messed up and explains a lot about this family dynamic.

The group, minus Teresa, think that Joe was acting very arrogant during the WWHL interview. Yep, sure was. Melissa thinks he behaved like a prick in the clip from Italy when he was swilling his wine. Teresa thinks his upbringing is why he behaves the way he does. Please stop blaming everyone else! Own your behavior, and while you are at it own your crimes!

We see flashbacks of Joe’s appeal being denied and being placed in ICE. Teresa thinks he has no chance of getting his appeal. She says Milania and even Gia are the most affected by their dad being out of the picture. Teresa insinuates that the court system is punishing her kids. No, Teresa, you and Joe with your greed put your children through this hot mess. After all of this time, there is still no remorse or accountability from this woman. Wow, speechless.

They discuss Joe maybe relocating to Canada? He would be closer to his family. Doubtful this will ever happen. Canada won’t want him either.

Teresa shares that Joe is on a fishing trip in Mexico. Yeah, we might have seen some photos from that trip of him hanging out with some bikini-clad women. Andy asks, where did the money come from? She says he is working. Doing what is super unclear. Maybe picking up things that fall off trucks, perhaps?

Joe Gorga thinks Joe Guidice will come after Teresa for money. Me too. Teresa shares Joe wanted sex in Italy and she didn’t. She said poor Audriana was a co**blocker by sleeping with her. That is messed up using your youngest child to block your husband’s advances. YUCK.

Teresa claims her feelings changed for Joe when her mom passed away. Joe thinks that their mom’s death had a lot to do with the stress from Teresa going to prison. He hints that there is more to the story but won’t elaborate. You know all about their thick as thieves mantra.

Joe wants her to get the divorce finalized since he thinks it’s time. Dolores wants Teresa to let someone else do the dirty work and close this chapter of their marriage down.

On a side note: Jennifer is mysteriously quiet in this episode. I am loving whoever told her to shut it.

Andy gets the news from the control room that Danielle is being a diva. She won’t come out unless she gets VIP seating. Screw her, let her stay backstage!

Andy visits Danielle in her dressing room. Danielle claims she won’t be heard over the trout mouth. I find that ironic since she now has a trout mouth herself! Andy says he can’t put her near Teresa or Margaret for obvious reasons. He assures her he will allow her to speak. Andy leaves it up to her to decide. IMO she won’t miss the opportunity for her screen time AND $$. He prepares the other ladies and advises them to allow her to speak.

Marty tells Danielle to go and kick some a**.  It is really freaky how Danielle is lurking backstage listening to what is said. I didn’t think she could have done more to her face but she has proven me wrong.

Teresa defends Danielle because she was there when her mom died. She hasn’t spoken to Danielle since the Jersey Shore. Fake friends.

Danielle comes out in her purple pageant wear. The lighting in this place is really not flattering . Danielle is working on a cooking channel. Her cooking and bedroom skills must be why she keeps collecting victims! When questions are asked about her house she claims she gave Marty a partial deposit for the home.

Andy asks about Oliver and her engagement. She says he was sick and that is why the engagement is off. Damn! The poor guy dodged a bullet by putting himself in rehab!

Andy asks about the dysfunctional relationship with Marty. Production shows all of the clips illustrating this train wreck of a relationship. Danielle claims they are just really good friends .

Danielle will not talk about the abuse allegations with Marty. She says Margaret is the cause of her divorce. There is a disagreement between Margaret and Danielle over the meddling after her divorce. Danielle says she resigned .  Margaret will never be an OG since Danielle was there for the beginning.  Margaret calls her the original granny. Lol!

Andy asks Teresa if she regrets defending Danielle over the past season. Teresa hems and haws over that one. She says Danielle’s actions proved all of the ladies were right about her. We see clips again of that dreaded hair pull and Teresa’s tantrum when she was busted.

Danielle says Margaret should have watched her actions around her. She says Margaret knew what triggered her — specifically, calling her Beverly or prostitution whore. Danielle feels no remorse over what she did to Margaret.

Teresa says “she made a bad judgment call” when she encouraged Danielle to pull Margaret’s ponytail. She claims she loves Margaret — yeah, sure you do. Jacqueline Laurita tweeted a question about the hypocrisy over the hair pull when Danielle sued Ashley. Danielle thinks she was an innocent person minding her own business when Ashley did it to her. She thinks Margaret deserved her pony being jerked.

Teresa says she didn’t see the hair pull until she watched it on TV. She was in the ROOM — how did she not see the violent way Danielle dragged her across the room? Teresa says, “I would have not supported her if I had seen that.” I guess she is not only dumb but blind too.

Margaret feels like Teresa really upset her since she didn’t have her back all season. Teresa blames being wasted for standing by Danielle?

Teresa ended her relationship since Danielle ratted her out. Danielle disagrees with the statement “ratting her out.” She thinks it means that you get arrested and go to prison when you rat someone out. Wow, she is using her gangster knowledge with that one!

Teresa questions Danielle’s loyalty since she broke her trust. Margaret can’t believe Teresa didn’t reach out after seeing the episodes. Teresa CLAIMS she wanted to apologize in person. Teresa waddles over to awkwardly hug Margaret and kinda sorta apologizes. Danielle looks repulsed seeing this. I honestly might have thrown up in my mouth if I had been there.

Teresa FINALLY says, “I am not perfect.” I had to rewind my DVR to make sure I heard her admit her countless imperfections. Teresa is definitely getting a pass on the hair pull. No accountability again.

Andy allows Danielle to give her final goodbye to her fans? Who are these people? She sees herself as a representative for those who have been bullied or harassed. She wants to use her platform to help others.

Andy wishes her well and she says she will possibly be back. UGH, I was so hoping this was the last time I had to see that face .

There is a montage of some of the finer moments from the RHONJ. I can’t believe how some of their faces have changed over time. Please, Bravo, no more Siggy clips!

Andy asks that each lady contribute something to the time capsule to celebrate their show’s 10 year anniversary. Dolores puts in an Ex-without the Sex book. Jennifer brings her “sorry not sorry” shirt. Margaret drops in her signature pigtails. Jackie brings doughnuts since they don’t think she eats. Melissa deposits note cards with some Jersey lingo. Teresa brings her family portrait that was filmed on the show with her mom in it. Now, I approve of that one.

The ladies toast to family and New Jersey. We say goodbye to season 10 of the Real Housewives of New Jersey! Stay safe, everyone, and I will see you next season!