Home Vanderpump Rules Vanderpump Rules’ Stassi Schroeder and Kristen Doute Get Into Twitter War After Kristen Disses Stassi’s Podcast as Stassi Slams Kristen’s “Half A** Apology,” Plus Why Stassi’s “Embarrassed”

Vanderpump Rules’ Stassi Schroeder and Kristen Doute Get Into Twitter War After Kristen Disses Stassi’s Podcast as Stassi Slams Kristen’s “Half A** Apology,” Plus Why Stassi’s “Embarrassed” 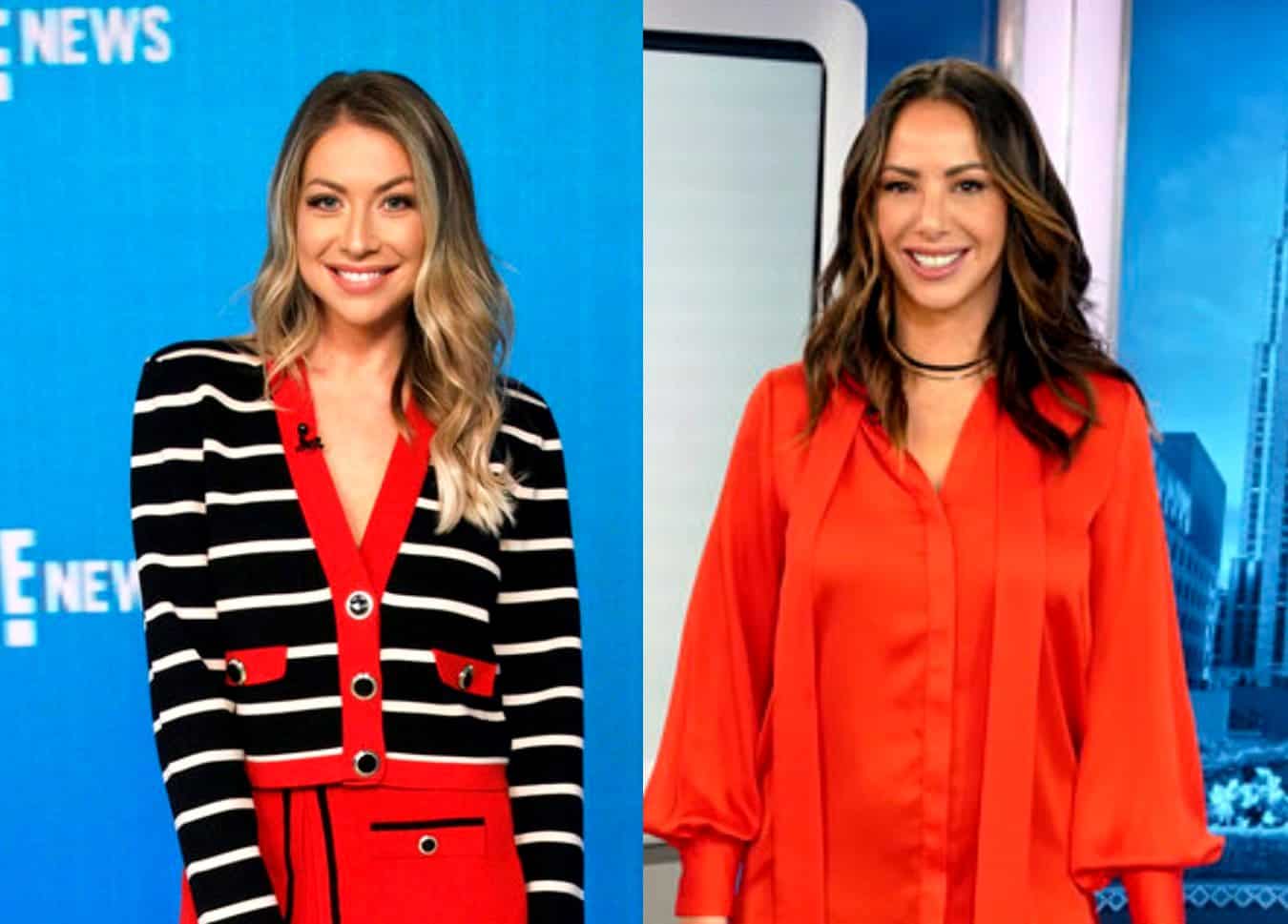 Kristen Doute and Stassi Schroeder got into a Twitter feud on Wednesday after Stassi caught wind of the comments Kristen made during Tuesday’s Vanderpump Rules: After Show.

After Kristen told producers that Stassi “literally [does] nothing” and warned that fans will one day not care about her podcast, the Vanderpump Rules cast member apologized for questioning Stassi’s work ethic. Unfortunately, after she then said she wasn’t above apologizing, Stassi called her out for her mean statements and slammed her “half a** apology.”

“I just watched a [Vanderpump Rules: After Show] where it feels like I was insulting [Stassi Schroeder]’s work ethic. I [100 percent] think Stass has built a brand for herself and I’ve always been proud of her. I was angry about the wine company at that time and I want to publicly correct my opinion,” Kristen tweeted.

Then, after a fan suggested that Stassi and [Katie Maloney] had taken aim at her work ethic in the past, Kristen appeared to suggest that she would apologize for her statements, even though her co-stars would not.

“I’m not above apologizing or explaining my feelings. I don’t want my opinions to be misconstrued,” she explained. 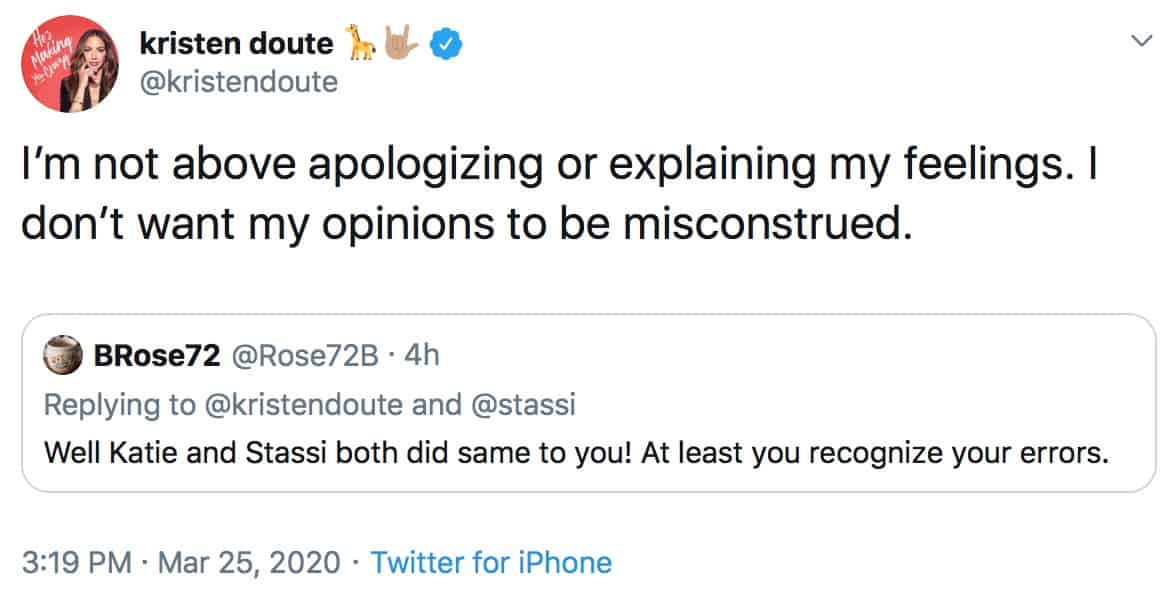 “I’ve never once said a word about the things [Kristen Doute] work on,” Stassi tweeted. “Cool, that you’re ‘not apologizing’ for making fun of my podcast/how I’m probably going to come crashing down/that no one will want to listen to it when I’m 40.” 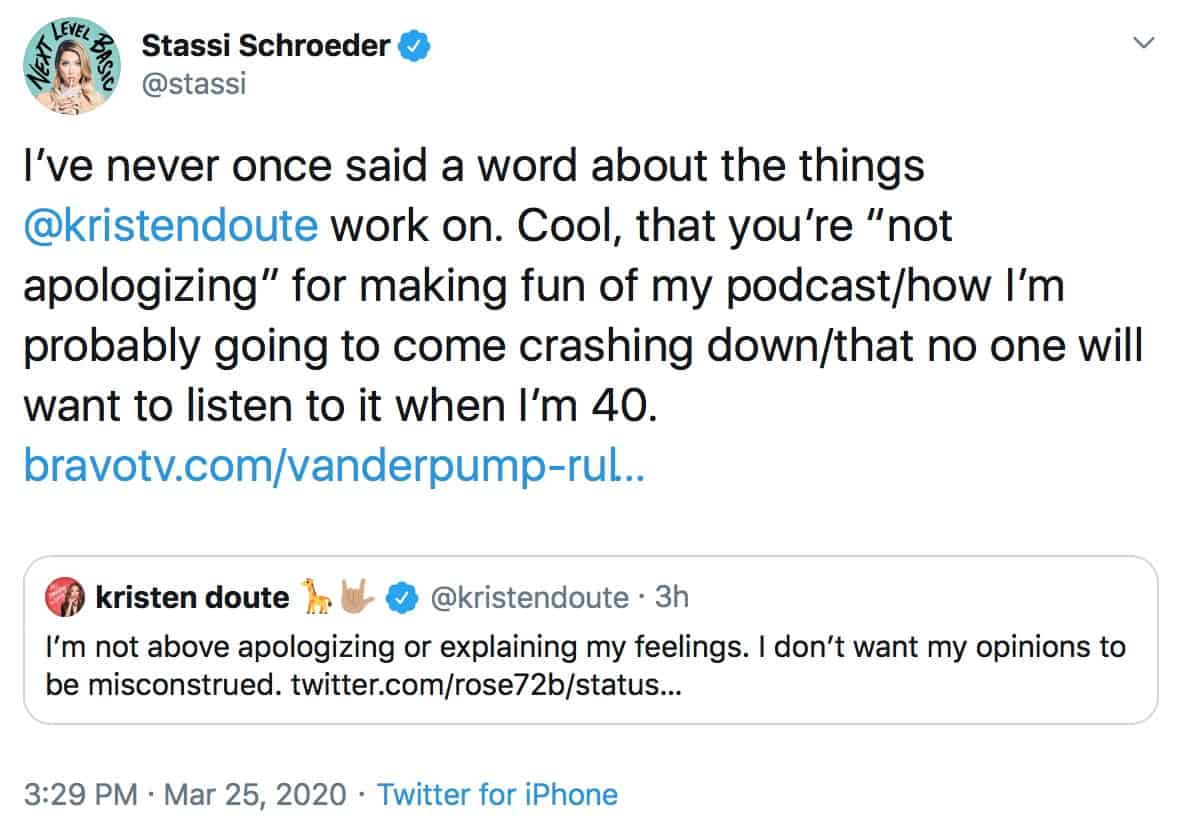 After seeing that Stassi had fired back, Kristen revealed that her comments came as a surprise because the two of them had already spoken about the matter through texts.

“And now you’re just attempting to trash me publicly after we’ve been texting about this for the past hour,” Kristen replied. 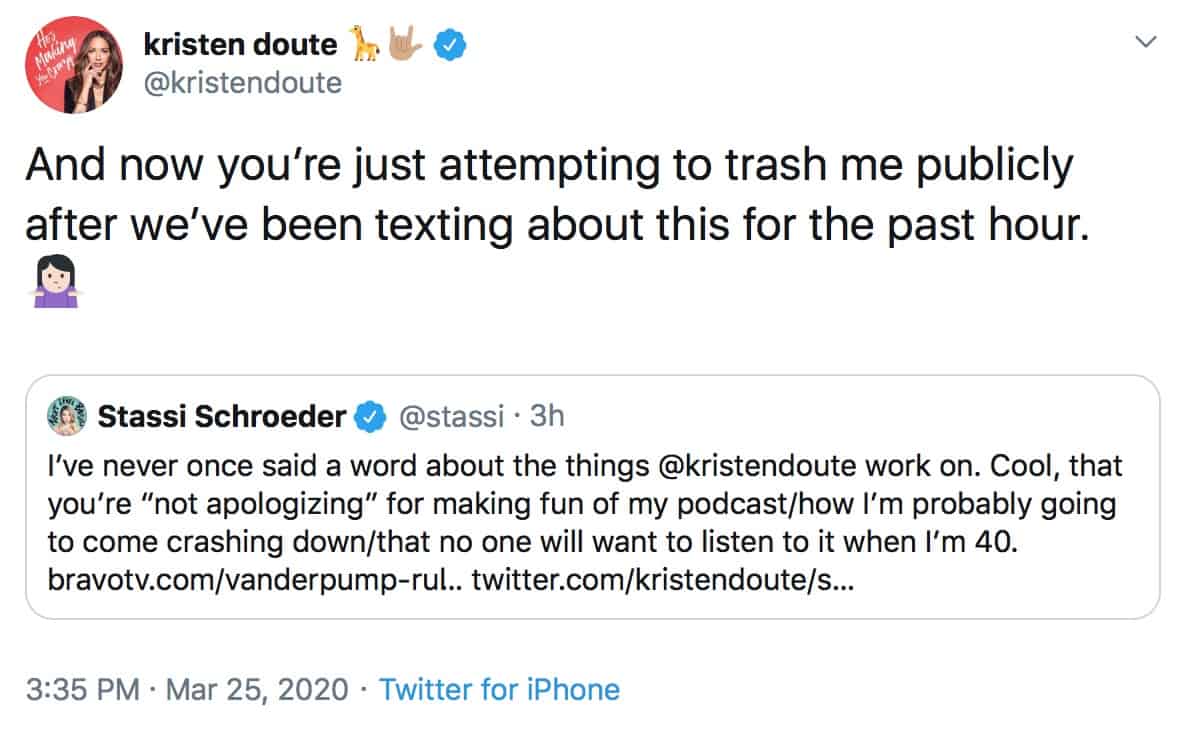 After seeing the drama play out, one fan suspected that Stassi had reacted to Kristen’s tweets because Kristen was continuing to talk to people who were trashing her and Katie, even though Stassi believed they had moved on after Kristen’s initial apology.

“And this is why we can’t get it together. When I texted you PRIVATELY, I never ASKED for a PUBLIC half a** apology. But ya.. you clearly still don’t understand why we are where we are today,” Stassi shared. 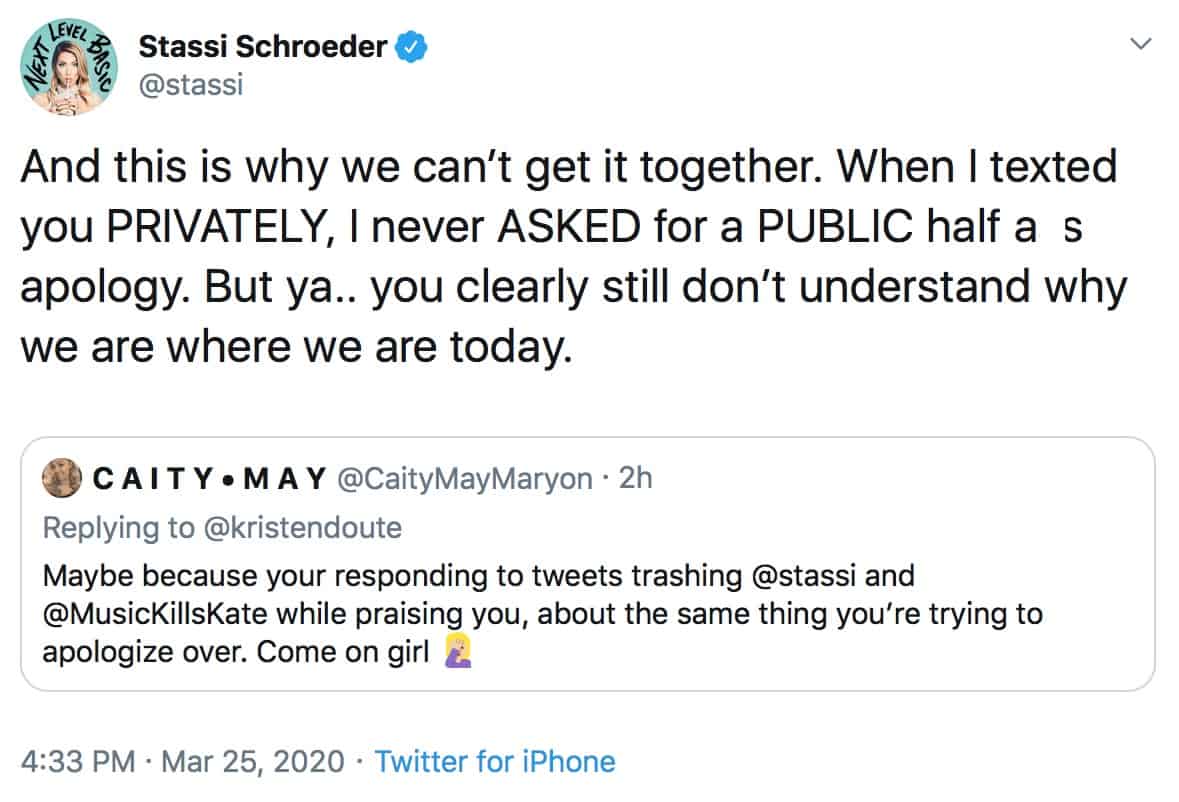 Stassi then admitted to being embarrassed about partaking in the online feud.