by Cynthia Cook May 13, 2020 84 comments
ShareTweetWhatsappPinterestRedditTumblrMailFlipboard

Thomas Ravenel is defending his ex-girlfriend and the mother of his two children, Kathryn Dennis, against some backlash she’s received for what was seen as “racist” and “white supremacist” behavior.

The mother of their children, Kensington, 5, and St. Julien, 4, came under fire recently for a heated message exchange she had with a Charleston activist, Mika Gadsden.

Kathryn, who was defending her friend, Katie Shields, from being called out for planning a Trump rally, fired back by seemingly taunting Mika — a black woman — with a monkey emoji. The “monkey” idea and image is a historically racist gesture toward black people and was taken by fans to be meant as such.

Kathryn quickly apologized, noting how “tone deaf” she was in seeing how her comments “could be perceived.”

Now Thomas — an avid Trump supporter — is defending his ex.

In a since-deleted tweet, the former politician stood up for Kathryn, defending her against the “racist” accusations fans were making against her.

“Say what you will about @KathrynDennis, she is not a racist,” Thomas wrote. “Some of her good friends are people of color and I’ve never, ever heard a racial slur come out of her mouth. She doesn’t even think about race or even consider it. This is a very unfortunate mistake.” 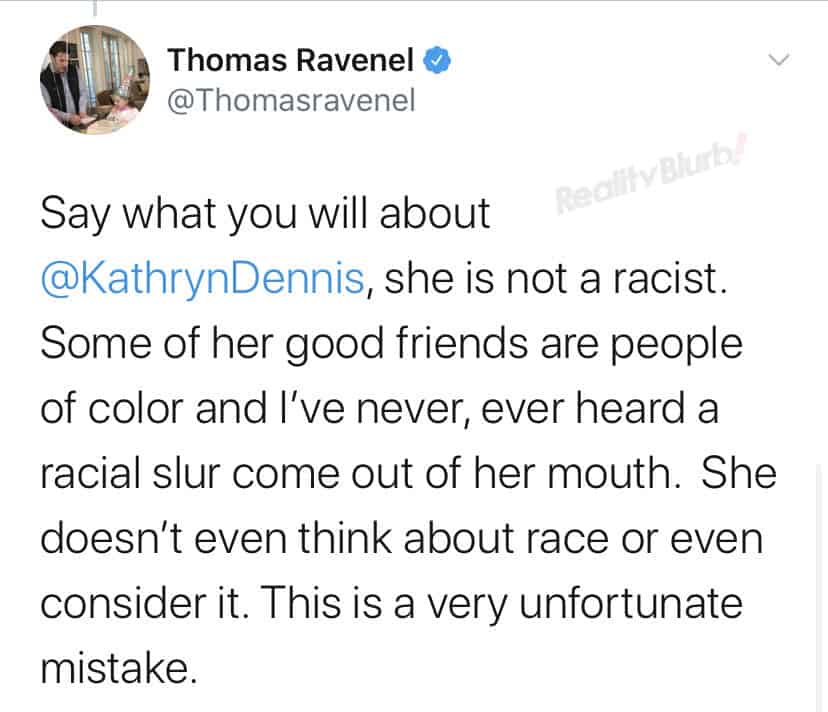 It’s enough to wonder why Thomas took down the tweet about his former partner. The two sparked rumors in the past few months about a possible reconciliation after photos of them together were posted to Kathryn’s own Instagram.

However, the former couple both insist they’ve just been cordially co-parenting. Thomas is also allegedly expecting a child with ex-girlfriend Heather Mascoe.