by Elizabeth May 15, 2020 210 comments
ShareTweetWhatsappPinterestRedditTumblrMailFlipboard 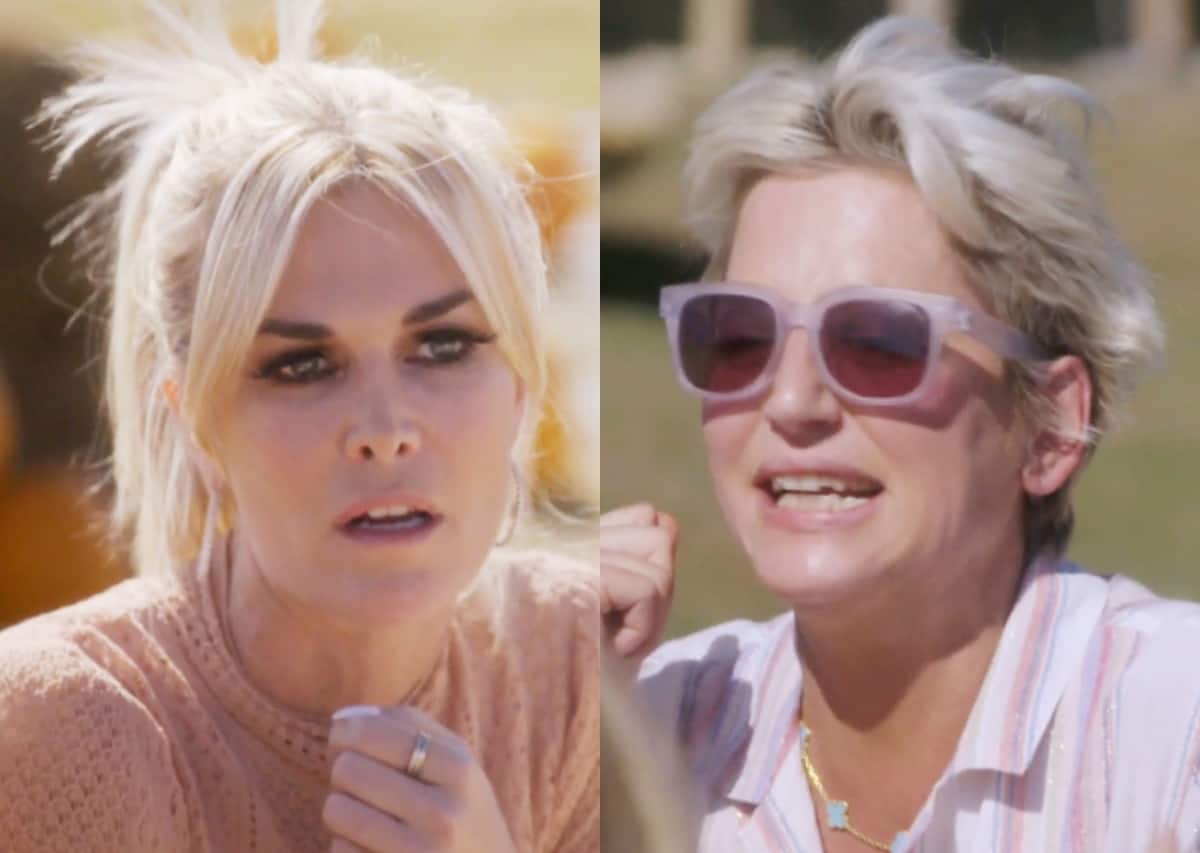 On this week’s episode of the Real Housewives of New York City, Dorinda calls it quits with John. Luann arranges a trip to an orchard and the ladies get lost in a corn maze?

Tinsley trains with her really creepy trainer, Martin. Why is she asking him for friendship advice? Does she really have an issue finding normal friends who don’t have the potential to break you in half and skin you? The trainer thinks Dorinda, aka Dorita, needs a good a** kicking. Okay, Tinsdale, aka Tinsley, get your sh** together and stop being a doormat for Dorinda to wipe her feet on.

Dorinda, Luann, and Leah meet up to chat. Tinsley is more like a tic-tac to Dorinda? Sorry, Dorinda, I don’t get your analogy. Luann thinks since Tinsley has an overbearing mother, she is reluctant to share too much in fear of being judged. BINGO! Is Dorinda auditioning to be the new Dale? I am sorry but being mean to Tinsley is like kicking a puppy. It is just cruel.

Sonja and Ramona meet in the park and all they can all talk about is the issue with Dorinda and Tinsley. They think Tinsley has what Dorinda craves. I agree with that logic. Now I get it, Dorinda just needs a tic-tac and a really rich boyfriend.

Luann comes over to visit Leah’s downtown apartment. Leah isn’t feeling well. Lu is not impressed with Leah’s accommodations. Leah doesn’t live like the 1% but she sure has a cozy place that I am sure costs more than a lot of our homes outside of NYC. The Countess doesn’t dine on coffee tables. Kier has the biggest bedroom since Leah doesn’t need a lot of space. Luann calls Leah humble. Is that code for poor?

Leah asks Luann about the drinking. She pretends she didn’t realize it wasn’t water. Productions shows the bush diving incident, which I will never get tired of watching. Leah is a person who doesn’t believe alcohol controls someone. I am sure AA has a different mentality about that. Lu thinks she is in total control of her situation. I am just going to put this out there. I personally don’t think Lu is an alcoholic but I do think that it brings out an anger in her that can be very destructive.

This episode shows everyone meeting in different areas of the park for some reason. Dorinda and Sonja meet up to discuss the Page Six article about her breakup with John. She thinks Ramona may have planted the story ? I can appreciate her honesty that John doesn’t satisfy her. Dorinda wants an indoor cat, not an outdoor tomcat. I think the problem may be that the tomcat John might be spraying the neighborhood…

Luann shares with Leah that John picked up the pieces when Dorinda lost Richard. She needed a rescuer and basically he was just a rebound relationship that lasted seven years. He also offered free dry cleaning !

Luann suggests to Leah that they should all visit an orchard. They need to take this sideshow on the road! Elyse joins the ladies on the car ride to the orchards. They have hayrides, pumpkin patches, and a corn maze. It sounds like a great fall-themed activity at another winery…

Sonja mentions she is going to pass on the wine and have an alcohol-free healthy day. Talk about premonition! They decide to start the day with breakfast wine. Dorinda comes out with a ginormous wine glass. What a waste of a really beautiful day with this crew of malcontents. Elyse, the instigator , has to ruin the mood by asking about John. Luann is relieved she didn’t have to be the bad guy asking about the breakup.

Dorinda admits she has to stop using John as a crutch. She needs to mourn Richard and be alone for now. Dorinda takes that moment to lash out at Tinsley again, saying her gum lasts longer than Tins’ relationships? These digs are so far out of left field that it leaves you to wonder what is happening behind the scenes with these two? Does she see the young Dorinda in Tinsley and everything she missed out on?

Dorinda calls Tinsley invisible. Okay, if that is true then why does her presence provoke you? It is so bizarre how these two are going at it. The other ladies are just glad she isn’t going after them. Did you know that Dorinda can’t edit herself to dumbness? She really needs an editor since her communication skills are really lacking and misdirected. When she is upset, Tinsley’s voice goes to high decibels and it makes her lose credibility. Take a deep breath, Tins, and let this nastiness roll off your Fendi-covered back. You are finally getting everything you want with Scott. Don’t let Dorinda rain on your parade. She leaves the table in tears with Luann trying to comfort her.

Elyse is afraid of Dorinda and won’t poke the bear. Leah determines that Dorinda and Tinsley have nothing in common. I don’t agree with that at all. She can’t fathom why all of the pain and loss of Dorinda’s has to be shouldered by Tinsley? Dorinda does admit she was an alcoholic after losing Richard but I still think where there is smoke there is fire… Maybe she is the one who needs help, and get a group discount and take Ramona and Sonja with you!

Tinsley has had to resort to talking to herself. She thinks it is important whether your hair is curly or straight! Leah suggests climbing trees for therapy. Bravo, Tins, for going for it! Luann grabs them to go on the hayride. Sonja is already trashed and hitting on goats and the proprietor?

Luann tells them they are really going through the corn maze. It reminds me of that old movie, Children of the Corn. Spooky, especially with this group! Can you imagine being stuck overnight with them in the maze? Freaking frightening, I tell you! Those corn kids have nothing on these ladies!

Ramona, Dorinda, and Elyse are on one team. Dorinda slurs she is doing some recog-ni-zies. Sonja, Tinsley, Lu, and Leah are on the other team. I am Team Lu. Sonja is trashed and putting corn in her purse. They are wandering aimlessly through the maze. Tinsley screams when she sees Leah and Sonja with their pants down peeing in the maze. Tins, they are just watering the crop, no worries! Leah prefers “turn up Sonja” over Ms. Morgan since she is a lot more fun. Me too!

I am so glad Luann, Sonja, Leah, and Tinsley completed the maze first. Dorinda is such a loose cannon and filling that cannon with alcohol is disastrous. It is very difficult to navigate a friendship with someone like her.

Ramona tells Dorinda she and Mario outgrew each other. The fact is she grew older and he wanted a much younger model. The cheese is making Sonja’s pu**y water. She is looking to multi-purpose it as a lubricant. Sonja claims she got laid the night before. TMI.

Leah likes di*k pics since she likes to pre-order before making her selection. Luann isn’t into the online thing — she prefers to check it out in person. Sonja says Tinsley will tolerate a small di*k for a bracelet. I think there is some projection going on there, Sonja! Luann finally decides Sonja has done enough to warrant a claim of sexual harassment here and drags the group of drunks out of this establishment!

Next week, Dorinda is being called on the carpet for her bad behavior. It is about time. Enjoy your weekend and take care!